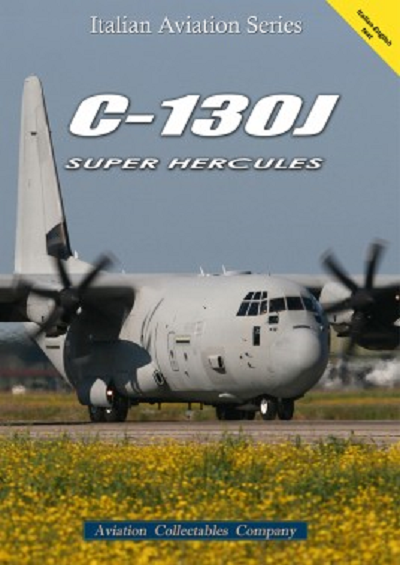 The Lockheed Martin C-130J Super Hercules is a four-engine turboprop military transport aircraft. The C-130J is a comprehensive update of the Lockheed C-130 Hercules, with new engines, flight deck, and other systems.

The Hercules family has the longest continuous production run of any military aircraft in history. During more than 60 years of service, the family has participated in military, civilian, and humanitarian aid operations.

The Hercules has outlived several planned successor designs, most notably the Advanced Medium STOL Transport contestants. As of February 2018, 400 C-130J aircraft have been delivered to 17 nations.
​THE BOOK:

Aviation Collectables Co. is based in Italy.

This book is in Italian and English text.

The cover art shows a C-130J with serial no. 46-48 on its side running up its engines at Pisa airport.

The back cover shows a C-130J in flight posed against a red, white and green target.

There are 133 color photos of C-130 J’s in the book (including the cover shots), 7 of the photos are inside the Lockheed factory, there are 4 color illustrations of posters about the aircraft, 5 photos of the cockpit interior, 31 photos are the walk-around type showing various parts of the plane, there are 6 color side profile illustrations, a document showing the emergency exit locations, a photo of the box art of the Italeri 1/72nd scale model kit of the C-130J and two photos of this model made up partially and complete.

This book will be of interest to both modelers and aviation enthusiasts alike,

I want to thank Casemate Publishers for this review sample. They are the North American distributor of Aviation Collectables Company books and all their titles can be seen on Casemate’s website at:
www.casematepublishers.com