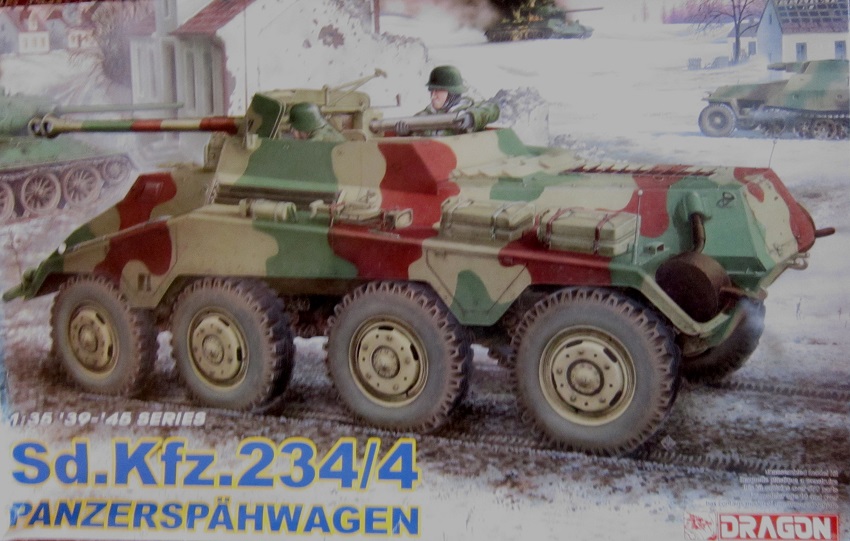 The Sd.Kfz. 234 (Sonderkraftfahrzeug 234, or Special Purpose Vehicle 234), was a family of armoured cars designed and built in Germany during World War II. The vehicles were lightly armoured, armed with a 20, 50 or 75 mm main gun, and powered by a Tatra V12 diesel engine.[3] The Sd.Kfz. 234 broadly resembles the appearance of Sd.Kfz. 231 (8 rad).

The final variant produced was the Sd.Kfz. 234/4, which replaced the L/24 gun with the 7.5cm L/46 PaK 40. This was yet another attempt to increase the mobility of this anti-tank gun; however the 234 chassis was stretched to its limits, and it carried limited ammunition (twelve rounds) due to lack of storage space. This variant was manufactured from the end of 1944 to the end of hostilities in 1945.

The box art shows a Sd.Kfz. 234/4 advancing  with a second Sd Kfz. 234/4 through a wrecked village with 2 knocked-out Soviet T-34 tanks in the background. Two crewmen are shown in the fighting compartment. Both are wearing steel helmets and camouflaged parkas that reverse to white. One is aiming the gun and the other is loading it. The two vehicles are both in a base of earth yellow with wide bands of dark green and red brown. No markings are shown on either of them.

On one corner of the box art it says that kit contains an unassembled model kit containing over 570 parts and it is intended for modelers over 10 years of age.

One side panel has 2 small color profiles of the Sd.Kfz. 234/4 in variations of the pattern shown on the box art. This is followed by an illustration of the PE fret . the turned aluminum gun barrel, the three decal sheets and newly tooled jerry cans in the kit. CAUTIONS concerning the kit are in 6 languages, including English and the kit is for modelers over 10 (repeated again) but unsuitable for children under 3 due to small sharp parts in multiple languages. The kit’s copyright date is 2006, followed by DML Dragon’s street address in Hong Kong, China and their web site address.

The other side panel and the bottom of the box are plastered with 34 black and white illustrations of features in the kit. This seems to be a common practice on DML boxes any more.

The instructions consist of a single sheet that accordion folds out into 10 pages in 7 ½” x 13 5/8th” format.

Page 1 of the instructions begins with a black and white repeat of the box art. It is then said that the kit project was supervised by Hiroshima Takada and the technical drawings were provided by Shin Okada. The bottom of the page has the parts trees illustrations. A  few parts are shown blued-out here, meaning they are excess and not needed to complete the model.

Page 2 begins with ATTENTIONS about the kit in 6 languages, including English, followed by international assembly symbols explanations and a listing of GSI Creos Corp. Aqueous Hobby Colour, Mr. Color and Model Master brands of paints, suggested to use to complete the model, in the 6 languages. The bottom of the page has the first 3 assembly steps.

Page 3 through 9 gives a balance of a grand total of 28 assembly steps.

Page 10 is the painting and marking illustrations. Two 4-views are shown. Both are in the overall earth yellow base color with broad bands of dark-green and red-brown. Niether shows any markings at all. Which is very very strange given the 3 decal sheets included in the kit.


Both are labeled as being from unknown units. One on the Western Front 1945 and the other at Prague 1945. DML should have done a little better here and shown some markings. At least the German cross.

At the bottom of the page is Dragon’s office address in Graz, Austria, the copyright date of 2006 again and decal application instructions in 6 languages, including English. 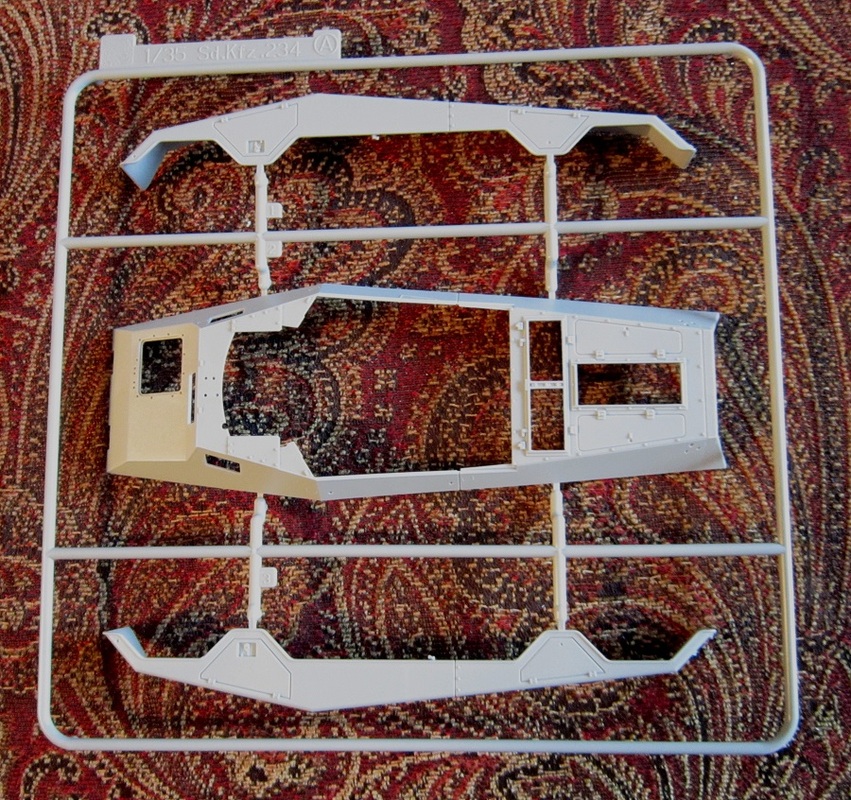 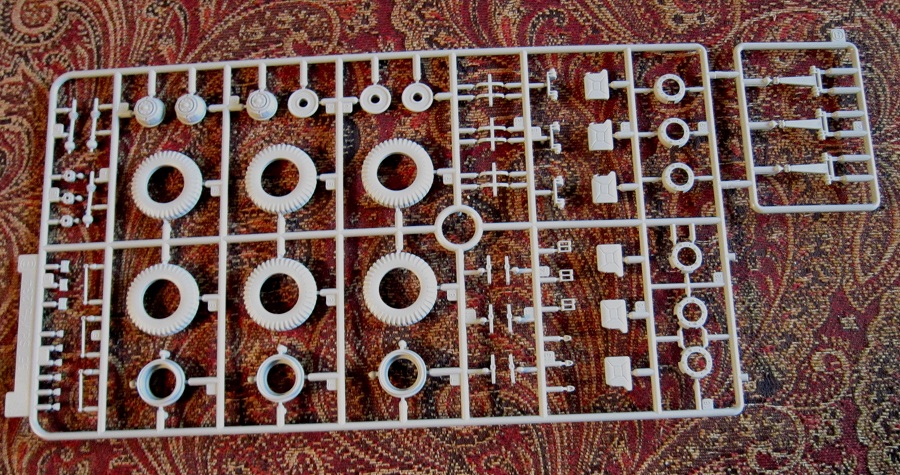 A grey tree that is labeled B tree holds the molded main gun, recoil slide, mount and various parts for detailing the gun. 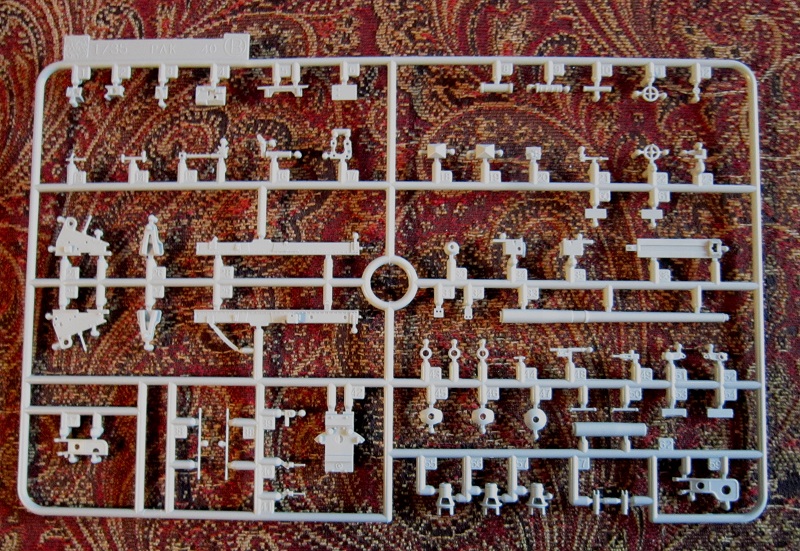 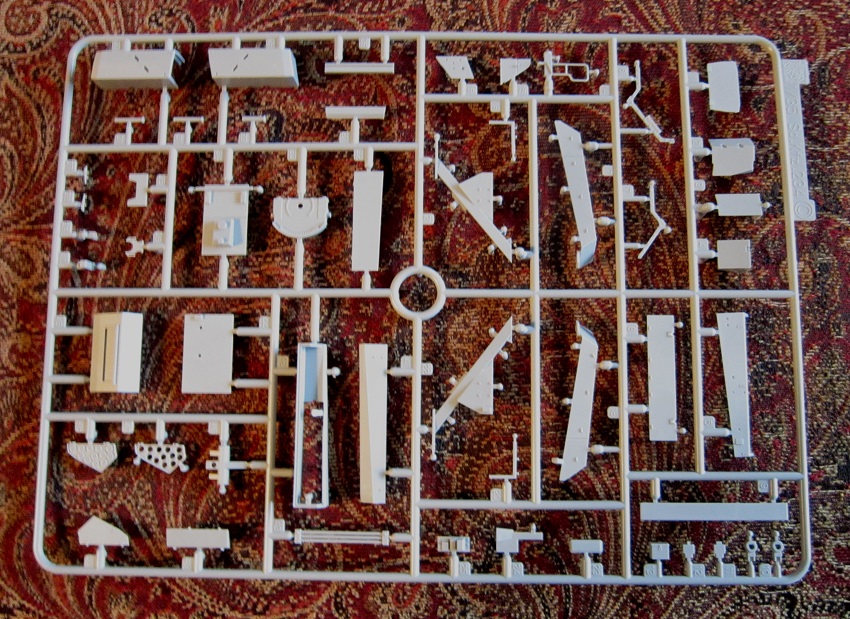 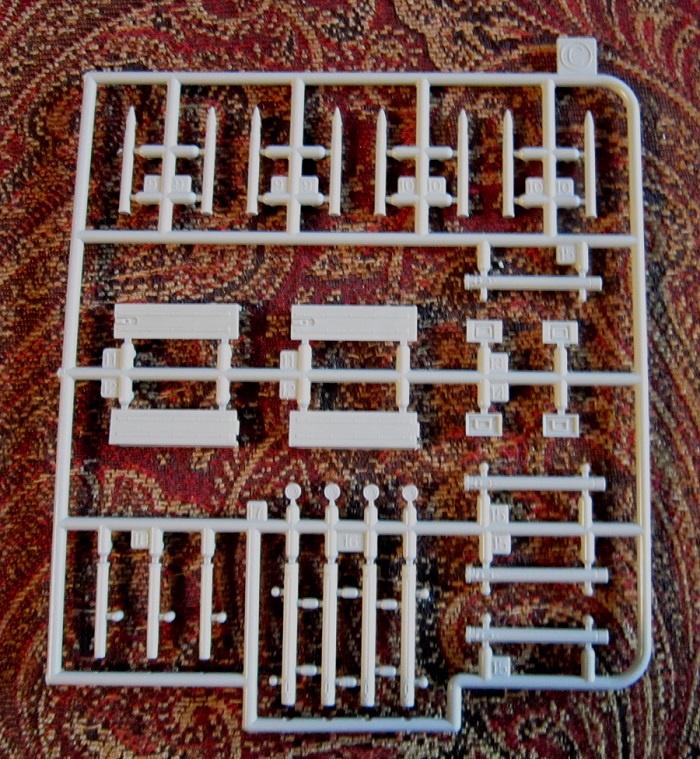 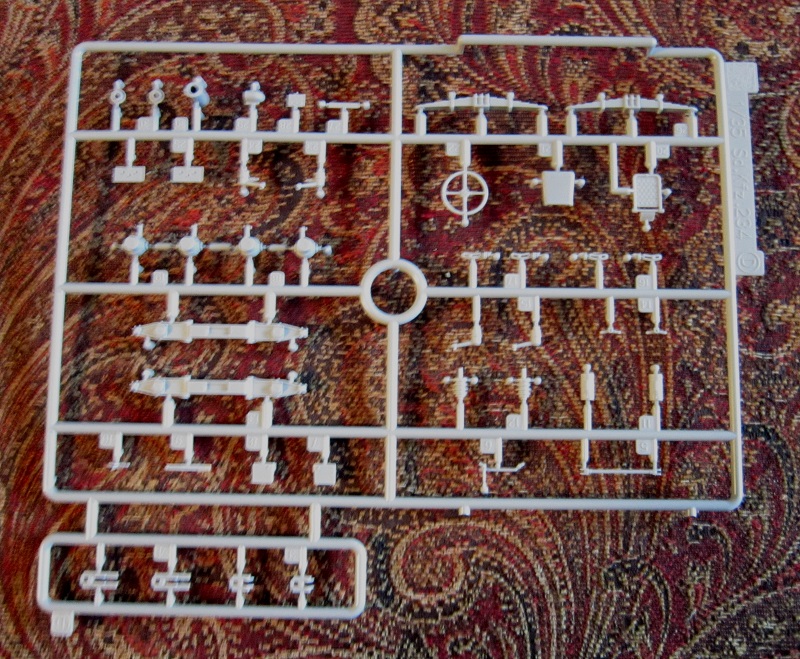 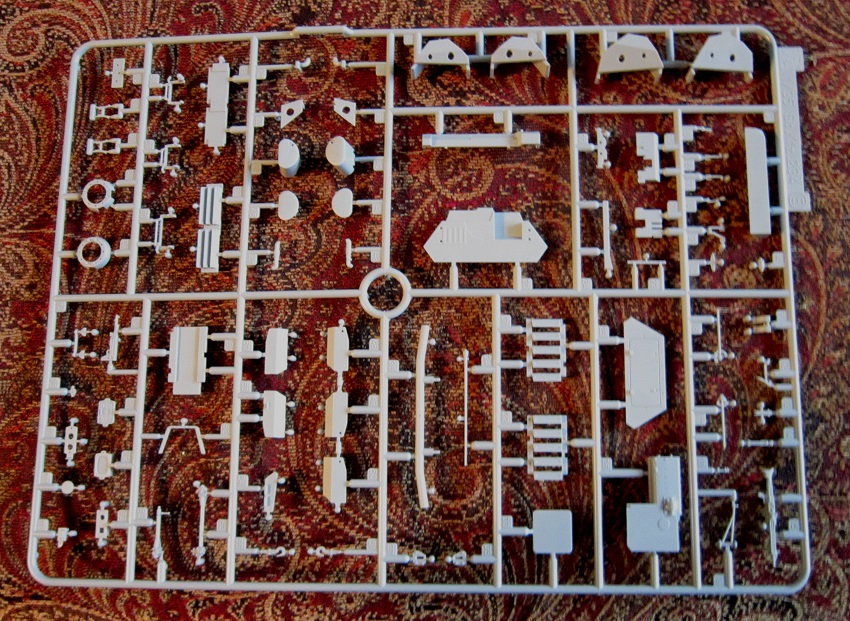 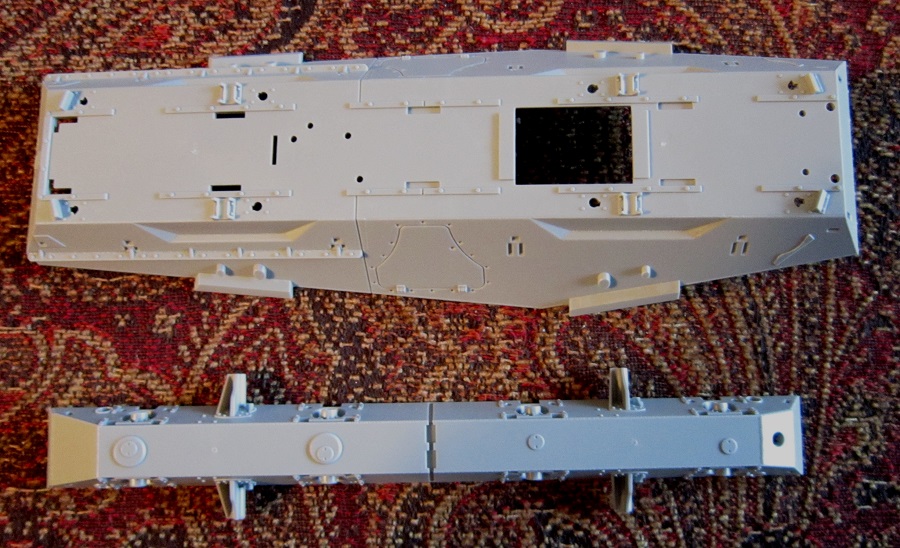 Letter MA is one of the brass PE frets. It holds jerry can center sections etc. (16 parts) 1 part is excess. 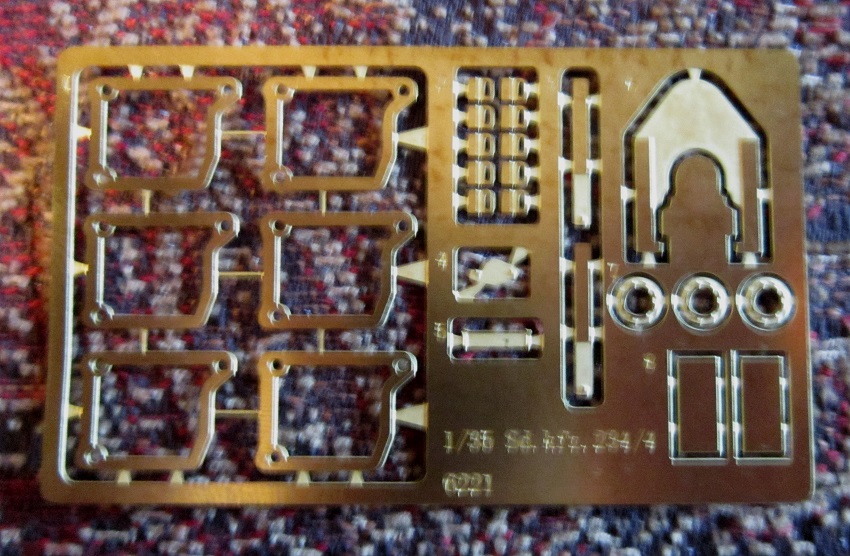 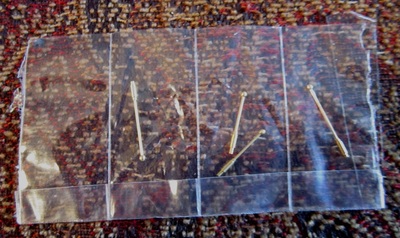 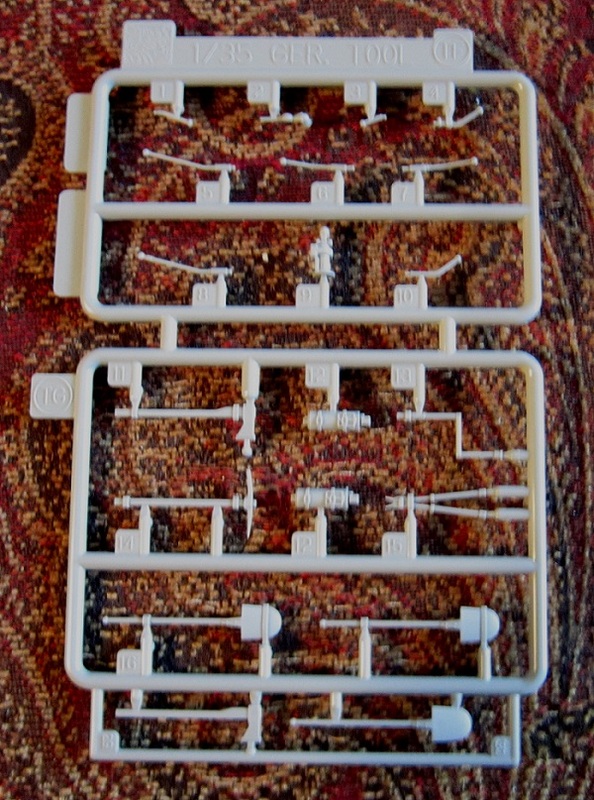 Small grey letter TH holds 14 parts. And include the 2 part jack shown that is blued-out on the instructions as being excess and the head lights and tail lights. 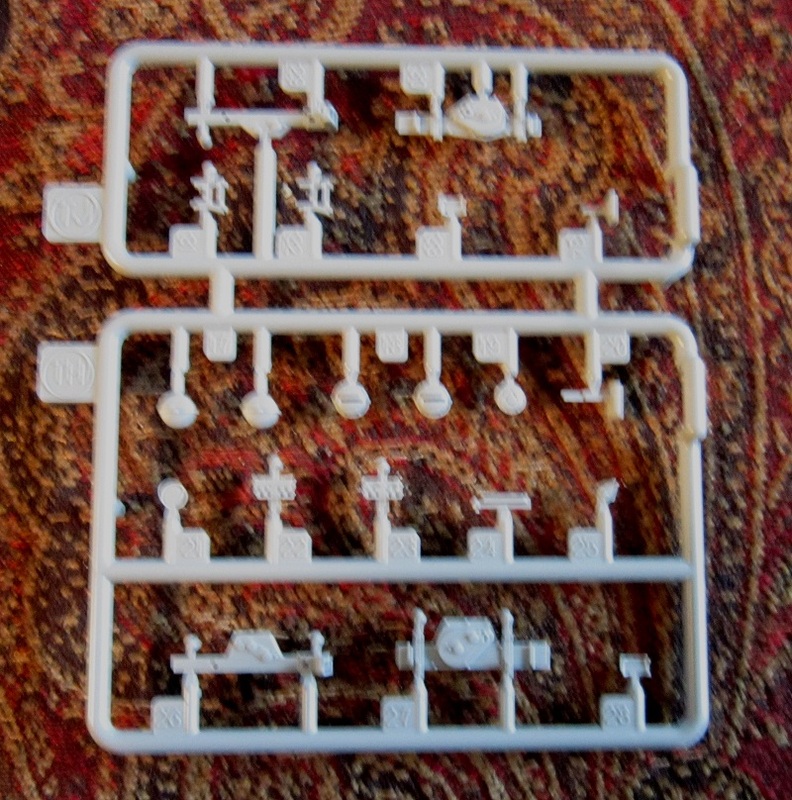 The smallest decal sheet has some personal marks on it of the word BLUCHER and a green shamrock, German crosses and a license plate number etc.

The next larger decal sheet has vehicle information sentences on it.

The largest decal sheet has license plate numbers and plates that you can construct your own number on. 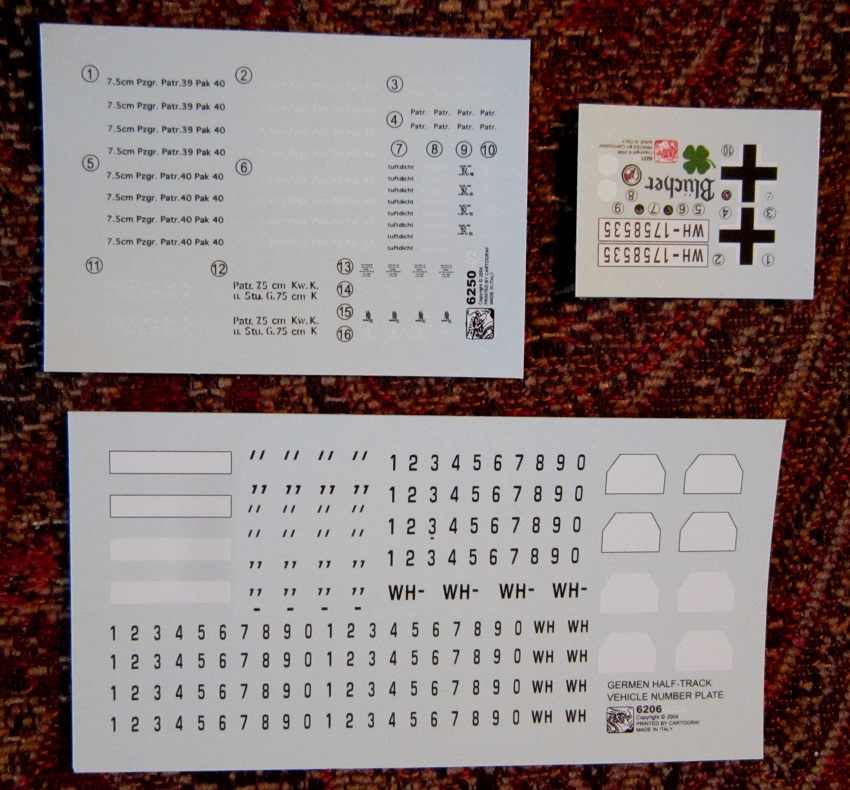 Parts are all nicely packed in numerous cello bags and some of the smaller trees and the brass fender poles and aluminum barrel are taped to a stiff card.

Small grey letter TJ tree holds 6 more parts that I don’t know what they are. 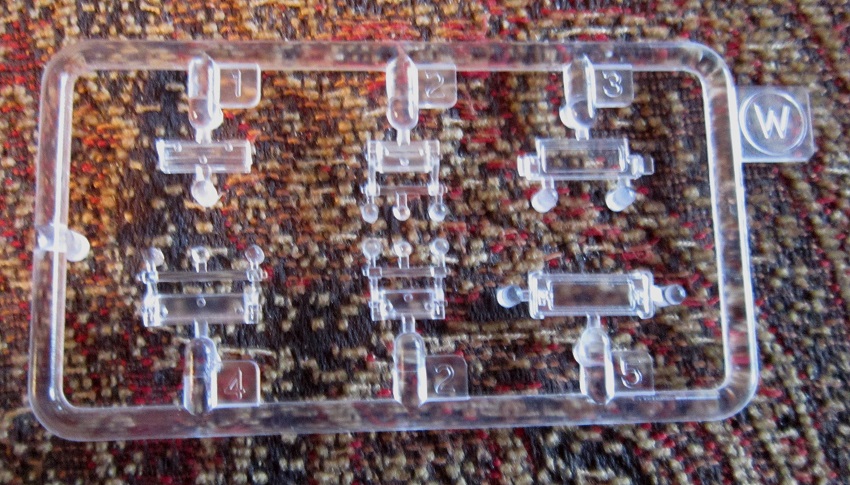 There are no crew figures in the kit and with an open-topped turret it sorely cries out for some.

This is a very complicated kit with the large amount of parts. I only recommend it to experienced modelers. It is not for a beginner nor a week-end project.

I bought my kit at 50% off at a store that was very overstocked with model kits that were not moving for them. Nice to get a bargain once in a while.