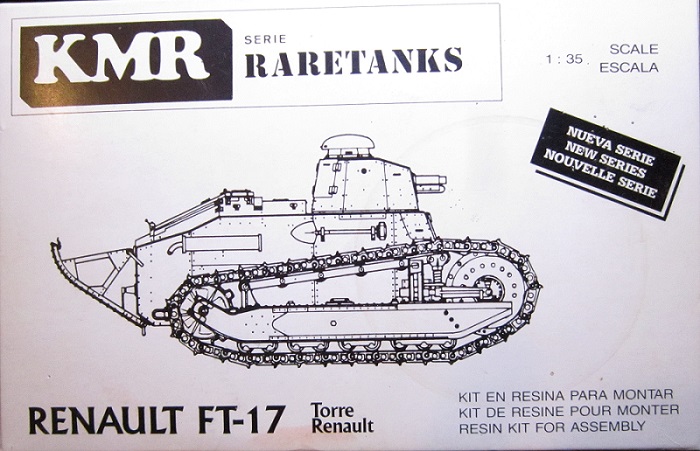 The Renault FT was a French light tank produced from 1917. It was the first operational tank with its armament in a fully rotating turret, and its configuration with the turret on top, engine in the back and the driver in front became the classic one, repeated in most tanks until today; indeed so familiar to modern eyes we can now only with difficulty understand its once-revolutionary nature. On 5 February 1920 Estonia purchased 9 vehicles from France.

Considered to be the first modern armored car, the FT-17 still boasts an unequalled combat record. Following its first operational actin on the 31st of May 1915, during the Great War, it intervened in the RIF skirmishes between France and Spain, and in the Alhucemas landing during the Moroccan War of 1925. The Spanish Civil War would, once again, see this armored car in action, employed by both sides right up to the end. When WWII broke out, more than 1,500 examples were still in service with the French Army. Many examples were captured by the Germans and were subsequently used for training and in security and anti-partisan warfare.

More than 15 countries employed or produced the model under license.

Used in the Second World War by the Dutch

The Dutch military had one French Renault FT-17 tank. When Nazi Germany invaded the Netherlands, the Dutch sent the tank forward to battle the German Panzers. Unfortunately, before the tank could see battle, it got stuck in a ditch and was abandoned.

KMR was a model company based in Spain that did resin armor kits. I believe they do not exist anymore. This kit came out in 1987 I think.

This kit came in a very sturdy small chalk white tray and lid box that was unsealed and not shrink-wrapped. The box art shows a line drawing of a FT-17 in profile. It says this was a new series back then and that it is resin.

A side panel of the box repeats the profile again and a one-paragraph history of the FT-17 in Spanish.

This kit contains 3 sealed cello bags of tan resin parts, a cello bag with trees of black plastic rivets and the instruction sheet 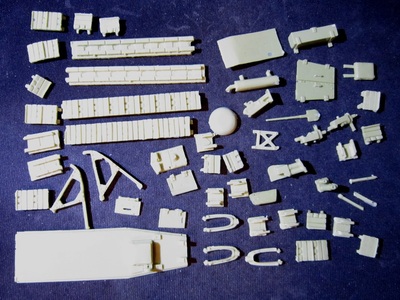 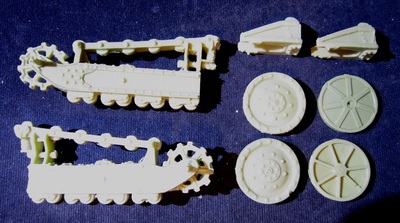 The instructions consist of a single sheet in 8 ½” x 12 ¼” folded twice to fit the box and printed on both sides.

One side begins with the line drawing profile repeated, followed again by the one-paragraph history of the FT-17 in Spanish and general construction instructions also in Spanish. The rest of the page has 8 exploded drawings for assembly. Two of the drawings are for turret types that are not the Renault

one in this kit: a Berliet and a TSF turret.

The other side of the instruction sheet has a one-paragraph history of the FT-17 in French and English and assembly instructions in the two languages. Below this is a line drawing of the top of the FT-17. On the right side of the page there are three 2-views of marking and painting schemes. However, no markings are shown, nor is there a decal provided in the kit. .

The first scheme is one used in WWI in 1918. It is in bands of sand, ochre and dark green. This is the one with the Renault turret that is this kit.

The second scheme is one used in WWII in 1939 to 1945. It is in bands of sand and ochre. This is the one with the Berliet turret.

The third scheme is one used in 1925. It is dark grey with sand wave pattern. The sand is outlined in black. There is a white banner on the side of the turret with the black  word INFANTERIA N0. 1 on it. This is the one with the TSF turret.

No divisions are mentioned.

There are no crew figures included or any clear parts. The kit does have some nice interior details though in the form of a driver’s seat, shift levers and foot pedals. A dash board would have been nice though.

I am going to dispense with my usual habit in my reviews of naming everything. This time I ask readers to just look at the pictures of the parts. The parts are very nice because there are no pour spouts to remove from them, which is usually the case with resin kits.

The tray of the box is divided into two compartments with a wall of cardboard. The hull top and turret part are on one side of the wall and the rest of the parts on the other side.

I got this kit by trading kits with a guy in Spain years ago.