Kit no. F191
By Ray Mehlberger

The Bristol Type 156 Beaufighter (often referred to simply as the "Beau") is a multi-role aircraft developed during the Second World War by the Bristol Aeroplane Company in the United Kingdom (UK). It was originally conceived as a heavy fighter variant of the Bristol Beaufort bomber. Upon its entry to service, the Beaufighter proved to be well suited to the night fighter role, for which the Royal Air Force (RAF) initially deployed the type as during the height of the Battle of Britain, in part due to its large size allowing it to accommodate both heavy armaments and early airborne interception radar without major performance penalties.

As its wartime service continued, the Beaufighter was applied to many different roles; receiving the monikers Rockbeau for its use as a rocket-armed ground attack aircraft, and Torbeau in its role as a torpedo bomber against Axis shipping, in which it came to replace the preceding Beaufort. In later operations, it served mainly as a maritime strike/ground attack aircraft, RAF Coastal Command having operated the largest number of Beaufighters amongst all other commands at one point. The Royal Australian Air Force (RAAF) also heavily used the type in the maritime anti-shipping role, such as during the Battle of the Bismarck Sea.

This kit came in a tray and lid type box that has the tray hinged to the lid. It was not shrink-wrapped, but held shut with strips of tape.

The box art shows a Beaufighter attacking a U-boat.

The aircraft is in at wave pattern of dark green and grey over a sky type S undercarraige. The fuselage code is black ED (roundel) L. It has a red serial no. NV427 under the elevators.
One side panel of the box has 4 color box arts of other aircraft kits that Frog marketed: a Me-410, a Avro Shackleton, a Westland Lysander and a Lockheed Lightning. No kit numbers are shown and I assume they are all to 1/72nd scale.

The other side panel lists features of the kit in 6 languages, including English. Each is labeled with a color illustration of the roundels or marks used by the countries that speak those languages.

There are 8 more color box arts of aircraft kits around the sides of the kits tray: a Hawker Hurricane, a DeHavilland Mosquito, a Avro Lancaster, a Macchi MC202, a Fokker D21, a Northrop Black Widow, a Douglas Bomber (type ?), and a Hawker Sea Fury.

The bottom of the box has three 2-views of schemes:

2. A F6C fighter-bomber version of P.O. DW. Schmidt, No. 227 Squadron, Malta 1942. In a wave pattern of dark-green and earth over light grey undercarraige. It has the fuselage code in grey of (roundel) Z and a serial no. EL236 in red under the elevators.

3. A TF10 version of Coastal Command No. 235 Squadron. In a wave pattern of dark green and grey over a sky type S undercarraige. The fuselage code in black is EO (roundel) L and a red serial no. NV427 in under the elevators. 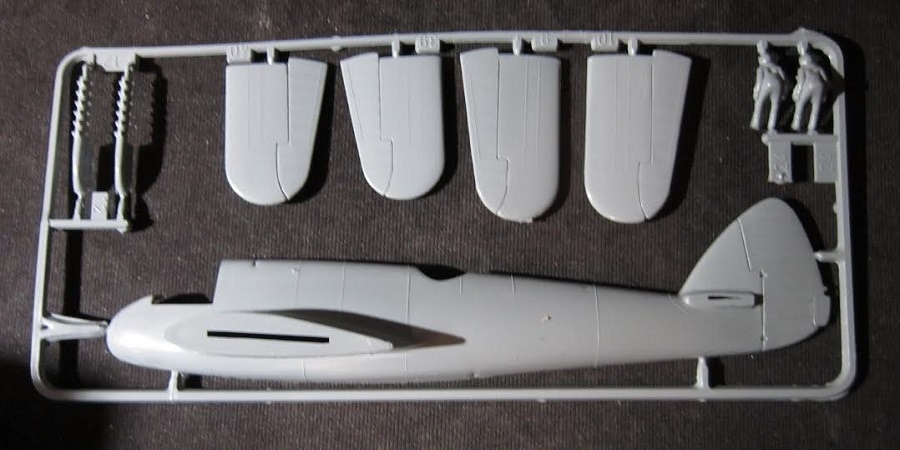 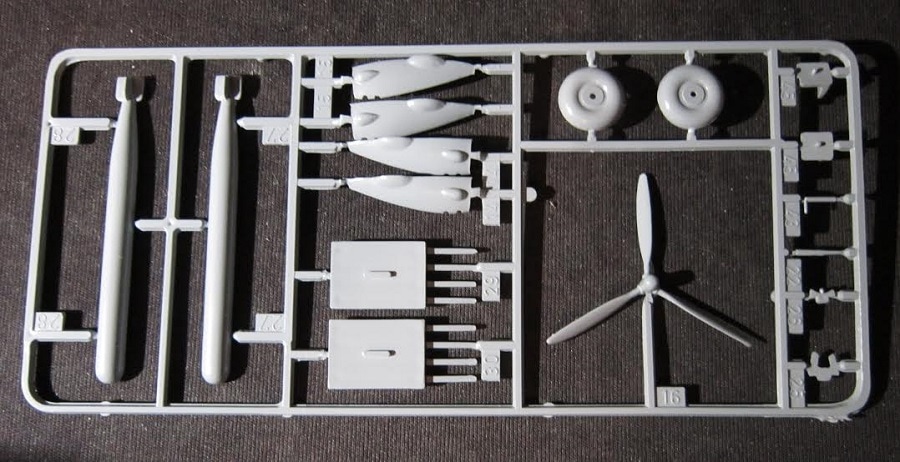 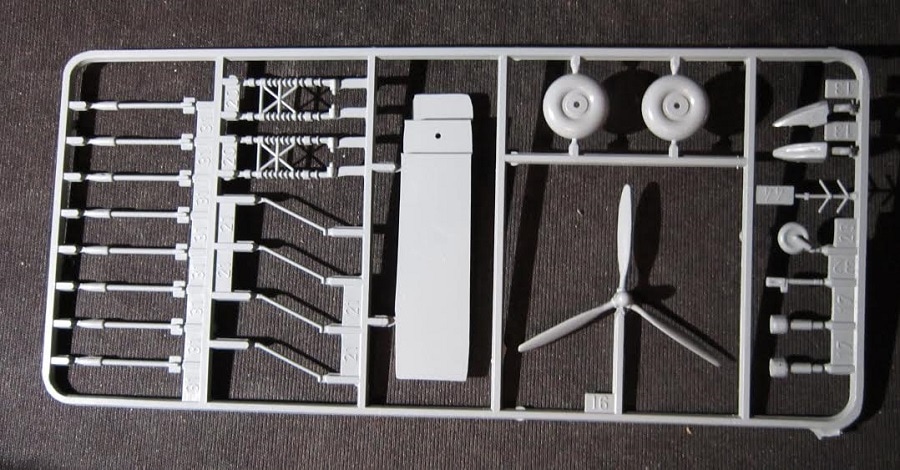 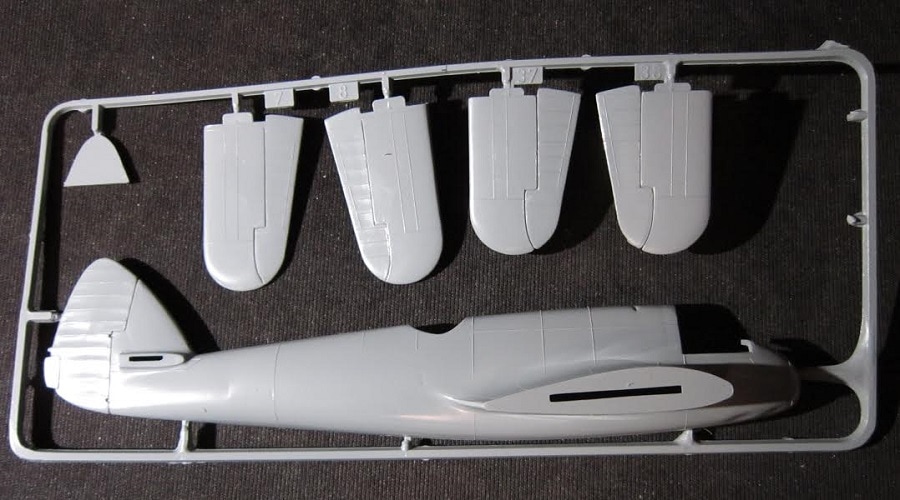 The engine and cowlings were loose in the box. 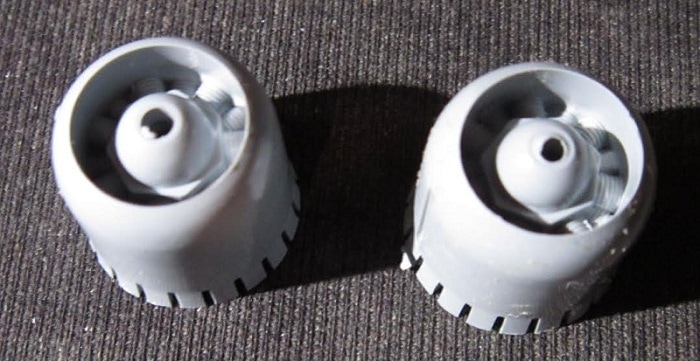 ​The clear parts tree holds the cockpit canopy and other parts (4 parts). 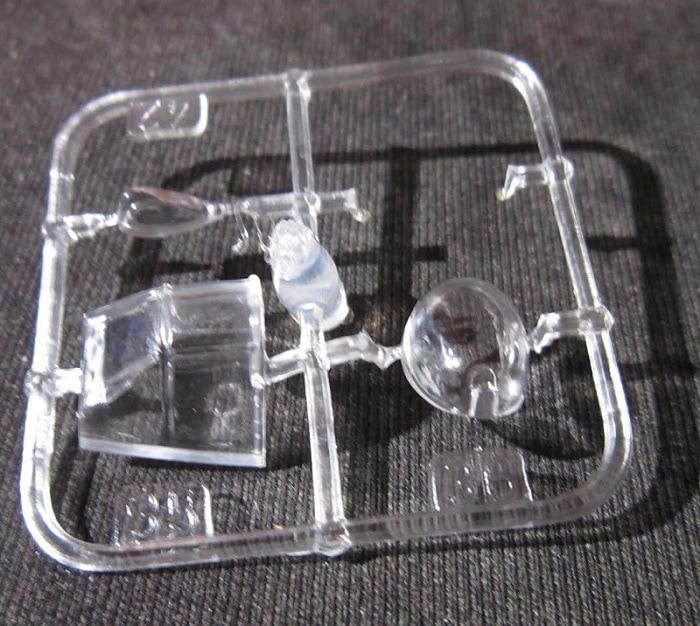 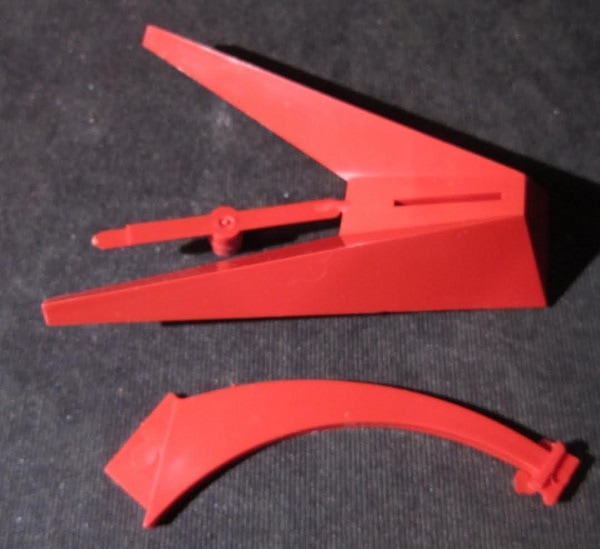 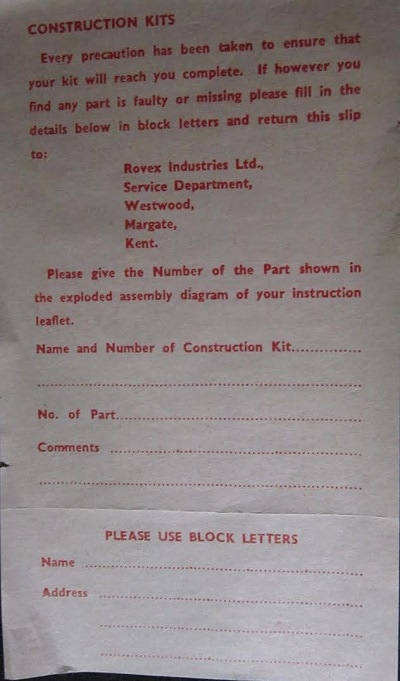 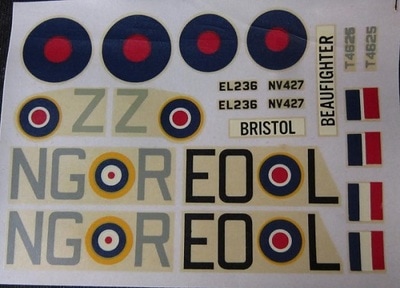 ​The trees are not alphabetized or illustrated in the instructions. However, they do have part number tabs next to the parts on the trees.

The instructions consist of a single sheet printed on both sides in 9 1/2" x 12 1/2" page format.
The face side of the instructions begins with international assembly symbol explanations in 7 languages, including English over 8 assembly steps.

The reverse side of the instructions has TOP MODEL TIPS in English, German, Italian, French, Swedish and Dutch, with illustrations showing how to do those tips.

This is a nice older kit.

I purchased my kit years ago at a local hobby shop that went out of business.