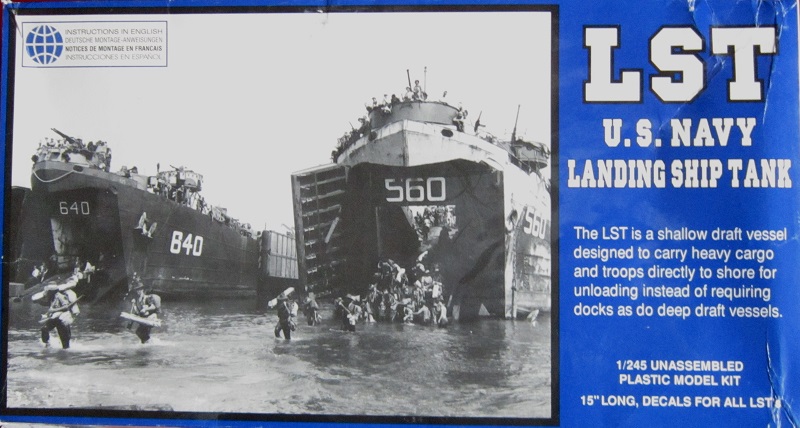 In Box Review of the Naval Base 1/245th Scale

Thirteen years ago, back in 1994, The Naval Base brand acquired Lindberg molds for the LST. Prior to that time, Lindberg sold the kit as the “D-Day Invasion LST”. The kit is out of production, but I saw several offerings of it in the Lindberg box on eBay, so it can still be found.

The keel of the first LST was laid down on June 10, 1942. There were 1,051 built during WWII. They were 328 ft. long and had an average crew of nine officers and 110 sailors. The LST’s main function was to transport tanks, cargo and men to battle areas. These ships carried anti-aircraft guns in the front and rear. The LST’s draft in water was shallow, permitting landings close to shore and beaches for rapid unloading of equipment. The LST was a rugged ship – only 25 were ever lost to enemy action and another 13 to weather, reefs or accidents. Their speed was a slow ten mph, hence the nickname “Low – Slow – Target”. The LST served in all major conflicts in WWII.

The kit comes in a un-shrink-wrapped  tray and lid type box, held shut with tape. This box is way too big for the contents. Over half its width is void! The Naval Base could have sold the LST kit in a much slimmer box. The box art is an actual photo of two LSTs unloading troops.

The kit contains a large and blousy cello bag, sealed with one strip of Scotch tape. It holds four trees of parts, the main deck part and the full hull piece. These are molded in medium gray colored plastic. A handful of parts have broken off these trees in my kit, due to friction of the trees rubbing together.

There is a sheet in the kit that begins with decal application instructions, followed by a phone number to contact a LST Veteran’s special interest group and a price listing for 1/245th scale white-metal tanks, trucks and jeeps sold separately by The Naval Base back in 1994.

The instructions are a single sheet that accordion folds out into six pages.

Page one begins with a black and white illustration of the kit made up. Arrows in this illustration point to where you apply the bow number and where the American flag on the decal sheet goes on the rigging. It says the hull bottom is red, but no other colors are called out. This is followed by a short history of the LST and The Naval Base’s street address and phone number in Cedarhurst, NY.

Pages two through six give a total of 14 assembly steps. The bottom of page six has an illustration of an LST that has arrows pointing to and naming all the parts of its anatomy.

The large decal sheet completes the kit’s contents. It has the numerals 0 through nine in white on it, in two sizes, and the American flag. You compose the three digit hull number from these numerals to suit yourself to the number you prefer. (ships number 560 & 640 are pictured on the box art. A photo of number 125 is shown on a side panel).

A disappointment with the kit is that the bow doors are molded shut. There is no interior parts to go inside them, if they were molded separately. It would be a major scratch-building project to add these features. Sure would have been nice if Lindberg had provided these details when they made the molds.

Another sad thing is that I’m almost positive that The Naval Base is out of business. That means that the white metal vehicles for a cargo load on the LST are no longer available…sigh.

The kit cries out for something on its deck.

I recommend this kit to modelers of U.S. vessels. It makes up to be 15” long in this scale.

Kit was courtesy of my wallet back in the 90’s and purchased at my local hobby shop then. 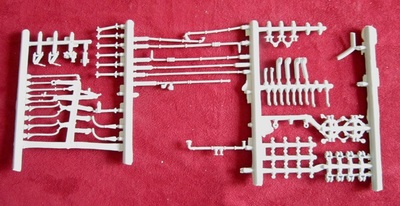 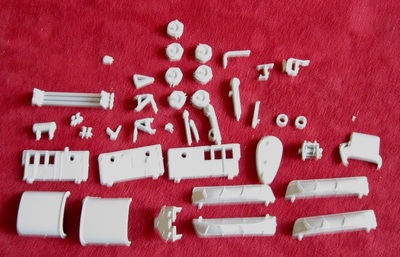 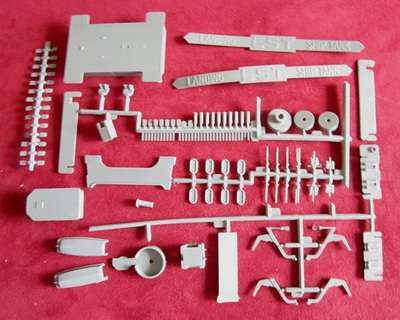