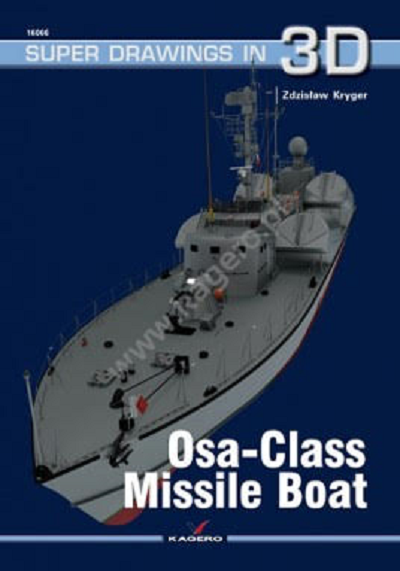 The Project 205 Moskit (mosquito) more commonly known by their NATO reporting name Osa, are a class of missile boats developed for the Soviet Navy in the late 1950's. Until 1962 this was classified as a large torpedo boat.

The Osa class is probably the most numerous class of missile boats ever built, with over 400 vessels constructed between 1960–1973 for both the Soviet Navy and for export to allied countries.

"Osa" means "wasp" in Russian, but it is not an official name. The boats were designated as "large missile cutters" in the Soviet Navy.

Kagaro is based in Lublin, Poland.

It has a pair of cardboard glasses that have one red lens and one blue lens, for viewing the 3D drawings.

The reverse side has drawings of the antenna of the MR-104 Rys AK-230 fire-control radar station, the AK-230 twin-30 mm gun, the P-15 missile at the bottom of the hull, the start engine visible and antenna of the Nichrom identification Friend or Foe system, to no scale.

Counting the front and back covers, there a 77 color 3D walk-around type illustrations showing every inch of the Osa.

Text is all in English.

Merit International brand makes a kit of the Osa in 1/72nd scale and it is available at 6 sources overseas on the net. It has a copyright date of 2014.

This is neat book, with the extras of masks and fold-out line drawings.

It will be of great interest to naval historians and modelers alike.

Casemate is the N. American distributor of Kagero books. All Kagero titles can be seen on Casemate's web site at:
www.casematepublishers.com