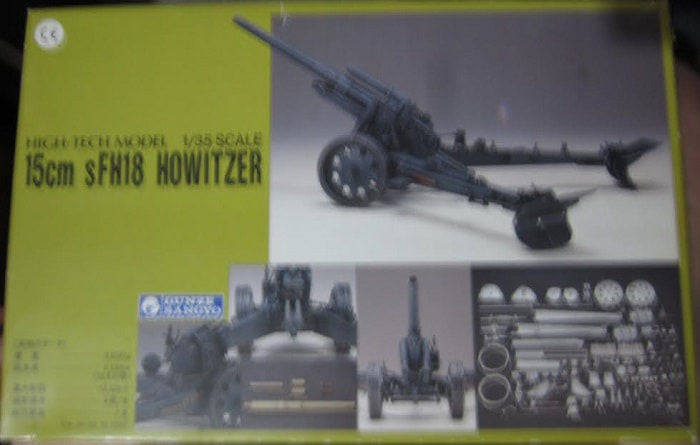 OUT OF PRODUCTION
HISTORY:
​The 15 cm schwere Feldhaubitze 18 or sFH 18 (German: "heavy field howitzer, model 18), nicknamed Immergrun ("Evergreen"), was the basic German division-level heavy howitzer during the Second World War, serving alongside the smaller but more numerous 10.5 cm LeFH 18.
It was based on the earlier, First World War-era design of the 15 cm sFH 13, and while improved over that weapon, it was generally outdated compared to the weapons it faced.

It was, however, the first artillery weapon equipped with rocket-assisted ammunition to increase range. The sFH 18 was also9 used in the self-propelled artillery piece Schwere Panzerhaubitze 18/1 (more commonly known as the Hummel).

The gun originated with a contest between Rheinmetall and Krupp, both of whom entered several designs that were all considered unsatisfactory for one reason or another. In the end the army decided the solution was to combine the best features of both designs, using the Rheinmetall gun on a Krupp carriage.

The carraige was a relatively standard split-trail design with box legs. Sand shovels were carried on the sides of the legs that could be slipped onto the ends for added support. The carraige also saw used on the 10.5 cm Sk 18 gun. As the howitzer was designed for horse towing, it used an unsprung axle and hard rubber tires.

A two-wheel bogie was introduced to allow it to be towed, but the lack of suspension made it unsuitable for towing at high speed. Th inability of heavy artillery like the sFH 18 to keep up with the fast-moving tank forces was one of the reasons that the Luftwaffe invested so heavily in dive bombing, in order to provide a sort of "flying artillery" for reducing strongpoints.

The gun officially was introduced into service on 23 May 1935, and by the outbereak of war the Wehrmacht had about 1,353 of these guns in service. Production continued throughout the war, reaching a peak of 2,295 guns in 1944. A total of 5,403 sFH 18's were produced.

In the field, the sFH 18 proved to be greatly inferior to the Red Army's  122 mm A-19 gun-howitzer, whose maximum range of 20 km allowed it to fire counter-battery against the sFH 18 with seven km advantage.

This led to numerous efforts to introduce new guns with even better performance than the A-19, while various experiments were also carried out on the sFH 18 to improve its range. These led to the 15 cm sFH 18M version with a removable barrel liner and muzzle brake that allowed a larger "special 7" or 8 charge to be used.

The 18M increased range to 15,100 m, but it was found that the liners suffered increased wear and the recoil system could not handle the increased loads in spite of the brake. This led to a more interesting modification, the introduction of the 15 cm R. Gr. 19 FES ammuntion, which used a rocket-assisted round that could reach 18,200 m and give it some level of parity with the A-19.
Several other versions of the basic 15 cm were produced. The 15 cm sFH 36 was a version with a greatly reduced 3,450 kg weight that was an attempt to improve mobility, but it used various light alloys to achieve this savings and it was considered too costly to put into production.

The 15 cm sFH 40 was another improved version, featuring a slightly longer barrel and a new carraige that was suitable for vehicle towing and allowed the barrel to have wider firing angles and thereby improved range up to 15,400 m.

However, this version was even heavier than the sFH 18 (at 5,680 kg) and was found to be too difficult to use in the field. Some of these barrels were later fitted to existing sFH 18 carraiges, creating the sFH 18/40.

A further modification was the FH 18/43, which changed to a split breech that allowed for the use of bagged charges instead of requiring gunners to first put the charges into shells. Two further attempts to introduce a newer 15 cm piece followed, but neither the 15 cm sFH 43 or 15 cm sFH44 progressed past the stage of wooden mock-ups.

Several countries continued fielding the sFH 18 after the war in large numbers including Czechoslovakia, Portugal and many South American and Central American countries. Finland bouth 48 sFH 18 howitzers from Germany in 1940 and designated them 150 H/40.

Gunze Sangyo is a model company that was based in Tokyo, Japan.

The box art shows 4 color walk-around type photos of the howitzer made up and one photo of the 4 turned aluminum gun barrel parts, some measurements all in Japanese and the copyright date of December 1990.

One side panel has a black and white side view of the howitzer made up, followd by a one paragraph history of the gun in English and Japanese.

The other side panel has 2 color photos of the howitzer made up, followed by a paragraph in Japanese only, Gunze Sangyo's street address in Tokyo, Japan and the address of their office in Germany.

The kit holds 5 white hinged topped boxes that fit the tray tight. The each hold the kit parts in sealed cello bags. There are 83 white metal parts in the kit and 4 turned aluminum gun barrel sections. 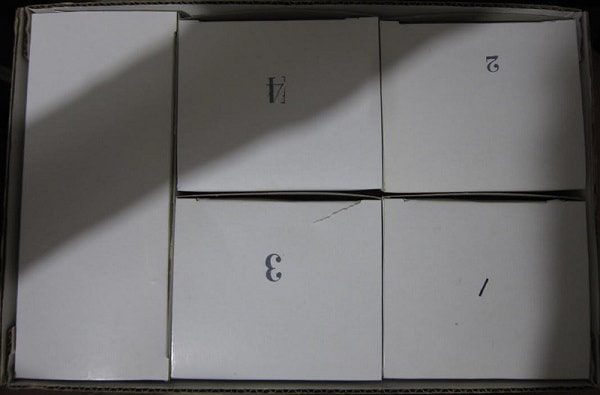 The instructions complete the kits contents. I consists of a unbound booket of 8 pages in 8" x 11" page format.

The first page begins with 4 black and white walk-around type photos of the howitzer made up, over international assembly symbol explanations in Japanese only and "Caution, not suitable for children under 3 years. Contains small Parts" in 9 languages, including English.

Page 2 has a black and white photo of all the kit parts, over a listing of the numbers and names of the parts in Japanese only.

Page 3 through 8 give a grand total of 12 assembly steps.

I cannot identify by name each part. So, I will pass on that and let readers look at the picture of the parts. 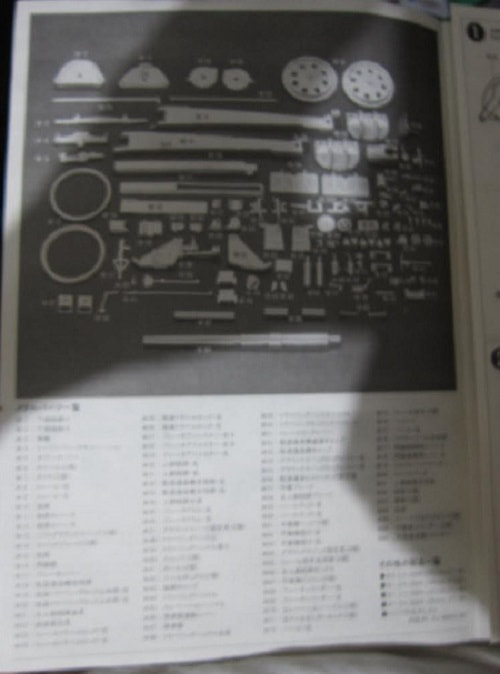 The instructions say that the gun traverses and elevates and the breech can be opened and shut when built.

I got this kit and the rest of a felow modelers kit collection that he willed to me when he died of cancer years ago. He also willed me his after market AFV accessories company too.

There are no decals or crew figures in the kit.
​Very highly detailed and highly recommended.