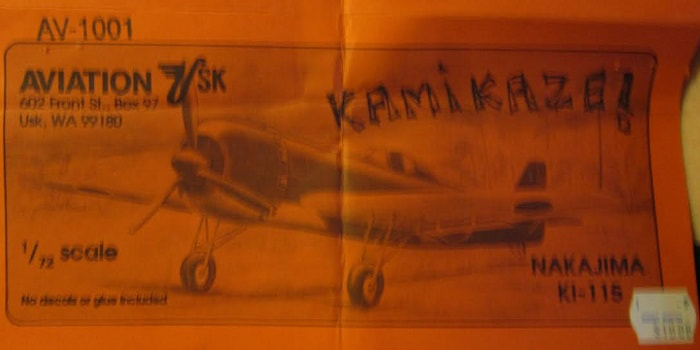 The aircraft's intended purpose was to be used in kamikaze attacks on Allied shipping and the invasion fleet expected to be involved in the invasion of Japan, Operation Downfall, which in the end did not take place.

Because the Japanese High Command thought that Japan did not have enough obsolete aircraft to use for kamikaze attacks, it was decided that huge numbers of cheap, simple suicide planes should be constructed quickly in anticipation of the invasion of Japan.

The aircraft was very simple, being made from "non-strategic" materials (mainly wood and steel). To save weight, it was to use a jettison-able undercarriage (there was to be no landing), so a simple welded steel tube undercarriage was attached to the aircraft.

This, however, was found to give unmanageable ground-handling characteristics, so a simple shock absorber was then incorporated. The cross section of the fuselage was circular and not elliptical as were most planes of this size and type; such a fuselage was easier to make.

Tsurugi had an instrument panel with some flight instruments; rudder pedals in addition to joystick type control column, and also a place for a radio. Flight controls included both ailerons and elevators and (in production versions) flaps.

The Ki-115 was designed to be able to use any engine that was in storage for ease of construction and supply, and to absorb Japan's stocks of obsolete engines from the 1920s and 1930s.

The initial aircraft (Ki-115a) were powered by 858-kilowatt (1,151 hp) Nakajima Ha-35 radial engines. It is not known if any other engine was ever actually fitted.

After testing the first production aircraft were fitted with the improved undercarriage and two rocket units. These may have assisted with take-off or may have been designed for the final acceleration towards the target.

The aircraft had a top speed of 550 kilometres per hour (340 mph) and could carry a bomb weighing as much as 800 kilograms (1,800 lb), large enough to split a warship in two. However, it was otherwise unarmed, and heavily laden with its bomb, would have been an easy target for enemy fighter aircraft.

The controls were crude, the visibility terrible, and the performance abysmal. Tsurugi had very poor take-off and landing performance and could not be safely flown by anyone other than experienced pilots. There were fatal crashes during testing and training.

However new, better versions  with improved controls and better visibility were under intensive development. The Japanese High command had plans to construct some 8,000 per month in workshops all across Japan.

The war ended before any flew in combat. Individually, they would have been rather inefficient weapons, but used in waves of hundreds or thousands they could have been quite destructive.
Variants:

An example of the Ki-115 is at the Garber Facility of the National Air and Space Museum, in disassembled condition.

Another, once displayed as a gate guardian at Yokota Air Base, is reportedly at a Japanese museum.

I got this kit willed to me by a modeling friend years ago who died of cancer. I don't know if it was originally in a bag or box??

My friend had it in a clear box with a locking hinged lid.

The parts are all loose in this box and not attached to any trees.

There is a single sheet in 12 1/2" x 9 1/2" format printed on both sides on bright orange card stock for the instructions.

The face side of this sheet has a black and white illustration of the KI-115 sitting on the ground over a 3-view of the aircraft in overall bare metal with just Japanese roundels and color call-outs.

The reverse side has 2 exploded drawings for assembly purposes and some references. The kit was made in the Czech Republic and marketed in the U.S.A. by Aviation USK.

Their address in Usk, Wa is provided.

WHAT'S IN THE PLASIC BOX:

The box contains loose dark green parts that I suspect may be resin by their appearance.

There are no location pins on them and they will all have to be butt joined.

These parts consist of the fuselage halves, wing halves, propeller, seat, engine, main wheels, gear legs, spinner, half of a bomb (other half is missing), bomb bay and elevators. 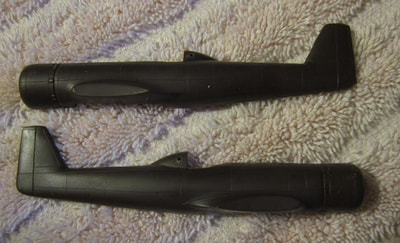 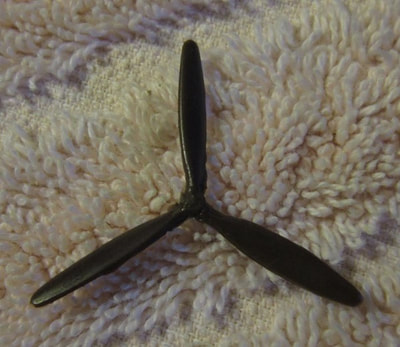 ​The clear part is the canopy and it is vacuformed.

There are no decals in the kit and the detail is mediocre at best.

Really no panel lines.
​Recommended if a modeler wants a kit of this obscure suicide aircraft, that...to my knowledge....no other kit manufacturer has done a kit of.