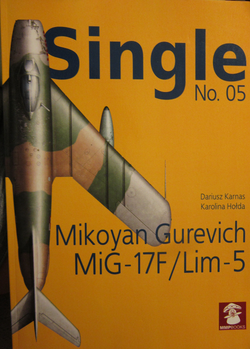 The Mikoyan-Gurevich MiG-17 (Russian: Микоян и Гуревич МиГ-17; NATO reporting name: Fresco) is a high-subsonic fighter aircraft produced in the USSR from 1952 and operated by numerous air forces in many variants.

It is an advanced development of the similar looking MiG-15 of the Korean War. The MiG-17 was license-built in China as the Shenyang J-5 and Poland as the PZL-Mielec Lim-6.

MiG-17s first saw combat in 1958 in the Second Taiwan Strait Crisis and later proved to be an effective threat against more modern supersonic fighters of the United States in the Vietnam War.

It was also briefly known as the Type 38 by U.S. Air Force designation prior to the development of NATO codes.

Mushroom Model Publications (MMP) is based in the UK. All their books are printed by their associate Stratus in Poland in the English language.

The cover is bright yellow with a color top view of a Mig-17F (Polish designation Lim-5).

Upper surfaces and sides are painted light-grey, green and sand. Lower surfaces are light-blue. It has the Polish Air Force red and white checkerboard insignia in the rudder and fuselage sides and a red stenciled  serial no. 1023 on the sides of the nose. Black BG2-01920965 is painted on the port under-wing tank.

It was with the 61st Air Combat Training Regiment, Biala Podlaska ca. 1985.

This scheme is seen again in the last pages of the book as a color 4-view. Colors are also shown in patches with FS numbers.

This Mig-17 on the cover art has its left wing bent around the spine of the book and partially on the back cover.

The book starts with 6 1/72nd scale line drawings of the Mig-17F along with illustrations of the bulkheads inside the fuselage.

There is also 4 1/48th scale line drawings, also with the bulkhead illustrations.
There are 10 illustrations for maintenance manuals with names of the parts shown.