During the 1930’s, the standard fighter aircraft was a fixed landing gear biplane of metal and wood construction. When Russian submitted its requirements for a new fighter, they simply stated that it had to be better than any other fighter in the world, and capable of being produced in existing Russian work force.


First flown in December 1933, this radical fighter was a small low-wing cantilever monoplane of mixed wood and metal construction. It had an enclosed cockpit, armor protection for the pilot and retractable undercarriage, none of which made the early pilots happy. It was mass produced almost immediately with several types introduced throughout its production run.


It’s very small dimensions made it as unstable as it was maneuverable, making it very troublesome during take off and landing. In 1936, during the Spanish Civil War, the I-16 proved successful against the German He-51 biplanes, but it was later outmatched by the Messerschmitt BF-109.


Nicknamed “Mosca” (Fly) by its pilots, the I-16 was a front line fighter for Russia until 1943 when new fighter type aircraft became available.

Hasegawa is a older prolific model company based in Japan. They make all manner of model subjects in the popular scales.

The kit comes in a shrink-wrapped tray with lid type box while the box art shows two I-16’s flying above the clouds.

The I-16 in the foreground is in RLM 83 dark green above a light-blue undercarriage. It has a small red star above the wings and the sides of the fuselage. 3A CCCP is down one side in sky colored lettering and 3A BKM(6)! Is down the other side of the fuselage. I’m pretty sure 3A CCCP translates into “For Russia”. I don’t know what the other slogan translates to??? There is a sky colored number 13 on the rudder sides.

The I-16 in the background is in the same color scheme, with a different 3A slogan on its sides and a no. 11 on the rudder. These marks are not included on the decal sheet.

One side panel lists the kits features in 8 languages, each marked with the flag of the country that speaks that language, including English:

“Parts for one model, paint and cement not included, with English instructions” and MADE IN JAPAN.
The other side panel says the kit makes up to be 86 mm long, 126 mm wing-span, has 46 parts. Next is a color photo of the model made up in the box art scheme".

The copyright date of 1995 and MADE IN JAPAN again.

The kits box is over-sized and 2” too long.

This kit contains 2 large and 2 small dark grey trees, a clear tree, a metal rod, the decal sheet and the instructions in a sealed cello bag.

The instructions consist of a single sheet that accordion-folds out into 8 pages in 4” x 8 ½” page format.

Page 1 of the instructions begins with a black and white photo of the model made up in the box art scheme, followed by the history of the I-16 in Japanese and English.

At the top of page 2 is international assembly symbol explanations.
Spread across page 2 to page 4 are 8 assembly steps.

Page 5 begins with the parts trees illustrations, followed by a service coupon for use by Japanese modelers only and a listing of paint colors suggested to use to complete the model.

Page 6 has a painting and marking instructions for the box art scheme as a 3-view (already described above). It is an aircraft with 72AP WS SF S.G, Burzhenka Murmansk 1941.

Page 7 has a second 3-view of a I-16 with an unknown unit. It is in the same dark green above light blue, with a red no. 1 on the rudder and a red tip on the tail top.

Page 8 has “Please keep the following rules” in 14 languages, including English on it, followed byHasegawa’s address and telephone number in Japan and the copyright date of 1995 for this kit. 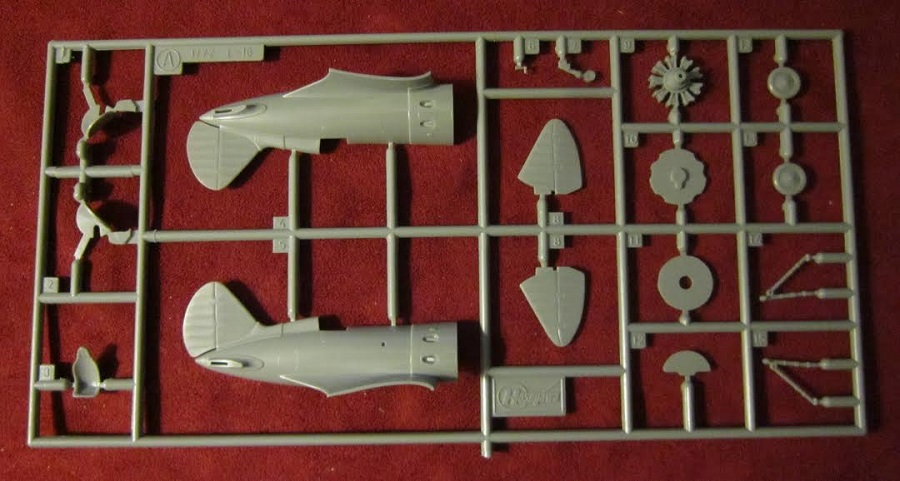 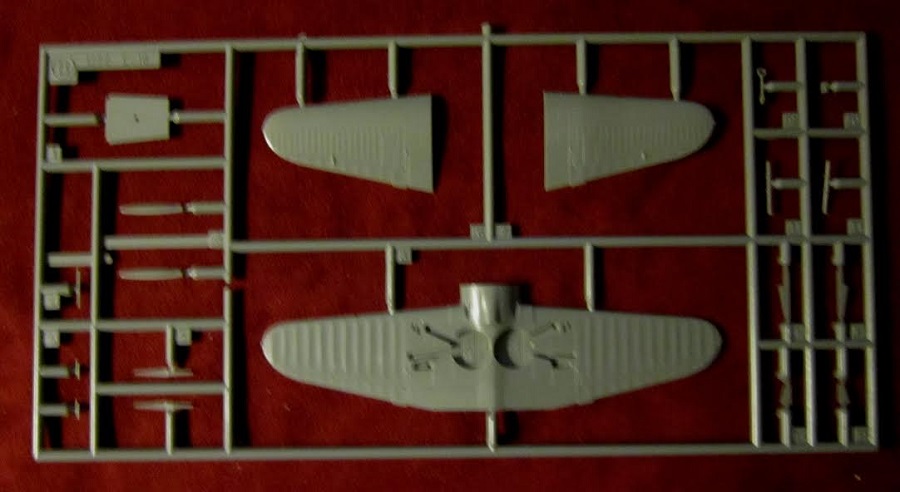 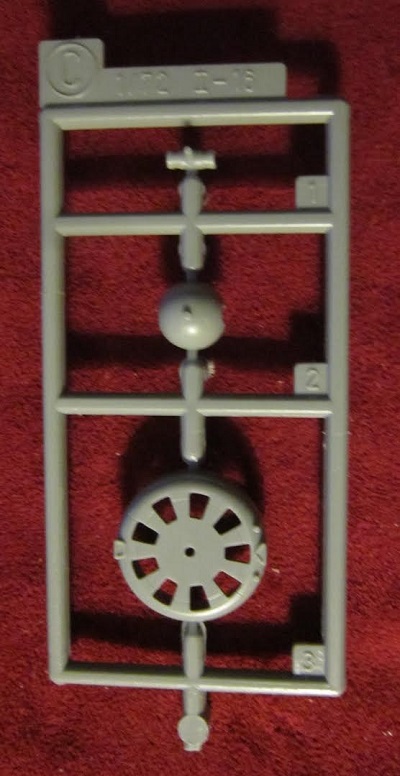 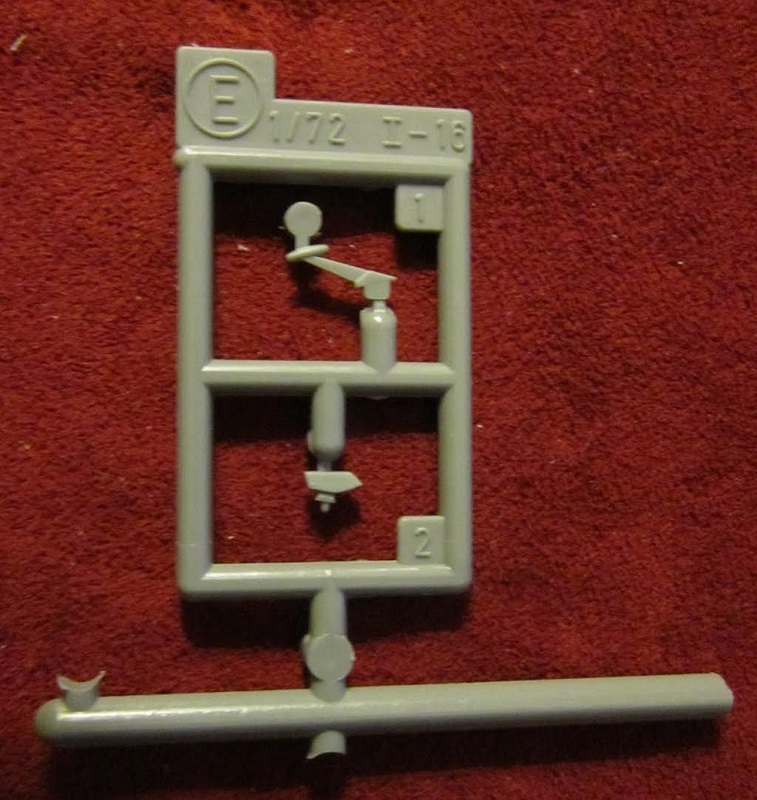 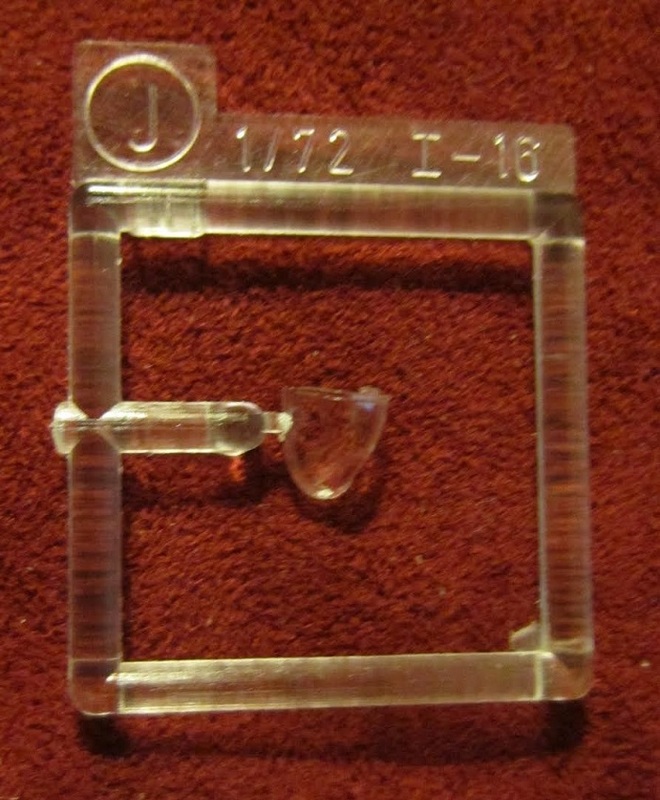 The metal rod is next. It is to be used to make two 20 mm long landing gear support arms bent on each end.
The decal sheet and instructions completes the kits contents. 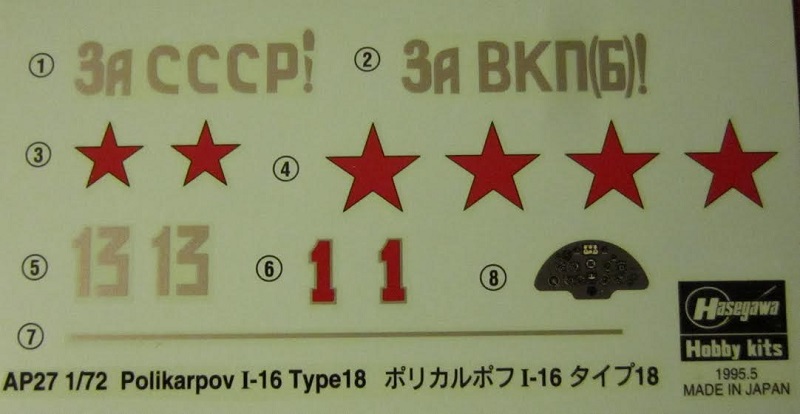 Detail is engraved. Control surfaces are molded solid and will need surgery to re-position them.

There is no pilot figure included.
The kit has very good detail and is highly recommended.
I bought my kit on sale back in the 90’s for $8.99.