Copyright 1970. I paid $6.00 for my kit at Iowa Service Hobby store in Des Moines, IA that went out of business.
​HISTORY:

The Nakajima Ki-27 (Kyūnana-shiki sentōki, or Type 97 Fighter) was the main fighter aircraft used by the Imperial Japanese Army Air Force up until 1940. Its Allied nickname was "Nate", although it was called "Abdul" in the "China Burma India" (CBI) theater by many post war sources.

Allied Intelligence had reserved that name for the nonexistent Mitsubishi Navy Type 97 fighter, expected to be the successor to the Type 96 carrier-borne A5M with retractable landing gear and an enclosed cockpit

In 1935, the Imperial Japanese Army held a competition between Nakajima, Mitsubishi, and Kawasaki to design a low-wing monoplane to replace the Kawasaki Ki-10 (Army Type 95 Fighter) biplane. The new fighter was to have also a better performance than the experimental Mitsubishi Ki-18.

The results were the Nakajima Ki-27, the Kawasaki Ki-28, and the Mitsubishi Ki-33 (a modification of the Mitsubishi A5M carrier-based fighter).The Nakajima design was based on its earlier Ki-11 monoplane fighter which lost to the Ki-10 in the Type 95 Fighter competition.

When the follow-up Nakajima Ki-12 proposal with a liquid-cooled engine and retractable landing gear was deemed too complex by the Japanese officials, the Ki-27 was designed by Koyama Yasushi to have an air-cooled radial engine and fixed landing gear.

The aircraft had the Nakajima trademark wing with a straight leading edge and tapered trailing edge which would reappear again on the Ki-43, Ki-44, and Ki-84.
The Ki-27 made its first flight on 15 October 1936. Although it had a slower top speed and worse climb performance than its competitors, the Army chose the Nakajima design for its outstanding turning ability granted by its remarkably low wing loading. The Army ordered 10 pre-production samples (Ki-27a) for further testing, which featured an enclosed cockpit with sliding canopy and larger wings.

The type was officially accepted into service in 1937 as the Army Type 97 Fighter. In addition to Nakajima, the Ki-27 was also manufactured by Tachikawa Aircraft Company Ltd and Manshukoku Hikoki Seizo KK, with a total of 3,368 built before production ended in 1942.

Hasegawa is a older prolific model company. They make all manner of model subjects in the popular scales. They are based in Yaizu, Japan and this kit was imported by Minicraft, printed in the USA.

The kit comes in a blousy shrink-wrapped tray and lid type box. It is 2" too long with a void at one end.

The box art shows 2 Nate's flying over the countryside. There is a black cloud of smoke rising from the ground.

These 2 Nate's are with the 84th Japanese Air Force independent Chutai.

One side panel shows a Nate in overall light-gray (FS16492) with a red pointed taper along the sides of the fuselage, covered with a wide white fuselage band with the Japanese red circle insignia on it.

On the rudder is a red star with a white center inside a circle on top of 3 red horizontal stripes alternating with 2 white stripes.

This is followed by MANUFACTURED IN USA under license from Hasegawa Model Co. in Yaizu, Japan and Minicraft Model Inc.'s address in Torrance, Ca., where it was made and the printing was done.

​The other side panel has 3 color photos of the model made up in these 2 schemes.

The kit contains 5 pale-gray trees, a clear tree, decal sheet and instructions.
Nothing is cello bagged.

The face side begins with a black and white repeat of the box art over the history of the Nate and marking and coloring instructions showing a 4-v for the 2 schemes already described above.

The reverse side has 6 assembly steps on it.

Part trees are not alphabetized or illustrated in the instructions, but do have part number tabs next to the parts on them. 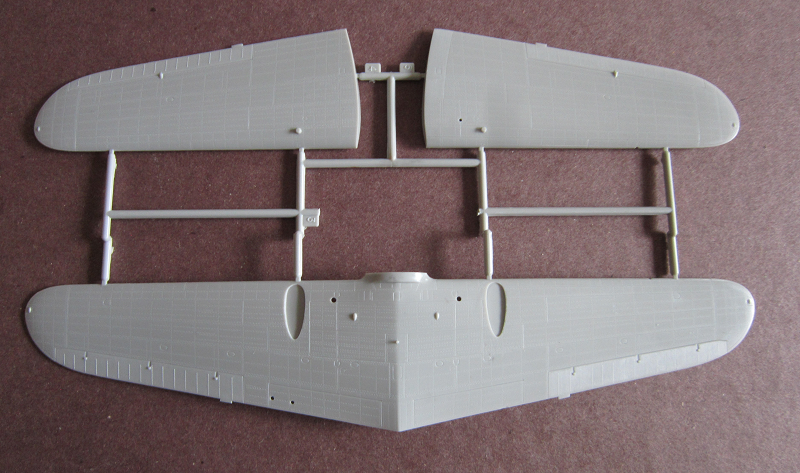 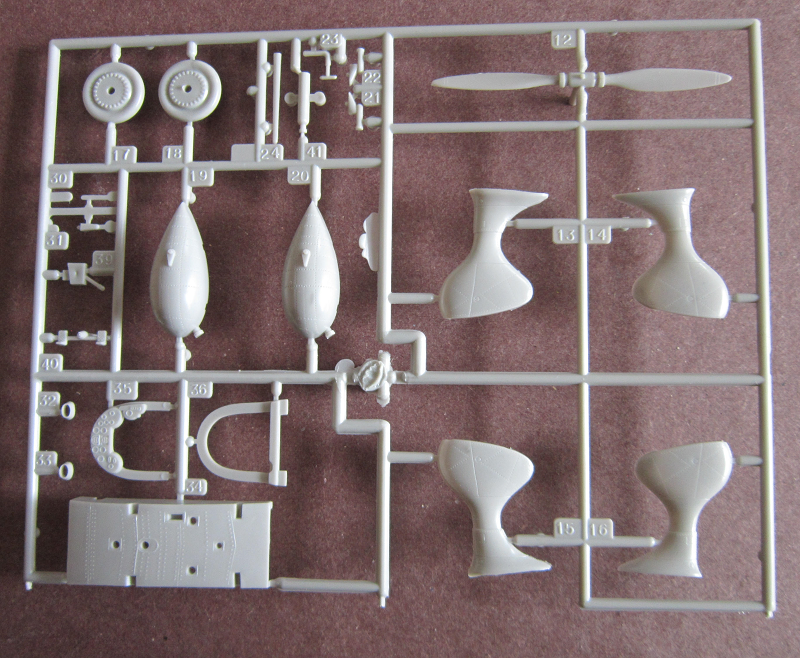 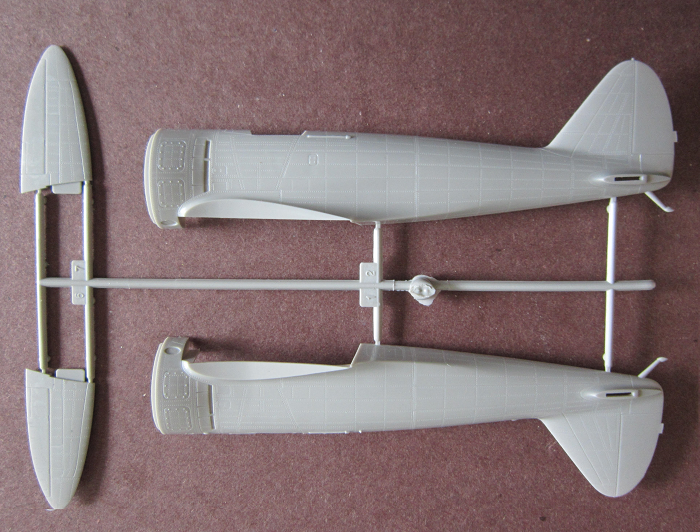 ​The clear tree is next. It holds 2 canopies. One with solid rear canopy section and one with open frame detail. 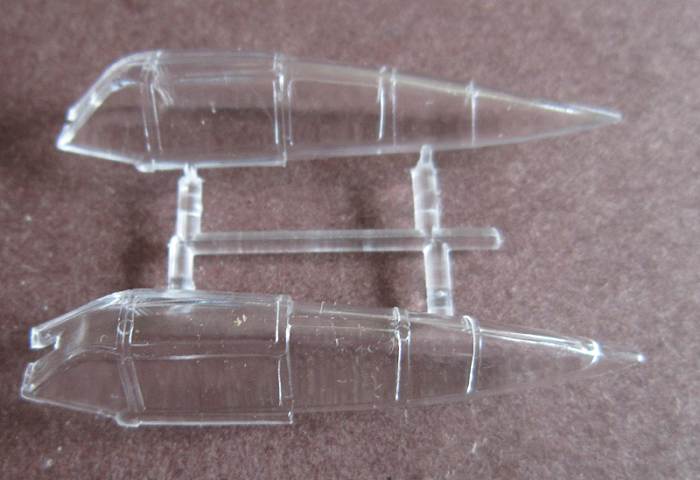 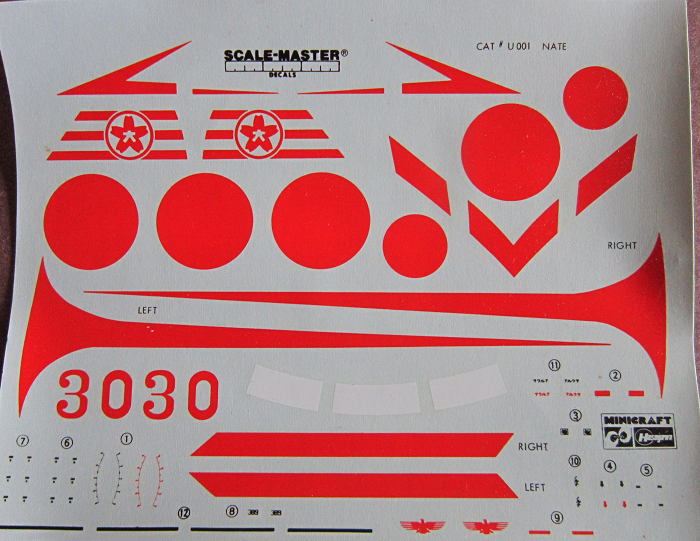 ​This kit has very nice detail with light engraved panel lines which may disappear under a heavy coat of paint.
​Highly recommended.