​Macchi aircraft designed by Mario Castoldi received the "C" letter in their model designation, hence the Folgore is referred to as the C.202 or MC.202. The C.202 was a development of the earlier C.200 Saetta, with an Italian built version of the Daimler-Benz DB 601Aa engine and with a redesigned, more streamlined fuselage. Considered to be one of the best wartime fighters to serve in large numbers with the Regia Aeronautica, the Folgoreoperated on all fronts in which Italy was involved.

The Folgore went into service with the Regia Aeronautica in July 1941 and immediately proved to be an effective and deadly dogfighter. The Australian ace Clive Caldwell, who fought a wide variety of German, Italian and Japanese fighters during 1941–45, later stated that the C.202 was "one of the best and most undervalued of fighters".

Nonetheless, the C.202 had its defects: like its predecessor, the Macchi C.200, it could enter a dangerous spin. It was insufficiently armed, with just two machine guns that easily jammed. The radios were unreliable, forcing the pilots to communicate by waggling wings. The oxygen system was inefficient, causing 50 to 60 per cent of the pilots to break off missions, sometimes even causing fatal accidents.

Hasegawa is a model company based in Japan.

The box art shows a Macchi M.C. 202 in combat with a British Bristol Blenheim.

The 202 is in a base of sandy brown with dark green amoebic spots. The undercarriage is light blue. It has  white propeller spinner.

There is a Fascist symbol on the sides of the fuselage in front of the windscreen, a command pennant on the sides under the cockpit.

The serial no. CLIII in red with white outline on the fuselage sides, followed by a white, red, white fuselage stripe. There is a white cross with the House of Savoy insignia on it on the tail sides.
This aircraft is of the commander of the 153rd Gruppo, Italian Air Force.

One side panel says the kit contains parts for one model. Paint and glue are not included. It has English instructions.

This is all said in 8 languages that are marked with the flags of the countries that speak those languages, including English.

The other side panel has a color photo of the model made up in the box art pattern  and a 1992 copyright date.

The kit contains 2 light grey trees, one clear tree and the decal sheet in a sealed cello bag.

The instructions consist of a single sheet that accordion-folds out into 8 pages I that are in 4 ¼” x 8 ¾” page format.

Page 1 of the instructions begins with a black and white photo of the model made up in the box art scheme. This is followed by the history of the aircraft in 7 languages, including English.

Spread across pages 2 through 5 are 6 assembly steps.

Below these is a listing of paint colors suggested to use to finish the model.

Spread across pages 6 through 8 are two painting and marking schemes each shown as 4-views.

The first scheme is the box art subject (already described above).

The second scheme is in the same camouflage colors pattern as the box art one. It has the fuselage number 369 in red, followed by a wide white fuselage band with a squadron logo on it and a red 2.

On the right side of page 8 is the parts trees illustrations, with Hasegawa’s phone number and street address in Japan, PRINTED IN JAPAN and the copyright date of 1992. 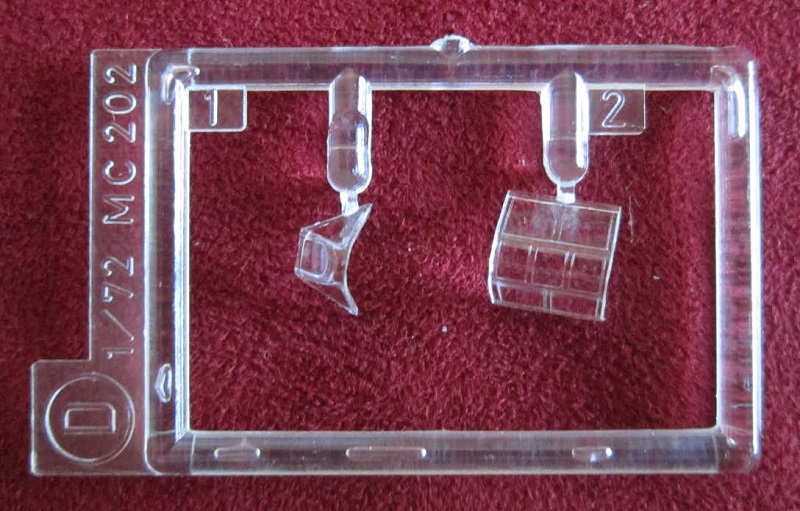 The decal sheet is next. It includes the dashboard instruments and some stencil marks. 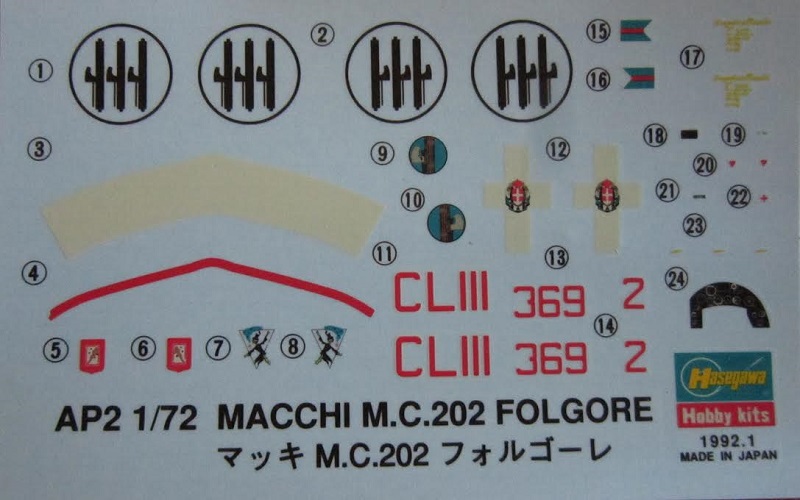 There is another small sheet in the kit, printed on both sides, with READ BEFORE ASSEMBLY  instructions and decal application instructions on it in multiple languages, including English.
I bought my kit back in the 90’s at my local hobby shop. Highly recommended.