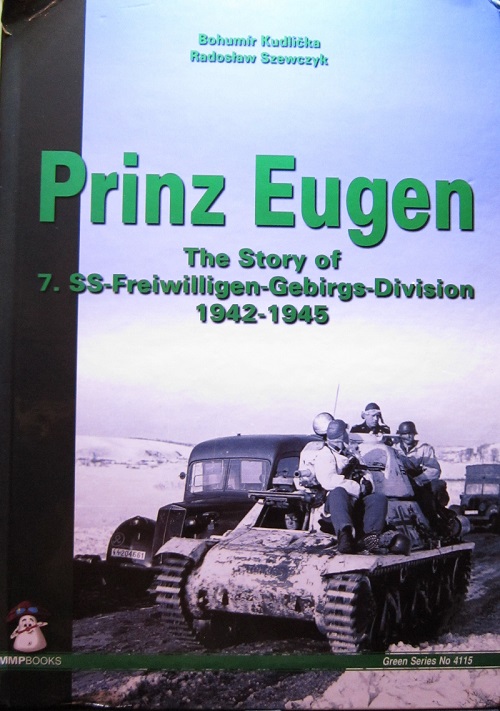 MMP (Mushroom Models Publications) is based in the U.K. All their books are printed in Sandomierz Poland by their associate Stratus Publications in English. Stratus also prints books in Polish.

This new book was sent to me from Stratus in a padded envelope. However, overseas mail managed to crush two corners of the book.

The 7th SS Volunteer Mountain Division Prinz Eugen was a German mountain infantry division of the Waffen SS, the armed wing of the German Nazi Party that served alongside, but was never formally part of the Wehrmacht during WWII. Formed in 1941 from Volksdeutsche (ethnic German) volunteers and conscripts from the Banat, Independent State of Croatia (NDH), Hungary and Romania, it fought a counter-insurgency campaign against communist-led Yugoslavian Partisan resistance forces in the Territory of the Military Commander in Serbia, NDH and Montenegro.

It was given the title Prinz Eugen after Prince Eugene of Savoy, an outstanding military leader of the Habsburge Empire who liberated the Banat and Belgrade from the Ottoman Empire in the Austro-Turkish War of 1716-1718. It was initially named the SS-Freiwilligen Division Prinz Eurgen (SS-Volunteer Division Prinz Eugen).

This lavishly illustrated book tells the story of this unit and its operations. There are 365 black and white wartime photos in the book. Many of these are previously unpublished. 96 of them are of individuals. The book also contains 10 maps and 10 charts. There are 15 color illustrations. These include:

A profile of a captured French R-35

A profile of a German ADGZ heavy armored car

A 2-view of a captured French Char B-2

A front view of a German BMW 326 field car

A profile of a German Junkers Ju-52 tri-motor aircraft

A profile of a German Henschel Hs-126 aircraft

A profile of a German Sd.Kfz. 252 with illustration of the top of the turret

These color illustrations and maps are all by Thierry Vallet.

This book will be of great interest to modelers and WWII historians. Highly recommended,.

I want to thank Roger Wallsgrove, Editor-in-Chief of MMP and the folks at Stratus in Poland for this review copy.

Information about all MMP books can be found on their web site at:
www.mmpbooks.biz

The N. American distributor is Casemate.