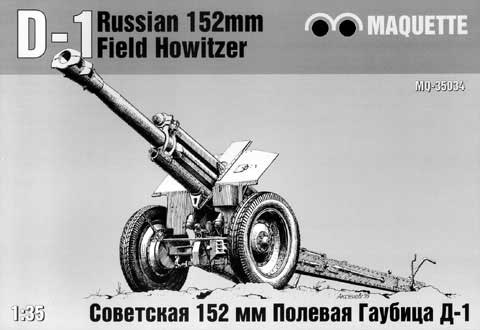 MSRP:  out of production
History:

The powerful and mobile D-1, with its wide range of ammunition significantly increased the firepower and breakthrough abilities of Red Army tank and motor rifle formations. Several hundred D-1’s were manufactured before the end of WWII.

The D-1 had two-part ammunition: the war-head and the powder charge. It could fire the type 530 high explosive, the type 0-530A fragmentation, the F-533 and F-534 fougasse (anybody know what these were?), and the type G-530 concrete coated shell.

Post WWII, the D-1 saw combat in numerous conflicts during the mid-to late 20th century. The long operational history of the D-1 howitzers in national armies of numerous countries is a testimony to its qualities. The gun still remains in service in a number of post Soviet States and some other countries. The D-1 is widely considered a valuable element of Soviet artillery.

I got this kit back in 2000 in trade with a modeler in Australia. He sent it just in a cello bag with no box to hold the weight down for postage needed. It is out of production and at the time of it’s release was said to be a limited run edition. 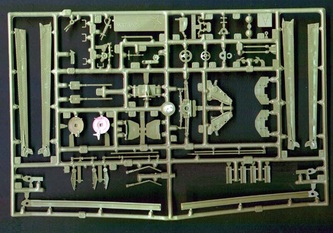 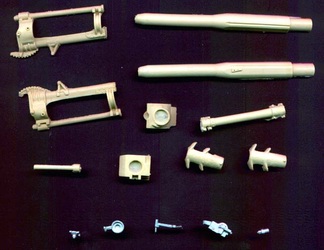 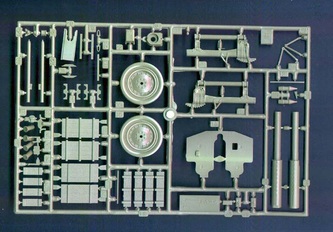 There are dark dark green trees of parts in the kit.Both of these trees have the Zvezda brand name on them. So, it is obvious that this kit is a cooperative effort between Maquette and Zvezda. Both brands are based in Russia.

There is also a small cello bag full of resin and white metal parts. So, the kit is also a multi-media one too.

Tree letter 'A' of the plastic parts holds the gun trail arms (there are some nasty sinks in these), shovels, and other assorted parts (57 parts here)

Tree letter 'B' of the plastic parts holds the wheels, gun shield, gun barrel (this barrel is excess, as there is a resin one given for this kit), barrel cradle, breech (again, a resin one is given for the kit),2 wood ammo cases, and ammo etc. (57 parts here also) There are 4 ammo powder charges and 2 complete rounds here.

The sinks in the sides of the trail arms look like they will be a real booger to fix. There is rivet detail etc. on either side of this groove that runs almost the whole length of these parts.

There are no figures in the kit or any decals. I doubt the weapon ever had any markings on it.

The instructions is a single 8" x 11" sheet, printed on both sides.

A short history is given in Russian and English. Six steps ¬ sometimes rather confusing, are given for assembly. No mention is made of the 2 wood ammo boxes and the ammo rounds or how to assemble them. Colors are called out in a short sentence that says 'Over-all khaki green. Sometimes over-painted with white wash in the winter. Camouflage rarely, if ever, used.

This kit looks fairly good, except for the sinks (mentioned earlier). A gun crew and clearer instructions would have been nice.

Because of its obvious complexity and small parts and the dissimilar materials used to mold the kit, I recommend this kit only to modelers that have a few artillery models under their belts that are multi-media kits with resin and metal parts in them.

The kit may appear some time on eBay perhaps.