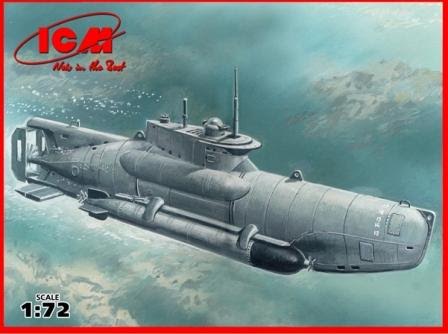 The origin of the Seehund began with the salvage of the two British X class submarines HMS X6 and X7 which had been sunk during Operation Source, an attempt to sink the German battleship Tirpitz. Hauptamt Kriegschiffbau subsequently produced a design for a two-man submarine based on inspection of the British boats, designated Type XXVIIA and named Hecht ("Pike")Crew 327.

As the orders were being placed, Hecht variants were under construction. The first was the Type XXVIIB, which had a greater range, could carry two G7e torpedoes, and had diesel/electric propulsion. The design was completed at the end of June 1944 and resembled Hecht but had a better boat-shaped external casing for improved seakeeping while surfaced, and saddle tanks.
Additional room had been made inside the pressure hull by moving the batteries to the keel, while the two torpedoes were slung externally in recesses in the lower hull. A 22 hp diesel engine was fitted for surface use and was estimated to give a surfaced speed of 5.5 knots (10.2 km/h; 6.3 mph), with a 25 hp electric motor providing a submerged speed of 6.9 knots (12.8 km/h; 7.9 mph).

The final variant of the Type XXVII was the Type XXVIIB5, better known as the Seehund ("Seal") or Type 127. Seehund had a small raised platform midships with the air intake mast, magnetic compass, periscope, and a clear dome which could survive depths of 45 m (148 ft). The submarine's fixed 3 m (9.8 ft) periscope incorporated lenses which let the commander check the sky above for aircraft before surfacing.

The first contract for Seehund construction was placed on 30 July 1944. Enthusiasm for the submarine was so high that most of the contracts and hull numbers were allocated even before the design was completed. A total of 1,000 boats were ordered, Germaniawerft and Schichau-Werke to build 25 and 45 boats per month respectively. Other centers involved in Seehund production were CRD-Monfalcone on the Adriatic and Klöckner-Humboldt-Deutz at Ulm.
However, Dönitz would not consent to the production of the Type XXVIIA being held up for Seehund construction, while shortages of raw material, labor and transport problems, and conflicting priorities in Germany's economy all combined to reduce Seehund production. In the end Seehund production was undertaken by Germaniawerft at Kiel using a facility which was no longer needed for Type XXI or Type XXIII production.

A total of 285 Seehunds were constructed and allocated numbers in the range U-5501 to U-6442.
The first Seehund operation took place on 31 December 1944, when 18 craft set out from IJmuiden in the Netherlands. However this was a disaster - the submarines encountered a storm and only two returned. The first sinking by a Seehund did not occur until February 1945 when a freighter was sunk off Great Yarmouth.

Seehunds operated mainly around the German coast and in the English Channel, and could attack on the surface in turbulent weather, but had to be almost stationary for submerged attacks. From January to April 1945 Seehunds performed 142 sorties, and accounted for about 93,000 gross tons of shipping (British sources estimate 120,000 tons)
.
From the Allied point of view the Seehund's small size made it almost impossible for Asdic to get a return from her hull, while her very quiet slow speed running made her almost immune to detection by hydrophone. As Admiral Sir Charles Little, Commander-in-Chief, Portsmouth put it, "Fortunately for us these damn things arrived too late in the war to do any damage".

The last Seehund sorties took place on 28 April and 2 May 1945, when two special missions were performed to resupply the besieged German garrison at Dunkirk with rations. The boats carrying special food containers (nicknamed "butter torpedoes") instead of torpedoes, and on the return voyage using the containers to carry mail from the Dunkirk garrison.

One of the boats used by the French navy post-war, S 622 is preserved and on display at the Musée national de la Marine in Brest, France.

The U-5075 is on display at the United States Naval Shipbuilding Museum, part of the Massachusetts Military Research Center, in Quincy, Massachusetts.[4] Occasional amateur radio events are conducted by this museum ship, using the callsign WW2MAN.

ICM is a model company based in Kyiv, Ukraine.

This kit comes in a shrink-wrapped end opening type box. I am no fan of this type of box, because invariably parts or the decal sheet find their way past the end flaps to become lost. My kit is slightly crushed too.

The box art shows a Seehund tooling along submerged. It is overall grey with white depth numbers on the bow. It carries torpedos in side drop collars. They are grey also with black war heads.

One side panel says the kit contains an unassembled plastic model kit. Length is 165mm, height is 54mm. It includes 42 parts for assembly of the model. Below this is ICM Holding's P.O. address in Kyiv, Ukraine, their telephone and FAX number, e-mail address and web site address. The kit is suitable for modelers over 14, but not for kids under 3.

The other side panel has color illustrations of 4 other ship kits that ICM markets;

The bottom of the box has a color side view of the side and top of a Seehund. It is overall gunship grey. The torpeos are engine grey with black warheads. There are white depth numbers on the bow. This sub was at Kiel, May 1945.

This kit contains one medium-grey parts tree in a resealable cello bag, the decal sheet,
instructions and a small sheet with IMPORTANT INFORMATION CONCERNING THE KIT in 20 languages, including English. ICM's P.O. address is below each of these.

The single medium-grey tree holds all the parts for the sub and the torpedos. The dome on the conning tower should be clear. However, ICM provides it as solid and wants you to paint it silver. I think I will find a clear dome somehow.

A base support part is included to set the sub on. 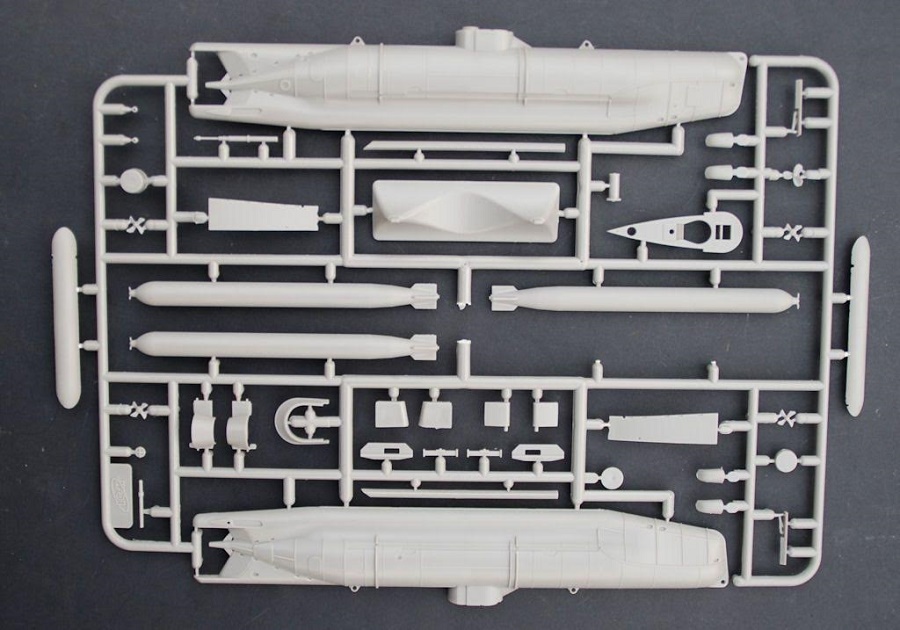 The decal sheet provides large white number, the depth indicator numbers (also white) and a German Kriegsmarine flag. The flag does not have the necessary swastika on it. I'll have to get one out of my spare decal box.
​The instructions consist of a single sheet that is folded in the center to create 4 pages in 5 1/2" x 8" page format.

A loose sheet the same size is inserted in the instructions that has a 2-view scheme on each side for painting and marking.

One is the box art scheme (already described above) at Kiel 1945.

The second one is overall gunship grey also with the engine grey torpedos with black warheads. It has the white number 365 on the sides of the conning tower. This sub was at the Baltic Sea, May 1945.

There is  white no. 22 on the decal sheet, but there is no scheme shown in the instructions for a sub with this conning tower number.

Page 4 of the instructions has a listing of Model Master brand hobby paint colors are next and decal application instructions in Ukranian and English. ICM's addresses appear again at the bottom of the page.

Page 1 begins with a one paragraph history of the Seehund in Ukranian and English, followed by an illustration of the lone parts tree. Three parts are shaded out in this illustration as being excess and not needed to complete the kit.

Page 2 through 4 of the instructions give a grand total of 6 assembly steps.

This is a kit definately for the novice modeler and can probably be finished in an hour or so. Highly recommended.
​ did a review here on the Bronco 1/35th scale Seehund kit, that can be found in the archives.
I won this kit in a raffle at a recent IPMS contest I attended.