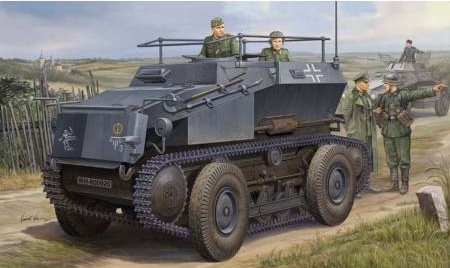 From 1929, the RK-7 was developed by Saurer as an artillery tractor for the Austrian Army. Testing was completed and in 1937 an order was placed for the tractors which were manufactured in 1938. About 12 vehicles were made prior to “Anschluss” after Austria was incorporated into Germany in 1938, the vehicle continued to be manufactured. Records indicate that a total of 140 units were built. The new designator for Germany was Sd.Kfz. 254. Notable features of this tank were its wheel-cum-track layout and a diesel motor.

The vehicle was designed in 1929 by Austrian company Saurer was unique in having full tracks for off road use as well as four large wheels that could be lowered for running on good roads like a normal wheeled vehicle. This was designated RK-7 and while the trials vehicles performed well the design was not adopted by the expanding Wehrmacht as too complicated and they also preferred to concentrate on their own half-track series of vehicles.

The RK-7 was powered by a 4-cylinder Saurer Diesel Typ CRDv engine of 5500cc generating 70bhp for a top speed of 30km/h (tracks) and 60km/h (wheels). With the annexing of Austria into the greater Reich in 1938, 140 vehicles were ordered with the German designation Sd.Kfz.254 Armoured Observation Vehicle but only 129 were completed with armoured bodies by Dailmer-Benz before production ended in favour of the Sd.Kfz.353 and Sd.Kfz.250/5 half-track observation vehicles.

The Sd.Kfz.254 saw service in the early war campaigns in Poland and France as well as in North Africa, the Balkans and Russia.

Hobby Boss is located in China.

This kit comes in a shrink-wrapped tray and lid type box. The box art shows a Sd.Kfz.254 parked on a dirt road. Two crewmen are looking out of the top of it and an officer and infantryman are having a conversation behind it. A Sd.Kfz. 223 four-wheeled armored car is behind it and a castle-like building is in the background. The vehicle is in overall panzer grey with a skeletal white cross on the sides of the fighting compartment. There are division markings on the front for the 4th Battalion, 11 Leichte Abtig., Motor Artillery Regiment, 15th Panzer Div., N.Africa 1942 also in white. The license number is WH-616663.

One side panel has a color left and right profile illustration of the box art subject, followed by the vehicle’s history in English, MADE IN CHINA, a copyright date of 2012 and Hobby Boss’s web address.

The other side panel has a color side profile of the Sd.Kfz.254 in overall sand with a thin black and white cross on the sides of the fighting compartment, followed by an illustration of the brass PE fret in the kit. On a white sticker it says that Squadron MMD is the distributor of the kit. “Not for children under 3, due to small parts” appears and the main materials are plastic.

The instructions consist of a staple-bound booklet of 16 pages in 8 ½” x 11” page format.

Page 1 of the instructions begins with a black and white repeat of the box art, followed by “Please read before operation” instructions, international assembly symbol explanations and decal application instructions in English.

Pages 3 through 16 give a grand total of 14 assembly steps.

The painting and marking sheet has a full color 4-view on each side for 2 marking and painting schemes. The first one is the box art subject. Already described above. The second one is in overall sand. It has the license plate number WH-616658. There is a small black and white cross on the sides of the fighting compartment and markings are for the 6th Battalion, 11th Leichte Abtig., Motor Artillery Regiment 78, 7th Panzer Division, N. Africa. 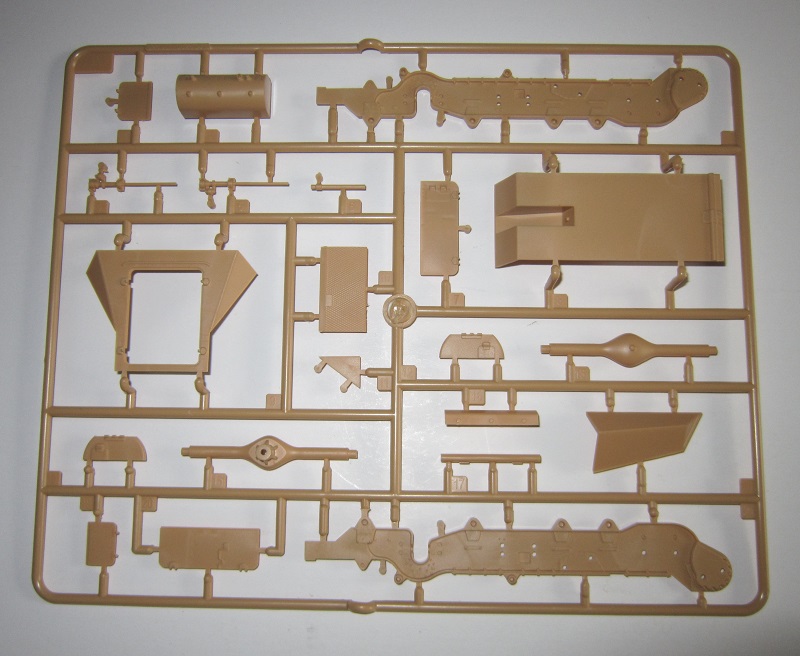 Light tan letter B parts tree holds: antenna, tools, vision slits etc. (56 parts) One of these parts is excess and not needed to complete the model. 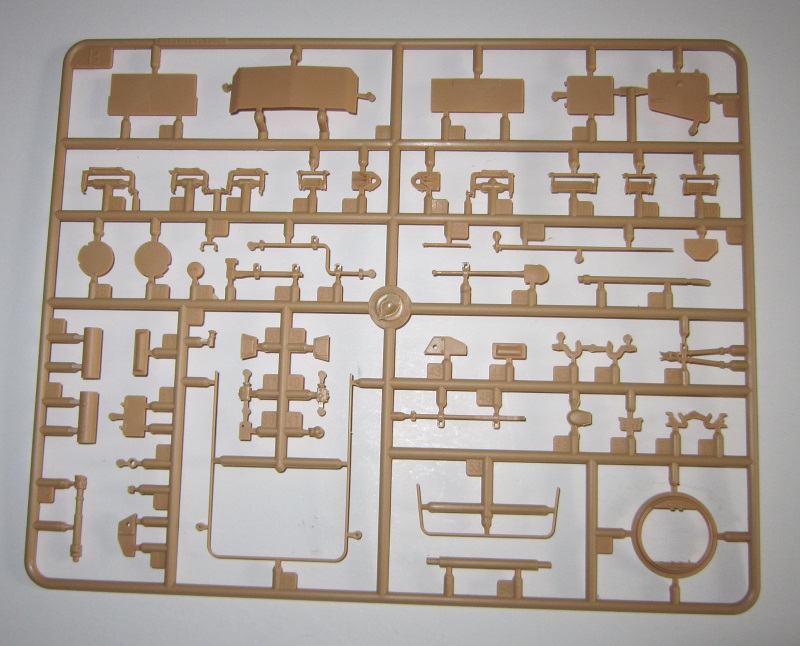 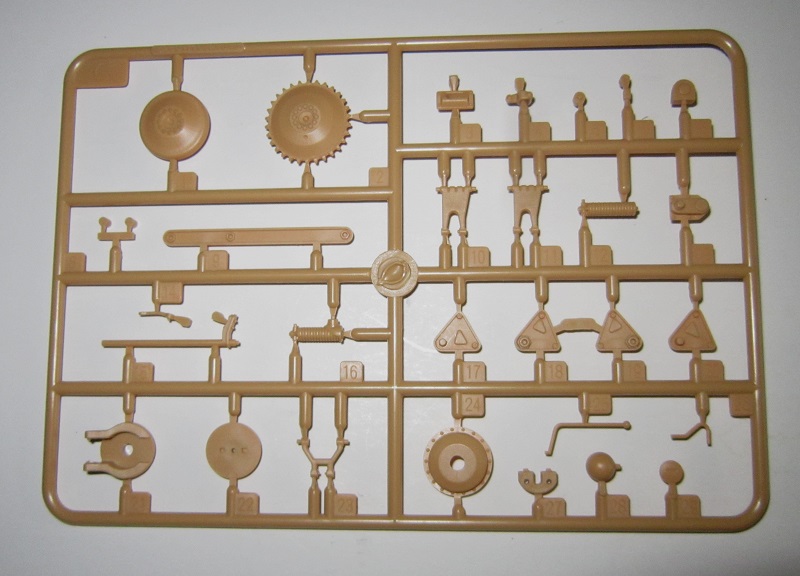 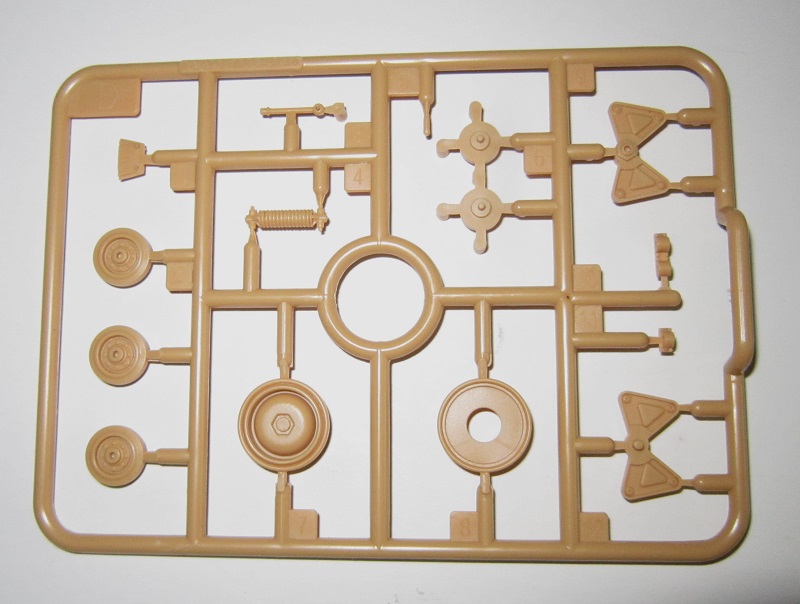 There are 12 identical brown letter E parts trees. They hold the individual track links. (27 parts each) 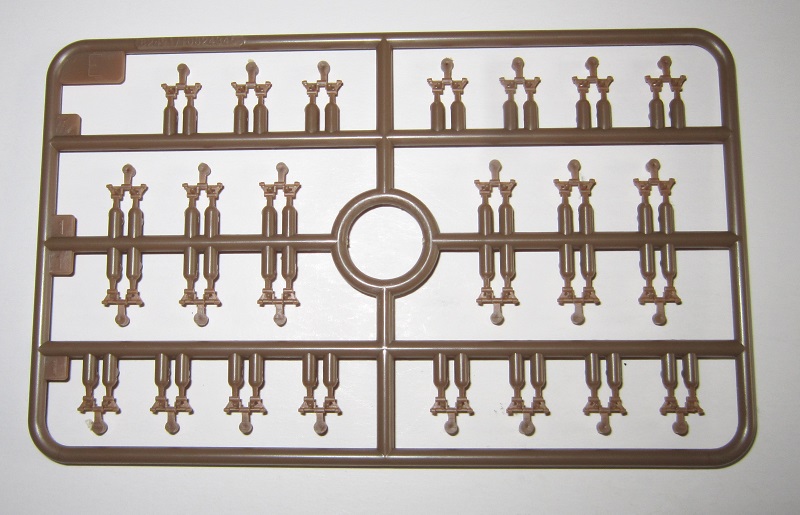 Next are the 4 black vinyl tires. 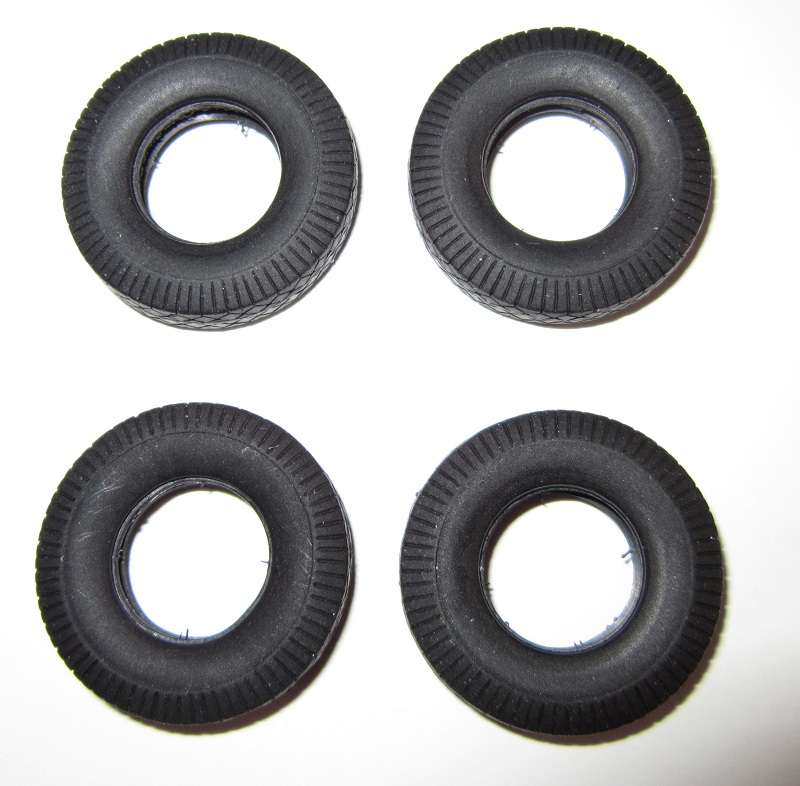 The brass PE fret holds 29 parts. I will not attempt to try and name these parts as there are just too many and I would get the names wrong for sure. 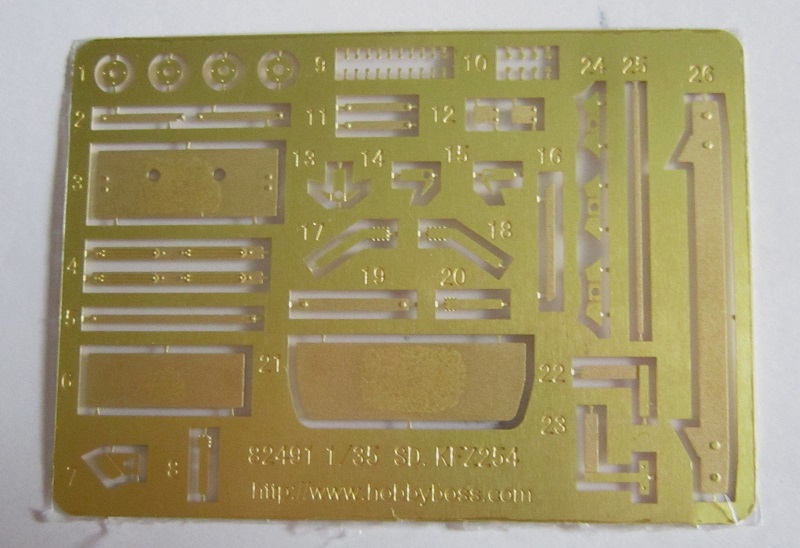 The decal sheet and the card to join “World of War” complete the kit’s contents. 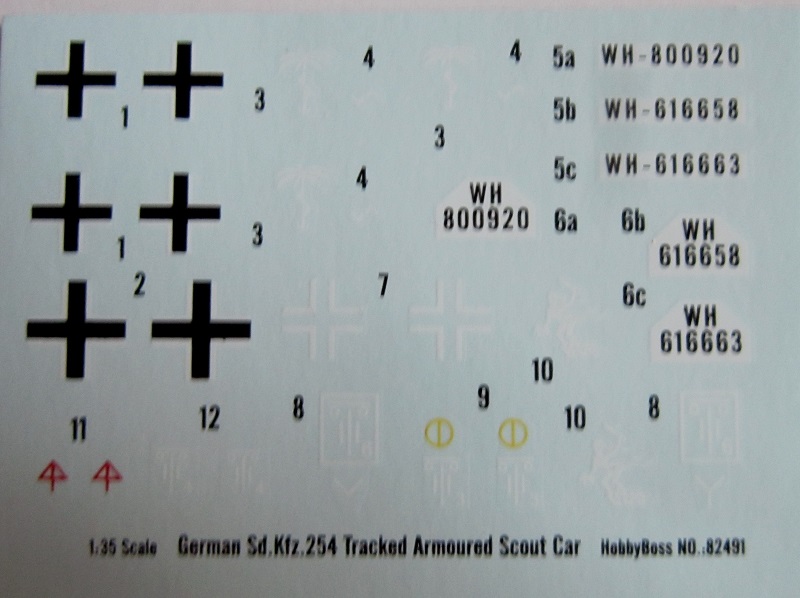 The hatches are all separately molded, but there is no interior detail other than the vision slit housings and no crew figures. So the box art is miss-leading showing crew figures. 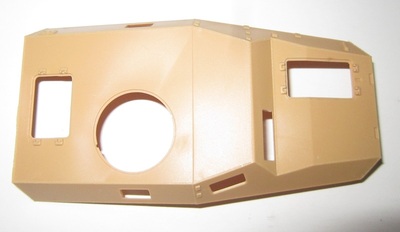 This kit is rather complicated with a lot of parts. I recommend it to modelers with some advanced building skills. I wish the kit had been designed that you could move the wheels or treads up or down. You have to opt for one way or the other and glue them solid….sigh.