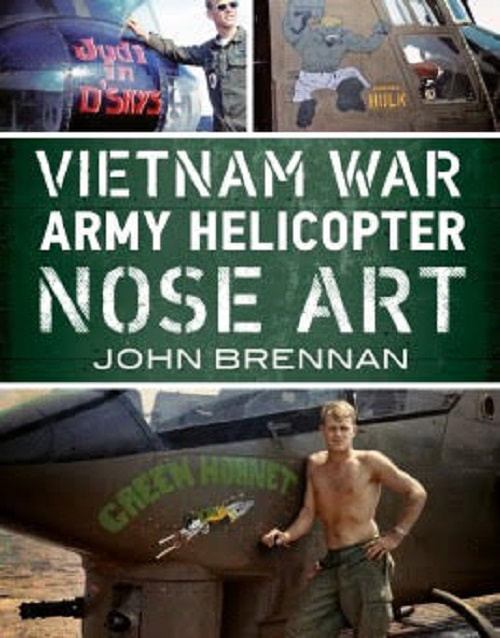 Fonthill Media is based in England.

It contains 199 color photos, including the front and back covers and 14 color illustrations of personal nick-names and characters that adorned the noses of helicopter during the Vietnam War.

The back cover shows helicopter with the nick names: "Superstar" & "Super Huey".

Nose arts and nicknames shown are:

The front of the book has a glossery of terms and a preface. The back has an epilog and appendix.

Vietnam War Army Helicopter Nose Art brings to light over 250 recently recovered Vietnam war photographs from Army abviation veterans. The vast majority of these photos habve never before been published, with them all capturing that quintessential and unmistakable American war custom of embellishing one's assigned aircraft with personalized markings.

Against a backdrop of censorship, political correctness, and military directives to the contrary, in-country Army helicopter nose art flourished in Vietnam, and the failure to acknowledge this achetypal convention in any study of Army aviation history demonstrates a lack of respect for the sersonal cost of conflict.

Although "Iron Butterfly" may not be as well-known as "Memphis Belle" or "Enola Gay" from World War II, it nonetheless carried its crews into battle with just as much passion for life and sense of duty as its predecessors. We all know the ugly politics of that war; these pictures show us the human side of it.

John Brennan has authorized six Vietnam War helicopter books. His background in the subject begins with a twelve-month military tour in Vietnam's Mekong Delta region, where he was assigned to the Army's 114th Assault Helicopter Company as a flight operations coordinator.

This was followed by a BA degree in American studies from California State University at Chico. He was subsequently hired by the Smithsonian's National Air & Space Museum Library in Washington, D.C. Later, when the 114th formed an association, Brennan served as historian.

Today, he is retired from federal service and resides with his family in northern California.

This is one neat book. It will be of great interest to modelers and aircraft historians alike.

I want to thank the folks at Casemate Publishing, who sent me this review sample and Fonthill Media as well.

Casemate is the N. American distributor of Fonthill Media books and all their titles can be seen on Casemate's site at:
www.casematepublishing.com