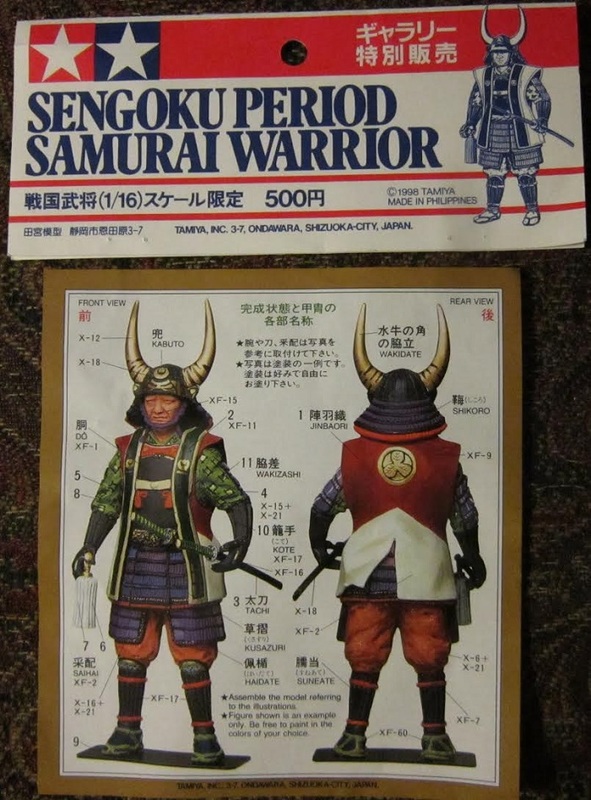 The Sengoku jidai ("warring-states period") was marked by the loosening of samurai culture with people born into other social strata sometimes making names for themselves as warriors and thus becoming de facto samurai. In this turbulent period, bushido ethics became important factors in controlling and maintaining public order.

Japanese war tactics and technologies improved rapidly in the 15th and 16th century. Use of large numbers of infantry called ashigaru ("light-foot", due to their light armor), formed of humble warriors or ordinary people with nagayari (a long lance) or (naginata), was introduced and combined with cavalry in maneuvers. The number of people mobilized in warfare ranged from thousands to hundreds of thousands.

This figure is armed with TACHI (sword) and SAIHAI (tasseled hand signal) in his hands The armor in this kit is called “TOSEI-GUSOKU” and was used in the last of the 16th century in Japan. It is reproduced in detail.

The KABUTO (helmet) is reproduced with WAKIDATE (horns from a buffalo) and HOSHI-KABUTO which is construction of rivets along lines radiating from the center of the top of the head.

The DO (breastplate) is modified from one-piece of steel, called HOTOKE-DO. The parts of the waist and femur armor are armored with KASAZURI and HAIDATE, which is woven small pieces of steel called SANE, together with colorful threads.

There are many styles in JINBAORI (samurai armor). The warriors tried to show their enthusiasm in earnest for fighting.

Tamiya tells modelers of this figure to paint it whatever colors you like.

Tamiya is a older prolific model company based in Shizuoka-City, Japan. They market all manner of model subjects in the popular scales. This kit has a copyright date of 1998 and says that it was molded in the Philippines.

This kit comes in a cello bag that is stapled to a header-card.

WHAT’S IN THE BAG:

The bag contains 11 chalk white parts: the front and back of the figures torso, separate upper arm and fore arm parts, the tasseled signal device, the samurai sword, a dagger handle that glues to his waist band and the base plate. The painting and assembly instructions consist of a small sheet that has a front and rear view of the figure made up. The reverse side of the sheet has CAUTIONS in Japanese and English,  descriptions of the parts of the armor in the two languages, suggested tools and Tamiya brand paints to use to complete the figure.

A second sheet in the bag has IMPORTANT INFORMATION about the model in 13 languages including English.

I took a picture at a IPMS contest years ago of this figure made up and entered in the contest. The guy that did it got a first place award I remember and the painting of it was truly great as you can see here.


This kit can easily be assembled in less than an hour. I have mine all assembled except for the signal device, the samurai sword and the dagger handle, which I want to paint off of him before assembly. I hope I can do a presentable job on the armor. 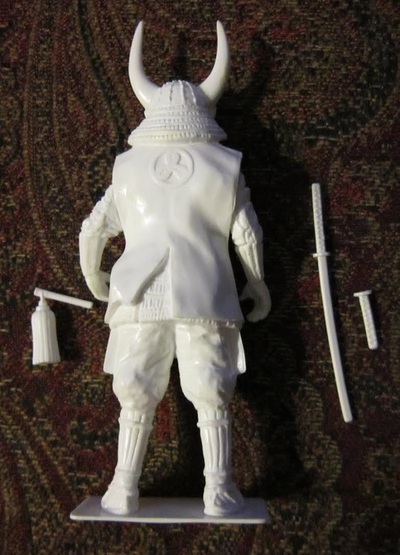 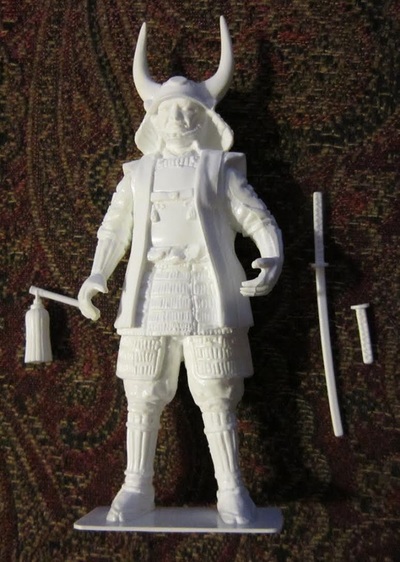