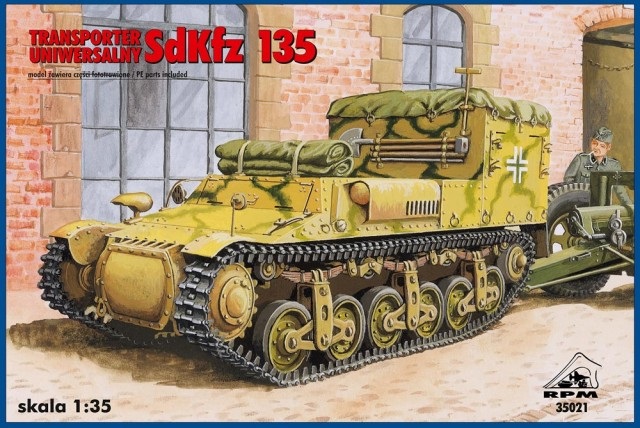 The Lorraine was a French infantry carrier. In the early 1930s the French army required a replacement for their existing Renault light tracked infantry carriers, and the Societe Lorraine, builders of railway rolling stock, developed a vehicle known as the Chenillette Lorraine Type 37L. This was a simple tracked carrier for infantry or cargo, with a two-man crew protected by small cupolas. It carried no armament. Suspension was by three twin bogies on each side, with leaf springs.

A second version, the Chenillete Legere, had two twin bogies, was shorter, and was used solely for infantry work. Production began in 1937, but in 1939 was moved to another factory. This interrupted the flow, and in consequence not many were built.

In 1940 an armored personnel-carrying version was built, with the hull sides built up with armor at the rear to form a protected passenger compartment. After the fall of France, almost all of these vehicles were taken over by the German army and most were then used as a basis for a variety of self-propelled guns, mounting calibers between 75 and 150 mm. Some, like the subject of this kit were used for artillery towing and command vehicles. In German service they were known as the Sd. Kfz. 135.

At the end of the war the French army modified one or two by fitting the British 17 pdr. anti-tank gun in the rear compartment, facing forward between the crew cupolas. The gun could not be fired while on the move and these modified vehicles were more in the nature of mobile anti-tank guns than a self-propelled artillery.

RPM is based in Warsaw, Poland.

The kit comes in a shrink-wrapped tray and lid type box. It is rather BLOUSY, as...when you open it there is a letter 'L' void of some size around the contents.

The box art painting of the kit shows the vehicle parked next to a building with an unidentifiable field piece in tow. Behind the field piece is a German soldier taking a smoke break

There are no figures included in the kit and the canvas covers shown mounted on the vehicle are not in the kit either. The side of the box shows two color profiles of a couple of paint schemes for the vehicle. One is overall panzer gray and the second one is earth yellow with red brown wavy lines.

All the plastic parts trees are in one cello bag. A second cello bag holds the decals, instructions, and a fret of brass PE parts.

None of the parts trees in this kit are either letter coded or numbered on the sprues. You have to use the parts tree drawings on the instructions, and go back and forth between them and the particular parts tree shown to identify each part. This will make for extra time required for building.

Parts also do not display any location pins and associated holes they go in for positioning parts. Most parts are butt joined. So careful dry fitting, before gluing, is definitely in order here.

The colors of the plastic used to mold this kit are almost technicolor in variety. 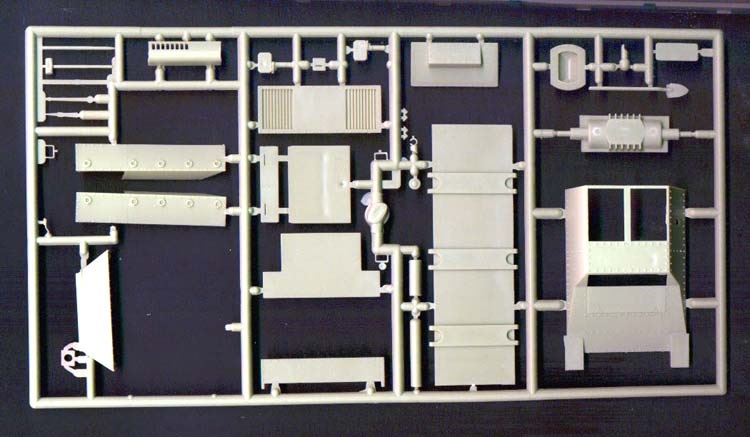 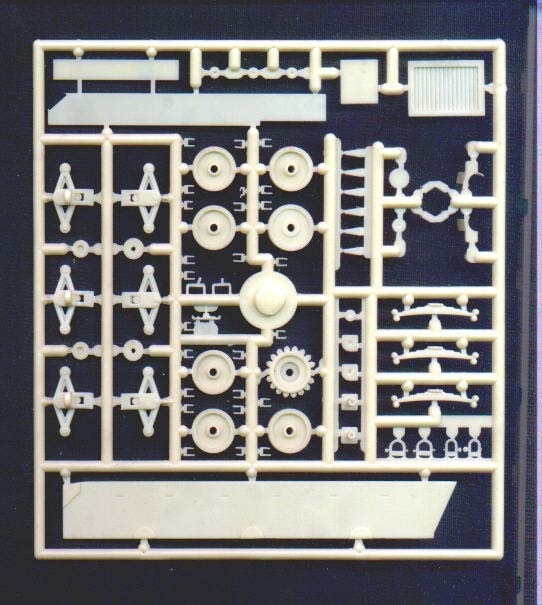 Then comes five, identical, chalk white colored trees, which hold the individual track links. Boy...are these TINY!!! (There are 320 links). One link, on each of these parts trees, is mismolded. So, you really only have 315 good ones. The attachment points holding these teeny links to the sprue, is in five places and they look BIGGER than the links themselves. This is going to be tedious, fiddly work, to get them off the sprue and cleaned up. Something I don't look forward to. 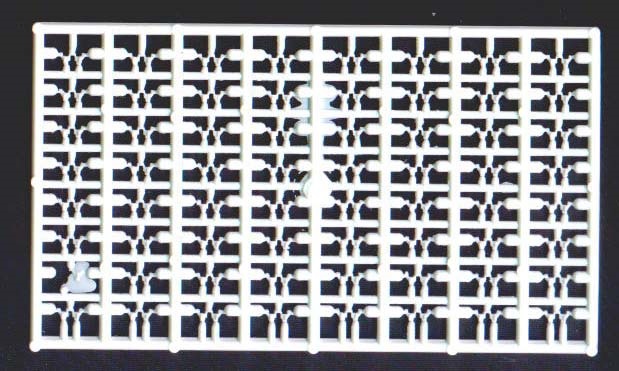 The final sprue in the kit holds: the walls, doors, canvas support frame for the rear open compartment, and a jack. (11 parts here) The parts on this tree all have shallow ejector pin, cup marks, on the face of them (right where it HURTS!). Some sanding and filling will have to be done to eliminate these. RPM could have placed these on the back side and not where all the detail is. Working around the rivet and raised detail will be a chore. 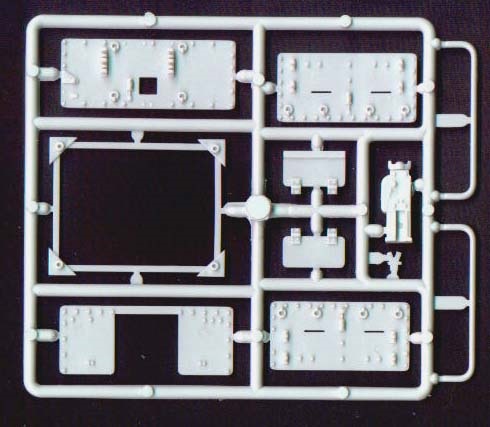 There are no figures included in the kit. Interior detail is very sparce too. There is scope for extra detailing to be added to the kit.


Finally, there is the brass PE fret. I count approximately 188 parts on this fret. There are numerous wing nuts, tie downs, brackets, riveted bands etc. etc. Not ALL these parts are called out on the instructions to be used to make the kit. I suspect this fret is designed to be used in a number of other RPM kits as well as this one. A lot of the parts are teeny weeny too. I wonder how one can handle and glue anything so small!! 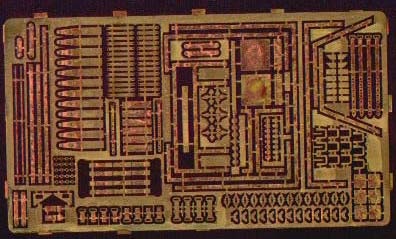 The postage stamp sized decal holds six German national crosses: three are white and three are black. There is also three black 15th Panzer division marks and three Afrika Korps palm tree and swastika emblems, in white. Unfortunatly the white palm trees will not appear in the photo against the white backing paper. Sorry about that. 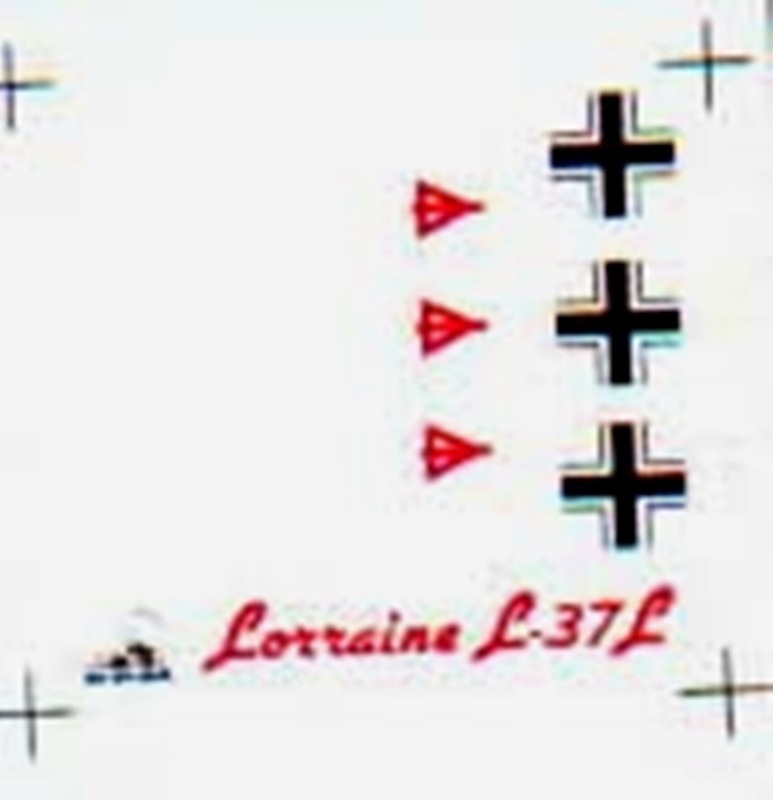 The instructions are 9 1/2" x 6 1/4" page size. The main instructions, for assembly of the plastic parts, are four pages long.

Page one gives the box art, in black and white, next to the history of the vehicle in Polish language only.(the kit is made in Warsaw, Poland). This is followed by painting and decaling drawings. These black and white drawings are the same as the color profiles on the side of the box. The bottom of the page shows two parts tree drawings with the part numbers shown.

The top of page 2 shows two more parts trees drawings and a paint number reference chart. From the bottom of page 2 to page 4 we are given 26 assembly drawings.

Another, single page instruction sheet (printed on both sides) gives us a numbered parts tree drawing for the brass PE fret. Eighteen drawings show how to use some -but not all- of the PE parts. You will definitely have tons of these parts left over for your parts box after fully assembling this kit.

I would grade this kit as fairly good. The teeny track links, ejector pin marks (and some sinks) on parts mentioned earlier are downers. However, the kit should make up nice with a lot of care. But joining things is tedious too.

An Additional sprue of parts is included for the Beobachtungswagen which is also produced by RPM. 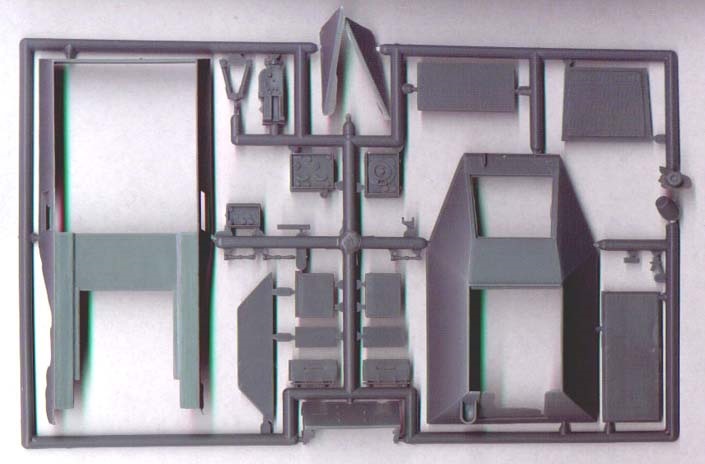 This kit is not recommended for the novice modeler, but OLD PROS should not have too many problems. It is an off-beat subject and should draw some stares on any display shelf. Not something you see every day.

This  kit was purchased from Greatmodels web store years ago before they went out of business. The copyright date is 2000.