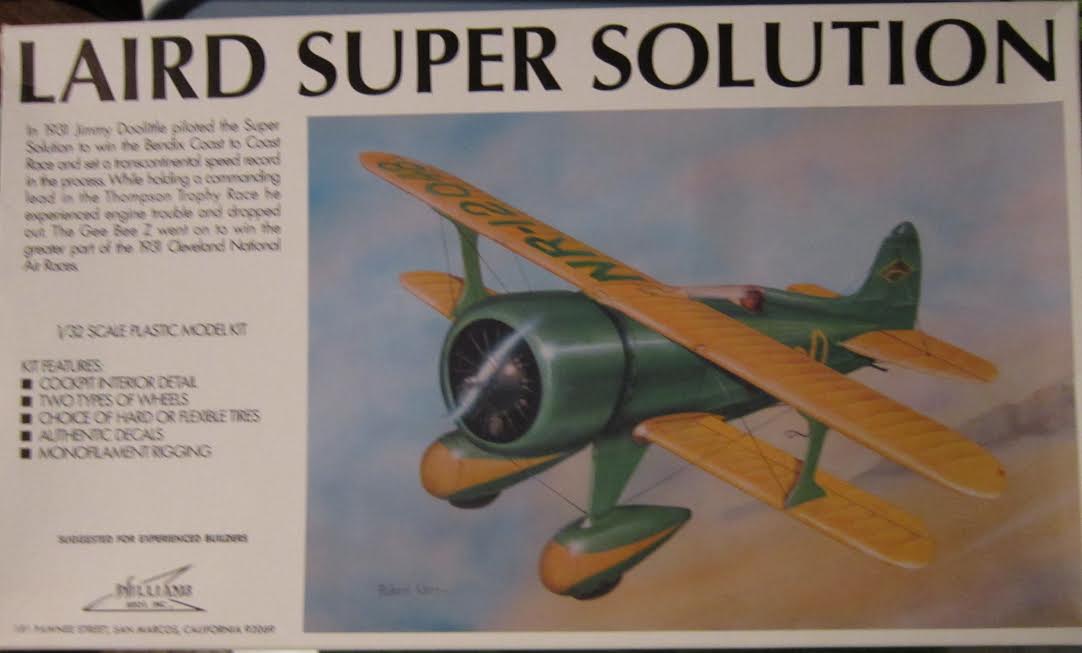 On August 23, 1931, just 5 days prior to leaving fro the start of the Bendix Race, the Super Solution rolled out of Matty Laird’s factory. The little racer glistened with a viridian green fuselage and Kodak yellow wings. The word “Skyways Inc.” appeared on the fuselage sides. Further aft on the fuselage was a large racing number “400”. The cockpit was tucked in behind the engine and the fuel tanks. Large size doors folded down on both sides for entry and quick exit if there was trouble. Forward visibility was not possible, but upwards over the wing ande sidewards it was good.

To insure the highest speeds possible out of the plane, Matty endeavored to minimize frontal area. These Lairds were built for speed. The Super Solution carried a 21 ft. upper wing and an 18 ft. lower wing, with about 108 sq. feet total. Fully loaded, it grossed at about 2,675 lbs, while empty it weighed 1,780 lbs.

Jimmy Doolittle was first to test fly the airplane & noted that the engine’s high torque did not create any difficult control problems. However, the large 9 ft. propeller appeared to have quite a BLANKING effect on the control surfaces, especially during landing, resulting in difficulty getting the tail all the way down.

Matty Laird flew the next series of test flights, having flown the Solution, as well as every other Laird aircraft made. He knew what to expect of his new design. His first flight was impressive and included several high speed passes over the airport for calibrating speeds. After taxiing in, he confirmed Jimmy’s findings that the airplane HUNTED at high speed. The suspected cause of this directional instability was the streamlining on the gear vees, since these parts were all forward of the center of gravity. It was thought that they were countering the stability provided by the fin and rudder.

By removing the fairings on the gear vees, and the wheel pants, and then flying the aircraft again, Matty was able to determine how much area to add to the vertical surfaces. The Super Solution was rolled out the next morning and Matty jumped in for a 20 minute flight test, verifying rigging settings. On the 27th of August, the airplane was flown to Ford Field, Lansing Illinois, where the fuel tanks were topped off. Jimmy sped out southwest, bound for Burbank, California and the start of the Bendix Race.

Following the epo9chal flight on September 4th, from coast to coast, winning the Bendix and setting a transcontinental speed record in the process, Jimmy refueled and returned to Cleveland. His voyage covering 2,882 miles, was one of the longest continuous solo flights of the time. It was a remarkable credit to both his physical stamina and the design of the yellow and green racer.

Laird and Pratt & Whitney workers started preparations for the Thompson Trophy Race. Subsequent inspection of the wing’s spar, attaching it to the fuselage cabane members had elongated. Apparently, side loads on the landing gear transmitted a compressive overload on the spar. The elongated bolt holes permitted the wings to shift slightly laterally, causing the wing heaviness. As a temporary fix, a piece of steel was driven into the cabane fitting.

Matty flew a 15 minute test flight and observed that it was indeed difficult to get the airplane out of a simulated left-hand pylon turn. This became critical, and safe control of the airplane was not possible. The Super Solution racer was rigged slightly right wing heavy to assist in recovery from left turns around the pylons. But, the engine was a little too tired from its full throttle run across the United States. Despite an early commanding lead on the field, the Super Solution started to trail black smoke on the second lap. Jimmy dropped out of the race on the seventh lap with a hole in a piston and a cracked head. Lowell Bayles went on to win the race in the Gee Bee model Z.
​THE KIT:

Williams Brothers had a changing of the guard, in December of 2004. After 45 years in business, and founded by the late, original brothers Larry and Gainger, the immediate family could not continue the business. So, in March of 2005, all rights and assets required to produce the original products were purchased and moved from Los Osos, CA to Taylor, TX by Brett Industries, Inc.

To sustain the legacy of the original founders, the parent corporation will continue to operate under the brand name of “Williams Brothers Model Products”. The return of the products back to production began in August of 2005, with shipments starting in late August.

With nearly 200 products needed, production will focus priorities in the order of wheels, guns, pilots, engines, aircraft kits, HO kits and accessories until inventory can sustain operations at reasonable levels.

At the time that my 20 year old kit was produced in the 80’s, Williams Bros. was based in San Marcos, California.

The kit comes in an end-opening type box. The boxart shows the Laird Super Solution flying along over a landscape (probably on the Bendix run?). It has the green fuselage and yellow wings already mentioned the word “Skyways Inc.” in black cursic lettering outlined in white with 2 red flamingos super-imposed over it. on the sides and a yellow racing number “400” just in front of the tail. There is a triangular Laird logo on the tail in yellow outlined in white. Above the Laird logo is the black registration number NR-12084. This number is repeated again in large black letters underneath the left lower wing and on the right upper wing. The racing number “400” appears again in black under the right lower wing. The two bladed propeller is bare metal. The wheel spats have yellow stripes on them.

Side panels of the box give color boxarts of other aircraft kits in the Williams Bros. Line.
In 1/32nd scale: The Hall “Bulldog” racer, the Sparrowhawk fighter, the Seversky P-35/S2 fighter, the Wendell Williams racer and the Gee Bee R-1 and Gee Bee Z racers.
In 1/72nd scale: the Boeing 247 airliner, the Northrop Gamma and the Douglas World Cruiser (shown with wheeled gear).

In 1/48th scale: the Ford Flivver aircraft, the Corben Super Ace and the Pitcairn autogiro.

The back of the box repeats all of these aircraft again as black and white photos of the models made up. Added to the 1/72nd ones is the Curtiss C-46 Commando and the World Cruiser is shown with floats. Four different Pilot figures, offered in various scales and factory painted are shown, four machine guns, three aircraft engines and loose cylinders and wheels.

You could get a price list from Williams Bros. for sending them a self-addressed stamped envelope. There address appears here too.

The bottom of the back of the box has a advertisement for the Ford Flivver aircraft, calling out the kit’s features and a one paragraph history of it. So the box is a virtual catalog for Williams Bros. stuff. However, kit numbers are not given, nor the scales that the pilots, machine guns, engines and cylinders or wheels come in.
​WHAT'S IN THE BOX:

Inside the box is a sealed cello bag containing a large and small chalk white parts tree, a small sealed cello bag with 2 black vinyl tires, the cockpit transparency and a length of monofilament line in it. The decal sheet and instructions complete the kit’s contents.

There is a slip in the kit that says that molder number 5 made and packed the kit. If you find anything wrong with the kit this slip has to be mailed to Williams Bros. along with your complaint.
The instructions consists of a single sheet of 13 ¾” x 8 ½” format, folded in the center of it’s length to fit the box.

The face side of the sheet has the history of the Laird Super Solution, followed by “read before you start”, “painting”, and “construction” instructions and a color listing.

The reverse side has a 3-view line drawing at the top showing marking locations. There is a head-on drawing to aid in rigging. However, you will also have to study the boxart to get some of these rigging wires angled correctly. One busy exploded parts drawing is for assembly of everything. 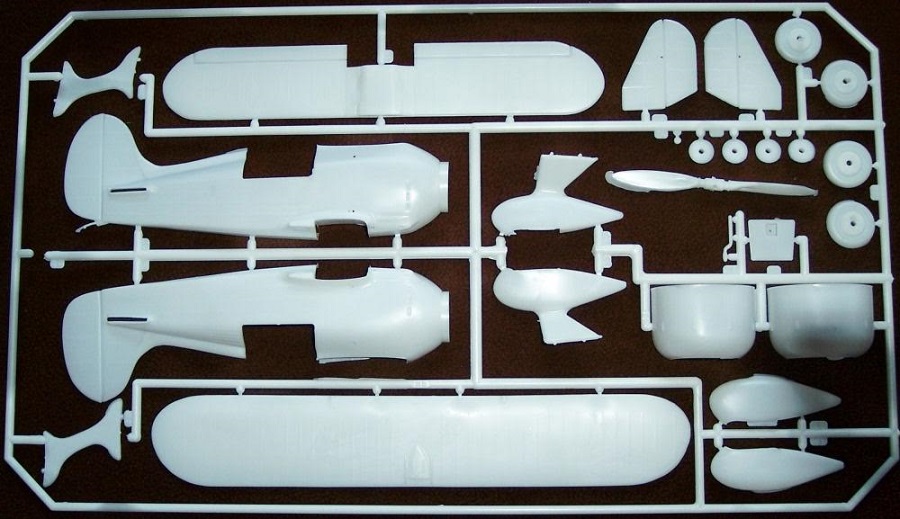 ​The small chalk white tree holds: the pilot seat (this is scored and must be folded into the seat, backrest and sides), a bulkhead, instrument panel, engine exhaust pipes, engine push rods, cylinders and crankcase parts (27 parts).

​Next are the 2 alternate black vinyl tires, the one piece cockpit canopy and the length of clear monofilament line to do the rigging. 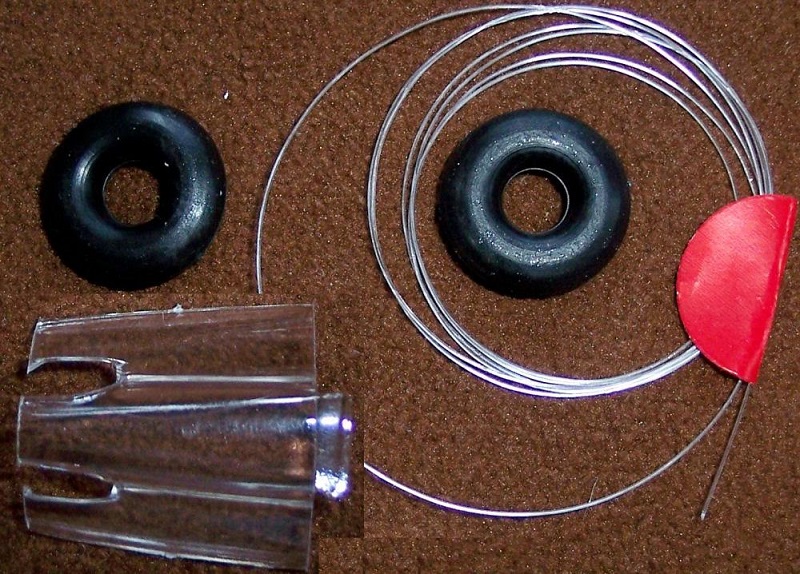 The decal sheet (already described above) completes the kit’s contents. It includes a instrument panel and oval logos to go on the propeller blades. The decal sheet is by Scale Master in their Invisa-clear type decals and printed by Vitachrome. 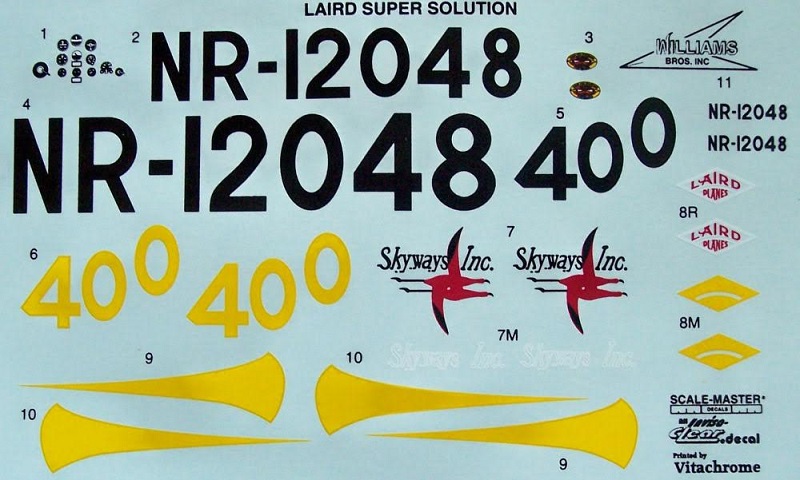 ​Williams Bros. racing aircraft are the ONLY deviation I have made of “Strictly WWII only” aircraft kits. They are just so neat.

I hope they someday market the Hughes racer too.

I recommend this kit to modelers that have a few other aircraft kits under their belts, as it’s construction takes some extra work.