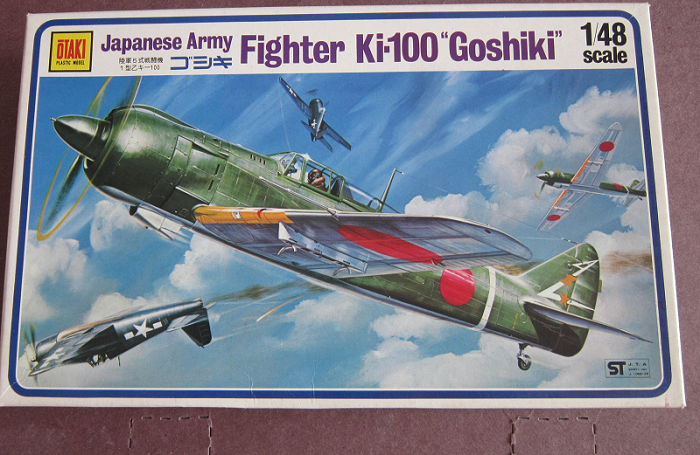 Kit first appeared in 1974 and was re-released 4 times since (including my kit with a copyright date of 1975. It last appeared from Otaki in 1985. It is out of production now.

The Kawasaki Ki-100 was a fighter aircraft used by the Imperial Japanese Army Air Service in World War II. The Japanese Army designation was "Type 5 Fighter"Go-shiki sentouki or abbreviated as Goshikisen). No new Allied code name was assigned to this type; 275 Ki-100 air frames were built as Ki-61s before being modified to accept a radial engine in place of the original inline engine.

The emergency measure of adapting a Ki-61-II-KAI fighter to carry a Mitsubishi radial engine resulted in one of the best interceptors used by the Army during the entire war. It combined excellent power and maneuverability  and, although its high-altitude performance against the USAAF Boeing B-29 Superfortress heavy bombers was limited by the lack of an efficient supercharger, it performed better than most other IJAAF fighters.

Operational missions began in March 1945. From the first engagements, the Ki-100 performed well against the B-29 and showed itself to be equally effective against U.S. Navy carrier fighters. A new variant, the Ki-100-Ib, was produced during the last weeks of the war in time to equip five sentai for home defense duties.

In mid-1944, the Ki-61 was one of the best fighters of the Imperial Japanese Army Air Service. It was the only production Japanese fighter to have an inline power plant (the Kawasaki Ha-40, a Japanese adaptation of the German Daimler-Benz DB 601 engine) during World War II, as well as the first one with factory-installed armor and self-sealing fuel tanks.

It also had respectable performance, more in line with contemporary American and European designs of the time, with speed and rate of climb emphasized instead of maneuverability and range. It was an effective design, but suffered from engine shortages and reliability problems.

These problems as well as the performance advantage of enemy fighters, especially the Grumman F6F Hellcat, led to the development of an improved model, the Ki-61-II (later Ki-61-II-KAI), powered by the new 1,120 kW (1,500 hp) Kawasaki Ha-140 engine, which was unfortunately heavier than the Ki-61-I-KAIc it replaced.

Maximum speed increased from 590 km/h (370 mph) to 610 km/h (380 mph) and general performance (except rate of climb) improved as well. However, it was never able to perform as planned due to the continued degradation of quality of the engine's assembly line, with far fewer engines produced than were required, while many of the engines that were built were rejected due to poor build quality.

At this point of the war, the IJAAF was in desperate need of effective interceptors to stop the enemy bomber raids over the Japanese mainland, so in October 1944 it was ordered that a 1,120 kW (1,500 hp) Mitsubishi Ha-112-II (Kinsei ["Venus"] 60 series), a 14-cylinder, two-row radial engine should be installed in those air frames.

The need for the re-engined fighter was made yet more urgent on 19 January 1945, when a B-29 raid destroyed the engine's production plant, leaving 275 finished Ki-61s without a power plant.

The Mitsubishi Ha-112-II was some 54 kg (120 lb) lighter than the Ha-140 and produced the same power more reliably. After the study of an imported Fw 190A, an example of an aircraft in which a wide radial engine had been successfully installed in a narrow air frame, three Ki-61-II-KAI air frames were modified to carry this engine and to serve as prototypes.

Three engineers, Takeo Doi, chief engineer and head of project, his assistant Makato Owada, and head of engine systems at Kawasaki Kagamigahara, Tomio Oguchi, worked through several concepts for redesigning the Ki-61 airframe to accept the new engine before settling on a solution in which a second skin fairing was riveted to the fuselage to smooth out the airflow behind the adjustable cooling flaps and multiple exhaust stubs of the new engine cowling.

At first, there were problems with the aircraft now being found to be very tail-heavy, but the removal of a large lead counterbalance, which had been placed in the Ki-61-II-KAI's rear fuselage to balance the increasingly heavy Ha-140 engine, restored the center of gravity (cg).

This had an immediate positive effect on the flight characteristics, enhancing landing and takeoff qualities as well as imparting increased maneuverability, including a tighter turning circle.

The army general staff was amazed by the flight characteristics of the plane, which surpassed the Hien's in all but maximum speed (degraded by a maximum of 29 km/h [18 mph] by the larger area of the radial engine's front cowling), and the model was ordered to be put in production as the Goshikisen (Go = five; shiki = type; sentoki = fighter) or Army Fighter Type 5.

The company's name was Ki-100-1-Ko. All of the air frames were re-manufactured from Ki-61-II Kai and Ki-61-III air frames; the integral engine mount/cowling side panel was cut off the fuselage and a tubular steel engine mount was bolted to the firewall/bulkhead.

Many of the redundant fittings from the liquid-cooled engine, such as the ventral radiator shutter actuator, were still kept. The first 271 aircraft, or Ki-100-1-Ko, with the raised "razorback" rear fuselage were rolled out of the factory between March and June 1945. A further 118 Ki-100 I-Otsu were built with a cut-down rear fuselage and new rear-view canopy from May through to the end of July 1945. This version also featured a modified oil cooler under the engine in a more streamlined fairing.

The engine was reliable in contrast to the mechanical nightmares of the Nakajima Ki-84, Kawasaki Ki-61, and Kawanishi N1K-J that kept many aircraft grounded.[7] Although slow in level flight for 1945, unlike most Japanese fighters, the Ki-100 could dive with P-51 Mustangs and hold the speed on pullout.

Two problems which hampered the effective employment of Japanese fighters towards the end of the war were unreliable electrical systems; that of the Ki-100 was less problematic than most other aircraft types, although the fuse-boxes caused problems; and poor radio communications, which was generic throughout the war.

Improvement of the basic model led to the Ki-100-II, with a turbocharged engine for high-altitude interception of the B-29 Superfortresses, but only three examples were built, and it never saw combat.
​THE KIT:

Otaki was a model company based in Japan. I believe they have gone out of business.

The box art shows 2 Ki-100's dog-fighting with 2 Hellcats. One Hellcat is going down in flames. Both Ki-100's are dark-green over light-gray undercarriage, with yellow wing leading edges.

The nearest one has a narrow white fuselage band a white chevron looking insignia with 2 yellow stars on it on the rudder sides.

A sticker on the box says the kit was imported by Scale Craft Models in Northridge, CA. 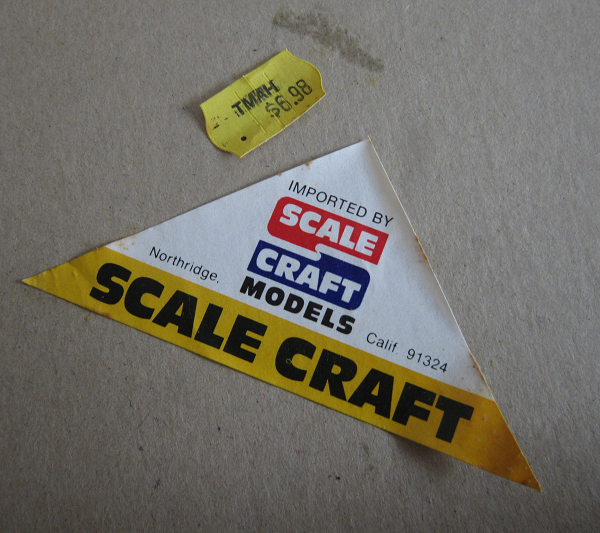 ​One side panel shows 2 small color profiles of other Ki-100 schemes. Both are dark-green over light-gray
undercarriages. One has a white chevron looking symbol over a white 39 on the rudder sides.

The other one is in the same colors with a white no. 296 and a yellow diagonal band outlined in white on its rudder sides.

No kit numbers are shown for these 5 kits.

The first instruction sheet consists of a single sheet folded in the center to create 4 pages in 7 1/2" x 11" page format, folded again to fit the box. It is printed all in Japanese.

Page 1 has the parts trees illustrations.

Page 4 has 3 profiles of 3 schemes (all already described above).

The second instruction sheet is also 7 1/2" x 11", printed on one side in English. It has the assembly instruction all as just text.

The third instruction sheet is the same size as the other two instructions. It is printed in color. It has profiles of the Ki-100 no. 196 and Ki-100 no. 39 (already described above). 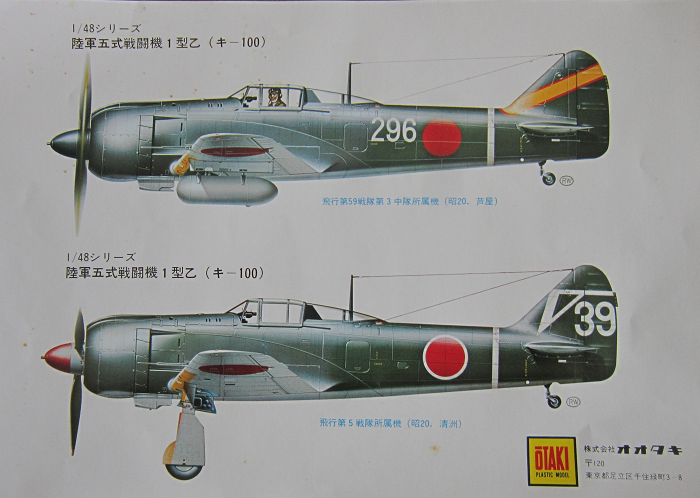 ​Part trees are alphabetized and illustrated in the instructions and have part number tabs next to the parts on them. 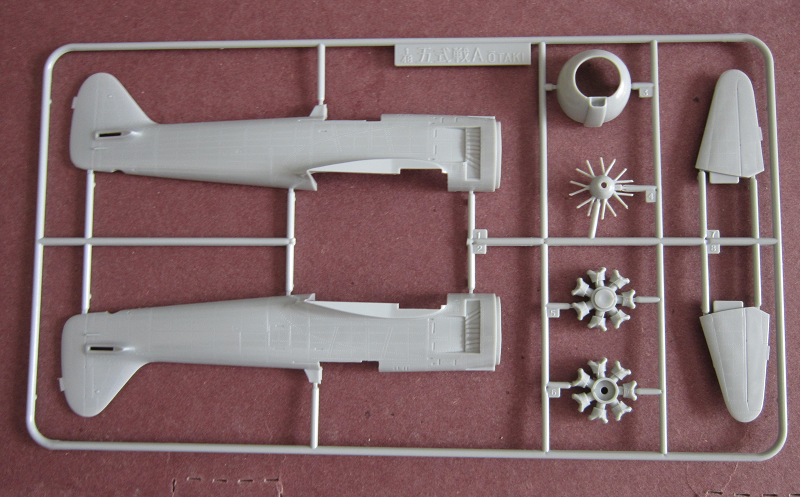 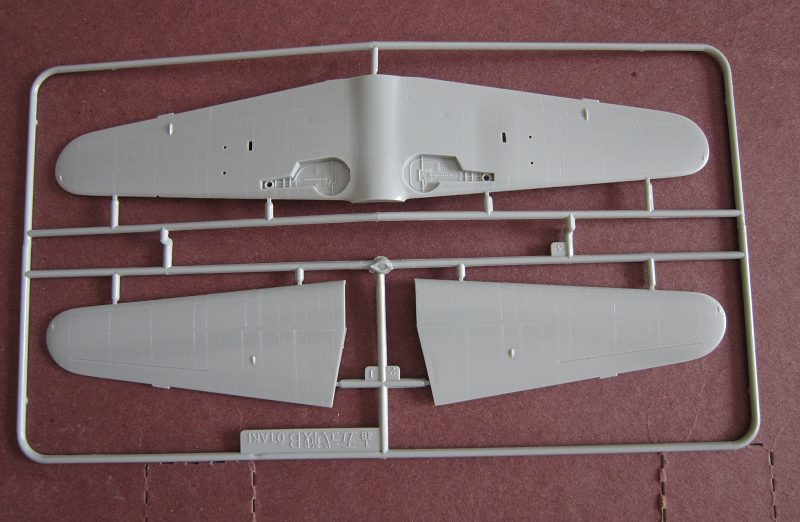 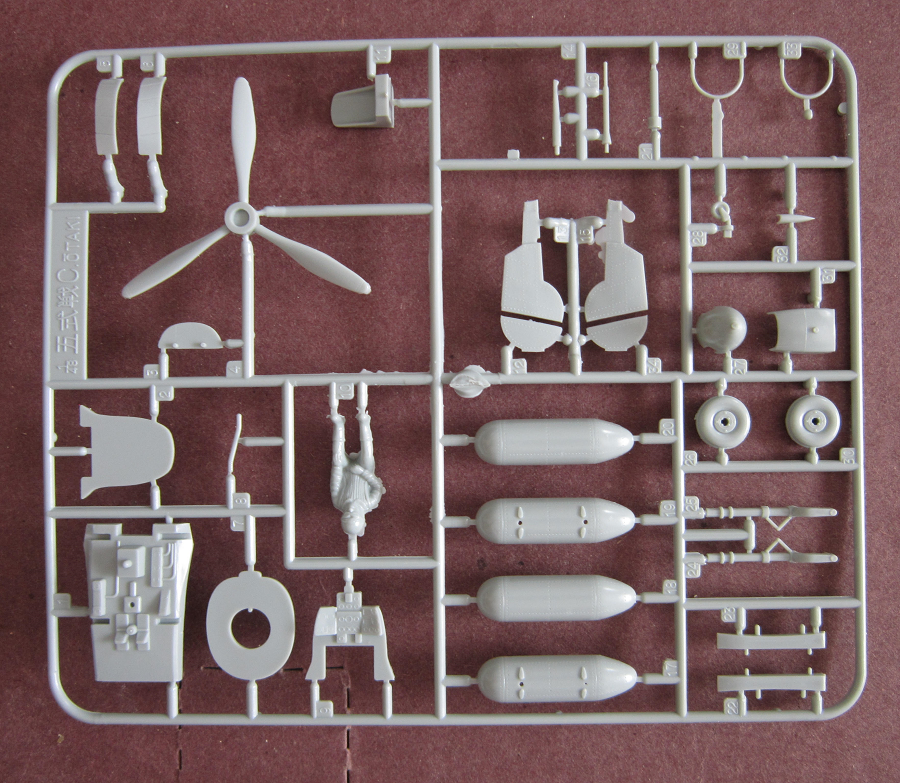 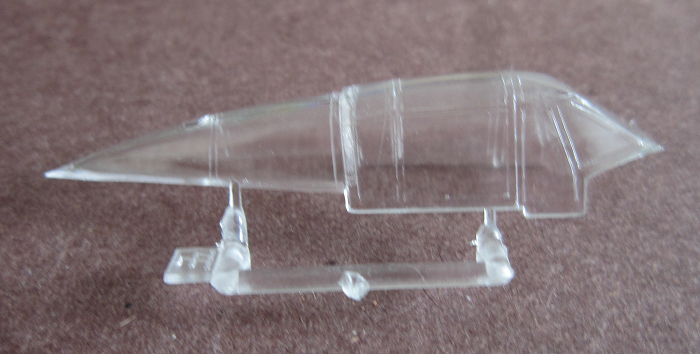 ​The decal sheet completes the kits contents. There are 4 extra tail markings on it. 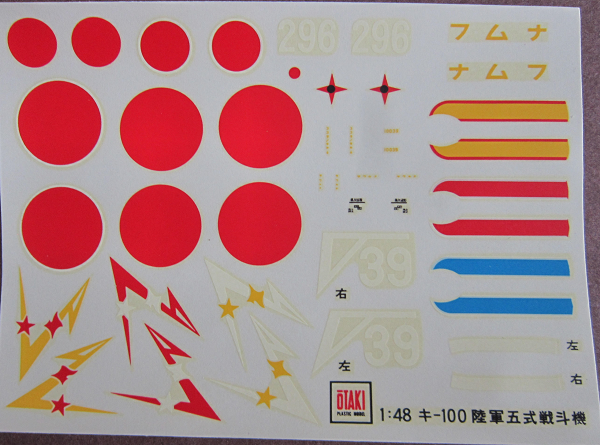