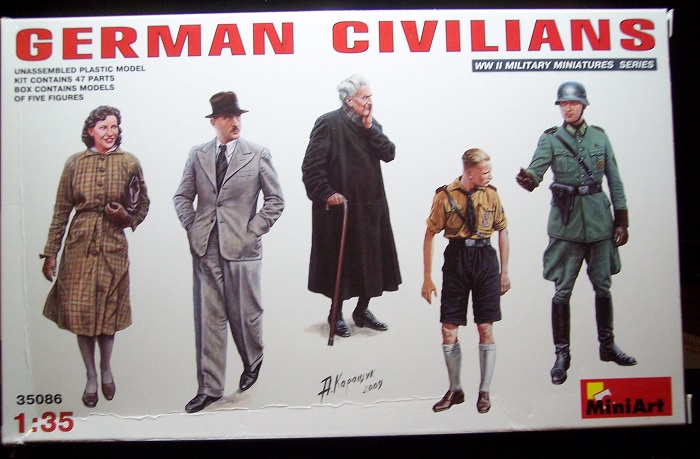 
This kit comes in a shrink-wrapped end-opening type box. I am no fan of this type of box, as parts inevitably seem to find their way past the end flaps to become lost forever. Give me a tray and lid type box any day of the week.


The box art shows 5 figures posed against an all-white background, very similar to the way that Tamiya does all their box arts. Also on this box art is that it contains 47 parts

The figures shown are a young woman, a middle-aged man, an elderly woman, a Hitler youth and a military policeman.

The young woman is dressed in a green ocher, full length dress that has a checked pattern to it.


The middle aged man is wearing a dapper light gray suit with a black hat, white shirt and striped tie. He matches motion pictures that I have seen on the History channel of Adolf Hitler that his mistress Eva Braun took at his mountain retreat house. He has a little mustache in the illustration, so I think the box artist WAS trying to depict him.


The elderly lady is dressed in a long black over-coat and walking with a cane. I saw a black and white photo on the internet of this same woman in that exact pose with the cane. She is holding her left hand up to her chin.


The Hitler Youth is blond haired and wearing a short sleeved light tan shirt with a red neckerchief and shoulder boards. He has a black belt with silver buckle holding up a pair of black knee length shorts. He has knee high white socks over brown shoes.


The military policeman is wearing a  gray-green uniform  with jodfer pants, black jack boots, black belt with steel buckle, a pistol holster, a strap across his chest, black shoulder boards, and sleeve cuffs and collar with silver insignia. He appears to have something in his right hand that is extended.


These figures are all repeated on the back of the box. An exception is a second illustration of the policeman. He is in an optional pose with his arms extended out like he is directing traffic. He also has his head turned to the left and is wearing an optional Shako Visor Hat.


The back of the box is in full color and serves as the assembly and painting instructions, with a paint listing below the illustrations listing Vallejo, Testor, Tamiya, Humbol, Revell and Mr. Color brands of hobby paints in English and Ukrainian.


One side panel of the box has full color box arts of 2 other figure kits that Minart markets. One is of WWII Vehicle drivers (6 figures) They appear to be Russian, British, Germans and Americans, kit no. 35042. The second kit is of German Feldgendarmerie (5 figures) kit no. 35046. Next to these is the statement that the kit is not for children under 3 due to small parts, but is intended for modelers over 14, in 11 languages including English. The copyright date of the kit is said to be 2011 and Miniart’s street and e-mail addresses are provided, along with the statement MADE IN UKRAINE.


The other side panel has a gold self-adhering sticker with white lettering on it giving Model Rectifier Corp name in Edison, New Jersey, that the kit is for 14 year old again and manufactured in the Ukraine.


Next to this is mentioned that it’s an unassembled kit containing 47 parts for 5 figures, for 14 year old and paint and glue are not included. This is repeated 3 times with flags of the Ukraine,  Russia and the U.K., in their languages. 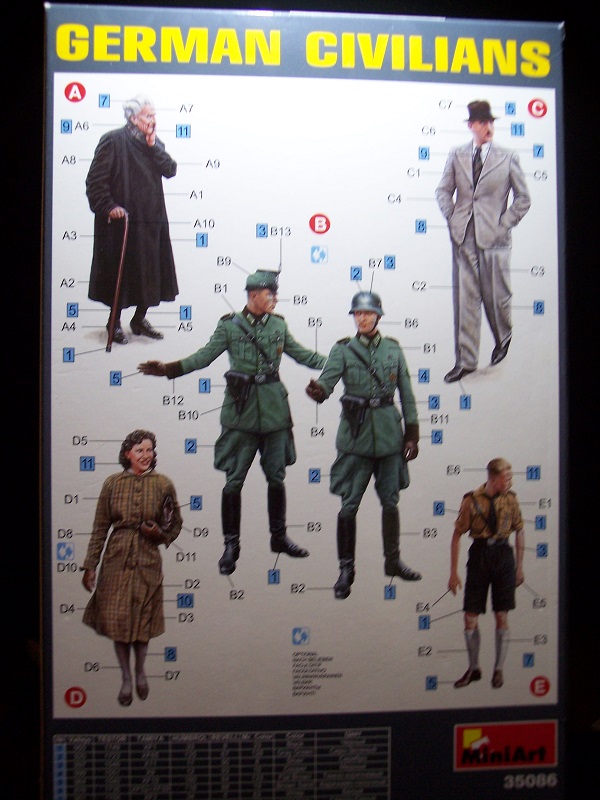 
This kit contains 2 small medium gray parts trees in a sealed cello bag with a small sheet that has the parts trees illustrations on it. The box is way over-sized for what’s inside. The two little trees were down one end of the box with a letter “L” void around them of several inches. Minicraft could have easily packed this in a much smaller box. 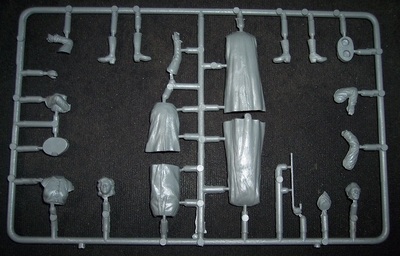 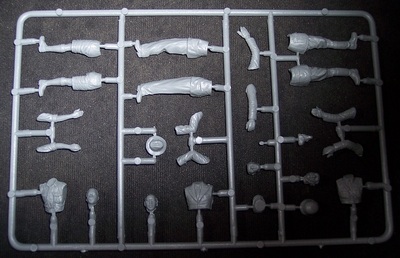 These trees are not alphabetized and do not have part numbers molded on them. So, constant referral to the parts trees illustrations will have to be done to locate parts. Bad move Miniart!


One tree holds: the young female’s parts. She is divided into separate head, torso, dress bottom halves, a plug part that goes under her dress for her two legs to glue into. She carries a purse under her left arm. The elderly female’s parts are also on this tree. She is divided into separate head, overcoat halves, a plug for under the coat to glue her separate legs into, her coat collar and her cane. (21 parts)


The small sheet of parts illustrations completes the kit’s contents. I wish that there had been included a small decal sheet with the Hitler youth sleeve insignia on it to put on the youth’s left arm (as seen on all wartime photos of these kids). The sleeve insignia for the policeman would be welcome on this sheet also.


These figures will fit in nicely in all sorts or diorama ideas. I am thinking of doing a diorama with my kit of the Mercedes 6-wheeled car with Hitler in it being viewed by these civilians standing on the sidewalk. I have a few other civilian figures in another kit that I will add also.


Kit is courtesy of my wallet and I must say it is very overpriced for the little amount of plastic in the kit.