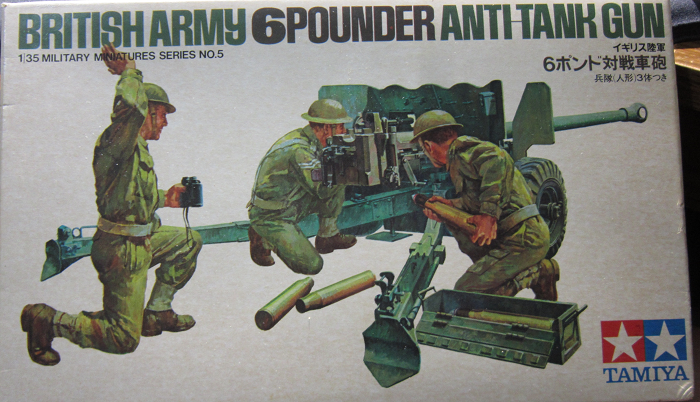 The 6-pounder anti-tank gun was developed from bitter experience of defeat of the British forces at the hands of Germans in the European theater in 1940. At the time, the British forces were armed with tanks and 3-pounders too powerless to do any damage to the German mechanized divisions.

To overcome this inferiority as soon as possible, design of the 6-pounder was completed in a very short period extending only several weeks. At the end of 1940, 6-pounders straight from the production line were rushed to the front to join the actual fighting.

Several variations of the 6-pounder had been active, but none of which differed much from others in its essential parts. The only notable difference especially apparent to these produced after the Mk.II's was a brake newly added to the muzzle.

Due to its extremely simple mechanism, which resulted in precise performance and easy handling, the gun had long been patronized by the British forces. Its essential portion consists of a gun barrel and a semi-automatic tail bloc, while the recoil absorber is made up of an oil-pressure buffer ans springs fixed under the gun barrel.

It uses either an HE or an armor-piercing shell with a firing speed of 20 shots per minute. All its shells have powerful armor-piercing force, each with an initial speed of 815 m/sec.

The gun carriage is a two-wheel open-leg type trailer-truck, usually hauled by a Bren carrier. Originally the Bren carrier was a caterpillar armored vehicle designed to trail a Bren gun or a "Boy" anti-tank gun.

However, it had increasingly become an extensively used, multi-purpose vehicle as time went on. Sometimes, it was mounted with a heavy machine gun, while on other occasions, it performed reconnaissance duty.

The 6-pounder made a debut at the North African front where it was deployed with the British forces in the desert area there, replacing the 2-pounders and the 25 pounders as far as in use. As a matter of fact the 6-pounder had fully displayed its high capability in the fighting in that area. destroying even the German Tiger tank reputed to be a very heavy armored vehicle.

The 6-pounder had since been active in every battlefield. It was sometimes used as a main gun mounted on the Cromwell tank which had been deployed simultaneously with the 6-pounder.

At other times, it was employed on a warship fighting in the sea. Also, it had been extensively used by both the Canadian and the Australian forces of the British Commonwealth.

In 1944, the extremely high-performance 17-pounder anti-tank gun was placed at the front to join the actual fighting. The inferior 6-pounder, therefore, was down-graded to a field gun for the infantry ever since the Normandy landing operation, leaving for duty of an anti-tank gun to the new 17-pounder.

Thus, the 6-pounder, noted for its high-performance at the start of the war, eventually joined the ranks of old-fashioned weapons at the war's termination.

However, the 6-pounder had been the most familiar anti-tank gun ever produced for the British soldiers, thanks to its easy-to-handle structure and trouble-less, stable performance.
THE KIT:

The box art shows the 6 pounder with a 3 man gun crew, posed against one of Tamiya's signature all white backgrounds that they use for the majority of their box arts.

The men are all wearing khaki uniforms with their pant cuffs tucked into gaiters over low shows and all of them are wearing steel helmets.

The 6-pounder is overall olive-drab.

All the men are kneeling on one knee. One man is immediately at the gun firing it.

The next man is to his right and is handing him an ammo round out of a steel container near him. The third man is to the left. He has his right arm raised as if he is giving the firing order and he holds a pair of binoculars in his left hand.

One side panel has a small color repeat of the box art, followed by a paragraph that is all in Japanese, that I assume is maybe the history of the gun. This is then followed by tiny color illustrations of the gun as seen in profile and above.

​The other side panel has 5 color box arts of other armor kits that Tamiya does. I assume to 1/35th scale. These box arts are all color scenery backgrounds. Not Tamiya's usual all white.

A Chieftain Royal Army Tank, A German Tiger I heavy tank, A German Panther Ausf. A tank, A U.S. M4A3E8 Sherman medium tank and a U.S. M42 Duster anti-aircraft gun.
None of these 5 provides a kit number for them. Kit was made in Japan.

Trees are not alphabetized or illustrated in the instructions. They do however have part number tabs next to the parts on the trees. Bad move Tamiya !

The instructions consists of a single-sheet printed on both sides in 7" x 14 1/4", folded 3 times to fit the box.

The face side of the instructions has a black and white wartime photo of a 6-pounder and 5 man crew, set up in a street in Lebeuf France, a industrial town in the Normany area.

Below this is the history of the 6-pounder and 3 more black and white walk around type photos of an actual 6-pounder, over a 2-view of the 6-pounder showing it's front and side. It is in a wave patter of olive-drab and dark green.

I assume these are all to 1/35th scale and not kit numbers for them is provided.
Tamiya's street address in Shizuoka City, Japan is shown.

The reverse side of the instructions has general instructions down a left-hand column, over assembly steps for the 3 crewmen.

Down the right side of the sheet is 6 assembly steps for the 6-pounder.

There are no decals in the kit, as I don't think the 6-pounder was ever marked in any way. 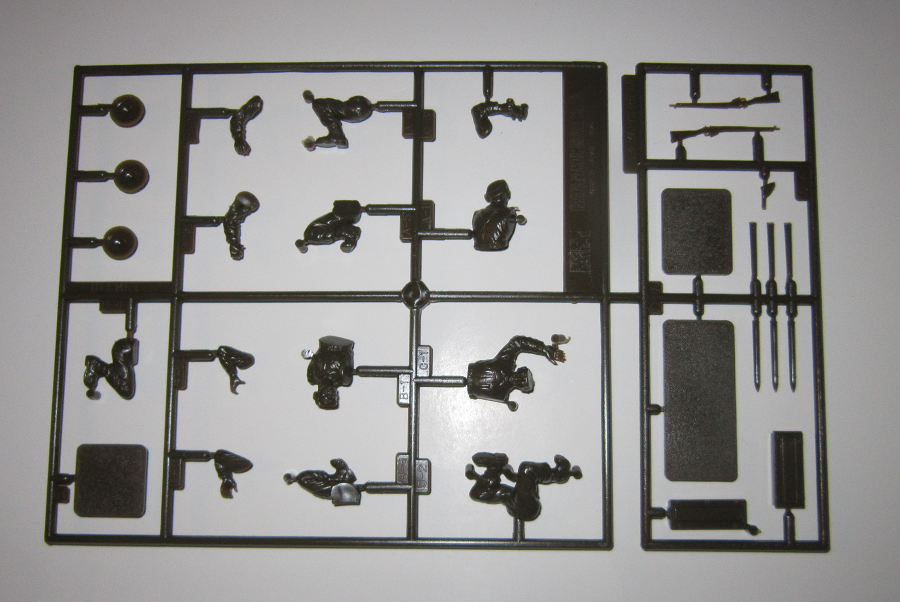 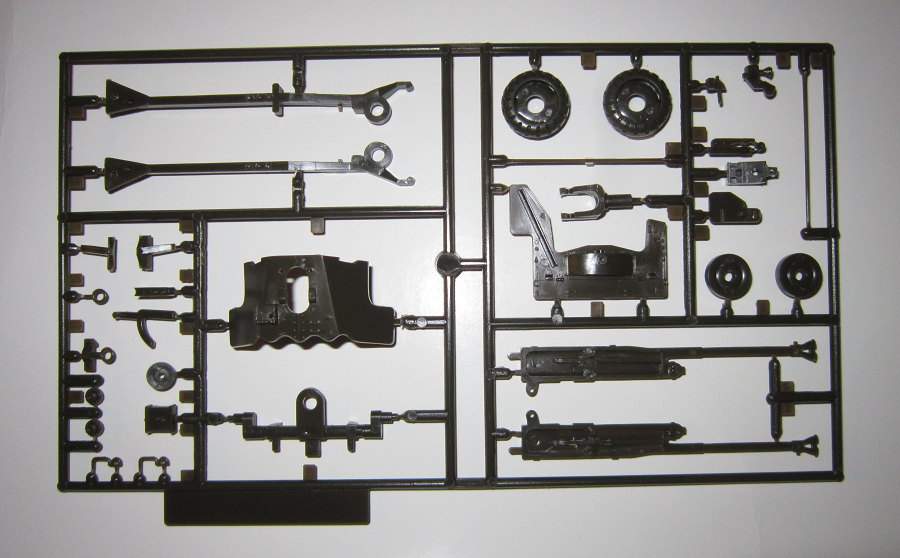 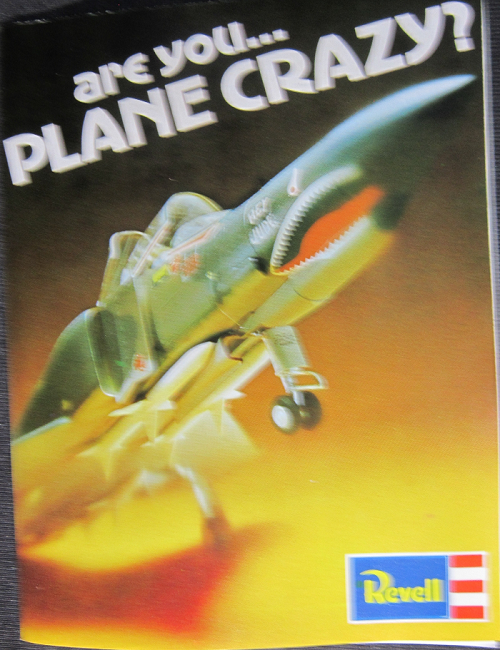