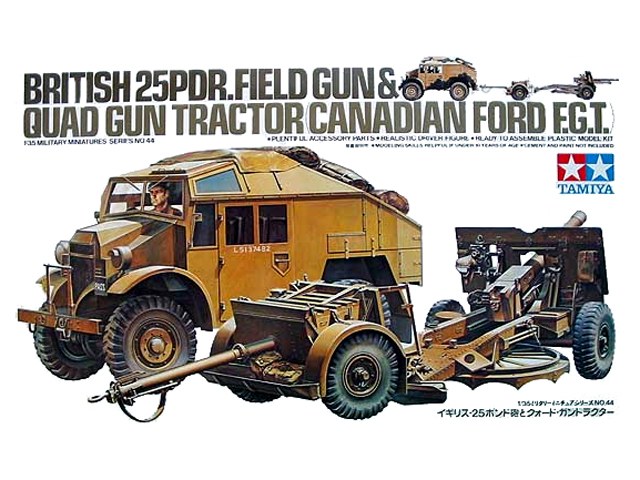 The Quad Gun Tractor was used to tow the 25 pound field gun (Ordnance QF 25 pound) and other artillery pieces of the same size or smaller during WWII.

Like the 25 pound field gun, the Quad Gun Tractor was used in all theaters during the war. Different variants were produced by four manufacturers: Guy Motors, Morris Commercial, Karrier/India, and Canadian Military Pattern (CMP).

Tamiya is a prolific model company based in Japan. They make all manner of model subjects in the popular scales.

This kit comes in a sturdy shrink wrapped tray and lid type box.

The box art shows a Quad gun tractor parked behind a 25 Pdr. gun and it’s ammo limber, posed against an all-white background. The Quad tractor and 25 pdr. and ammo trailer are all in overall khaki green no. 3. There is a yellow disk on the left front fender of the Quad with a black number 10 that is underlined and a black 6 beneath the underline. On the right side of the grill is a black square with white PASS on it. A white serial no. L5137482 is high on the cab doors. A tan tarp is over the roof opening.

One side panel has a color illustration of the Quad, 25 pdr. and the ammo trailer all illustrated from below them. This is followed by a paragraph all in Japanese that I assume is the history of the vehicle and gun. The kit was made in Japan.

The other side panel has 5 color illustrations of box arts of other AFV kits that Tamiya markets. These are all shown against scenery and not the all-white background. Tamiya used to do their box arts that way years ago. These are:

No kit number is shown for these.

The kit contains 6 tan parts trees and a clear part tree in 4 stapled-shut cello bags, a loose tan upper body shell and the cabin floor with fenders. The decal sheet is in one of the cello bags. The instructions complete the kit’s contents.

Page 1 begins with a black and white repeat of the box art. The rest of the page is all in Japanese and I assume it is the history of the vehicle and gun. There are 3 line drawings of variants of the Quad tractor.

Each step has a photo next to it showing the parts in that step assembled. Neat !

Page 11 has three schemes for color and marking the Quad tractor.

The first one is a 2-view with illustrations of the two cabin doors separately. It is overall khaki green no. 3 with a square divided horizontally into a top in red and the bottom half in blue with the white letters AA on it. This goes on the cab doors. Another red and blue square is on the left front fender with a white number 43 on it. To it’s right is a yellow circle with a black number 10 that is underlined and below the underline is a number 6. On the right fender there is a black square with the word PASS in white on it. To the right of that there is a black square with a green maple leaf on it. The 43 insignia is repeated on the left rear of the Quad above the AA insignia and the maple leaf insignia is on the right rear. The front left side of the bumper has a white 14WD on it.

The third scheme is the same khaki green no. 3 with “Mickey Mouse Ears” camouflage over it too., It carries a different division mark on the right front fender of black square with a white fox face on it. The rest of the markings are the same as the second scheme.

We are not told what units these are…at least not in English. The whole instructions is all in Japanese only.

I contacted Tamiya USA and they sent me an e-mail with a web address that had all the pages of the instructions for this kit in English, which I promptly copied and put in the box for later. Very good customer service.

There are no parts tree illustrations in the instructions. However, the trees are alphabetized and numbered. All the trees say MADE IN JAPAN 1974 on them  So, care will have be taken to get the correct parts for each assembly. This will be a daunting task as this kit is highly detailed inside and out. 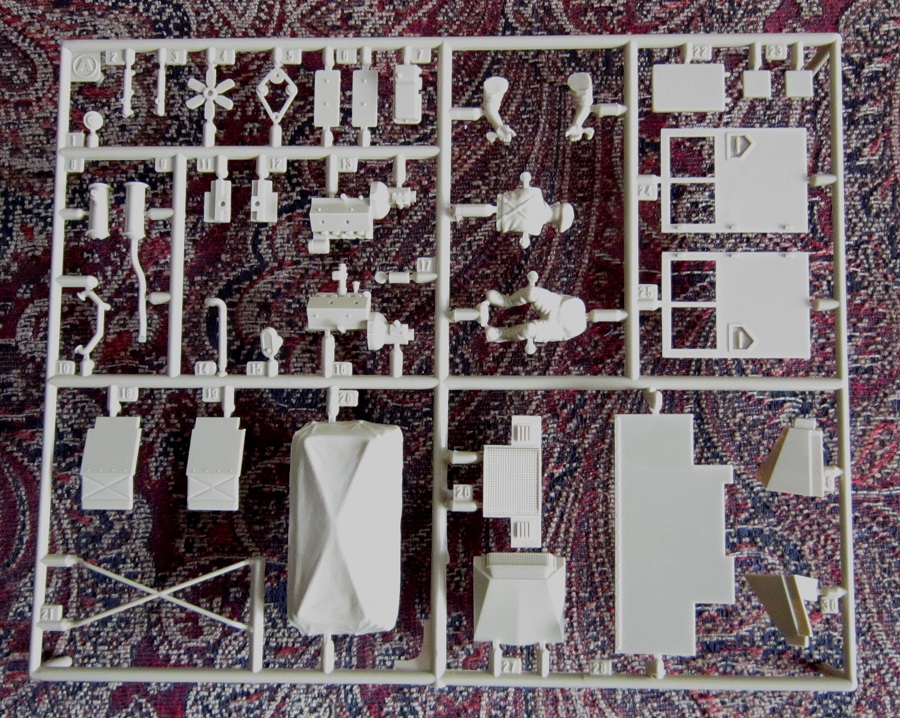 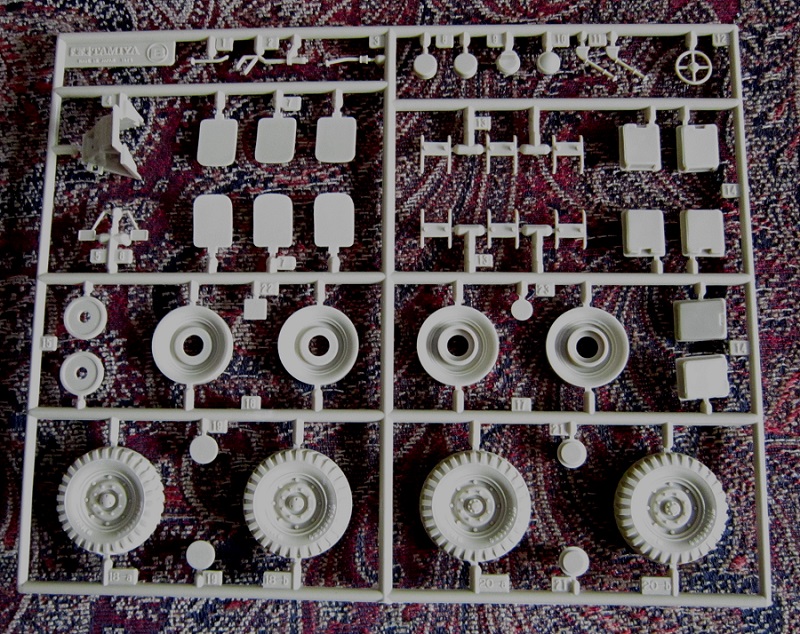 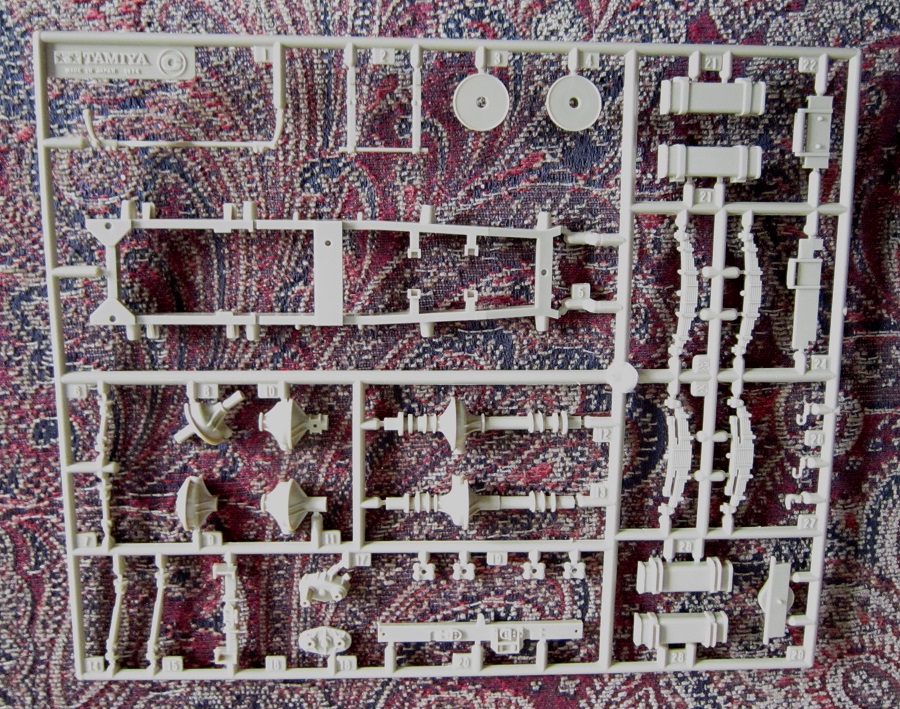 Tan letter D parts tree holds: a helmet and various field packs that go on the sides of the ammo trailer and some tools and one of the trailer wheels. (16 parts) 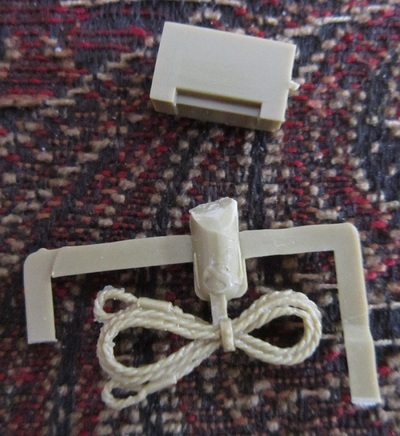 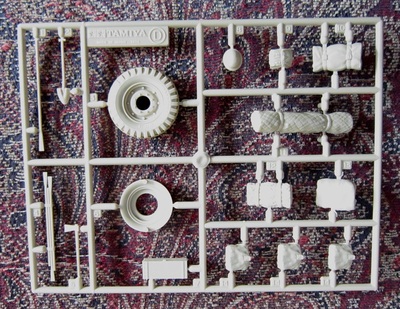 Lettering now jumps to the letter X parts tree. It holds all of the parts for the 25 pdr. gun. (56 parts) A small part tree with just a rolled up tow cable is loose along with a small box. These are both letter X parts. 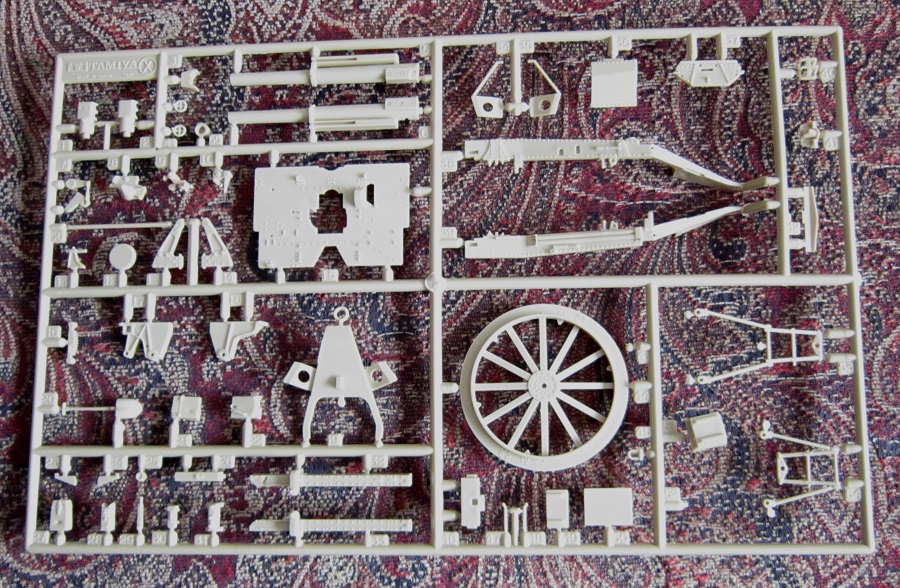 Tan letter Y tree holds: the axle and wheels for the 25 pdr, an ammo box and rounds, all the parts for the ammo trailer (51 parts) 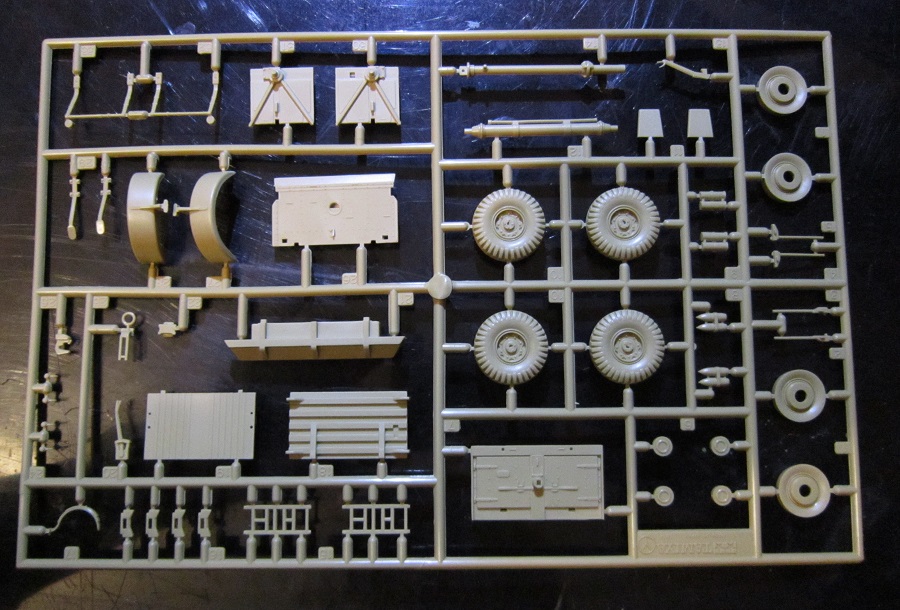 The tan separate cab roof and floor parts are next. They are not alphabetized nor do they need to be. 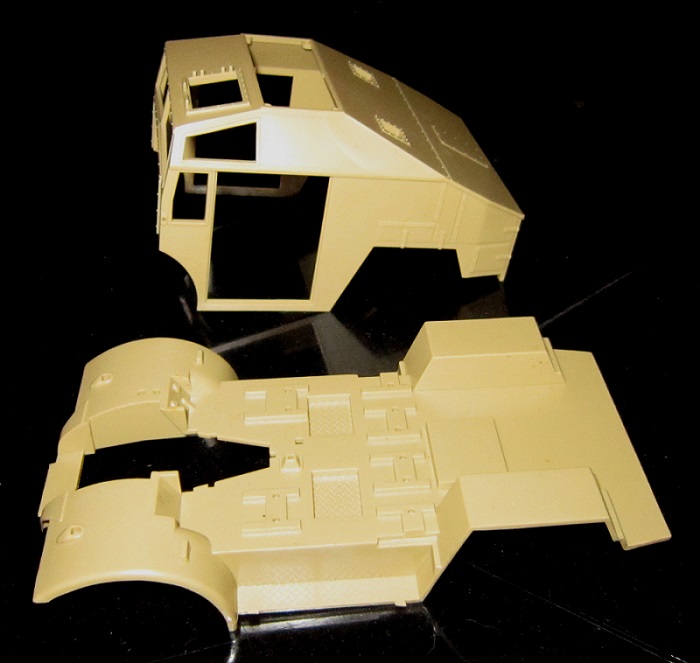 The clear parts tree is not alphabetized. It holds the cab windows (9 parts) 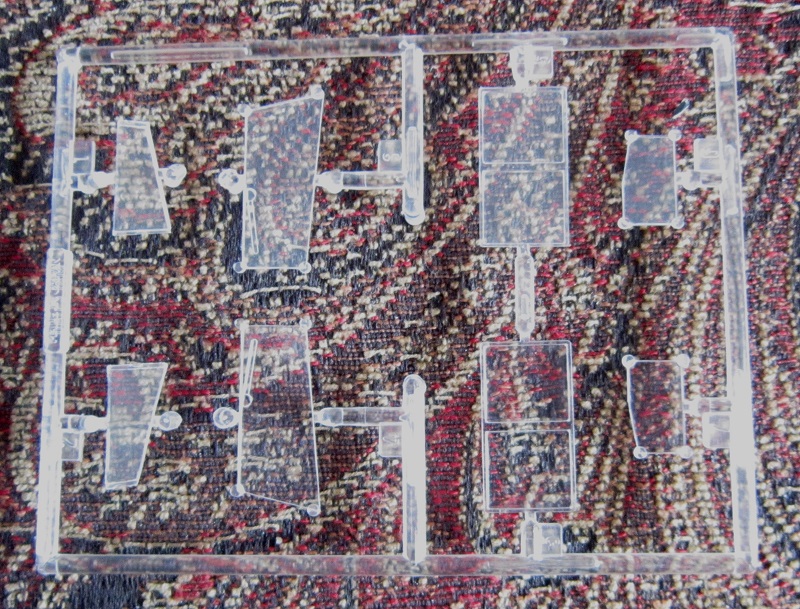 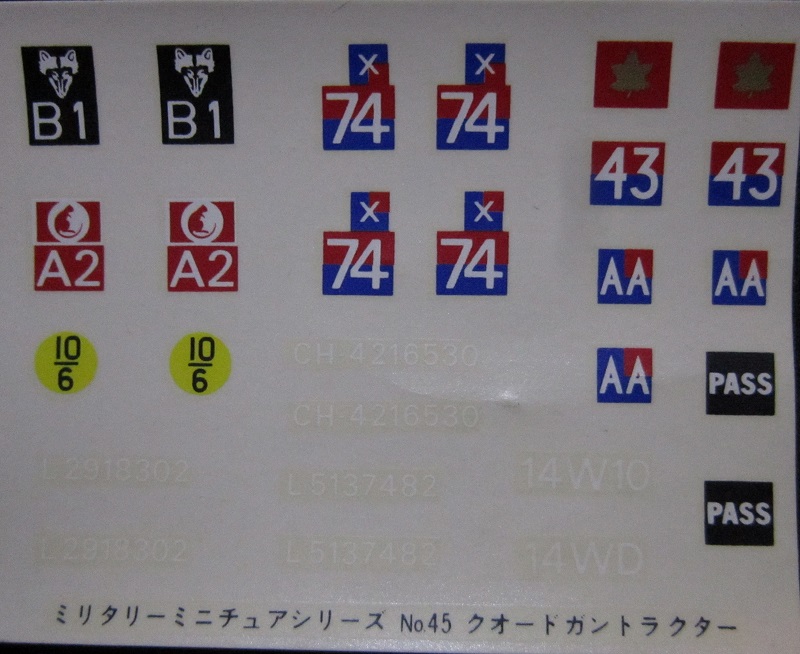 This is a highly detailed kit and way ahead of the state of the art of kits when it came out in 1974.

I recommend it to modelers who have a few other kits of this complexity that they have built.

My kit was courtesy of my wallet.