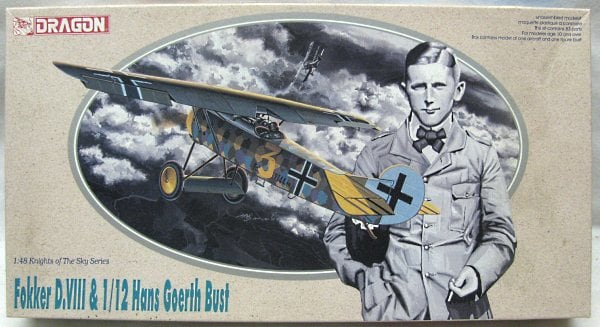 Knights of the Sky Series

The Fokker E.V was a German parasol-monoplane fighter aircraft designed by Reinhold Platz and built by Fokker-Flugzeugwerke. The E.V was the last Fokker design to become operational with the Luftstreitkräfte, entering service in the last months of World War I.

After several fatal accidents due to wing failures, the aircraft was modified and redesignated Fokker D.VIII. Dubbed the Flying Razor by Allied pilots, the D.VIII had the distinction of scoring the last aerial victory of the war.

Vizeflugmeister Hans Goerth was a World War I German flying ace credited with seven confirmed aerial victories. He was the top ace of Marine Feld Jasta III (MFJ III) of the German Naval Air Service, and was one of the few aces allowed to fly the Fokker E.V monoplane.

Goerth received the Iron Cross First Class and other awards for his service. After the war, in 1919, the pilot participated in Kampfgeschwader Sachsenberg, commanded by fellow World War I ace Gotthard Sachsenberg.

Other work: Flew with Kampfgeschwader Sachsenberg in 1919
​THE KIT:

The box art shows a Fokker D.VIII above the clouds on an oval. It is in a lozenge camouflage pattern with a yellow cowling, yellow fuselage number 3 and yellow elevators.

Hans Goerth is illustrated wearing a grey uniform with a black bow tie. His left hand is holding a cigarette and his right hand is in his pocket.

One side panel of the box has one paragraph histories of the D.VIII in 6 languages, including English. Each is labeled with a color illustration of the flag of the country that speaks that language, over features of the kit, followed by CAUTIONS. Kit is for modelers 10 and over. It is not suitable for children under 3 due to small parts.
​The other side panel has 3 color walk-around type photo of the model made up in the box art scheme and one color photo of the Hans Goerth bust made up. Copyright of the kit is given as 1995, over DML's street address in Hong Kong, China and kit was made there.
WHAT'S IN THE BOX:

This kit contains 6 light-grey trees in a sealed clear cello bag, tan resin parts of the Hans Goerth bust in a clear bubble-wrap bag, 2 steel PE frets, each sealed in a clear cello bag and stapled to a cardboard shelf at the end of the tray, a length of steel wire taped down inside the tray, 2 decal sheets, a clear tree and the instructions.

The instructions consists of a single-sheet that accordion-folds out into 8 pages in 8" x 11" page format.

Page 1 begins with a black and white repeat of the box art, over the history of the D.VIII in 6 languages, including English.

Page 2 begins with CAUTIONS about the kit, over a suggested listing of Gunze Sangyo and Italeri brands of hobby paints in the 6 languages, over painting instructions for the Has Goerth bust.

Page 3 through 6 gives a grand total of 11 assembly steps.

Page 7 is the marking and painting instructions for the aircraft. It is the box art scheme (already described above) as a 4-view.

Page 8 has the parts trees illustrations down the left side of it and decal application instructions down the right side, over the copyright date of 1995 and PRINTED IN HONG KONG. Some parts are shown blued-out. Meaning they are excess and not needed to complete the kit. 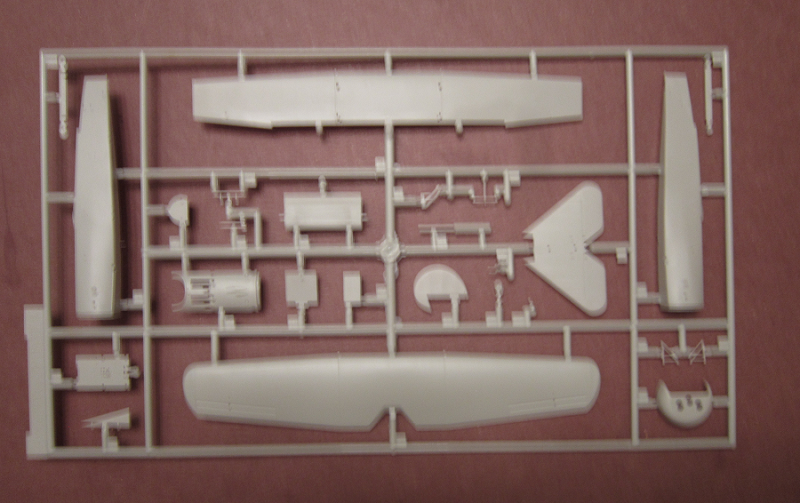 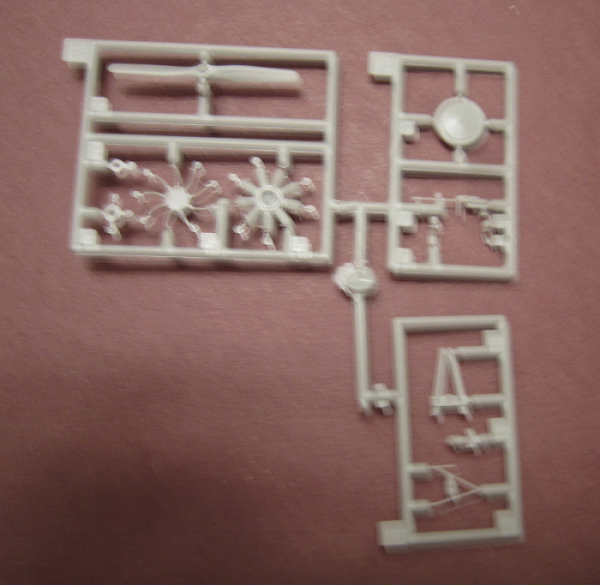 ​Next is the clear windshield (1 part)

​There are 2 decal sheets in a sealed clear cello bag.

The largest one has the lozenge camouflage on it. 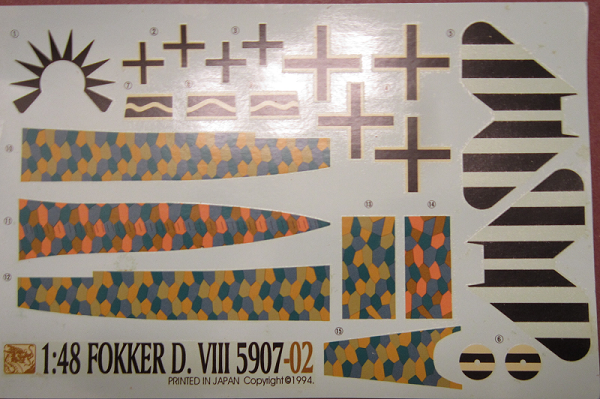 ​The smaller sheet has the yellow 3 fuselage number and some stenciling. 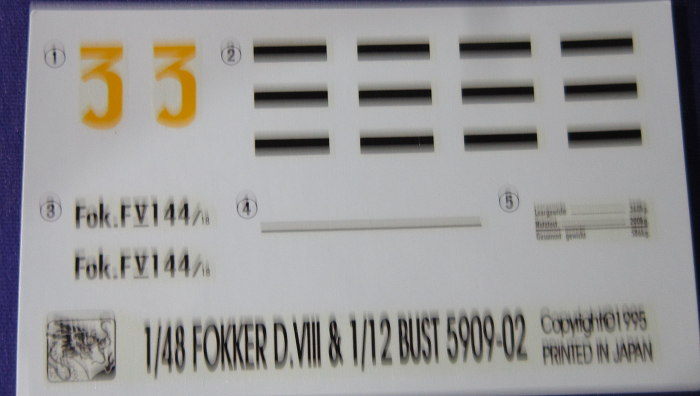 ​The tan resin parts for the Hans Goerth bust consists of a base, head, hat and chest (4 parts) Very well animated and detailed.

The length of steel wire for rigging completes the kit's contents.

​This kit is very highly detailed. It has minimal engraved detail though and all flaps are molded solid.\