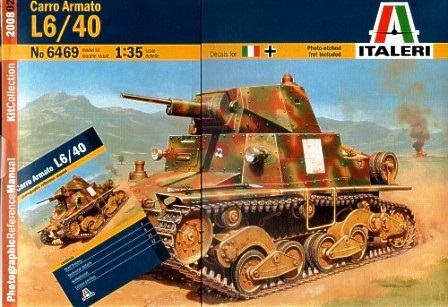 The Fiat L6/40 was a light tank used by the Italian Army from 1940 and on through WWII. The official Italian designation was Carro Armato L6/40. This designation includes the weight and the year of adoption.

The L6/40 was a conventional light tank design of riveted construction. A one-man turret in the center mounted a single Breda Modello 35 20mm main gun and a Breda Modello 38 8mm coaxial machine gun. The driver sat in the front right of the hull. Armor was 6 to 30mm in thickness. In armor and firepower the L6/40 was a rough equivalent of contemporary light tanks.

Interestingly, the vehicle was designed by Fiat-Ansaldo as an export product, and was only adopted by the Italian Army when military officials learned of the design and expressed interest. The L6/40 was the main tank employed by the Italian forces fighting on the Eastern Front alongside the L6/40-based Semovente 47/32. L6/40’s were also used in the North Africa campaign.

A further development of the Fiat L3 light tank, the L6 went through a number of prototypes during the late 1930’s. The first was armed with a sponson-mounted 37mm main gun and a machine gun armed turret. A later version featured a turret-mounted 37mm gun and yet another version had only twin 8mm machine guns. Ultimately, the production configuration, named Carro Armato L6/40, was put into production in 1939, with 283 finally produced.

The L6Lf flame tank variant was developed in which the main gun was replaced by a flamethrower with 200 litres of fuel. A command-tank variant carried extra radio gear and had an open-topped turret. Most successful of the variants was the Semovente 47/32, which eliminated the turret and substituted a 47mm antitank gun in the open-topped hull. A final version, late in the war, was armed only with a single 8mm Breda machine gun. It was used alongside the Semovente 90/53 in order to carry extra ammunition, as the Semovente itself only carried 6 rounds of ammunition.

L6/40 light tanks were used by the Italians in the Balkans Campaign, in the war in the Soviet Union, in the latter stages of the North Africa Campaign, and in the defense of Sicily and Italy. The L6/40 was the main tank employed by the Italian forces fighting on the Eastern Front. The L6 fought alongside the L6/40-based Semovente 47/32.

Italeri is a prolific model company based in Balogna, Italy.

This new kit comes in an end-opening type box. I am not a fan of this type of model kit box. Especially, when one is not shrink-wrapped. Italeri’s kit is held shut at each end with a circular piece of Scotch tape. I have found, several times in the past, that decals will find their way past the end flaps of an end-opening type box and get lost.

The box art shows a L6/40 of the Regio Esercito – 31st Reggimento Fanteria Carrista, cooperating with German units in the Balkans, September 1943. It is in a base of Italian sand with a wave pattern of Italian olive green and Italian dark brown over it. There is white rectangles on the sides of the hull and a cartoon of a red-headed lion’s head on the front. It carries white license plates with black letters on the front. The left one says RoEto and the right one says 5488 in stenciled letters. Between these is a vertical white stripe. The lettering of both of these plates is combined on a smaller plate on the left rear. A vertical white stripe is centered there also. There is a hinged card inserted into one end of the carton. The longest part of it is inside the carton and has a full color blowup of the box art printed on it. This has a perforated edge that can be removed and then it is perfectly frameable for a hobby room wall. Nice move Italeri.

The other shorter part of this card has half of the boxart on it that drapes over the full box art of the box. It also pictures the manual included in the kit about the L6/40. The other side of the short part has four 3-views, in full color, of marking schemes provided on the decal sheet in the kit. Below this is a one paragraph history of the L6/40 in Italian and English.

One side panel continues these one paragraph histories in 6 languages, each marked with the flag of the country that speaks that language.

The other side panel has 5 color photos of various parts of the kit made up. A full side view, the rear engine deck, the inside of the hull roof and the driver’s compartment. The fifth photo is of the brass PE fret. Italeri’s address is next to these photos. The back of the box repeats the four 3-views in color. Has 5 color swatches of colors suggested to use to camouflage the kit and below that are small repeat illustrations of the boxart and the hinged card. The kit carries the copyright date of 2008 and says that the kit is not for children under 3.

Inside the box are 6 light tan trees of parts, a sheet of thin clear plastic that has 2 die-cut circles on it to use for the headlight lenses. Poor move Italeri! Injection molded clear lenses with some ridge pattern on them would have been much better. These are really sad. A fret of brass PE and the decal sheet complete parts in the kit. The tan trees are packaged 2 to a sealed cello bag. The brass PE, decal and clear lenses are in another stapled shut cello bag.

There are 13 black and white wartime photos of the L6/40 accompanied by a short history of the tank. Eight of these photos are sequential and show how a L6/40 was loaded onto a truck for transport. There are 24 black and white illustrations out of a Italian technical manual. These have numbered arrows pointing at things in the illustrations, but no names accompany the arrows. Also, ammo storage boxes are shown and other interior detail of the actual tank, that are few provided in the kit. These tantalizing illustrations will be valuable to modelers to scratchbuild some of this stuff that is missing in the kit anyway. Although the drivers’s compartment is nicely detailed, the engine compartment is empty. It has a separate hatch, but that is best left closed.

The instructions complete the kit’s contents. It consists of a single sheet that accordion folds out into 10 pages of 13” x 7 ½” format.

Page one has one paragraph histories of the L6/40 in 6 languages, including English. This is followed by ATTENTION-USEFUL ADVICE in the same languages.

Page two is the parts trees illustrations. Letter E part tree is shown with 3 parts shaded out, meaning they are excess and not needed to complete the model. Below this is an international symbol that tells us to drill holes. The bottom of the page has a listing of Italeri brand paints, suggested to use for camouflage on the model.

Page three through the top of page eight has a total of 9 assembly step illustrations. The bottom of page 8 has two 3 views, in black and white, for 2 painting and marking schemes.

The first marking scheme is the boxart. Already described above.

The second scheme is of a L6/40 of the Regio Esercito 31st Reggimento Fanteria Carrista (before the armistice), Balkans, June 1943. It is in a base of Italian sand with Italian olive green and Italian dark brown wave pattern. Similar to the boxart scheme. It carries white circles on the sides of the hull. Mickey Mouse’s face on the front and white license plates, with black lettering. The one on the left front says ReEto and the right one has the number 5219 stenciled on it. A smaller white license plate, on the left rear combines all this lettering and numbers. On the decal sheet Mickey’s eyeball centers are missing.

This third scheme is for the Regia Esercito 3rd Gruppo Corazatto “Lancieri di Novara”, North Africa, 1942. It is overall Italian sand only. It has a white eagle on the hull sides. There is a blue rectangle on the sides and rear of the turret and a white number 2 above that. There are 2 white license plates on the front of it. The left one has ReEto on it and the right one has the numbers 3958 stenciled on it. Again, a smaller white plate on the left rear combines all this.

The fourth scheme is for the Regia Esercito LXVII Battaglione Bersaglieri, Russia 1942. It is in a base of Italian sand with wide bands of Italian olive green over that. It has a blue rectangle with a diagonal white stripe across it on the sides and rear of the turret , with a black number 3 in front of that. It too has the two white license plates on the front. With the usual ReEto on the left one and the number 3844 stenciled on the right. These are combined on the white plate on the left rear.

The fifth scheme is for the German Army anti-partisan duty unit, Balkans 1944. It is in a base of Italian sand with Italian olive green and Italian dark brown lines over it. It carries the German cross on the hull sides, driver’s front plate and rear of the turret.

The bottom of page 9 has the decal application instructions in the 6 languages.

Page 10 has IMPORTANT INFORMATION CONCERNING THIS KIT in no less than 20 languages, including English. This is followed by a customer service coupon to mail in to Italeri with any problems concerning the kit. 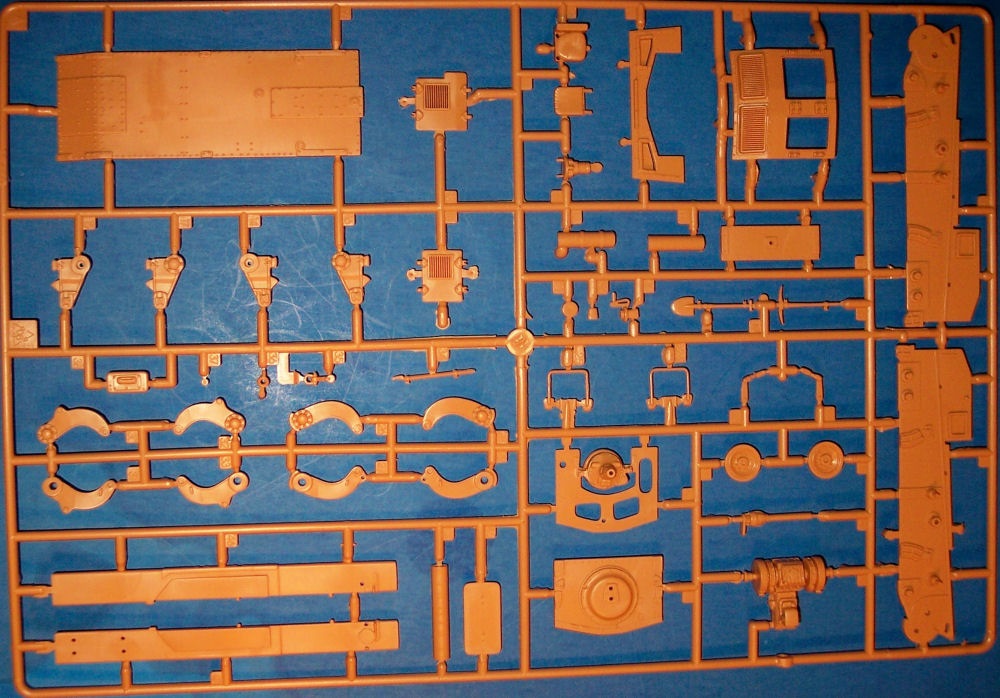 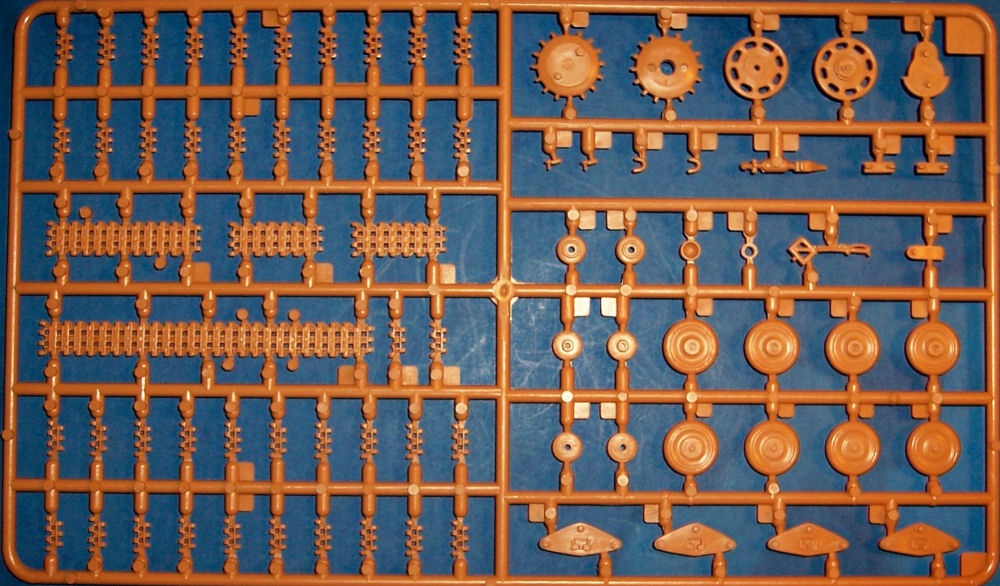 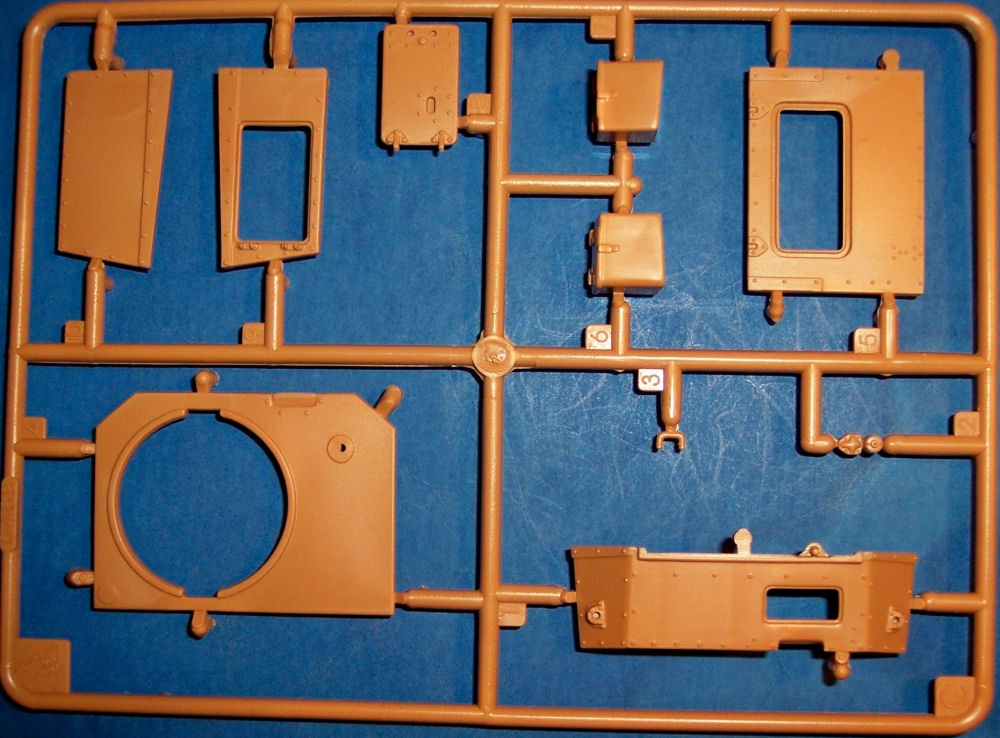 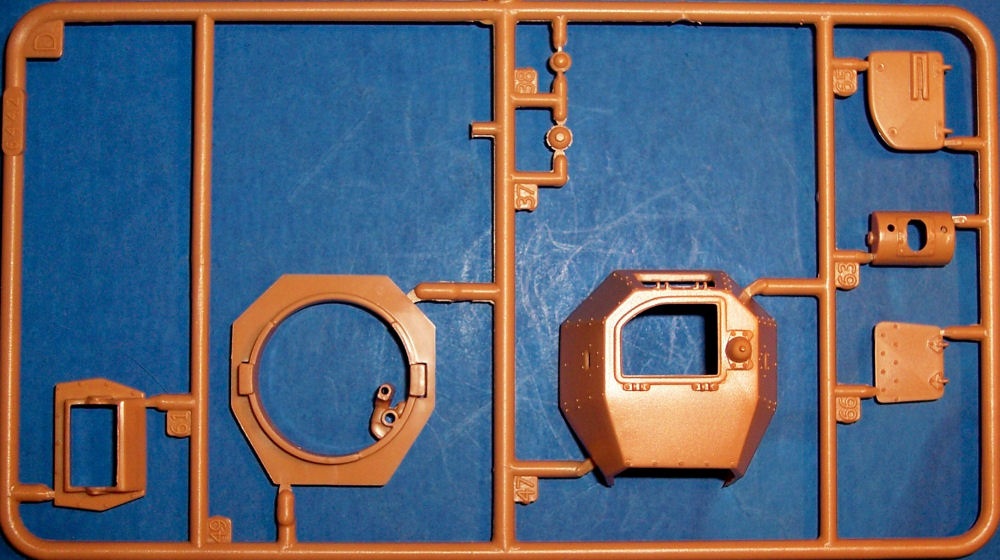 Light tan letter E parts tree holds the 20mm cannon and Breda machine gun and their mounts etc. (16 parts) As mentioned earlier 3 parts on this tree are excess and not needed. 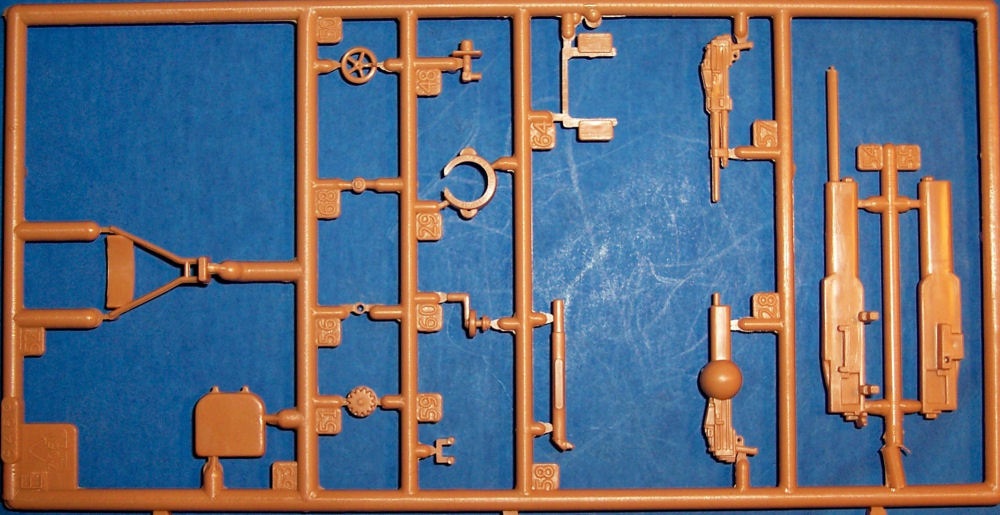 The brass PE fret is next. It holds various hatch hinges and a muffler shield (that has to be curved) etc. (13 parts) 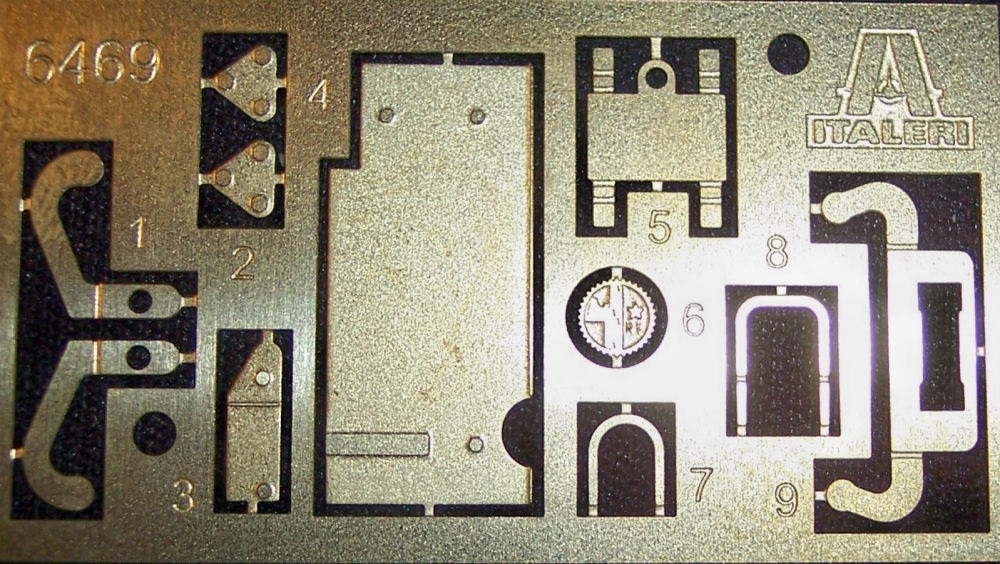 The thick sheet of clear acetate is next. It has 2 die cut circles on it for the headlight lenses. A very poor way of representing these in a kit, in my humble opinion.

The decal sheet is next. 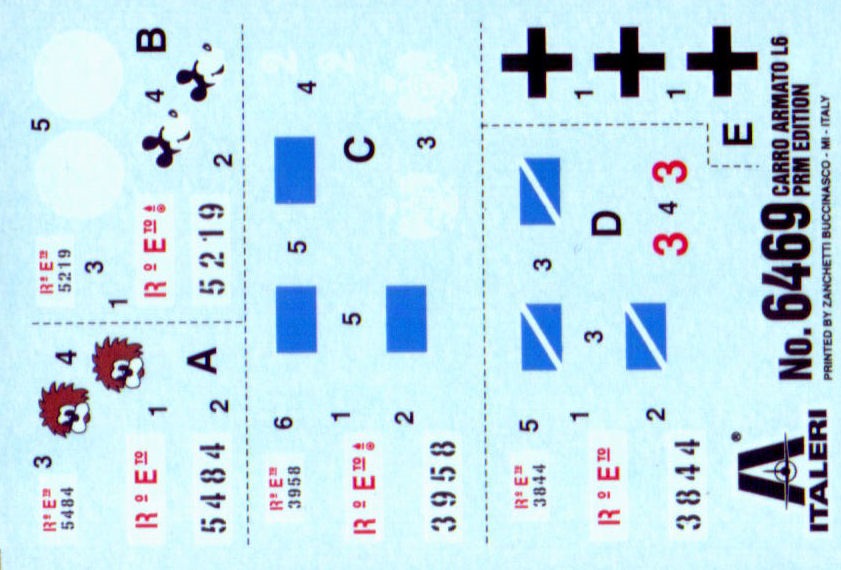 This is a very nicely detailed kit. Unfortunately, it does not include any crew figures or engine compartment detail. Only the forward section of the interior is detailed and the inside of the turret to some degree. Those of us with AMS will probably want to add more detail here. The 20mm is only lightly detailed with molded in details. I hope an after-market company releases a better one and an engine to go in this kit.

I won’t be a bit surprised to see a Semovente da 47/32 released later by Italeri, as they have a good start on one with similar parts in this kit.

Recommended to modelers with some other tank kits under their belts already.

I purchased my kit at my local hobby shopl.