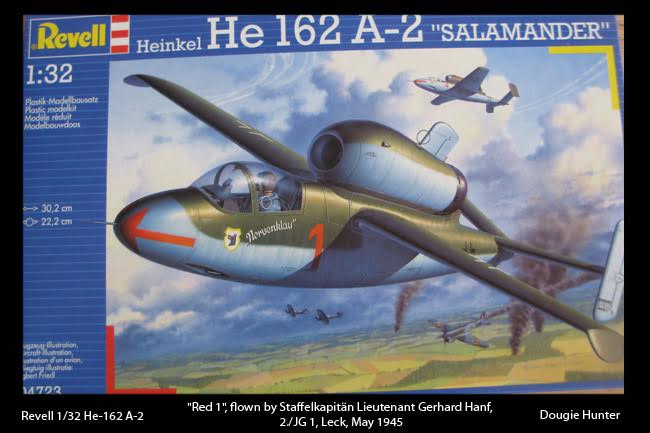 The Heinkel He-162A-2 Salamander was one of the most unusual aircraft of WWII. It originated from a requirement from the German Air Ministry for a machine that could be almost exclusively built in large numbers from non-strategic raw materials by semi-skilled workers.

It was to be powered by a BMW 003A-1 jet engine. In the unimaginary short time of only 69 days Heinkel at Wien-Schwechat had designed the new fighter, built the prototypes and made a successful maiden flight.

Although the fuselage was still built from a high percentage of aluminum components, the wings were made from a single piece of wood. A procedure that was to become the Achiles hell of the He-162 for some time, as the cold glue used was not of good enough quality.

Due to the air superiority of the Allies, it was necessary to split the production among a variety of different firms and carry out the assembly in underground assembly shops that had been specially set up. Former gypsum and salt mines were mainly used and also some underground tourist attactions  such as the Hinterbruhl Grotto , in which a subterranean lake could be crossed by boat.
Under the code-name "Languste" (lobster)

it served as a production unit for the Heinkel He-162. How, under the circumstances obtaining at the time and with such decentralization among small and tiny firms - part of the wings and horizontal tail unit was built by joiners - it was possible  to mass produce them is inconceivable today.

From February to April 1945, 116 o9f these planes were built, most of which were delivered to 1 "Oesau" Fighter Wing in order to equip their 1st and 8th Squadrons. Notorious fuel shortages in the final days of the war prevented the more extensive use of the He-162. The last mission flown by a He-162 was on the 4th of May, 1945 and it ended shooting down a Hawker Typhoon.

Revell is an old proflific model company. They make all manner of model subjects in the popular scales. They have facilities in the U.S. and Germany.

The kit came in a end-opening type box held shut with round pieces of scotch-tape. I am no fan of this type of box, because invariably parts or the decal sheet find their way past one of the end flaps to become lost forever. Give me a tray and lid type box any day of the week.

The box art shows 2 Salamanders dog-fighting with 3 British Hawker Tempest fighters. One of which is going down in flames.

Both Salamanders are dark-green over light-blue undercarraiges. The one in the foreground has light-blue underneath the dorsal jet engine and the rudders. It has a red arrow n the nose, a white shield with a black dog's head on it, followed by a white "Nervenblau" under the cockpit and a yellow number 1. It has a black serial number 120077 low on the fudder sides.

The other Salamander also has a red arrow on the nose with the same white shield and a red number 4 on the fuselage sides.

The Tempest on fire is in a wave pattern of dark-green and gray with a fuselage code in white of ZD roundel N. The other 2 Tempests  are too far away to make out marks.

One side panel begins with a history of the aircraft, suggested Revell brand paints in 3 languages, including English, followed by details of the kit:

The other side panel has the history of the Salamander in 4 languages, including English. The copyright date 2004. Revell of Germany's address. Paint and cement not included. 1/32nd scale. Length made up 30.2 cm. Width 22.2 cm. Pictorial multilingual instruction sheet provides precise assembly. Kit is suitable for modelers 10 to adult.

This kit contains 4 pale-gray trees and a clear tree in a large blousey sealed clear cello bag. The decal sheet and instructions.

The decal sheet has a frosted sheet to protect it's face from scratching.
There is a 8 1/4" x 11 3/4" sheet printed on both sides with WARNINGS and Safety Rules IN 21 languages, including English.

Page 1 of the instructions begins with a black and white photo of the model made up in the box art scheme, above the history of the aircraft in German and English.

Page 2 begins with READ BEFORE YOU BEGIN instructions in 18 languages, including English, over 5 illustrations of model tools suggested to use.

Page 3 begins with international assembly symbol explanations a German address and a guarantee in multiple languages, including English.

Page 4 has a paint listing in the 18 languages.

Page 6 through 11 gives a balance of a total of 42 assembly steps.

Pages 12 to 14 gives steps number 43 to 45. Which are painting and marking instructions as 4-views.

The first Salamander in step 43 is overall dark-green with a red engine intake and black exhuast over a light-blue undercarraige and a yello 3 outlined in black on the fuselage sides. It has a blue shield with a red lion holding a yellow 3 under the cockpit and a white serial number 120072 low on the rudder sides.

The second Salamander in step 44 is in the same scheme, but with light-blue rudders, a red arrow on the nose and a white sheild with a black dog's head on it under the cockpit and a yellow 1 on the fuselage sides. It has the black serial no. 120077 low on the rudder sides.

The thrid Salamander in step 45 is in the dame scheme as the other 2, but with a white nose. It has a yellow 3 outlined in black on the fuselage sides and a blue shield with a red devil above white clouds on it under the cockpit.

The parts trees are not alphabetized, but they are illustrated in the instructions and do have part number tabs next to the parts on them. 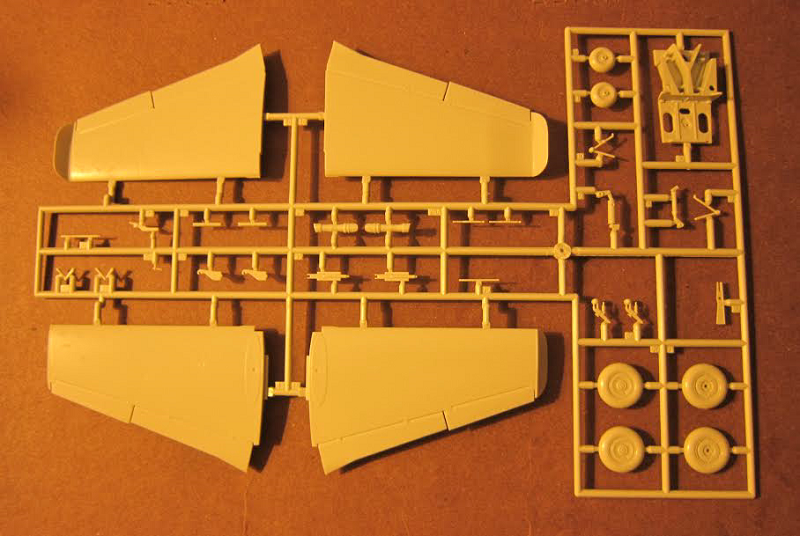 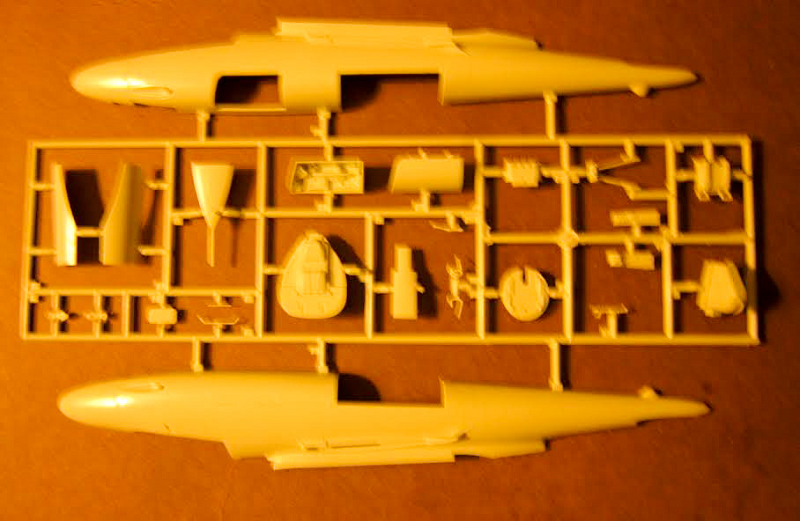 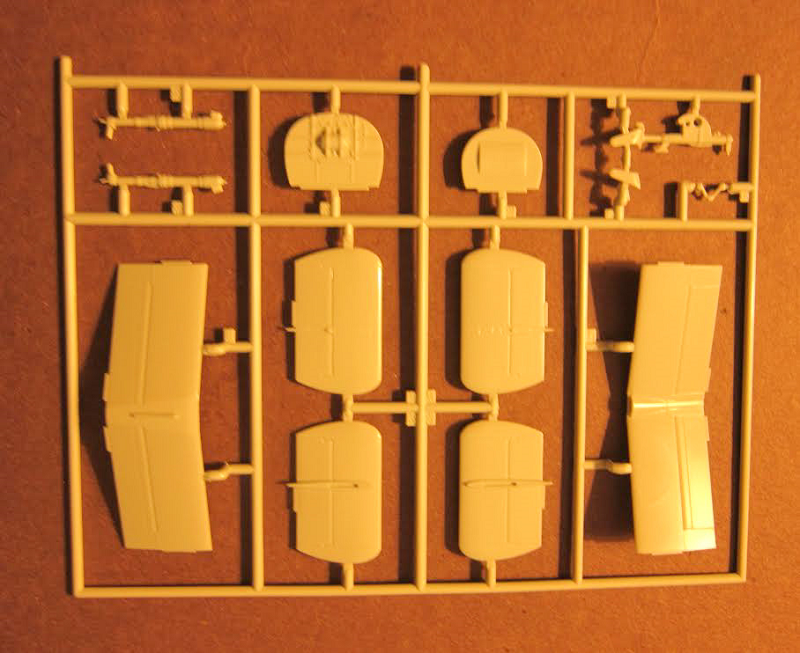 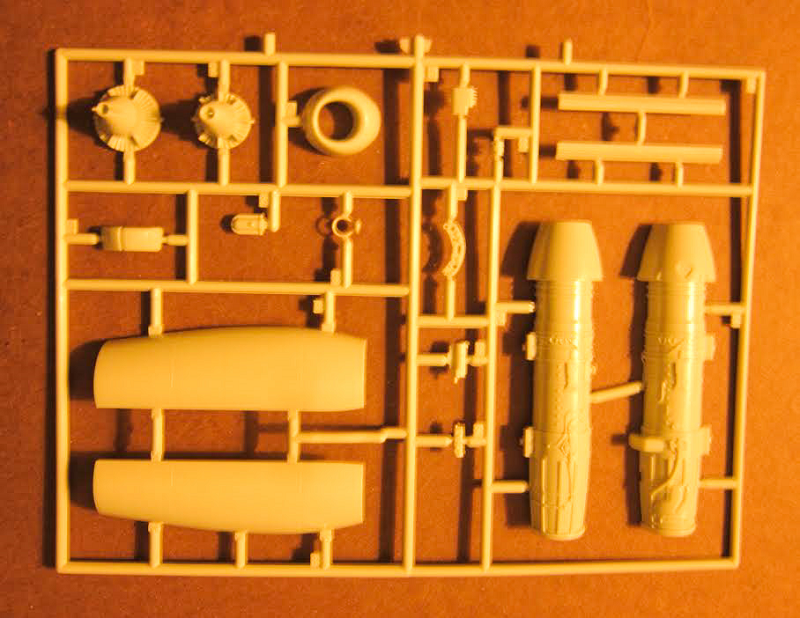 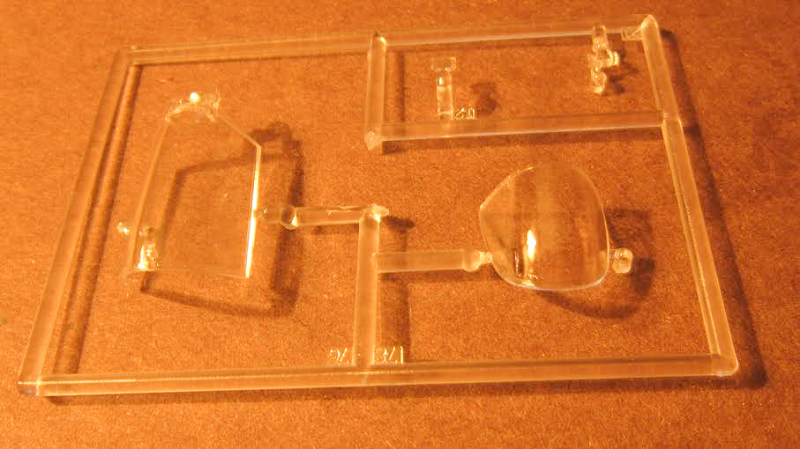 The kit decals for the versions above.

There is no pilot figure included or swastikas on the decal sheet.