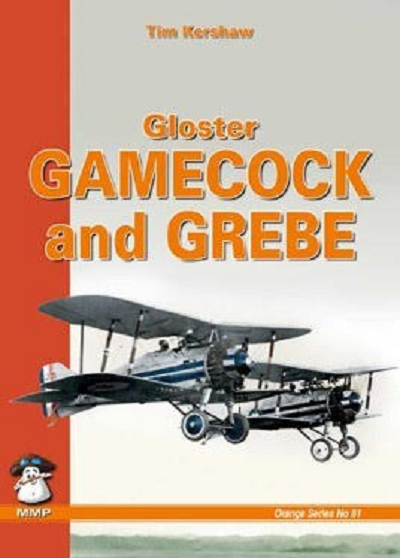 The Gloster Grebe and Gamecock are two classic British “between the wars” fighter biplanes. Designer Henry Folland developed these aircraft from the World War One SE.5A, via various British “Nieuport” designs.

The Grebe was the first new fighter for the RAF after WWI, and the Gamecock was the last wire-braced wooden fighter in the RAF. Wearing the bright squadron colors of the era, these agile and aerobatic types thrilled crowds at the annual Hendon displays.

In addition to these two operational machines, a variety of closely related test and development aircraft were produced over the same period. These used different engines, tested variable-pitch propellers and other technical innovations.

Mushroom Model Publications (MMP) is based in the UK. All their books are printed by their associate Stratus in the English language in Sandomierz, Poland. Stratus also does their own line of books in both Polish and English.

The cover art shows 2 Grebes from No. 25 Squadron in flight.

The Gorcock, Goldfinch, Guan and Gambet are described here. The Nakajima A1N fighter for the Japanese Navy was also part of this family, and the final version of the Gamecock saw service with Finland, the last one surviving until 1944.

All these aircraft are described and illustrated, with scale plans, phots (including many rare ones), and color profiles.

Author Tim Kershaw is a leading light in the Gloucestershire Aviation Collection’s Jet Age Museum, which holds the Gloster archives and whose members have built a “new” Gamecock from surviving parts and official plans,

Detail photos of this splendid reproduction aircraft fill a section of the book. Short biographies of Henry Folland and the key Gloster test pilots of the period round out the text.

There are 44 color side profiles and 9 top views.

Twenty-one of these are of the Grebe and seven are of the Gamecock in Finnish markings. Three other pilots are photographed and the aircraft’s engines. There are 32 color profiles of the Goldfinch and 7 of the A1N-1 Nakajima.

This is one neat book. It will be of great interest to modelers and aircraft historians alike. Highly recommended.

I want to thank Roger Wallsgrove, the head editor of MMP and the folks at Stratus for this review sample

This kit can be found on the Casemate site for sale at:
www.casematepublishers.com