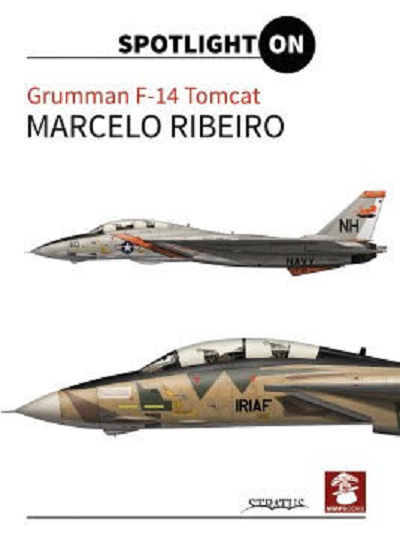 The Grumman F-14 Tomcat is an American supersonic, twin-engine, two-seat, twin-tail, variable-sweep wing fighter aircraft. The Tomcat was developed for the United States Navy's Naval Fighter Experimental (VFX) program after the collapse of the F-111B project.

The F-14 was the first of the American teen-series fighters, which were designed incorporating air combat experience against MiG fighters during the Vietnam War.

The F-14 first flew in December 1970 and made its first deployment in 1974 with the U.S. Navy aboard USS Enterprise (CVN-65), replacing the McDonnell Douglas F-4 Phantom II.

In the 1980's, F-14's were used as land-based interceptors by the Islamic Republic of Iran Air Force during the Iran–Iraq War, where they saw combat against Iraqi warplanes. Iranian F-14's reportedly shot down at least 160 Iraqi aircraft during the war, while only 12 to 16 Tomcats were lost; at least half of these losses were due to accidents.

The Tomcat was retired from the U.S. Navy's active fleet on 22 September 2006, having been supplanted by the Boeing F/A-18E/F Super Hornet.
The F-14 remains in service with the Iranian Air Force, having been exported to Iran in 1976. F-14s operated by the IRIAF have recently seen use against ISIL in the Middle East, and have been recorded escorting and accompanying Russian Air Force Tu-95 and Tu-160 strategic bombers on missions over Syria.

Mushroom Model Publications is based in the UK. All their books are printed in Sandomierz, Poland by their associate Stratus Publications. Stratus does their own line of books too in both the English and Polish language. This book is in English.

The cover art shows 2 Tomcat's posed against an all white background.

This aircraft is painted in gloss light gull grey (FS 16440) over white with bright orange fin tip and fin.

A side-view of this aircraft is repeated on page 21 of the book.

This aircraft is shown again on page 33.

There is a color photo of a F-14D Tomcat - BuN 164346, preserved at Virginia Aviation Museum, Richmond, Virginia, USA displayed outdoors.

There are a total of 38 color side profiles of U.S. and Iranian F-14's and top and bottom views of F-14A's from the "Starfighters" and "Sundowners".

The author: Marcelo Ribeiro is a 41 year old Brazilian journalist specialized in digital and content marketing. He started drawing aircraft profiles as a hobby back in 2003 and, since then, has never stopped.

Today this is his secondary "Job", conducted in his spare time. He has contributed to important Brazilian history and military aviation magazines since 2006, as well as scale model publications, and as a main illustrator for books, specialized websites and military units, some of them outside Brazil.

His technique is a mix of vectored lines and photo edit rendering. The main characteristics of Marcelo's work are the weathering process, and checking against photos of real planes for total accuracy. For him, an aircraft profile is made just like a scale model.

First of all he draws the lines, then goes through the painting process. addition of markings, then highlights and shadows before the weathering. The primary goal is to achieve an accurate look for the aircraft profile, not just showing colors and markings, but especially the environment where the aircraft was operated.

According to Marcelo, his favorite subjects are Cold War aircraft, from the Vietnam War to Desert Storm. He is also very interested in U.S. Navy aircraft, and chose a really iconic example to showcase his work in Spotlight On series: The F-14 Tomcat.

This is neat book. It will be of great interest to aircraft historians and modelers alike.

I wish to thank Dr. Roger Wallsgrove, Editor-in-chief of Mushroom Model Publications (MMP) and the folks at Casemate Publishing who sent me this review sample.

Casemate is the North American distributor of MMP books. All MMP titles can be seen on their web site at:
www.casematepublishing.com