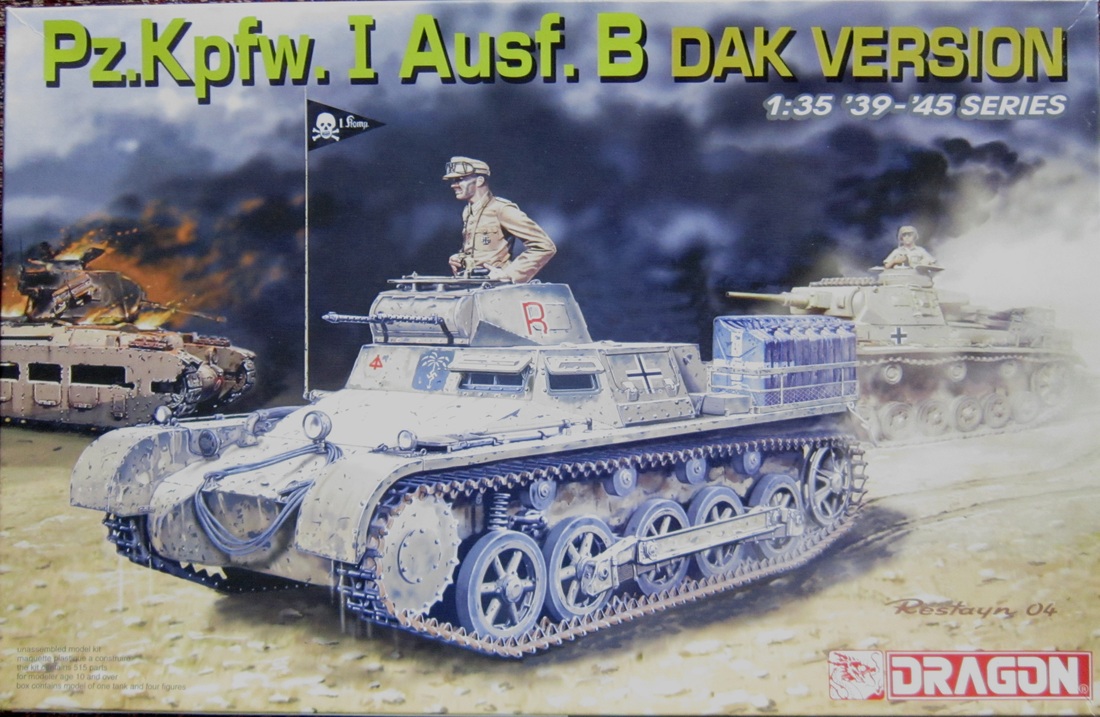 Pz.Kpfw. I Ausf. B, DAK Version

The Panzer I was a light tank produced in Germany in the 1930s. The name is short for the German Panzerkampfwagen I ("armored fighting vehicle mark I"), abbreviated PzKpfw I. The tank's official German ordnance inventory designation was Sd.Kfz. 101 ("special purpose vehicle 101").

The Panzer I's performance in combat was limited by its thin armor and light armament of two machine guns. As a design intended for training, the Panzer I was not as capable as other light tanks of the era, such as the Soviet T-26. Although weak in combat, it formed a large part of Germany's tank forces and was used in all major campaigns between September 1939 and December 1941. The small, vulnerable light tank would be surpassed in importance by better-known German tanks such as the Panzer IV, Panther, and Tiger; nevertheless, the Panzer I's contribution to the early victories of Nazi Germany during the Second World War was significant.

DML Dragon is a prolific model company based in Hong Kong China. They market all manner of model subjects in all the popular scales.

This kit comes in a shrink-wrapped tray and lid type box. The box art shows a Pz.Kpfw. I Ausf. B leading a Pz.Kpfw. IV across the sand. There is a burning British Matilda tank behind them. The Pz.Kpfw. I is in overall earth yellow that is heavily stone dinged showing it’s panzer gray undercoat. It has an un-painted patch of panzer gray on the front of the fighting compartment with a white palm tree and swastika insignia on it. To the left of that is a red 15th Panzer Division insignia. There is a red letter R outlined in white on the turret sides and a thin German cross is on the sides of the hull. The tank commander is standing in the turret hatch. There is a black pennant on the end of the radio antenna that has a white skull and cross-bones on it with the word “1 Komp”.

One side panel shows color illustrations of the decal sheet, the jerry cans and milk containers and the 2 PE sets. It says the kit is not for children under 3 in multiple languages including English. It tells when using paint or glue to keep them away from an open flame and be in a well ventilated room The kit is intended for modelers age 10 and older. Dragon’s Hong Kong street address and their web address are provided and the kit was made in China.

The other side-panel has 4 color illustrations telling the kits features: hatches with open or closed option, PE parts for the jerry can storage rack, PE parts for the engine grill/exhaust upgrade, 4 bonus crew figures. Paint and glue are not included.

Inside the box are 16 gray parts trees, 2 clear trees, 2 brass PE frets and the decal sheet in 9 sealed cello bags. The instructions complete the kits contents.

The instructions consist of a single sheet that accordion folds out into 8 pages in 8 ½” x 12” page format.

Page 1 of the instructions begins with a black and white repeat of the box art, followed by the parts trees illustrations. Some of the parts are shown here BLUED-0UT. That means that they are excess and not needed to complete the model.

Page 2 begins with “CAUTIONS” in 6 languages including English, followed by international assembly symbol explanations and a paint color list. The bottom of the page has the first 2 assembly steps.

Page 3 through 7 give a grand total of 14 assembly steps. The 14 step is for the assembly and painting of the crew figures.

Page 8 has two 4-views of painting and marking schemes:

1.     A tank with the 21st Pz.Div. Africa 1941. It is in overall sandy brown 79. It has narrow German crosses on the hull sides and the rear of the turret. A white palm tree and swastika is next to the 21st’s Division mark on the front of the crew compartment  and on the nose of the hull.

2.     A tank with the 5th Pz.Div., Tripoli 1941. It is in overall panzer gray with a red “R01” outlined in white on the turret sides. It has thin German crosses on the turret rear and hull sides.

On either scheme we are told we can use any one of the alternate German crosses provided on the decal sheet.

Below this is Dragon’s office address at their Braz, Austria site. The copyright date is 2004. The bottom of the page has the decal application instructions in the 6 languages. 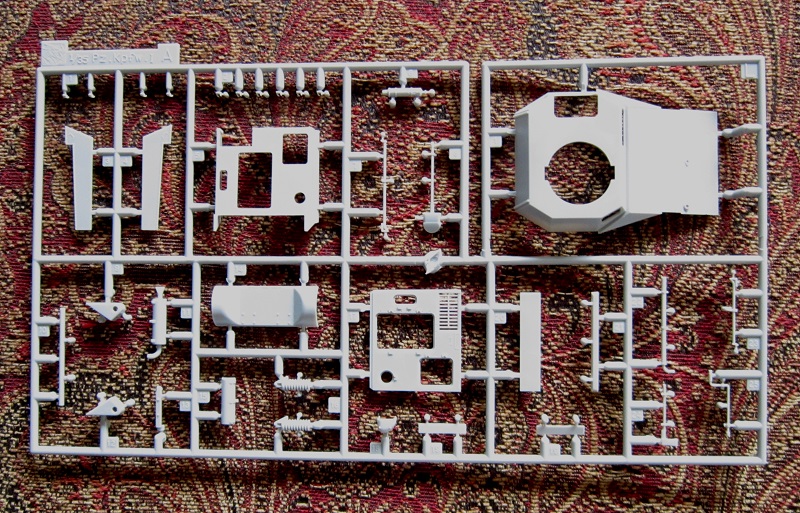 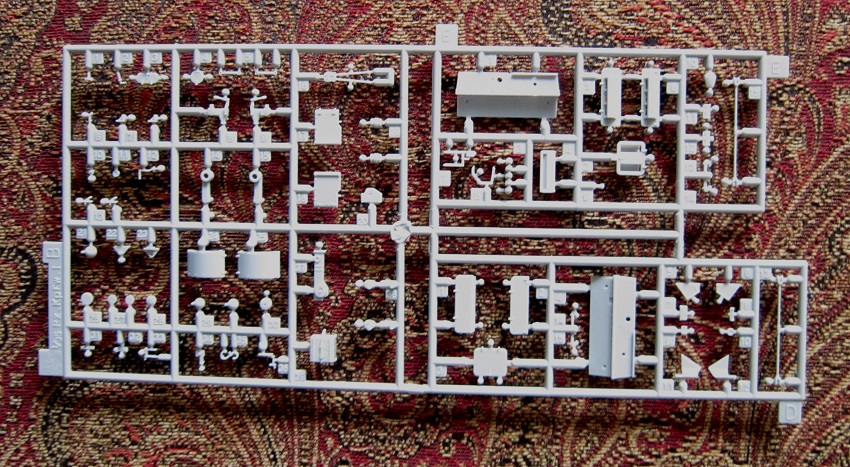 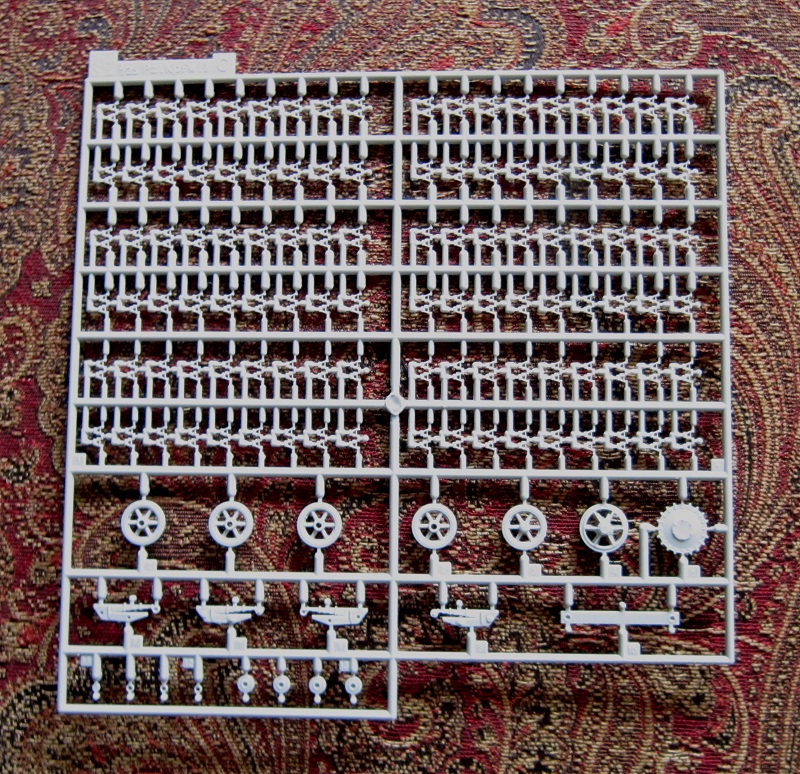 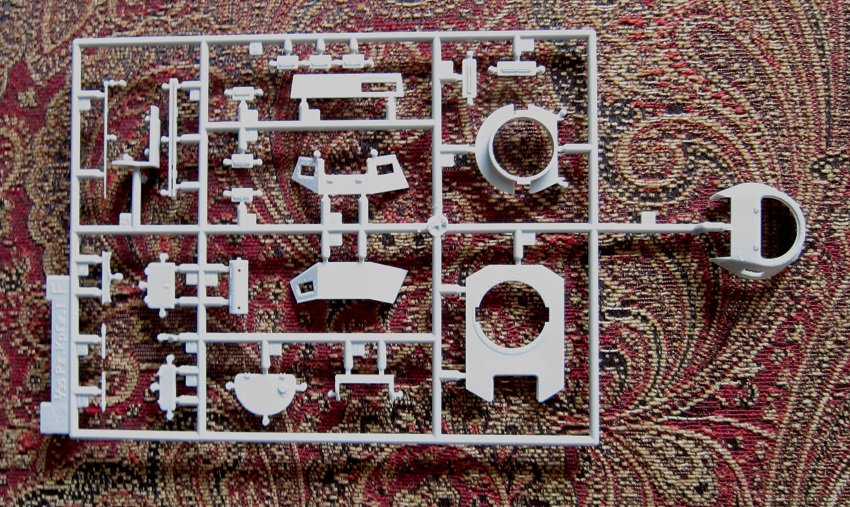 Letter MB tree is the second of the two brass PE frets. It holds the jerry can rack and jerry can center sections (7 parts) 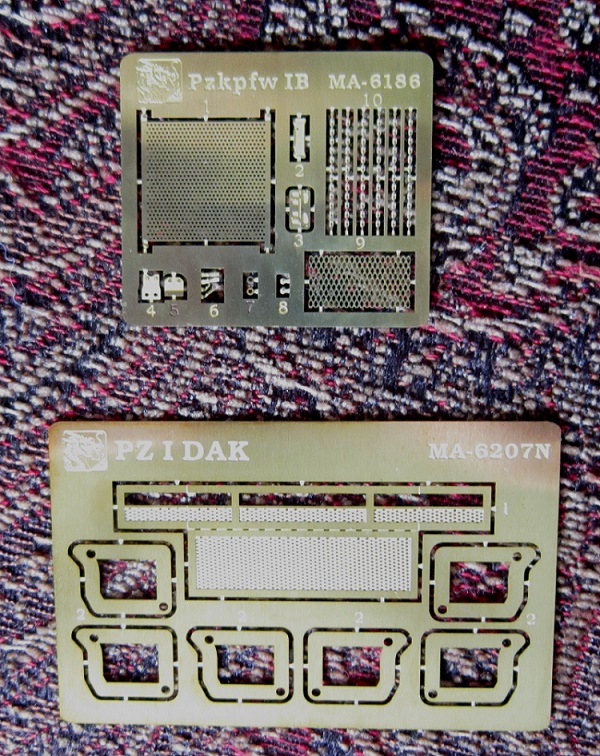 There are two identical gray letter N parts trees. They hold the Jerry can parts. (12 parts per tree) 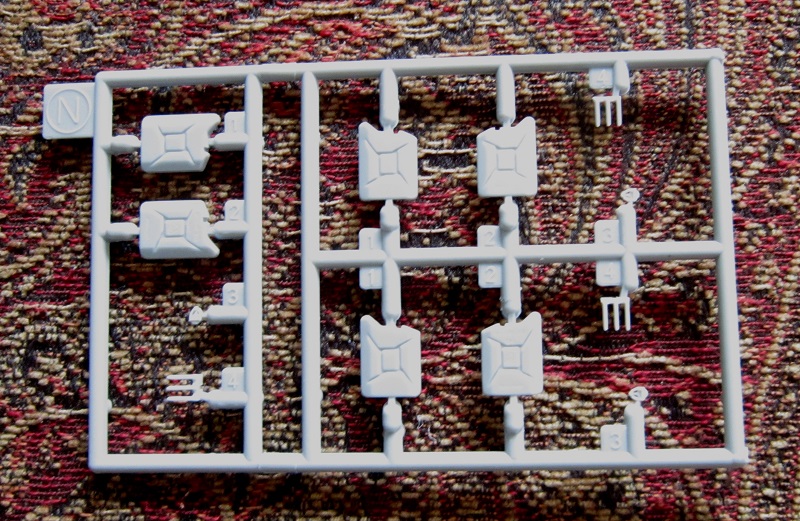 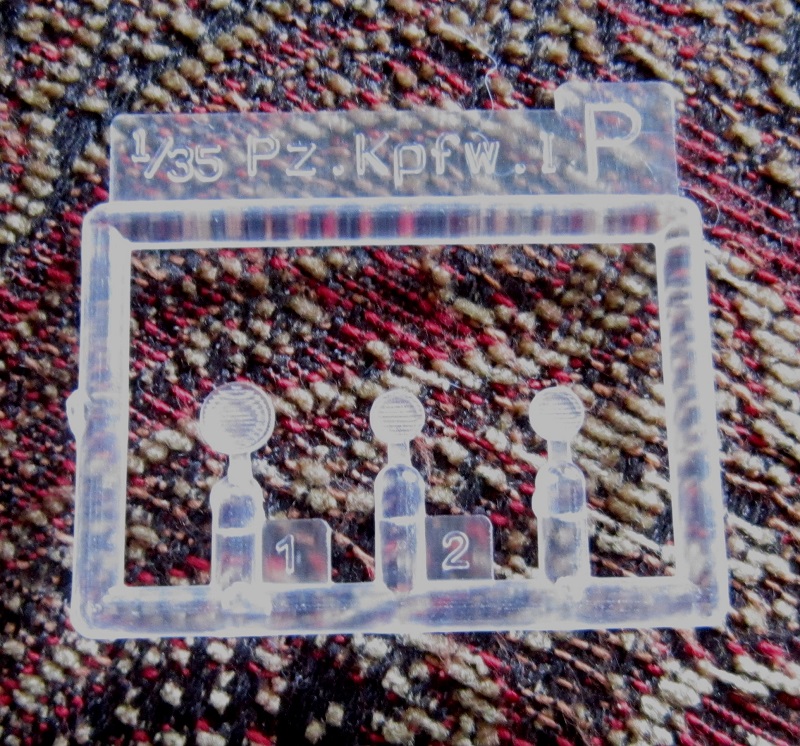 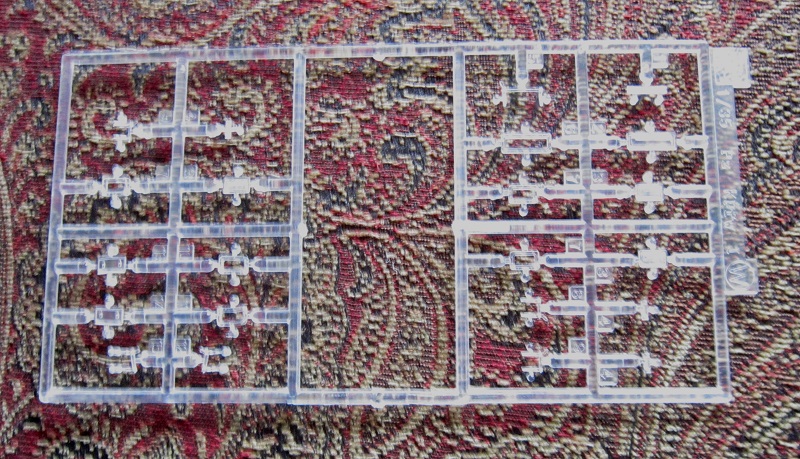 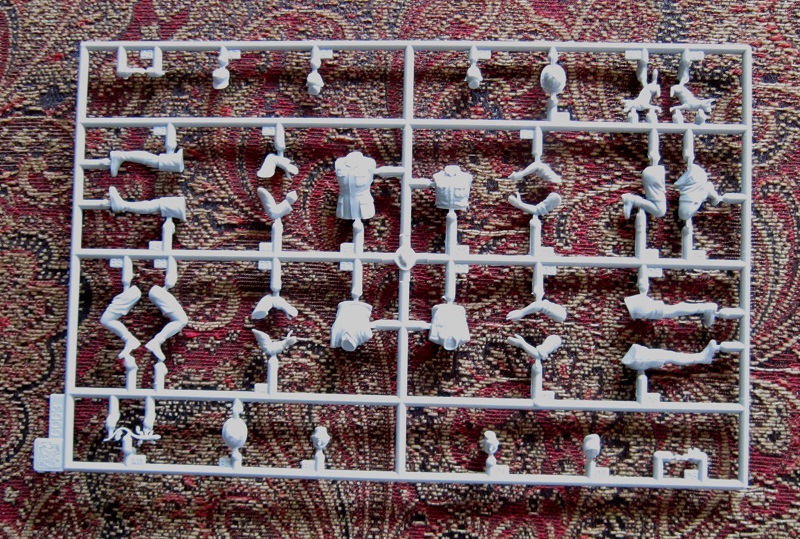 These last 2 trees are co-joined. 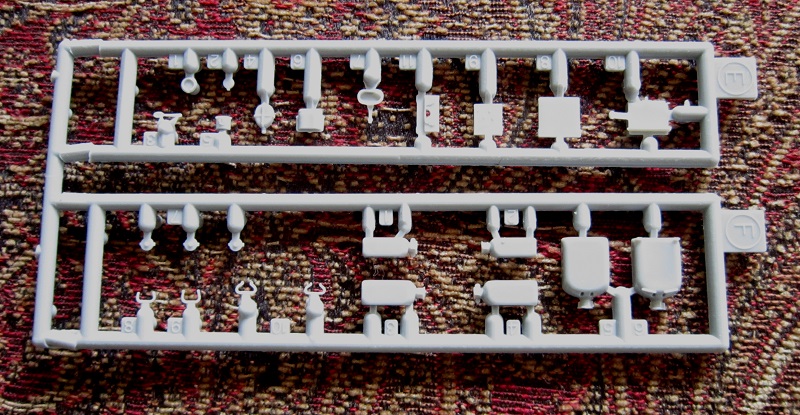 Trees letter P, the 2 brass PE frets and the decal sheet are all attached to a card that has a tread pattern printed on it and in a large cello.

I bought the Archer brand dry transfer decal set no. AR35026W. It is variants of the DAK’s palm tree and swastika insignia all in white.

The turret hatch is a separate part and can be posed open. However, there is absolutely no interior details provided for inside the hull or the turret.

I have always liked DAK subjects in AFV’s and figures. So, I jumped at the chance to buy this kit at my local hobby shop.

I recommend it to modelers that have average building skills.