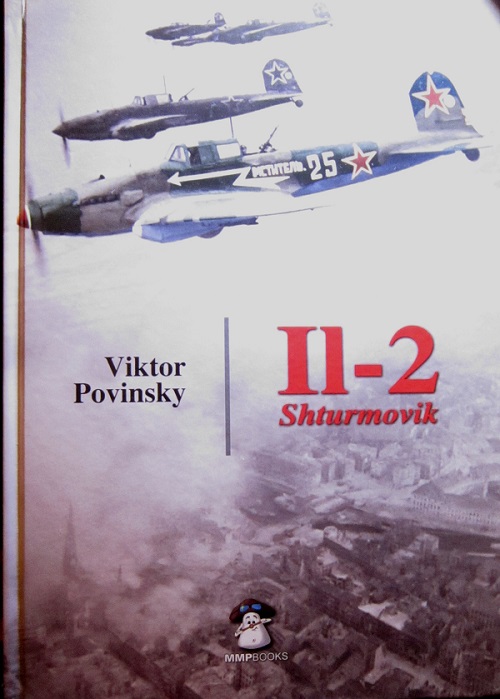 Mushroom Model Publications  (MMP) is located in the U.K. All their books are printed in English in Sandomierz, Poland by their associate Stratus. Stratus also prints their own books in Polish.

It is an illustrated technical history of the most famous Soviet warplane of WWII, the IL-2 Shturmovik. Built in large numbers than any other aircraft, the IL-2 ground-attack and close-support aircraft was perhaps the most important aircraft on the Eastern Front in WWII. The different versions of the plane, from the prototypes to the final aircraft of 1945 are described and illustrated. All the changes in specification, equipment and performance are recorded. Drawings and data from the original technical manuals, full dimensional details and photographs of surviving examples preserved in aviation museums illustrate all aspects of the airframe, inside and out.

There is a black and white photo of the machine gun and it’s sight used on the single seat version.

This is followed by 1/72nd scale profile plans of the IL-2 single seat version. Three 5-views. Two 4-views and a single 2-view. There are also four profile plans of variants of the cockpit canopy.

Also included are 4 black and white illustrations of cockpit interiors for single seat types and 2 of the joysticks. Included is a black and white photo of the machine gun and gun sight.

Finally, there is a plan drawing of the rear gunner’s section.

There is eight 2-views in 1/48th scale of the single seat version and one 4-view.

For the 2 seat versions there is a total of 69 black and white wartime photos.

Four illustrations of the machine guns on the 2 seater are provided.

Next is 1/72nd scale profile plan drawings of the anti-ship variants of the 2 seaters. A line drawing shows bombs and a bomb rack used.

5 information charts about the 2 seater are given.

There are 8 full color paintings of the single seat version, one top view, eight 3-views and four 2-views.

There are 21 full color painting of the two seat versions. Twelve 3-views and four 2-views.

There are 23 illustrations out of tech manuals.

There is a bibliography at the back of the book.

On the back cover is an illustration of the cover art of another book by MMP. It is titled “Vanator Romanian Hunter, the I.A.R. 80 and I.A.R. 81 in Ultimate Detail” by
Radu Brinzan.

This has got to be the definative book on this aircraft. Highly recommended to WWII aircraft enthusiasts and modelers.

I want to sincerely thank Casemate who sent me this review copy and Roger Walsgrove Editor-in-Chief of MMP.

For information on all MMP books go to:

The U.S. distributor is Casemate Publications