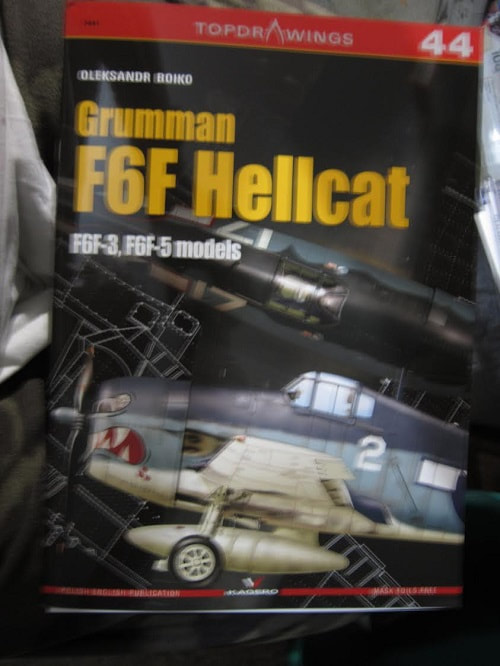 The Grumman F6F Hellcat was constructed in the early 1940's at Grumman Aircraft Engineering Corp. in Bethpage. Unlike its predicessor, the Grumman F4F Wildcat, the Hellcat received a low gear with widely spaced wheels on the main chassis.

Significantly, increased both wings and fuselage to accomodate the required fuel and ammunition supply and to provide adequate  structural strength.

Fixed weapons consisted of six 12.7 mm machine guns. A contract for the construction of two prototypes of the new BuAer fighter was made with Grumman on June 30, 1941.

During the entire production period only minor changes were made to the construction of the Hellcat. One of the most important  modifications was the used from the aircraft No. 1,900 F6F-3 of the R-2800-10W engine equipped with a water-injection system with methanol.

Starting with the No. 3,451, the F6F-3 order was capable of mounting six 127 mm (5 inches) unguided missile launchers. Between the Nos. 1,500 and 2,000, the F6F-5 had the side windows behind the pilot's cockpit were abandoned, and this was the most visible exterior change to distinquish the late F6F-5 from the early production machines.

In addition to the standard daytime fighter versions, the F6F-3E, F6F-3N, F6F-5E and the F6F-5N night fighters were also built. Some of the F6F-5N machines were armed with two 20 mm calibre cannons and four 12.7 mm  machine guns, instead of the standard six 0.5 in calibre machine guns.

A number of aircraft of both versions were adapted to be fitted with a camera in the fuselage. Such modified reconnaissance Hellcats were designated F6F-3P and F6F-5P.

Kagero is book publisher based in Lublin, Poland. They produce their books in both Polish and English. This book has both languages in it.

This book is a set of drawings and color profiles of the F6F-3 and the F6F-5 Hellcat versions.

The cover shows a hellcat that has a dark blue spine, over medium grey sides and a white bottom. It has a angy face on the cowl who's mouth is dripping blood. It carry a white 2 fuselage number before the star with bars national insignia.

There is illustration of another Hellcat behind it showing an above view. It carries the white fuselage no. 17.

Behind both of these is a white line drawing showing the wing of a Hellcat.

One corner of the cover art says that there are free mask foils included in the book. This means die cut canopy masks for either a 1/72nd or a 1/48th scale Hellcat model. Neat!!

Half of the text in the book is in English and the other half is in Polish.

There is a loose sheet in the book that is twice the width of the regular pages and printed on both sides.

Four illustrations of the interior and canopy windows in 1/24th scale.

The last page in the book has the cover arts of 22 other aircraft books in the scale drawings series by Kagero:

Final item in the book is the sheet of die cut, self-adhesing cockpit masking stickers.

I wish to thank Casemate Publishers, the North American distributor of Kagero books and the folks at Kagero for this review sample.
A full listing of Kagero titles can be seen at:
www.casematepublishers.com