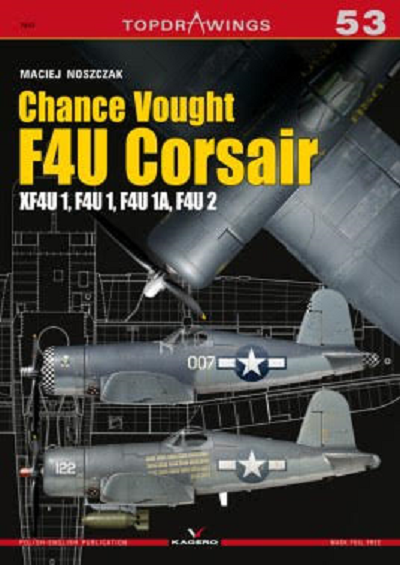 MSRP: $24.95
​In February 1938, the United States Navy opened a competition for a new fighter. It's maximum speed and operational ceiling were to exceed all the machines that the American aviation had at this time.

Among others, the Chance Vought company entered the competition. The Corsair was designed by a team of engineers led by Rex Beisel, the company's chief constructor.

The prototype XF4U-1 was flown on May 29, 1940. The Corsair was powered  by an eighteen-cylinder Pratt & Whitney R-2800 Double Wasp engine. That was the largest and the most powerful radial engine ever installed in a single-seat front fighter.

The book is soft-bound and in English and Polish laguages. It comes in a re-sealable clear envelope.

The cover art shows 2 side views:

It too is navy-blue over a gray undercarraige. It has a white stenciled 122 on the nose, 100 yellow bombing mission marks under the cockpit.

It too is navy-blue over a gray undercarraige with a white circle with a yellow rabbit on it on the nose and "Bayou Baby" in yellow on the fuselage sides in front of the cockpit a stenciled yellow 850 fuselage code.

All three of the above illustrations are repeated in the book. 850 is a 4-view in the book.

For black and white line drawings there are 13 of them:

There are 6 color illustrations, counting the front and back covers.

As a bonus inserted into the book is a black sheet that has stencil cut canopy masks to use on either a 1/72nd scale or 1/48th scale model kit of the Corsair. Neat!

Highly recommended to both aircraft historians or plastic modelers alike.

I want to thank Casemate Publishing, the N.American distributor of Kagero books and the folks at Kagero for this review sample.

A complete listing of Kagero titles can be viewed on Casemate's web site at:
www.casematepublisers.com