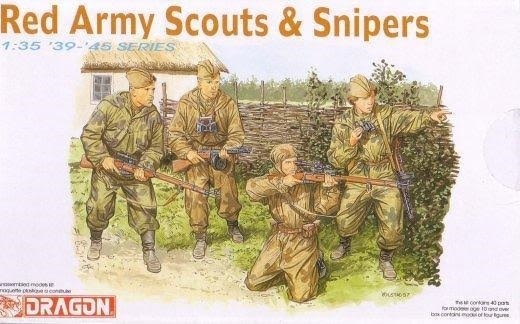 A sniper is a marksman or qualified specialist who operates alone, in a pair, or with a sniper team to maintain close visual contact with the enemy and shoot enemies from concealed positions or distances exceeding the detection capabilities of enemy personnel. Snipers typically have highly-selective or specialized training and use crew-served high-precision/special application rifles and optics, and often have sophisticated communication assets to feed valuable combat information back to their units or military bases.

Most sniper teams operate independently, with little combat asset support from their parent units; their job is to deliver discriminatory, highly-accurate rifle fire against enemy targets that cannot be engaged successfully by the regular rifleman because of range, size, location, fleeting nature, or visibility. Sniping requires the development of basic infantry skills to a high degree of skill. A sniper's training incorporates a wide variety of subjects designed to increase value as a force multiplier and to ensure battlefield survival. The art of sniping requires learning and repetitively practicing these skills until mastered. A sniper must be highly trained in long range rifle marksmanship and field craft skills to ensure maximum effective engagements with minimum risk.

In addition to marksmanship and long range shooting, military snipers are trained in a variety of techniques: detection, stalking, and target range estimation methods, camouflage, field craft, infiltration, special reconnaissance and observation, surveillance and target acquisition.
During the interbellum, most nations dropped their specialized sniper units, notably the Germans. Effectiveness and dangers of snipers once again came to the fore during the Spanish Civil War. The only nation that had specially trained sniper units during the 1930s was the Soviet Union.

Soviet snipers were trained in their skills as marksmen, in using the terrain to hide themselves from the enemy and the ability to work alongside regular forces. This made the Soviet sniper training focus more on "normal" combat situations than those of other nations.

Liudmyla Mykhailivna Pavlychenko ( July 12, 1916 – October 10, 1974) was a Red Army Ukrainian Soviet sniper during World War II. Credited with 309 kills, she is regarded as one of the top military snipers of all time and the most successful female sniper in history. 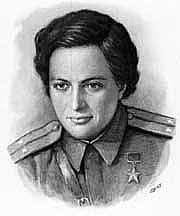 ​Scouts,In military operations,  have the job of reconnaissance That is the exploration outside an area occupied by friendly forces to gain information about natural features and enemy presence.
Espionage normally is not reconnaissance, because reconnaissance is a military's special forces operating ahead of its main forces; spies are non-combatants operating behind enemy lines.
Often called "recce" (British and Canadian English) or "recon" (American and Australian English).
​THE KIT:

This kit came in a shrink-wrapped end-opening type box. I am no fan of this type of box, because invariably parts or the decal sheet find their way past one of the end flaps to become lost forever. Give me a tray and lid type box any day of  the week.

The box art shows 4 Red Army Scouts or Snipers behind a fence that is woven together with sticks. There is a white house with a thatched roof in the background.

All the figures are wearing camouflaged uniforms that are tan with dark green flower-shaped spots on them. All wear black jack boots with their pants tucked in the tops.

Three wear tan cloth side-caps. The fourth figure (which I think looks female) has her hood pulled up over her head.

Three figures are standing and the third figure is kneeling.

One of the standing figures is definately female due to her long hair showing. She is holding a pair of binoculars in her right hand and is pointing with her left arm. She has a PPSH 41 sub-machine gun slung over her left shoulder.

The kneeling female figure is aiming a Mosin-Nagant rifle with a scope on it.

One side panel of the box has 2 color box arts of other DML Dragon figure kits: kit no. 6063, a Duetsche Afrika Korps group of figures and kit no. 6065, German Cossack Cavalry figures on horses.

​This is followed by "Not suitable for children under 3 due to small parts." in multiple languages, including English. It is mentioned also here that Italeri is the European importer for DML and supplies Italeri's address in Italy.

The other side panel of the box says that the kit contains parts for 4 figures and that paint and glue are not included, in 6 languages, including English. These are labeled with color illustrations of the flags of those countries that speak those languages.

The copyright date of the kit is listed as being 1997 and DML'S address in Hong Kong, China is provided. The kit was made in China.

The bottom of the box serves as the assembly and painting instructions. There is a 2-view illustration of each of the 4 figures, along with 3 black and white illustrations of camouflage clothing and 2 color swatches of camouflage patterns. 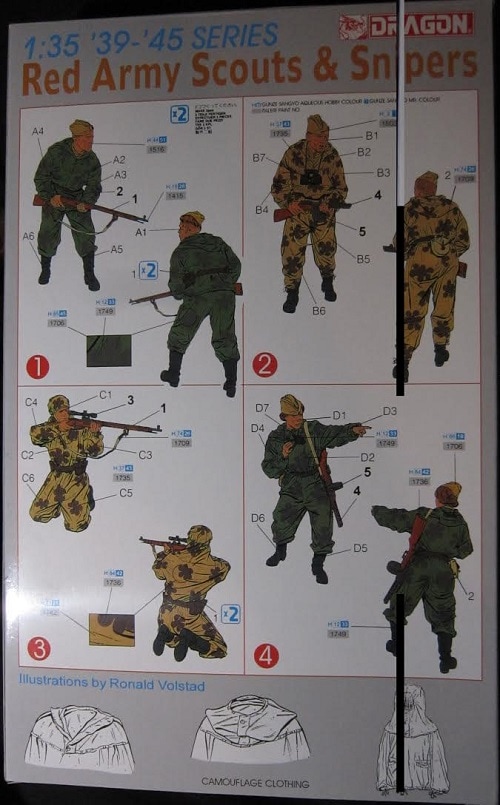 This kit contains a large and a small light grey tree. Each is in a sealed cello bag. The small tree in it's cello is inside the cello with the large tree.

The other two are divided into seperate heads, torsos, arms and legs. 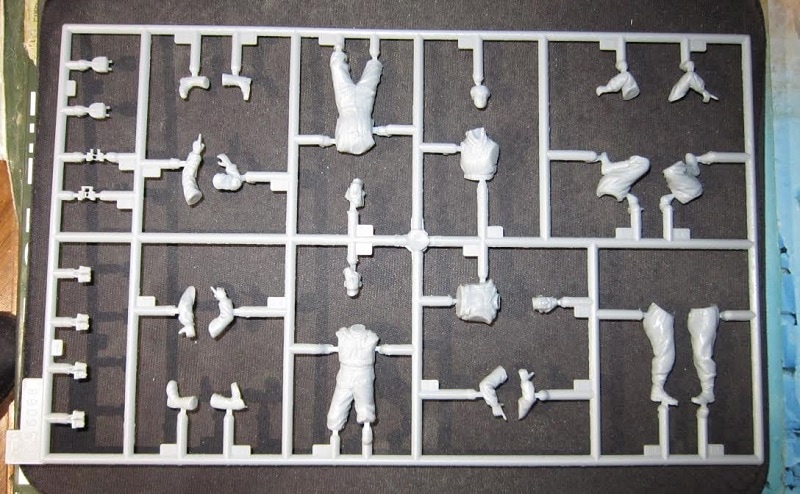 ​
These are neat Soviet figures. They are well detailed and animated.
​I bought my kit at my local hobby shop back in the late 90's.