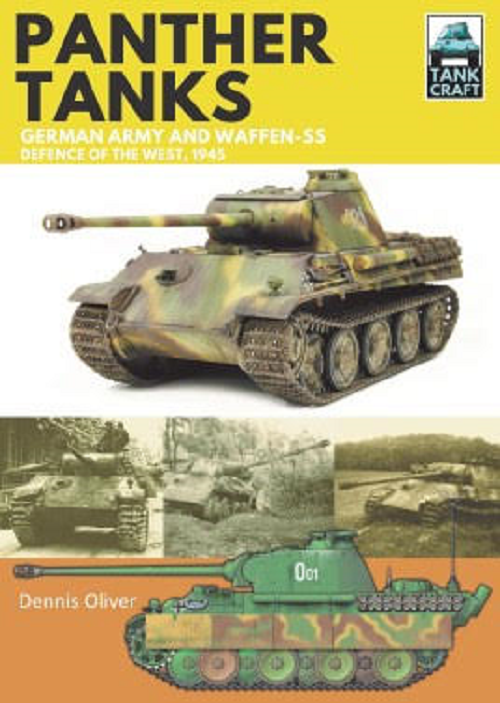 At the bottom is a Befelspanzerwagen V Panther of Panzer Regiment 130. This vehicle is also shown and discussed on page 24 of the camouflage and markings section of the book.

The back cover has 4 illustrations on it:

At the top is a black and white wartime photo shown in March 1945 of a heavily-camouflaged Panther Ausf. D that is said to have taken part in the fighting for the Rhine crossings. Many of these older tanks were drafted from training establishments and formed into ad-hoc Kampgruppen at the time.

The third black and white photo shows the inside of the devastated MNH Plant at Hannover in May of 1945. Shown are cupolas lacking the metal ring for the anti-aircraft machine gun and feature of the simplified mount introduced in March 1945.

The fourth illustration is a color profile of a late Panther Ausf. G that is shown on page 22 in the book.

In late 1944 and 1945 the Panther tank played an important role in Germany's desperate efforts to stem the Allied advance on the Western Front. The Panther perhaps the best armored vehicle produced by Germany during WWII, was the key element in the Wehrmacht's defensive tactics.

In rearguard actions and counter-attacks , it took a prominent part in the last German offensive of the war in the Ardennes during the Battle of the Bulge.
So, it is an ideal subject for Dennis Oliver's latest volume in the Tank Craft Series. He uses archive photos and extensively researched color illustrations to examine the Panther tanks and units of the German army and the Waffen-SS panzer battalions that struggled to resist the Allied onslaught.

There are 25 black and white wartime photos of the Panther Ausf. G. Three of those are the walk-around type.

One map illustration and 4 organizational charts are included in the book.

There are 2 black and white photos of a befehlswagen V.

There are 9 wartime color photos of the Panther Ausf. G.

A key section of this book displays available model kits and after-market products.

Built up models shown are:

A 1/35th scale DML Dragon Panther Ausf. A as 2 box arts and one Ausf. G box art and 7 color walk-around photos of the G made up.

A 1/35th scale Takom Panther Ausf. D box arts and one as it made up.
Meng makes a 1/35th scale Ausf. A & D. Four color walk-around type photos show the D made up.

Rye Field makes 1/35th scale models of the Ausf. D & G. There is one color photo of either the D or G built as a cutaway type model.

A 1/35th scale Ausf. G by Amusing Hobby is shown in two color box arts and made up.

A 1/35th scale Trumpeter/Hobby Boss Ausf. D  is shown in 4 color walk-around photos and made up.

A 1/35th scale Italeri D & A color box arts are shown with the A made up and with 5 color walk-around photos.

A 1/76th scale Revell & Airfix Ausf. G as three color walk-around photos of it made up. But not said if it is the Revell or the Airfix one?

Royal Model 1/35th scale shown in 3 color walk-arounds on either a Ausf. A or G kit made up.

Dennis Oliver is the author of over 20 books on the Second World War armoured vehicles.

I want to thank Casemate Publishers, who are the N. American distributor of Pen & Sword books for this review sample. Thanks to Pen & Sword also.

All of Pen & Sword's titles can be seen on Casemate's site at:
www.casematepublishers.com