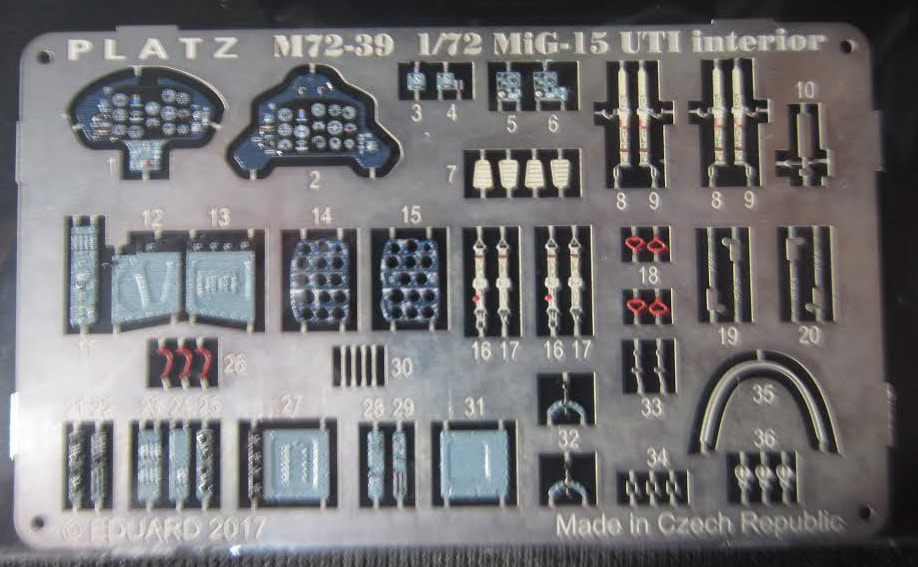 This brass PE fret comes in a sealed cello bag with card at the top with a hole in it to allow the product to be displayed on a hook at a hobby shop.

The instructions consist of a single sheet in 8 1/4" x 11 3/4" format printed on both sides and folded several times to fit the cello bag.

The instructions show 9 assembly drawings that are not numbered. Platz's street address in Shizuoka City, Japan, it's telephone and FAX numbers are provided as well as its web address.

The PE set is a cooperation between the two companies, because the fret has "Eduard 2017 & Made in Czech Republic" etched into the it.

Some of these parts are very tiny and will take real delicate handling with a pair of pointed tweezers to place them on the Mig-15UTI model by Platz (reviewed elsewhere here).

That is if you can even handle them at all. The smaller parts aren't much wider than a human hair.

I had some other PE sets from Eastern Europe years ago that were over-egineered and had many microscopic parts that were impossible to pick up or glue to anything other than your fingers.

The large parts are useful though.