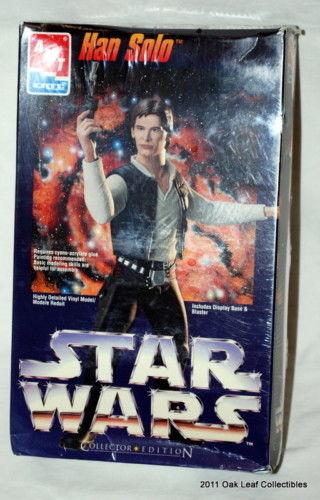 AMT/Ertl was based in Dyersville IA at one time. Ertl is still there and has done farm toys for many years. However, the company has changed hands a few times and the plastic kits of things other than tractors and plows etc. are all but gone. This kit has a copyright of 1995 and I bought it back about then for seven bucks at the factory discount store. It is now long out of production, but can be found multiple times still available on eBay.

Han Solo is a character in the original trilogy and sequel trilogy of the Star Wars universe. He is portrayed by Harrison Ford. He and his co-pilot, Chewbacca, become involved in the Rebel Alliance which opposes the Galactic Empire. During the course of the Star Wars story, he becomes a chief figure in the Alliance and succeeding galactic governments. Star Wars creator George Lucas described the character as "a loner who realizes the importance of being part of a group and helping for the common good"

This kit comes in a shrink-wrapped end opening type box. I am no fan of this type of box, as parts seem to find their way past the end flaps to become lost. Give me a tray and lid type box any day.

The box art shows the model made up. Han is holding ray gun in his raised right hand nd he is wearing a white shirt and black vest and pants. His belt has several metal fixtures on it. He is posed against an illustration of a swirling galaxy. The box art says he is highly detailed vinyl figure and that the kit includes base and his BLASTER (ray gun). The kit is called a Collector Edition.

On one end flap is Ertl’s address and the copyright date of 1995.The kit was made in China and the box printed and packed in the U.S. The kit is authorized by Lucasfilm who produced the movie and all rights are reserved.

We are told to please retain the address and that the kit is not suitable for children under 8 due to small parts they may swallow. This is all in 10 different languages including English.Ertl’s commitment to quality is given and their phone number to call with any problems with the kit.

On one side panel it says that the kit is highly detailed and vinyl, the kit has complete assembly instructions and a painting guide included, but paint and cement are not included. This is said in English, Spanish, French, Italian, Danish, Portuguese, Swedish, German and Japanese, each tagged with a color flag of their countries. 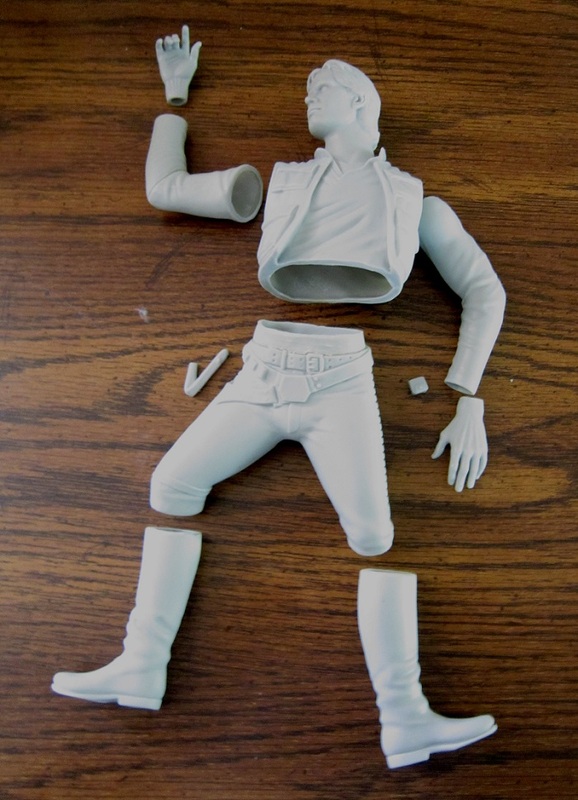 There are there are 3 jet black vinyl parts that include: his holster, his ray gun and a tube that goes on his belt (what that tube would hold I don’t know).

The ray gun or BLASTER looks like a German Mauser broom-handle pistol with a bunch of vent ribs on the barrel. This really tickles me. 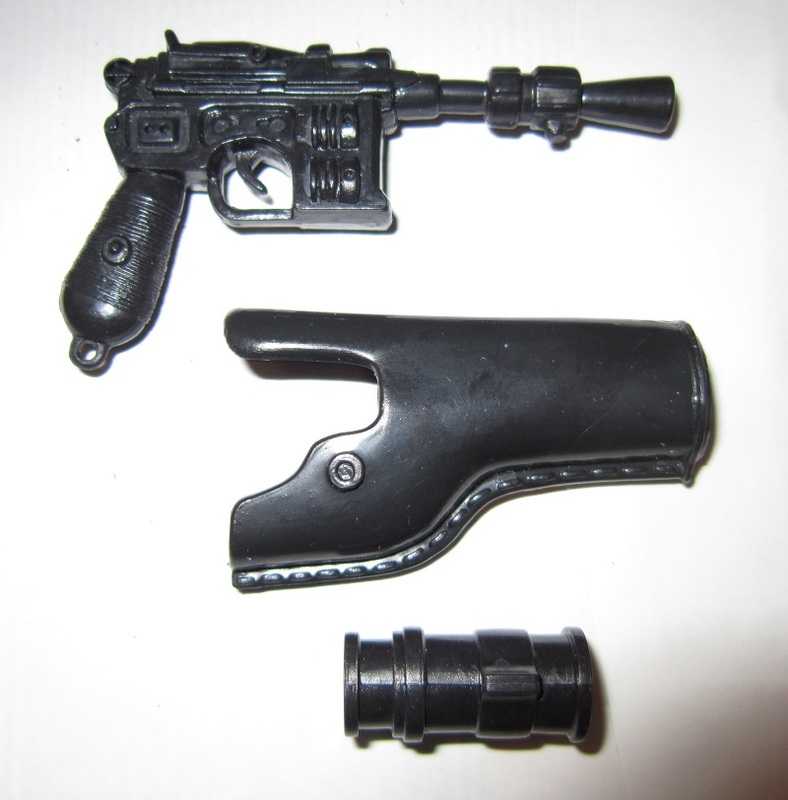 There is a black kidney-shaped base in another sealed cello in the kit. It says Star Wars in raised letters on it,.

The instructions and several other sheets of stuff complete the kits contents. There are NO decals in the kit, nor does the model really need any.

The instructions consist of a single sheet that is folded in the center to create 4 pages in 7 ½” x 8 ½” page format.

Page 1 of it has a black and white repeat of the box art and that it is a highly detail vinyl model kit, followed by the copyright of 1995 and that the kit is authorized by Lucasfilm.

Pages 2 and 3 have a grand total of 4 assembly steps. Step 1 shows shaded out sections of the parts that have to be removed before assembly.

Step 2 is assembly of the whole figure other than the BLASTER in Solo’s right hand.  All colors for the parts are called out with squares that have alphabet letters in them.

Step 3 is adding him to the black kidney-shaped base in the kit.

Step 4 is putting the BLASTER in his hand. I dry fitted this and it looks like his fingers will have to be compressed more to hold it better. It says in the kit that the vinyl can be bent with gentle heating with hot water.

Page 4 says to look for 2 other vinyl model figures from AMT: Star Wars kits no. 8783DO of Luke Skywalker and Kit no. 8784DO of Darth Vader.

Below this are phone numbers inside the USA and Canada and one for outside to USA to call with any kit problems. Also an invite to visit the plant and take a tour is mentioned with another phone number provided to call to make reservations for a tour. Next is Ertl’s street address again in Dyersville, IA.

Another sheet in the kit has IMPORTANT assembly instructions and an international assembly symbol explanation in 9 languages including English. The back of this sheet has a color listing in the 9 languages  26 different colors are listed. I cannot believe that you would really need that many!

A third large sheet has written assembly instruction on the front and back of it in the 9 languages.

There is an order blank to join the Star Wars club for $9.95 which gets you the Star Wars Insider quarterly magazine one year subscription, the Jawa Trader, which is the official catalog of Star Wars and Indiana Jones collectibles. Plus an exclusive membership kit loaded with collectibles for members only!

Finally, there is a small yellow card that is for subscription to the Blueprinter publication hat has info about new AMT releases, a question and answer section, customizing ideas and how to section, shows and events, classified ads, special offers on AMT kits and promotions with 6 issues per year.

I did the trimming of the excess vinyl on the parts per the instructions and only cemented the head to the torso so far. All assembly has to be done with super-glue.

I highly recommend this kit to Star Wars fans.