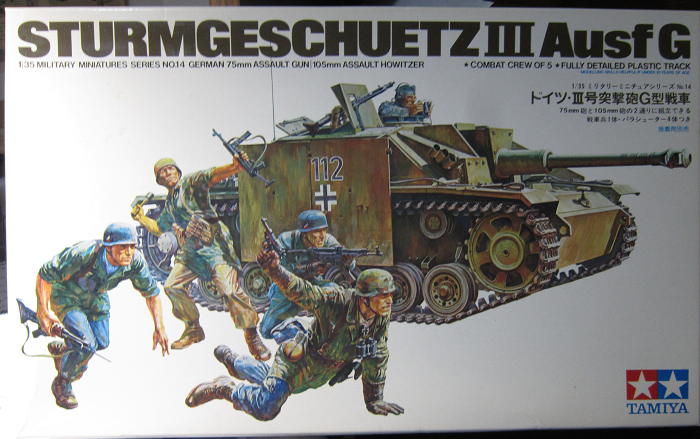 It was built on the chassis of the proven Panzer III tank, replacing the turret with an armored, fixed superstructure mounting a more powerful gun.

Initially intended as a mobile assault gun for direct-fire support for infantry, the StuG III was continually modified, and much like the later Jagdpanzer, was employed as a tank destroyer.

Tamiya is an old prolific model company based in Japan. They manufacture all manner of model subjects in the popular scales.

The box art shows a Stug. III and 4 Falshirmjager (paratrooper) figures posed against one of Tamiya's signature all white backgrounds, that they use for the majority of their box arts.

The tank is in a base of earth yellow with green squiggle pattern and a red no. 112 outlined in white over the German cross on the sides of the skirts.

One standing figure wears a tan uniform with a camouflaged smock. He is throwing a potato-masher type grenade in his right hand and is holding up a MP40 in his left hand. He has ammo pouches on his belt,.

The next paratrooper is running in a crouched position. He is wearing a grey uniform and is carrying a MP44 in his right hand.

The third paratrooper is prone and holding himself up with his left arm and has a Luger pistol in his upraised left hand. He wears a tan camouflaged smock, grey trousers, low black shoes, has a pair of binoculars slung around his neck and a canteen and pistol holster on his belt.

Behind him is the fourth paratrooper, who is kneeling and aiming a MP44. He is in an all-grey uniform.

There is a fifth figure of the tank commander looking out of the top of the tank. He is in a grey uniform with a cloth side cap. He is wearing head phones and holding a pair of binoculars.

One side panel begins with a small color repeat of the box art, followed by a paragraph all in Japanese, that probably is the history of the tank.

There are 2 color side views of the tank, showing the short barreled and long barreled versions. Both are in overall earth yellow and show no markings.

​The other side panel has 5 color box arts of other 1/35th scale tank kits that Tamiya manufactures. All are in scenery box arts, which is not Tamiya's usual all-white.

No kit numbers are provided for these 5 kits. Kit was made in Japan.

The instructions consists of a single-sheet that accordion-folds out into 8 pages in 7 1/2" x 10 1/4" page format.

Page 2 has a parts list and part tree illustrations, over the first 2 assembly steps.
Page 3 through 6 gives a balance of a grand total of 14 assembly steps.

Assembly number 14 is for the 4 paratrooper figures.

Page 7 is a marking and painting guide, showing a paratrooper in a camouflaged smock and a front and rear view and 2 side-views of the Stug. III.
Both views are in a tan base with green squiggle patterns.

The long barreled one has a black helmet (Guderian Division) logo before 112 on the sides of the turret. (the box art scheme already described above).

The other Stug. III is in the same camouflage pattern with a black 124 over the German cross on the sides of the skirts.

The bottom of the page has a black and white photo of the model made up twice with the figures. Text is all in Japanese.

Also a black and white photo of the long barreled one in a museum.
Trees are alphabetized. 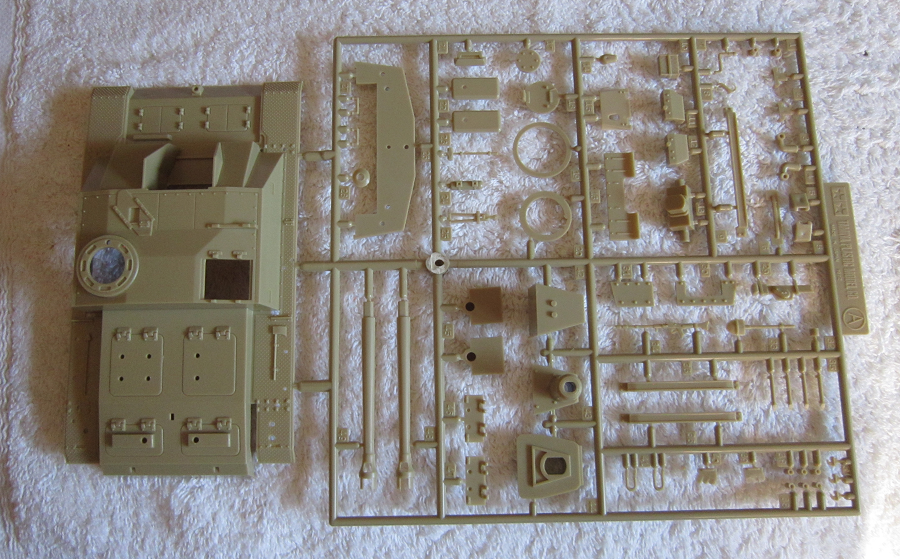 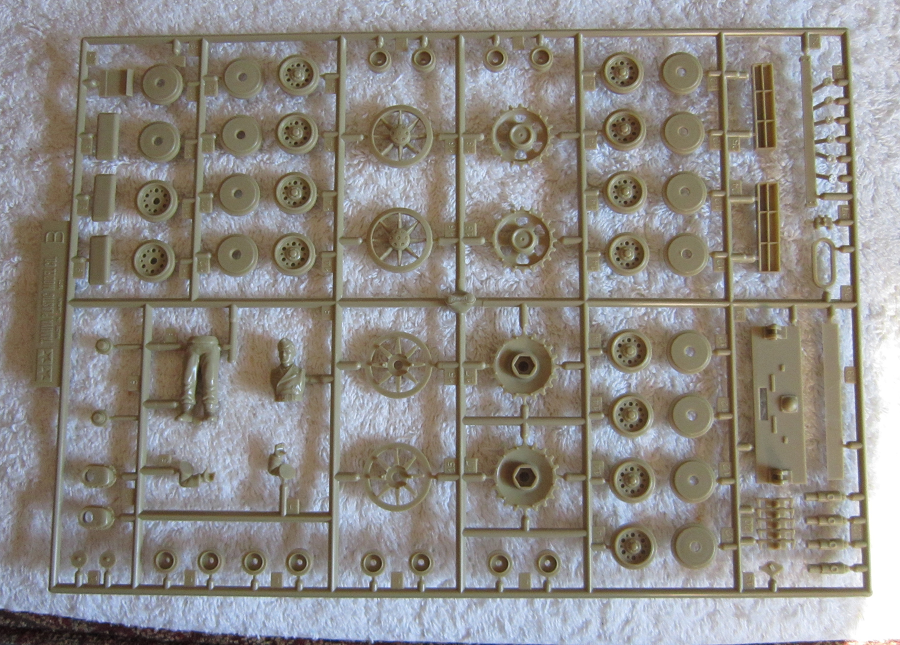 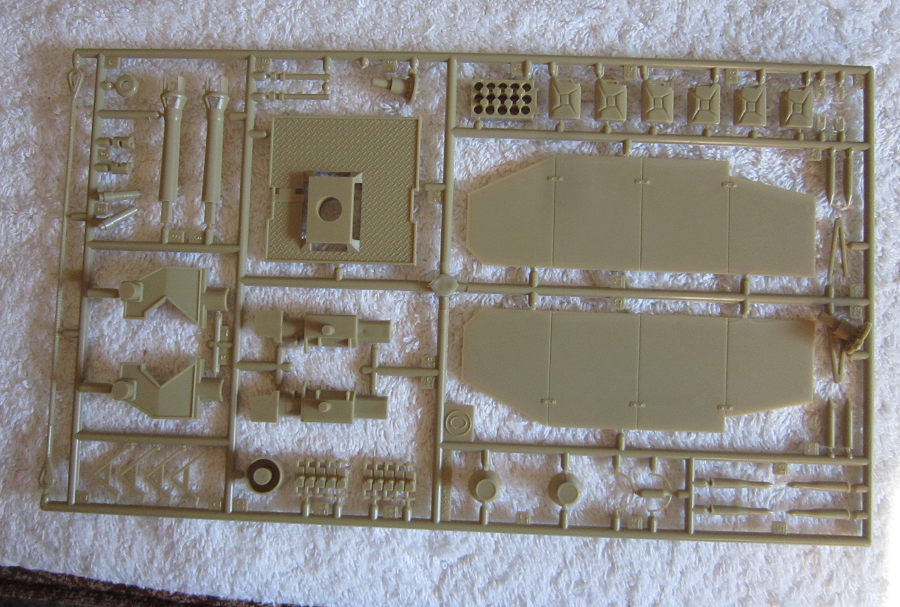 ​Next is the tan hull tub part. 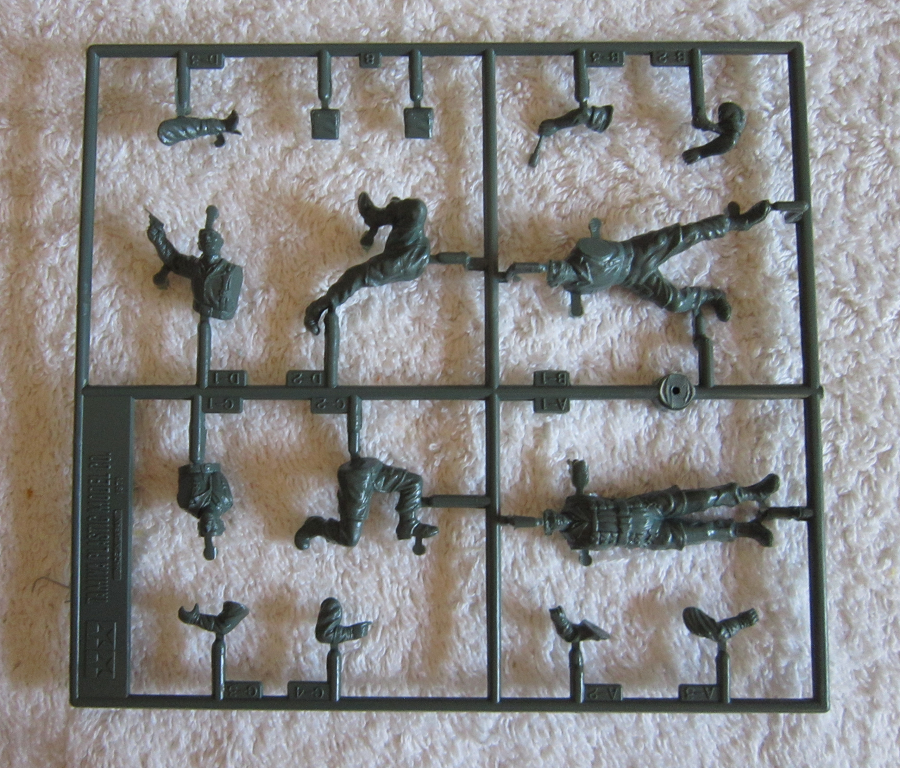 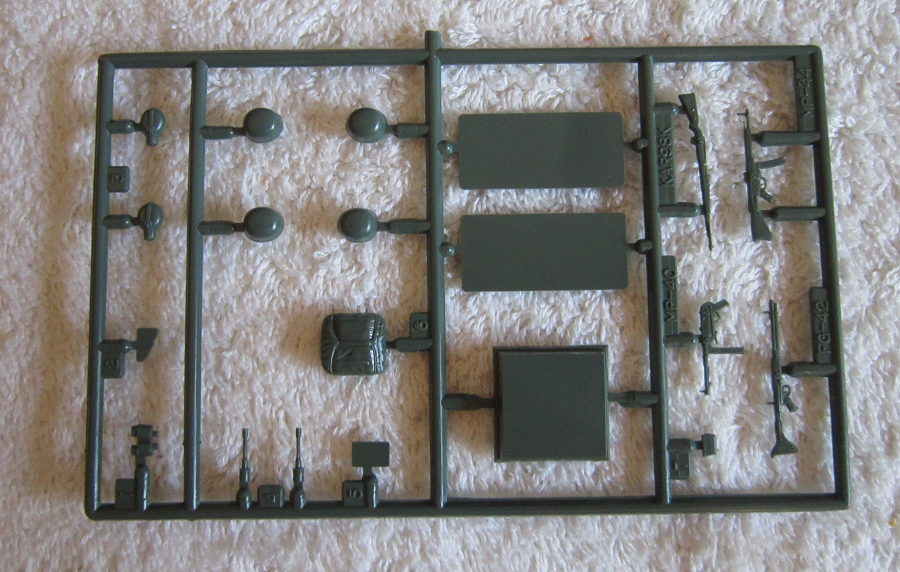 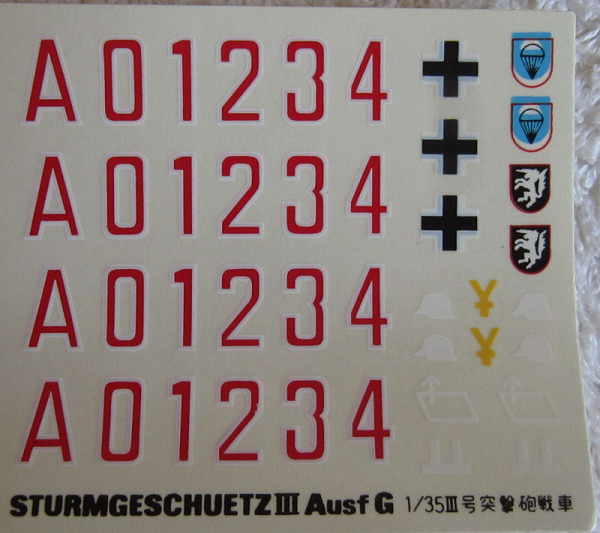