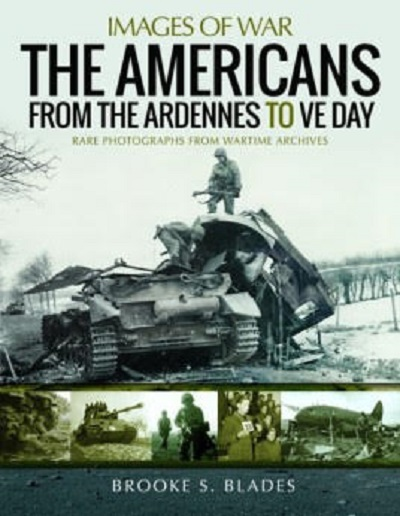 The Americans From the Ardennes to VE Day

Launched in December 1944, the Nazi’s Ardennes offensive, known as the Battle of the Bulge, was one of the most dangerous periods of the war. During six weeks of desperate fighting, more U.S. soldiers were killed, wounded or reported missing than any battle in American history.

The Rhine was crossed in March 1945, first by the seizure of the railway bridge at Remagen and then by the combined American, British and Canadian ground and airborne operation code-named Varsity. In the closing stages of the war, the western allies pushed remorselessly into the heart of Germany. Shocking evidence of Nazi atrocities was uncovered.

Berlin fell to the Russians in early May and the Allies met up on the River Elbe. In the chaos that followed, Germany was divided into four zones of occupation. The immediate tasks were ensuring the survival of the civilian population, establishing law and order and the capture of war criminals.

In the Images of War style, this book graphically describes the magnificent role played by U.S. forces under General Eisenhower’s overall command.

At the top there is a photo of a U.S.infantry-man standing atop a knocked out Mark IV, on the road to Witzfeld on the 17th December 1945.

At the bottom of the cover art, reading from left to right. The first photo is of 2 U.S. infantry-men seated and resting against a Sherman tank in Geich, Germany on 11 December 1945.

The second photo to the right shows American troops riding on a captured Tiger B tank that is painted with the white American star, in Geronseller, Germany, 15th December 1945.

The third photo shows some of the U.S. 17th Airborne troops advancing after landing.

The fourth photo shows Fritz Kraemer (standing) who served as the Chief of Staff for the German Sixth Panzer Army during the Ardennes offensive. The former Brigadefuhrer was among 74 defendants tried for the murders of American soldiers and Belgian civilians during the offensive. Joachim Peiper was seated to the left of him at this war-crimes trial.

The fifth photo shows one of the C-46 transports, marked H2, that crashed on take-off, but fortunately did not burn.

The back cover has 3 more black and white wartime photos on it. Reading left to right, the first photo shows a member of the U.S. 2ND Ranger Battalion planting mines along the edge of the road near wirtzfeld, 18 December 1945.

The book contain 279 black and white wartime photos and there is a postcard inserted to use to send to Casemate to hear more about other titles by Pen & Sword and to receive 30% off your next book purchase.

There are 3 map illustrations included.

This is one neat picture album. It will be of great interest to modelers and historians alike.

I sincerely thank Casemate Publishers, the North American distributor of Pen & Sword books for this review sample, and the folks at Pen & Sword.

All Pen & Sword titles can be viewed on Casemate’s website at:
​www.casematepublishers.com