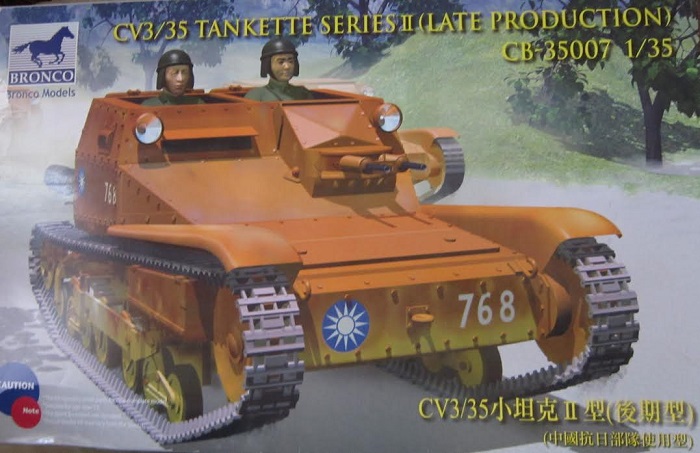 The L3/35 was developed from the four Carden Loyd Mark VI tankettes imported from Britian in 1929 by Italy. The first vehicle developed by the Italians from the Carden Loyd tankette was designated as the CV-29. The "CV" stood for "Carro Veloce" or "fast tank". Only twenty-one CV-29's were built.

In 1933, a new design was built jointly by the Fiat Company of Turin and the Ansaldo Company of Genoa. This vehicle was introduced as the Fiat-Ansaldo CV-33. About 300 CV-33's were built.
In 1935, a slightly improved model of the CV-33 was introduced and designated as the CV-35. The primary differences were that the armor was bolted rather than riveted and the replacement of the single 6.5 mm machine gun with tandem mounted 8 mm machine guns. Many older CV-33's were retrofitted to meet the specifications of the CV-35's. In 1938, both vehicles were re designated as the L3/33 and the L3/35.

Also in 1938, a further development of the L3 vehicle was created and designated as the L3/38. It does not appear that many of these vehicles were built or saw service. The torsion bar suspension of the L3/38 differed greatly from the suspension of the L3/33 and L3/35. The L3/38 also featured a single 13.2 mm Madsen machine gun.

The official Italian classification of the L3/35 was as a light tank. However, this type of vehicle is classified as a "tankette" by Anglo-American militaries.

With very few exceptions the L3/35 was a lightly armored two-man vehicle typically armed with two tandem 8 mm machine guns. Other than the number and type of machine guns, the differences between the L3/35 and the L3/33 were not many. Both featured riveted and welded construction. The vehicle's commander/gunner sat on the left and the driver sat on the right. The engine was mounted transversely in the rear. A circular radiator was mounted behind the engine.

Bronco is a prolific model company based in Hong Kong, China.

The box art shows a CV3/35 (or L3/35) moving through a clearing in a woods. It is overall flat red-brown with a Chinese "Sunburst" insignia on the left side of the bow and a white 768 on the right. Two crewmen are looking out of the upper hatches. Each wears a leather tanker's helmet.
This tankette was with the 7th Tank Battalion, 1149th Company, Chinese 200th Armoured Division, Xiantan, Hunan, China 1938.

One corner of the box art says that the kit is for modelers over 12 years of age.

One side panel says the kit contains decals for China, Germany, Hungary and Italy, followed by color illustrations of the brass PE fret and the decal sheet in the kit.

Bronco's street address in Hong Kong, their e-mail address and their web site address are supplied.

The other side panel has color 3-view of a CV3/35 in Italian markings. It is overall sand with a red rectangle that has 3 vertical white stripes on it and a white number 1 above that on the hull sides.

This kit contains 5 tan parts trees, a clear parts tree, a brass PE fret, the decal sheet and the instructions.

The instructions consist of a staple-bound booklet printed in color on slick-coat paper. It has 16 pages in 8 1/4" x 11" page format.

Page 1 begins with a color repeat of the box art, followed by the history of the CV3/35 in English, German and Chinese.

Page 3 has the parts trees illustrations. Some parts are shaded out as being excess and not needed to complete the model.

Page 4 through 14 give a grand total of 19 assembly steps.

Page 15 has a 4-view illustration of the box art subject. It further shows that the "Sunburst" and the white number 768 are on just one side of the hull.

A second 3-view is of tank with the Hungarian 1st Cavalry Division, Eastern Front, Croatia, 1943. It is in a base of earth color with green and dark brown wide wave pattern. It has a large white skeletal cross on the sides of the hull with a white number 106 above it. On the left side of the front of the fighting compartment there is another white 103 at a slant. On the front of the bow on the left is a white number H-140. There is a white triangle on the right side of the bow.

A CV3/35 with the German 7th Prinz Eugen Division of Waffen SS, Bosnia, 1944. It is in a pattern of wide waves of brown, medium green and sand. It only carries a medium sized skeletal white German cross on the sides of the hull.

A CV3/35 that is the Italian scheme on the side panel (already described above).
The copyright given at the bottom of the page is 2008 for this kit. 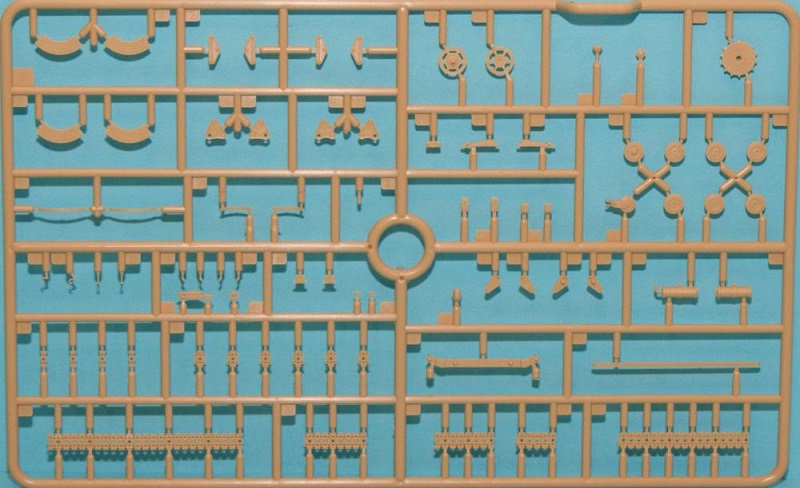 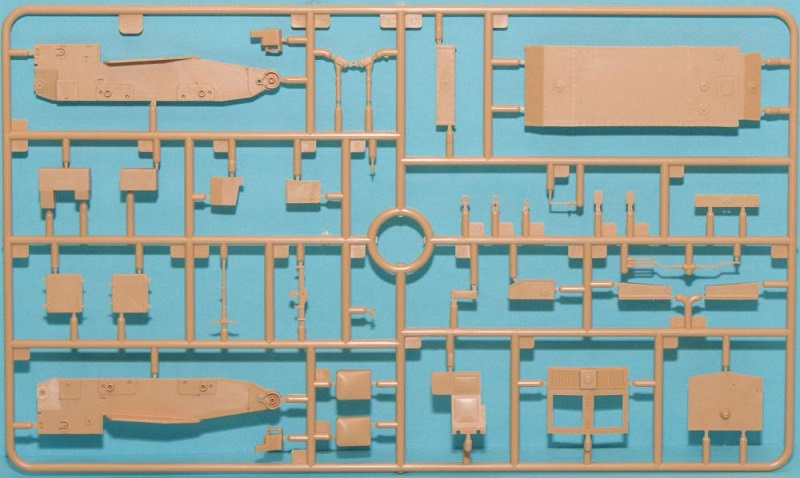 ​Letter C parts tree is the clear tree. It just holds 2 headlight lenses.
Tan letter D parts tree holds a lot of small parts for the interior that I cannot readily identify and name. Sorry. There are 69 parts on this tree.

There is no letter E parts tree 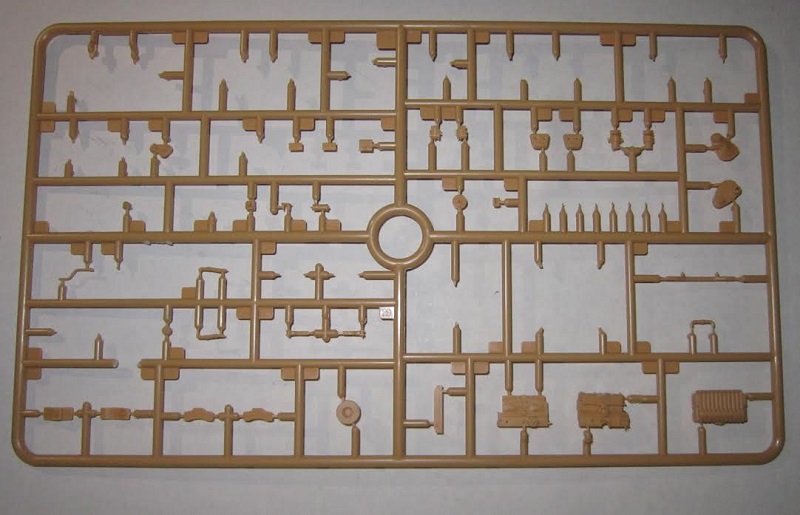 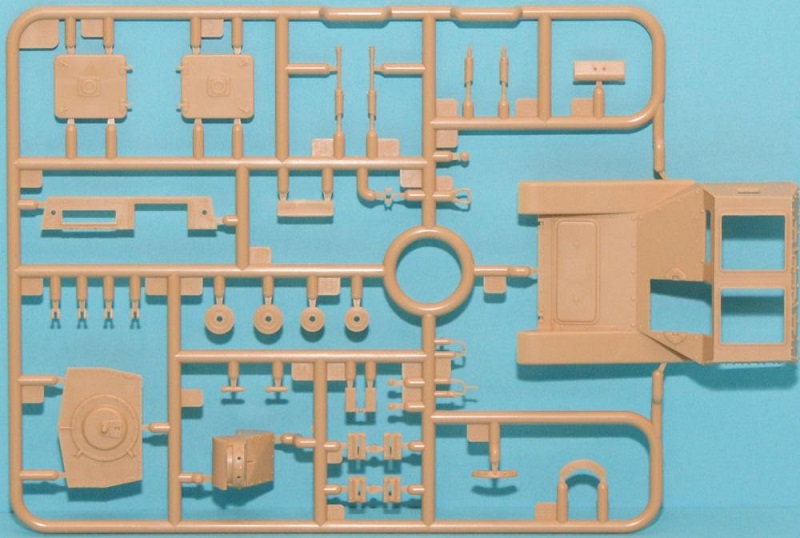 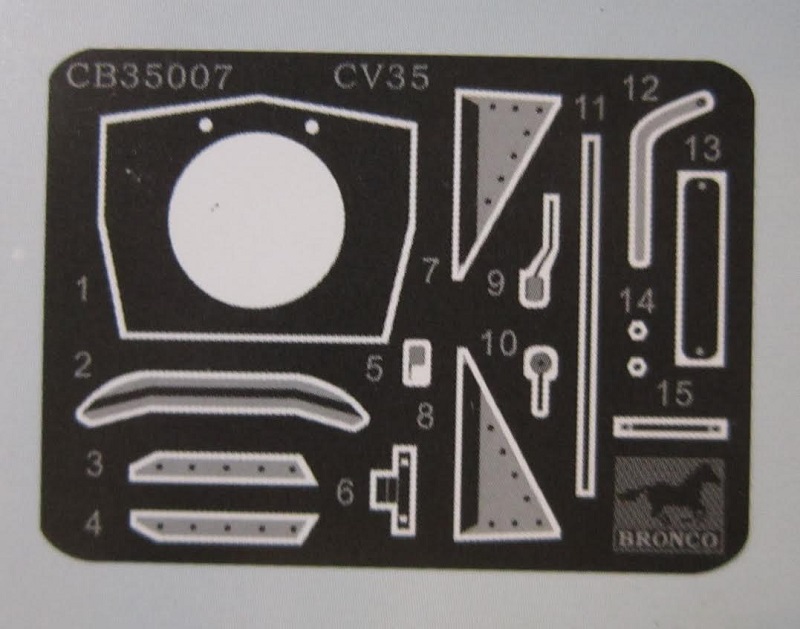 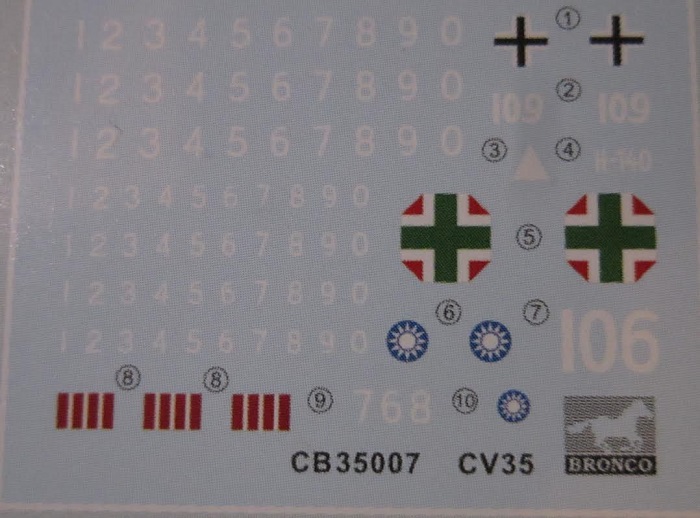 ​Bronco has marketed 5 boxing's of this model:

This one, a flamethrower version, a CV3/33 Series II version (twice) and a L35c.

I purchased a decal sheet by the Italian brand RCR Models. It provides markings for several different Italian WWII AFV's including this CV3/35. 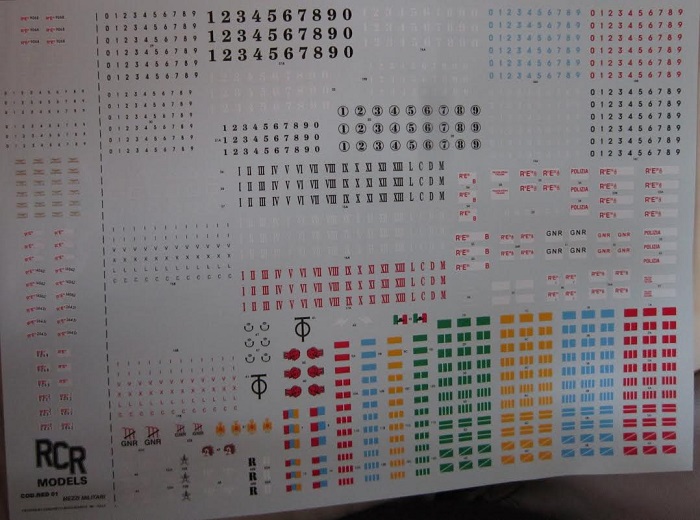 ​Although a relatively small model, this kit has many parts. Some of them are nearly microscopic. It is highly detailed.

I only recommend it to modelers of advanced skills.
I did a review of the flamethrower version here on Indy AMPS and it can be seen in the archives.