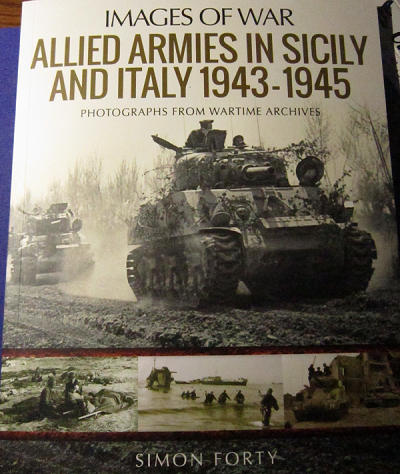 The Italian campaign was one of the most debated of the Second World War, splitting the American and British allies, and causing great disharmony. After the fall of Rome and the surrender of Italy, the invasion of Normandy led to the Italian campaign becoming a side show as the “D-Day Dodgers” fought their way through Italy to the Alps against a grinding defence and extreme weather.

In a sequence of 200 wartime photos, Simon Forty sums up the major events of the conflict from the landings on Sicily to the crossing of the Po. Commanded first by Sir Harold Alexander and then Mark Clark, the Allied armies (U.S. 5TH and British 8th) drew men not only from Britain, the United States, France and Poland, but from all over the Commonwealth – from Australia, Canada, India, New Zealand and South Africa – as well a such other countries as Brazil, Czechoslovakia, Greece and Palestine.

The devastation caused by the war in the cities, towns and countryside is part of the story, but perhaps the most powerful impression is made by the faces of the soldiers themselves as they look out from the Italian front of so long ago.

Simon Forty was educated in Dover and the north of England before reading history at London University’s School of Slavonic and East European Studies. He has been involved in publishing since the mid-1970s. First as editor and later as an author, son of an author and RAC Tank Museum curator.

He has continued in the family tradition writing mainly on historical and military subjects, including books on the Napoleonic Wars and the two world wars. Recently he has produced a range of highly illustrated books on the Normandy battlefields, the Atlantic Wall and the liberation of the low countries with co-author Leo Marriott.

The cover art shows a black and white wartime photo of 2 Sherman tanks rolling down a dirt road through a woods, over 3 smaller black and white photos of two soldiers tending a casualty on a stretcher,  troops wading through water from a landing ship to the beach and 2 Shermans passing wrecked buildings on a city street.

The back cover has 3 more small black and white wartime photos on it. One of soldiers marching past a building in a city, British armored cars parked in a city and a Priest tank rolling down a city street.

This book holds 196 black and white wartime photos. My opinion is that the majority are dark and dismal.

There is also 8 maps, a illustration of a German propaganda poster and a data list.

Pictures are of Shermans, troops, trucks, a soldier riding a donkey, terrain, officers, a Spitfire, a wrecked Bf-109, a couple wrecked Tiger tanks, a wrecked Italian Macchi MC.202 fighter, a anti-aircraft gun emplacement, jeeps, a German 88mm howitzer, a Guom soldier in native dress, the British HMS Abercrombie ship, the SS Robert Rowan ship, a British glider, beach landings of troops, a DUKW amphibian, a German armored train, a wrecked Pz.Kpfw. IV, a concrete pill box, a M3 75mm GMC half-track, the German “Azio Annie” rail gun, a photo of the Leaning Tower of Pisa and the Colosseum in Rome with 2 Shermans driving past it.

This is a neat picture book. However, there are no color illustrations in it. Text walks you through all the action nicely.

I want to sincerely thank Casemate Publishers for this review sample. Casemate is the North American distributor of Pen & Sword books and all their titles can be seen on Casemate’s website at:
www.casematepublishers.com