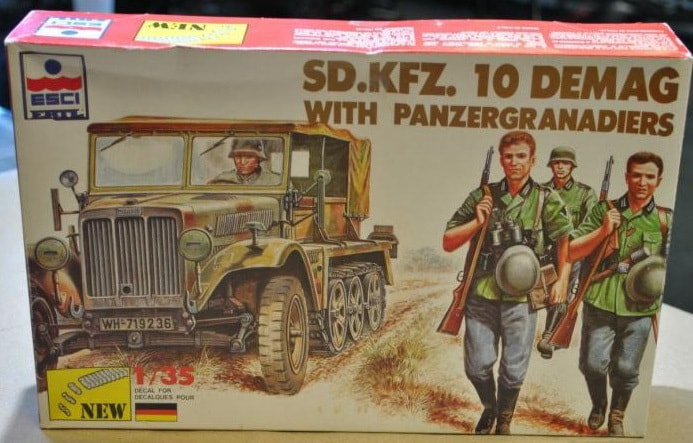 The Sd.Kfz. 10 (Sonderkraftfahrzeug - special motorized vehicle) was a German half-track that saw widespread use in World War II. Its main role was as a prime mover for small towed guns such as the 2 cm FlaK 30, the 7.5 cm leIG, or the 3.7 cm PaK 36 anti-tank gun. It could carry eight troops in addition to towing a gun or trailer.

The basic engineering for all the German half-tracks was developed during the Weimar-era by the Reichswehr's Military Automotive Department, but final design and testing was farmed out to commercial firms with the understanding that production would be shared with multiple

companies. Demag was chosen to develop the smallest of the German half-tracks and spent the years between 1934 and 1938 perfecting the design through a series of prototypes.

The chassis formed the basis for the Sd.Kfz. 250 light armored personnel carrier. Approximately 14,000 were produced between 1938 and 1945, making it one of the most widely produced

German tactical vehicles of the war. It participated in the Invasion of Poland, the Battle of France, the Balkans Campaign and fought on both the Western Front and the Eastern Front, in North Africa and in Italy.

I bought this kit years ago at Ertl's factory discount store.

The kit comes in a jam-packed and shrink-wrapped tray and lid type box.

The box art shows a Sd.Kfz. 10 moving down a snow covered road with 3 German infantrymen walking beside it.

The Sd.Kfz. 10 is in a base of earth yellow with dark green bands. It has a white tactical symbol on the front of the right fender. The white license plate on the front has the black number WH-719238 on it. It's driver is wearing a steel helmet.

The 2 infantrymen in the foreground are bare-headed. Thier steel helmets are slung on their belts. The guy on the left has a pair of binoculars strung around his neck and a 98K carbine slung over his right shoulder. He has a leather pouch and ammo pouches on his belt.

The fellow to his left also has a 98K over his right shoulder and a potato masher grenade tucked under his belt.

The 3rd infantryman behind them is wearing a steel helmet.

All the figures are in field grey uniforms with black jackboots.

One corner of the box says that there are 15 figures in the kit. This is not true!! There are only 14.

A driver figure is shown in the instructions, but is nowhere included in the kit.

One corner of the box says that the decals are for Germany.

Side panels of the kit say that the model is not advised for children less than 10 years old. The box contains small plastic parts to make a 1/35th scale kit, but does not include cement or paint, in 6 languages, including English.

Ertl is mentioned as being in Dyreville, IA and the kit was molded in Mexico.
WHAT'S IN THE BOX:

There are 2 instruction sheets.

The first instruction sheet is a single sheet accordion-folded into 6 pages in 8 1/2" x 11" page format.

Page 1 begins with a inky black and white photo of an actual Sd.Kfz. 10 pulling a field piece in a woods, over the history of the vehicle in 6 languages, including English.

Page 2 through 5 give a grand total of 8 assembly steps.

Step 8 show a seated driver figure that is not included in the kit.

Page 6 has a 3-view for painting and marking and tech data about the D-7 in 5 languages, including English.

The vehicle is shown in overall panzer-grey with a choice of 2 license plates, 4 division marks and 3 tactical marks to choose from.

The small instruction sheet is printed on one side. It is 8" x 5" format and is instructions for painting the rubberized 14 figures.

Parts trees are  alphabetized and there are part number tabs next to the parts on the trees. The part trees are not illustrated in the instructions. 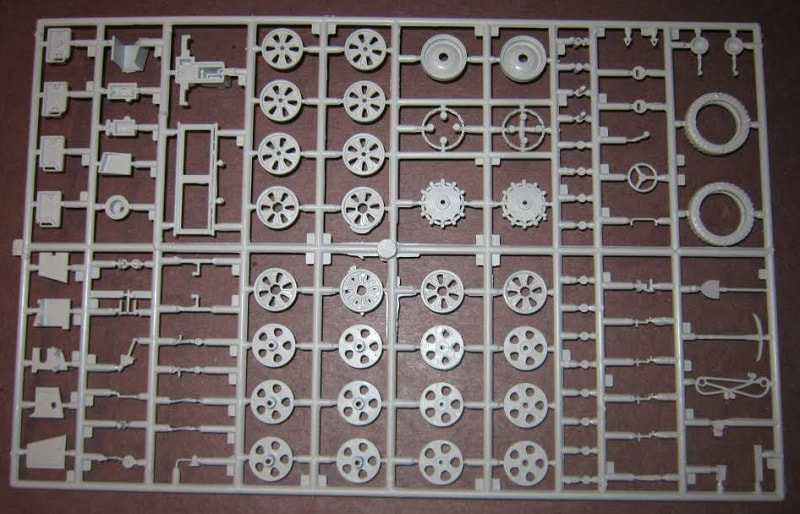 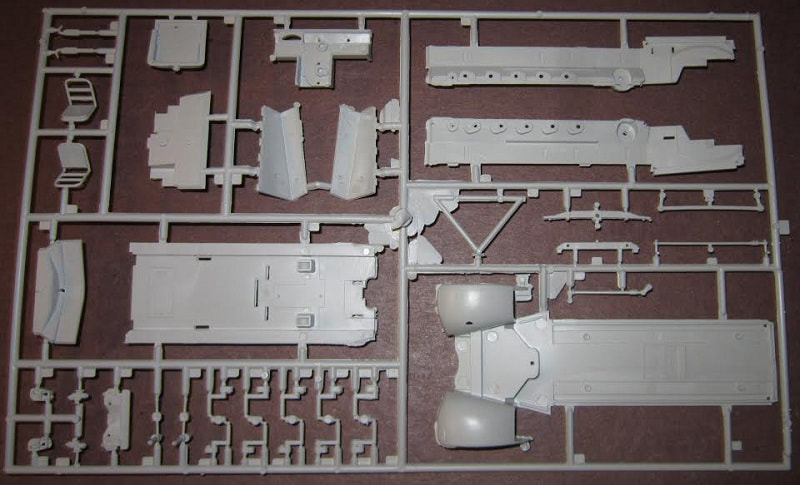 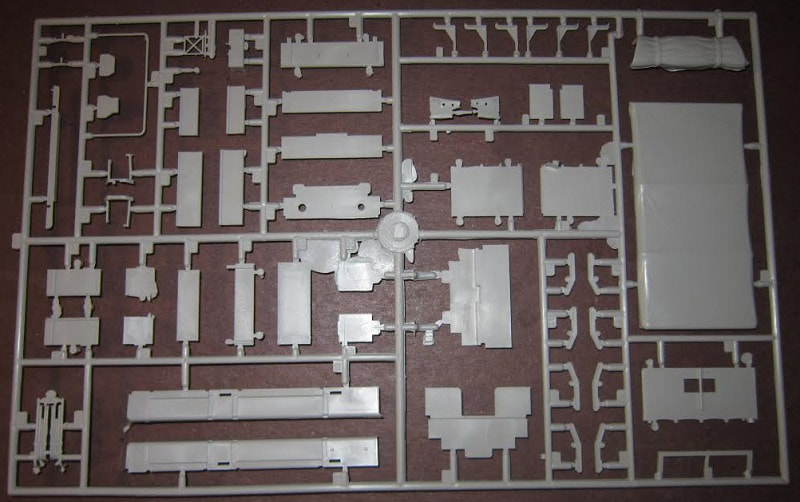 ​There are 4 lengths of silver vinyl treads. 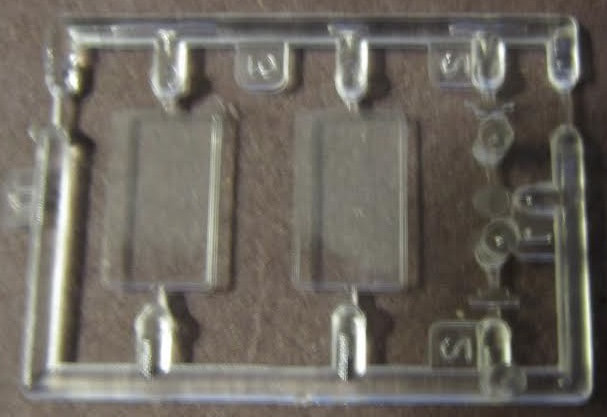 ​Next is the tree of red rubberized soldiers. (14 parts)

Two of the figures have lugar pistols in their hand, 5 have MP-40 machine pistols (2 of these guys are throwing potato masher type grenades), 5 are armed with 98K carbines and are kneeling. (2 of the carbines have scopes on them), the remaining 2 men are kneeling and firing Panzerschrecks (German Bazookas).

All the figures wear steel helmets and jack boots and various field equipment . 6 of them have a potato masher type grenade stuffed into the tops of their jack boots. All have base plates molded to their bottoms.

They are seamless, which is good because my experience with rubberized figures in the past proved that sanding or cutting off seams is impossible.

The detail on these guys is nice, but I doubt I will ever use them. 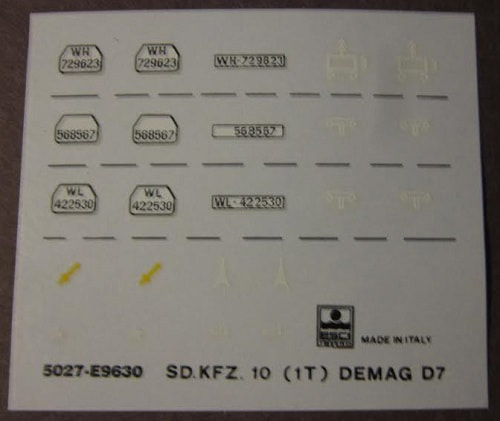 The vehicle is very good. I just wish that the driver figure shown had actually been included and the 14 figures were molded in styrene instead of the rubberized stuff.

I guess counting this missing figure is where Ertl/Esci came up with the claim there were 15 figures in the box and not the actual 14 in there. Also a cargo load for the rear would have been nice too.