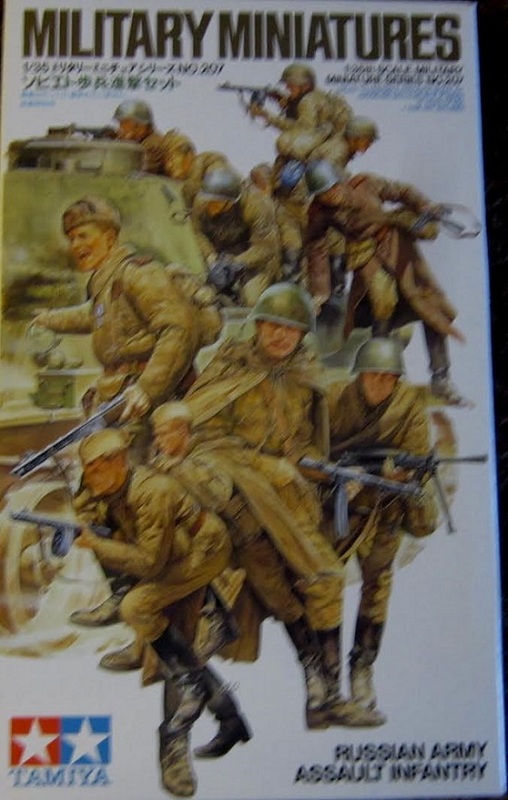 During WWII, the Russian Armed Forces consisted of five main elements; the Ground Forces, Navy, Air Force, National Air Defense and Armed Forces Support. The Ground Forces represented about 80 percent of the total manpower, being the largest in strength. It had approximately 5,300,000 military effective at the outbreak of the Russo-German War in June 1941.

However, devastating damage brought by the German Mechanized Forces resulted in more than 70 percent losses of its entire troop strength within 5 months. This led to a rapid reorganization of the Ground Forces, and with a help of the harsh winter climate of Russia, they managed to repel the German’s advance just in front of Moscow.

Due to the heavy losses, reorganized units became much smaller than before. Rifle Forces (infantry) reduced their divisional strength from 14,483 to 10,859. Tank divisions, which had possessed some 20,000  armored vehicles, lost about 70 percent of them at the initial stage of the war. Most surviving tank divisions were disbanded, and the available tanks and crews were re-assigned to much smaller units like independent tank battalions or tank brigades.

It was in 1945, just prior to the end of the conflict, that the Russian Armed Forces recuperated the pre-war level of their strength. The main strength of the Russian  counter-offensive was their tank troops. Following concentrated fire by their artillery units, the tank troops advanced in three groups, and many infantrymen rode on the tanks of the 2nd and 3rd groups.

This infantry practice was unique to Russian tactics and was called “Tankoviy Dessant” by the Russians. Since the Russian Ground Forces did not possess armored troop carriers like the German half tracks, an infantry battalion called the “Motor Rifle Unit” was attached to every tank brigade and assigned to close support  the tanks.

A Motor Rifle Unit consisted of about 500 infantrymen. PPSh-41 or PPS-43 machine guns were equipped as standard, plus the Degtyarev Pekhotniy light machine guns as support arms. Soldiers carried as many magazines as possible, and advanced while riding the tanks.  Once encountering and enemy’s defensive position, infantrymen would disembark from the tank, attack the position, and then return to the tank. These infantrymen were spearheads of the attack, and due to the enemy’s defensive fire, liable to sustain heavy casualties.

The standard uniform of the Russian infantrymen during WWII was a simple blouse called a “Gymnastiorka”. Early in the conflict, greatcoats and rain capes were often used as wintertime attire. In 1940, a quilted jacket called a “Telogrelka” was introduced, but not enough quantities were supplied in the beginning.

Tamiya is an older prolific model company based in Shizuoka City, Japan. They make all manner of model subjects in the popular modeling scales.

The box art shows 12 Soviet infantrymen. All of them are in winter gear. Seven are on top of a T-34 Soviet tank and five more are advancing next to it. All have machine guns. Seven wear steel helmets, three wear side caps and two wear wool hats with ear flaps. All of them wear jack boots.

The figures and the tank are posed against one of Tamiya’s signature all white backgrounds that they use on all their model kit box arts.

One side panel shows a small color side view of a T-34/76, followed by color illustrations of an entrenching shovel in it’s pouch, a PPS magazine pouch, a type 1915 field pack and a type 1938 field pack.

The other side panel has color illustrations of a Takarov pistol holster, a Degtyrev Pekhotniy light machine gun, a PPsH-41 machine gun with drum magazine attached and again without the magazine, a PPS-43 sub machine gun. They are followed by a paragraph in Japanese and Tamiya’s stree address in Japan. The copyright of the kit is 1996, followed by MADE IN JAPAN.

This kit contains 4 olive-drab colored trees of parts in 2 stapled-shut cello bags and the instructions.
Inside the tray, printed at the bottom, are the box arts of 15 other AFV kits that Tamiya markets. The walls at the end of the tray at each end show Tamiya brand cements and paints.

The instructions complete the kit’s contents and consist of a single sheet that is folded in the center to create 4 pages in 6 ¾” x 10 1/8th  page format, folded along it’s length to fit the box.

A second single sheet, printed on both sides and the same page size as the instructions has IMPORTANT  INFORMATION CONCERNING THIS KIT on each side in 12 languages, including English.

Page 1 of the instructions begins with the history of he Soviet infantry in English, followed by 4 illustrations of them and the history repeated again at the bottom of the page in Japanese.

Page 2 begins by showing tools, cement and a list of paint colors suggested to use to complete the figures, followed by CAUTIONS in multiple languages and the first 2 assembly steps for 3 of the figures.

Page 3 shows 3-views for assembly and painting  7 of the figures.

The top of page 4 has two 2-views for assembly and painting the final 2 figures.

Olive-drab letter A tree holds: 6 of the figures (33 parts) 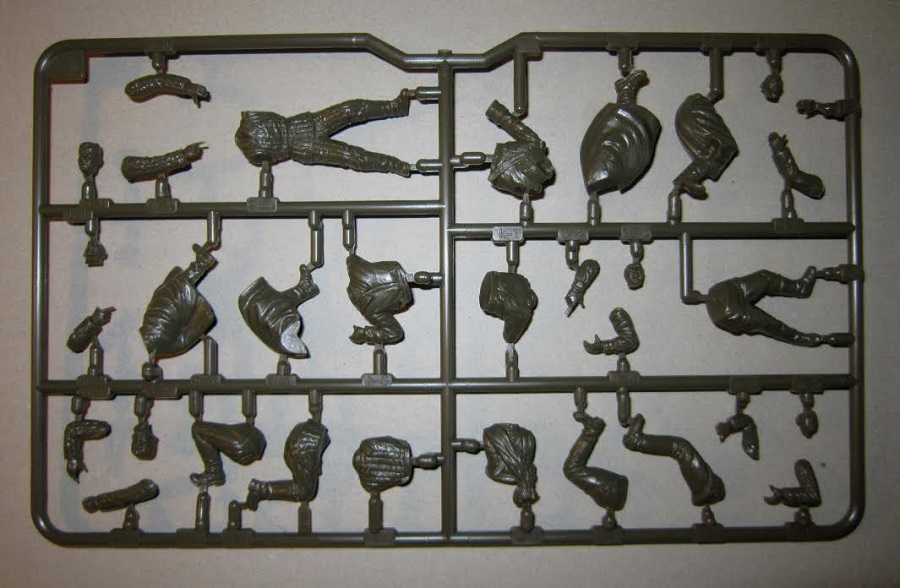 Olive-drab letter B tree holds: the other 6 figures (31 parts) 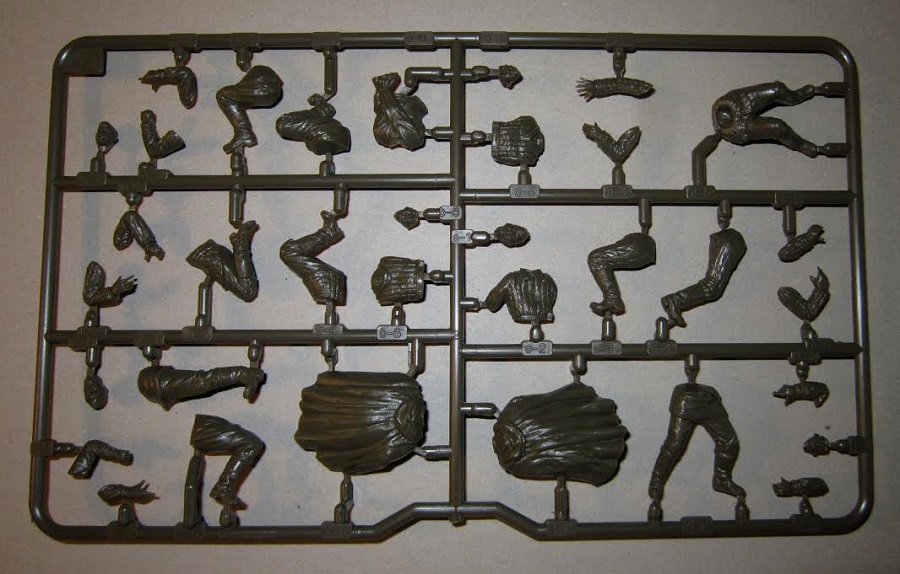 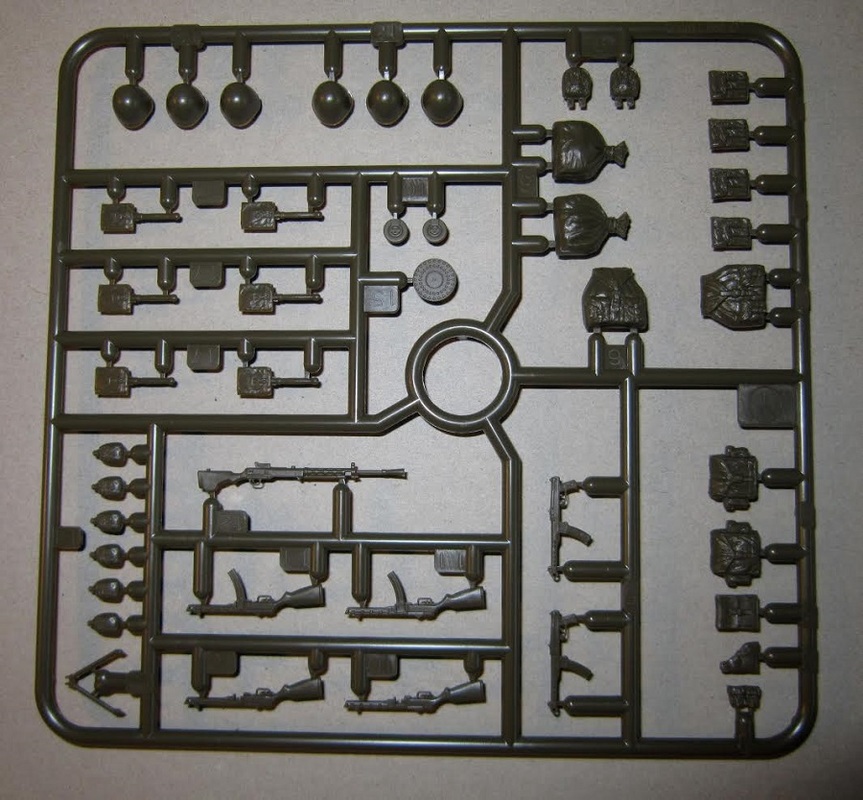 These are nice figures, well detailed and in good animated poses. Recommended.
Kit was courtesy of my wallet years ago.