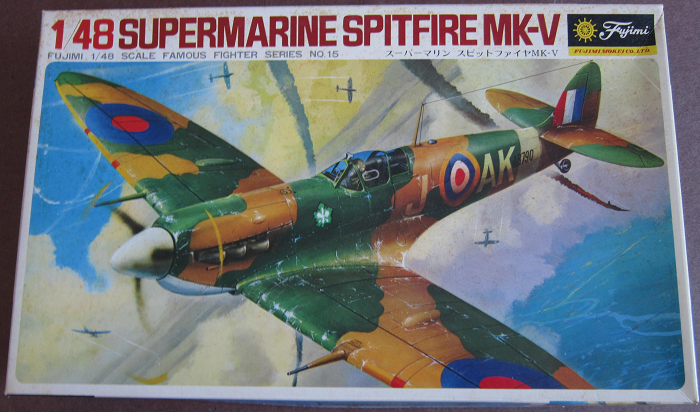 Kit no. 5A15
By Ray Mehlberger

The Supermarine Spitfire is a British single-seat fighter aircraft used by the Royal Air Force and other Allied countries before, during and after World War II. Many variants of the Spitfire were built, using several wing configurations, and it was produced in greater numbers than any other British aircraft.

It was also the only British fighter produced continuously throughout the war. The Spitfire continues to be popular among enthusiasts; about 54 remain airworthy, and many more are static exhibits in aviation museums throughout the world.

The Spitfire was designed as a short-range, high-performance interceptor aircraft by R. J. Mitchell, chief designer at Supermarine Aviation Works, which operated as a subsidiary of Vickers-Armstrong from 1928. Mitchell pushed the Spitfire's distinctive elliptical wing designed by Beverley Shenstone to have the thinnest possible cross-section, helping give the aircraft a higher top speed than several contemporary fighters, including the Hawker Hurricane.

Mitchell continued to refine the design until his death in 1937, whereupon his colleague Joseph Smith took over as chief designer, overseeing the Spitfire's development through its multitude of variants.

During the Battle of Britain, from July to October 1940, the public perceived the Spitfire to be the main RAF fighter, though the more numerous Hawker Hurricane shouldered a greater proportion of the burden against Nazi Germany's air force, the Luftwaffe.

However, Spitfire units had a lower attrition rate and a higher victory-to-loss ratio than those flying Hurricanes because of the fighter's higher performance. During the Battle, Spitfires were generally tasked with engaging Luftwaffe fighters—mainly Messerschmitt Bf 109E series aircraft—which were a close match for them.

After the Battle of Britain, the Spitfire superseded the Hurricane to become the backbone of RAF Fighter Command, and saw action in the European, Mediterranean, Pacific, and South-East Asian theaters.

Much loved by its pilots, the Spitfire served in several roles, including interceptor, photo-reconnaissance, fighter-bomber and trainer, and it continued to serve in these roles until the 1950s. The Seafire was a carrier-based adaptation of the Spitfire which served in the Fleet Air Arm from 1942 through to the mid-1950s.

Although the original air frame was designed to be powered by a Rolls-Royce Merlin engine producing 1,030 hp (768 kW), it was strong enough and adaptable enough to use increasingly powerful Merlins and, in later marks, Rolls-Royce Griffon engines producing up to 2,340 hp (1,745 kW). As a result, the Spitfire's performance and capabilities improved over the course of its service life.

Fujimi was a model company based in Japan.

The box art shows 3 Spitfires dog fighting with 2 Luftwaffe aircraft. One of the Luftwaffe planes is going down in flames.

The Spitfire Mk.V in the foreground is in a wave pattern of tan and dark-green over a light-gray undercarriage. It has a white spinner and fuselage band, a tricolor flash on the rudder. white fuselage code of J roundel Ak, followed by black serial no. AB790.

The first instruction sheet is all in Japanese. It is a single sheet that accordion-folds out into 8 pages in 7" x 10 1/2" page format.

The first page begins with a black and white repeat of the box art at the top, over the history of the Spitfire Mk. V in Japanese.

Pages 3 through 5 give a total of 7 assembly steps that are not numbered. Text is all in Japanese on these pages.

Page 6 has a 4 view line drawing showing where to place stencil marking on the aircraft, in both English and Japanese.

The first one is in the same color scheme as the box art subject. It has the white fuselage code of GM roundel A. It is a Mk. VB variant with no. 74 Sqdn. RAF, 1941.

The second one is also in the same color scheme it has a Polish national checkerboard insignia under the cockpit and a white fuselage code of T roundel WX with a black serial no. W3902 on top of the letter X and a yellow fuselage band. It is a Mk.VC variant with no. 302 Sqdn. R.A.F.

The third one again is in the same scheme. It ha the white fuselage code of AV roundel R, followed by black serial no. BM580 over a yellow fuselage band. It has the name "Olga" under the cockpit. It is a Mk.VB version with no. 121 Sqdn., R.A.F. 1942.

Below this is black and white cover arts of more Fujimi kits: a F-4E Phantom II, in 1/48th scale, a UH-18 Iroquois helicopter in 1/50th scale and a E-2A Hawkeye in 1/72nd scale. Again no kit numbers. Text next to these again is all in Japanese. Fujimi's telephone number is at the bottom of the page.

The second instruction sheet is also 7" x 10 1/2 " format. Printed on one side in color. The text on it is all in Japanese. It has profiles of 6 different Spitfires. 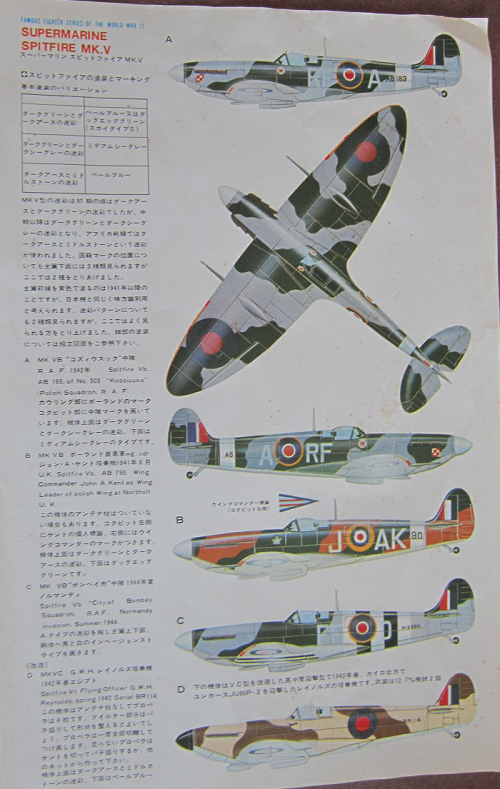 ​1. A spitfire in a wave pattern of dark-green and intermediate-gray over light gray undercarriage. It has a Polish national checkerboard marking on the sides of the cowling white fuselage code RF roundel A, a white fuselage band with black serial no. AB183 on it, a white spinner and tricolor flash on the rudder.

2. A Spitfire in the same wave pattern as the first profile. It has a checkerboard on the sides of the nose and another squadron mark that is under the cockpit. Fuselage code is Yellow A roundel RF. It has the black serial no. AB970 over the white fuselage band and it has the tricolor rudder flash.

3. A Spitfire that is in a wave pattern of sand and dark-green over a light-gray undercarriage. It has a white spinner and fuselage band. Fuselage code is J roundel AK with a black serial no. W3970 on top of the fuselage band. It has a logo of a green leaf with a white eagle on it under the cockpit and a tricolor rudder flash (this is the box art scheme).

4. A Spitfire that is in a wave pattern of dark-green and intermediate gray over light gray undercarriage. It has a white spinner. Invasion stripes around the rear of the fuselage and under the wings. Fuselage code is yellow FF roundel D, followed by black serial no. W3560 and a tricolor rudder flash.

5. A Spitfire that is in a wide wave pattern of sand and dark-green over a light-gray undercarriage. It has a black spinner, no fuselage code, tricolor rudder flash and black serial no. BR114 behind the fuselage roundel. 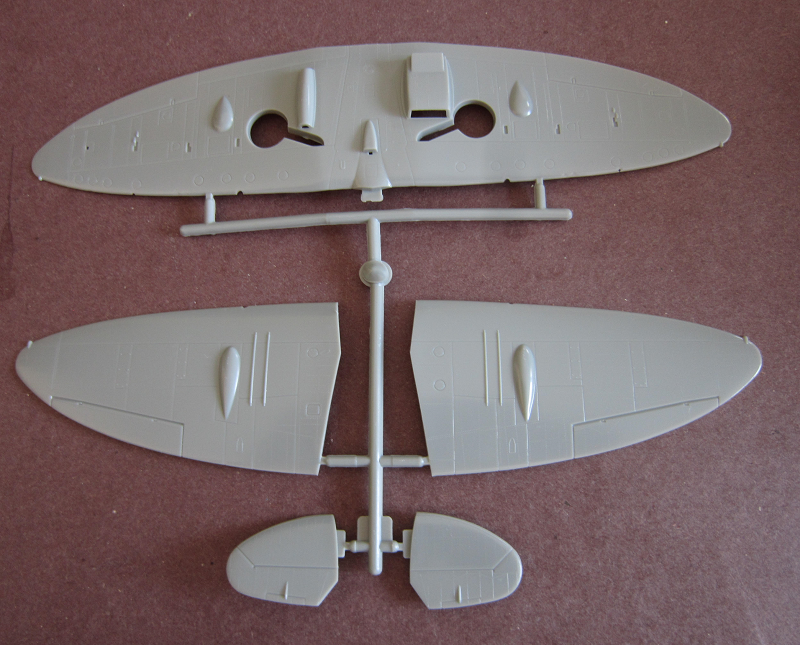 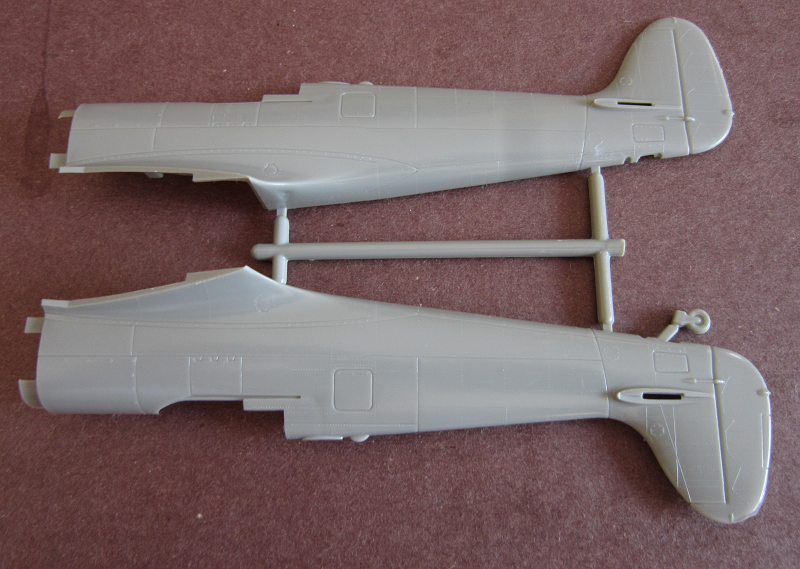 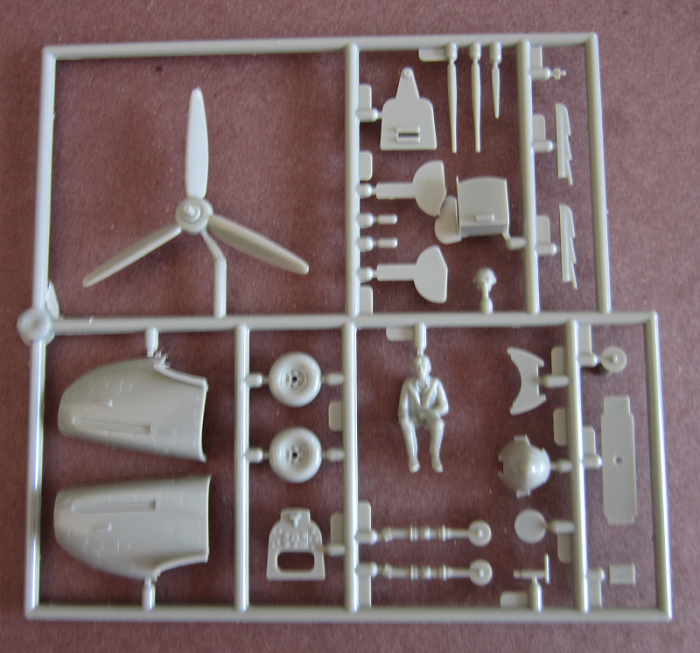 ​The clear part is just one piece and that is the canopy. 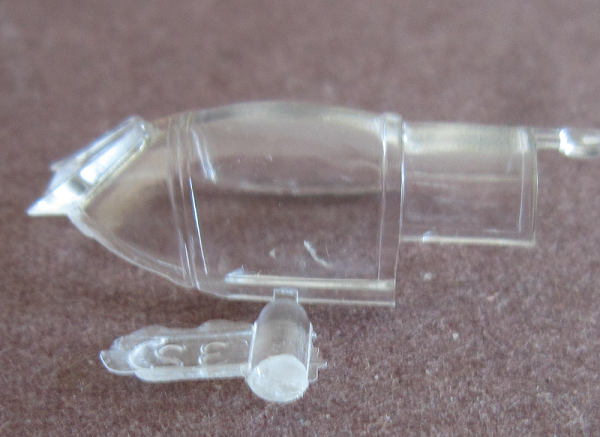 ​The decal sheet completes the kits contents. In addition to makings already mentioned it had small markings for the Turkish Air Force, the Czech Air Force and what I think is the Yugoslavia Air Force and a command pennant and stencil markings that have to be cut from a square. 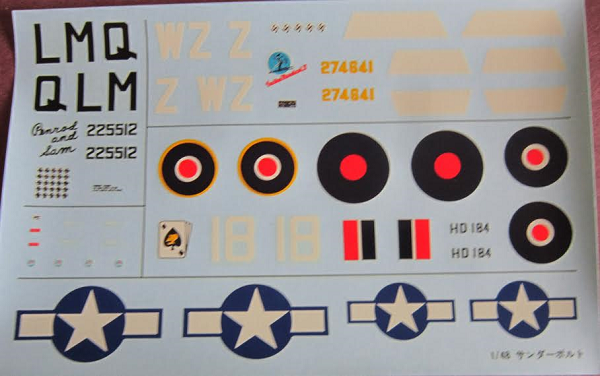