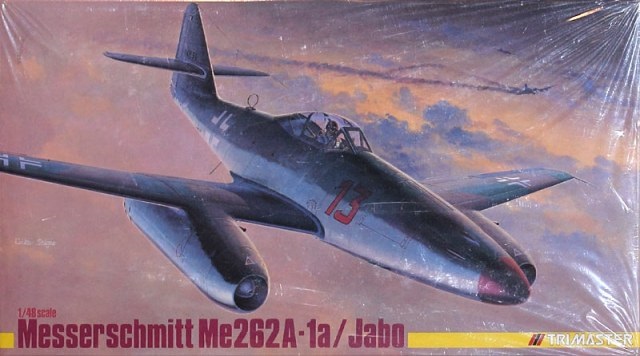 The Messerschmitt Me 262 Schwalbe (English: "Swallow") of Nazi Germany was the world's first operational jet-powered fighter aircraft Design work started before World War II began, but engine problems and top-level interference kept the aircraft from operational status with the Luftwaffe until mid-1944. Heavily armed, it was faster than any Allied fighter, including the British jet-powered Gloster Meteor.[6] One of the most advanced aviation designs in operational use during World War II, the Me 262 was used in a variety of roles, including light bomber, reconnaissance, and even experimental night fighter versions.

Me 262 pilots claimed a total of 542 Allied kills,  although higher claims are sometimes made. The Allies countered its potential effectiveness in the air by attacking the aircraft on the ground and during takeoff and landing. Engine reliability problems, from the pioneering nature of its Junkers Jumo 004 axial-flowturbojet engines—the first ones ever placed in mass production—and attacks by Allied forces on fuel supplies during the deteriorating late-war situation also reduced the effectiveness of the aircraft as a fighting force. In the end, the Me 262 had a negligible impact on the course of the war as a result of its late introduction and the consequently small numbers put in operational service.

While German use of the aircraft ended with the close of the Second World War, a small number were operated by the Czechoslovak Air Force until 1951. Captured Me 262s were studied and flight tested by the major powers, and ultimately influenced the designs of a number of post-war aircraft such as the North American F-86 Sabre and Boeing B-47 Stratojet..  A number of aircraft have survived on static display in museums, and there have also been several privately built flying reproductions.

Trimaster was a model company based in Japan years ago. After they went out of business most of their molds went to DML Dragon and a few to Italeri. DML later did other versions of the 262. One was a 2 seat version, another was a torpedo carrier, one was with the big cannon in the nose and there was one that sat atop of a drone aircraft.

The kit came in a shrink wrapped tray and lid type box. The box art showed a Me-262 attacking a formation of B-17’S, one of which is going down in flames.

It has a nose in black and white skeletal German crosses on the fuselage sides and above the wings. A red fuselage number 13 is just forward of the wind screen on the sides. It has black crosses with white outlines under the wings.

This aircraft was flown by Oberstlieutnant Heinz Bar with III/EJG 2 unit.

One side panel of the box has 3 color walk-around type photos of the model made up and 1 photo of the pilot, ground crew man and the bombs and rockets in the kit. This is followed by Trimaster’s street address in Japan, the copyright for the kit of 1989 and MADE IN JAPAN.

The other side panel has illustrations of the decal sheet, white metal parts, steel PE frets and the black vinyl tires in the kit, followed by a one-paragraph history of the 262 in 6 languages, including English

The instructions accordion fold out into 8 pages.

Page 1 of the instructions begins with a black and white photo of the model made up in the box art scheme, followed by the history of the aircraft in 6 languages, including English.

Page 2 begins with the first 2 assembly step drawings. None of the steps are numbered. This is followed by CAUTION about the kit and a international assembly symbol explanation in the 6 languages.

The bottom half of the page has not less than 22 paint colors suggested to use to complete the model. However, no hobby paint brands for these are mentioned.

There are a lot of assembly steps illustrated over pages 3 through 7. They are NOT numbered and  I am not sure just how many total there are, but it appears to be 50+ ??

The bottom of page 7 has 3 other decal sheets that Trimaster marketed for the 262. They are really LOADED with markings. I am amazed that there are that many markings for 262’s.


Page 8 is the parts trees illustrations and the decal application instructions. Trimaster’s street address, telephone and FAX numbers in Japan are supplied. The copyright date of 1990 for the kit is shown and the instructions were printed in Japan.

The single sheet in the kit has a 6-view illustration on one side that is the box art scheme (already described above).

The other side of this sheet has another 6-view of a 262 with 11/JG7 unit. It is in a camouflage of RLM 81 & RLM 82 above a RLM 76 undercarraige. It has a logo of a shield with a leaping greyhound dog just forward of the windscreen on the sides, a yellow fuselage number 7, white skeletal crosses on the sides and wing tops and a red and blue fuselage band just in front of the tail with a white vertical bar in the center of it.

Grey letter A parts tree holds: the fuselage halves, engine necelles etc. (19 parts) Two parts are blued out in the parts tree illustrations as being excess and not needed to complete the kit. 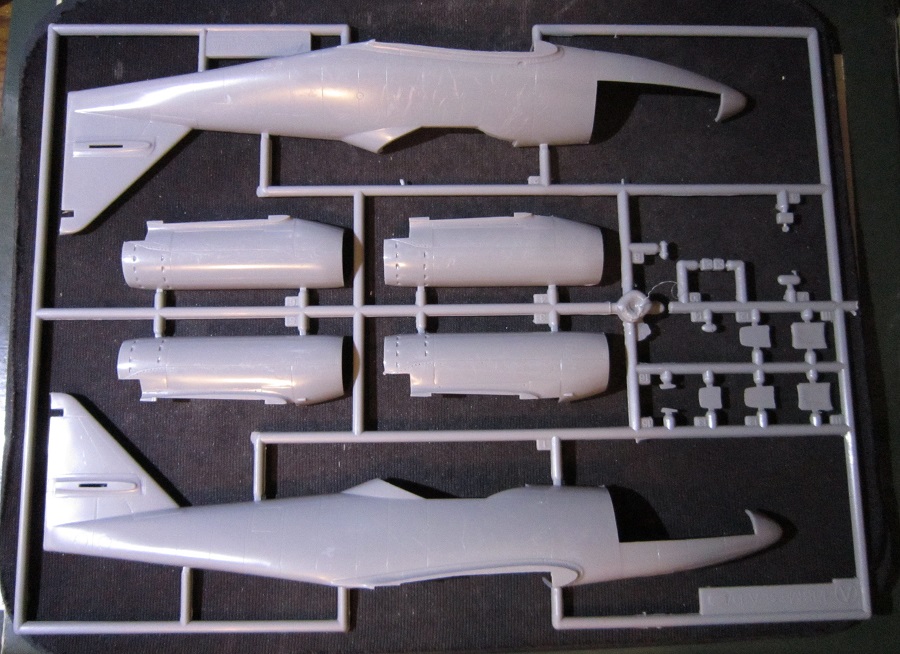 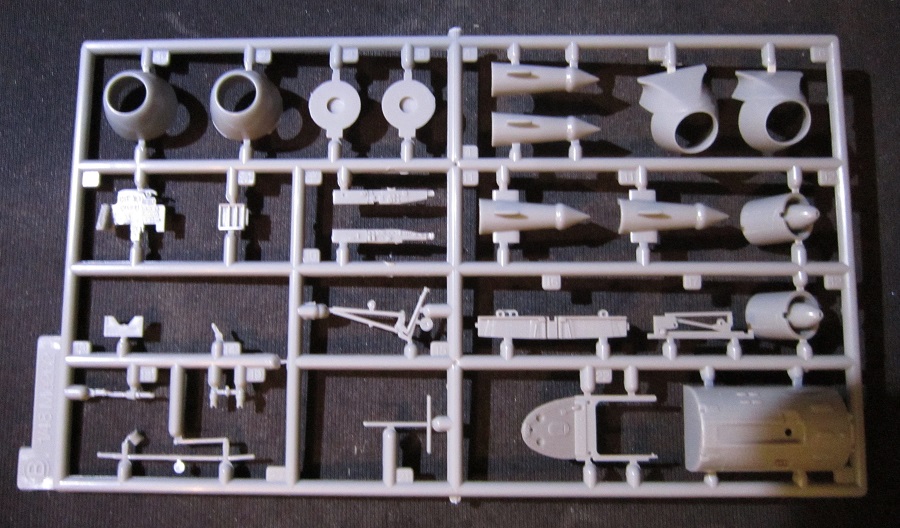 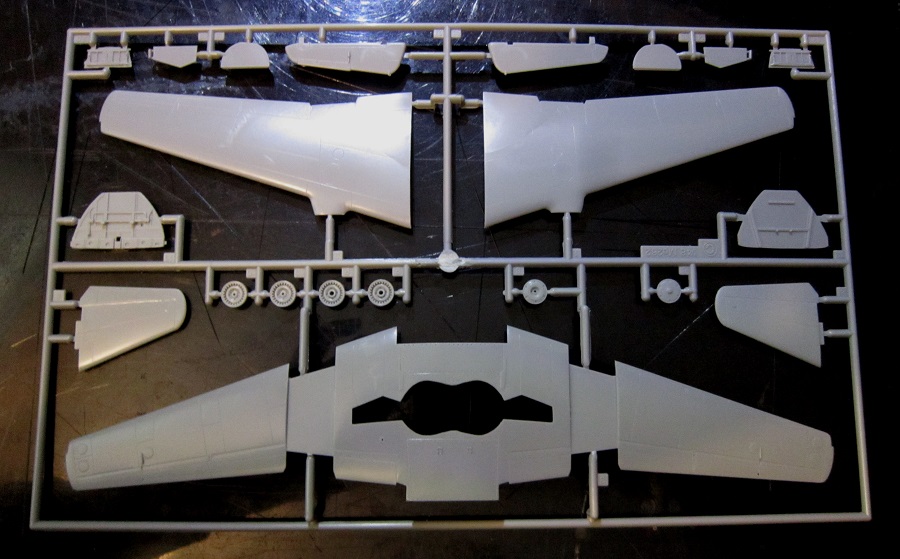 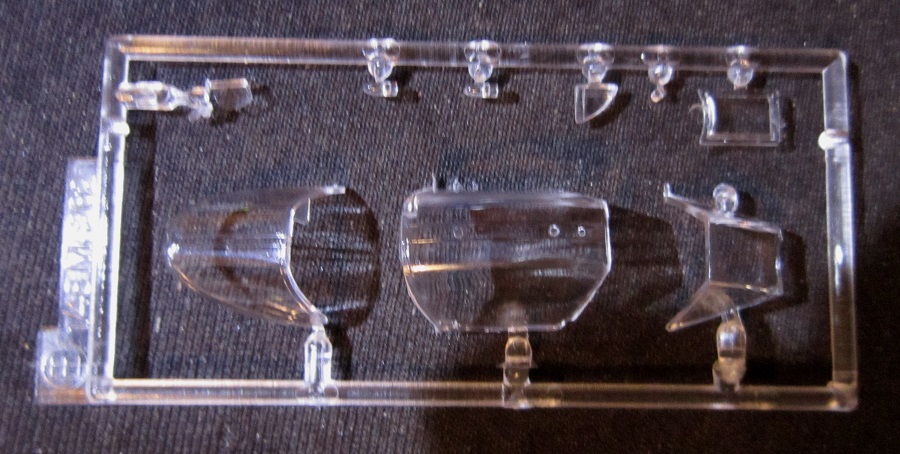 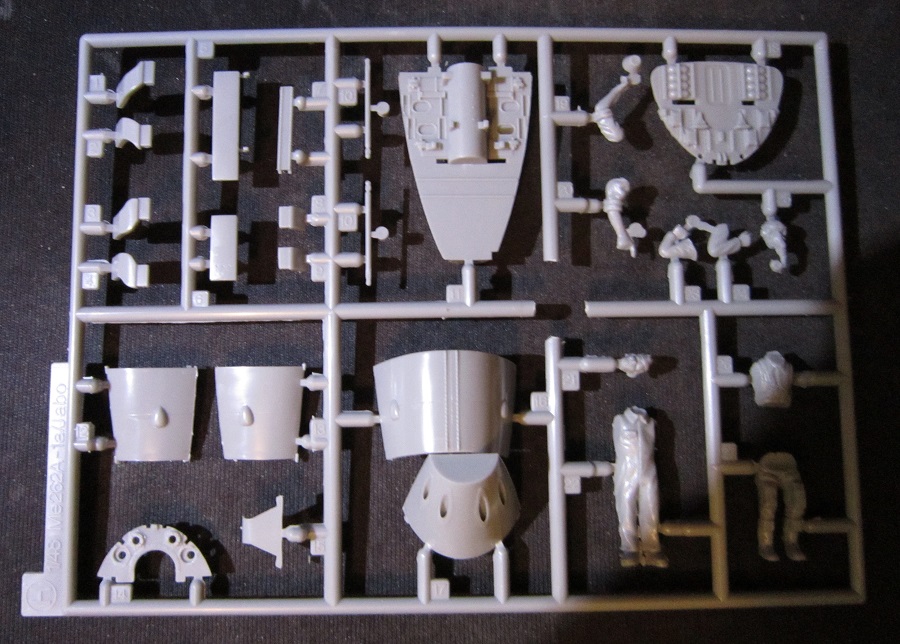 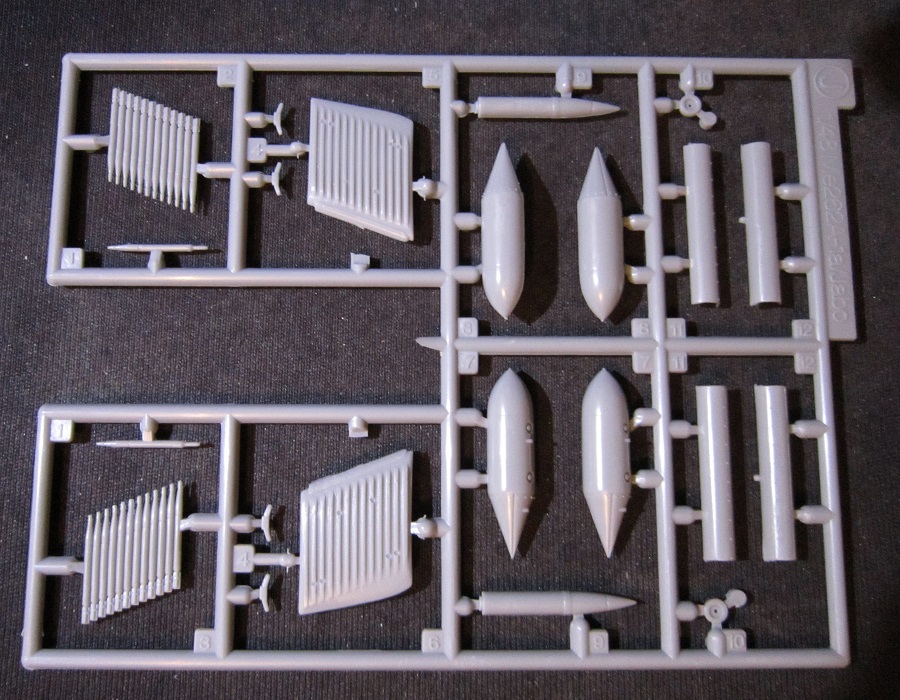 The 17 white metal parts include: landing gear legs, 4 nose guns with separate ammo loading doors (2 of these are extras), 2 large and 2 small wing mounts for the bombs, pilot seat etc. 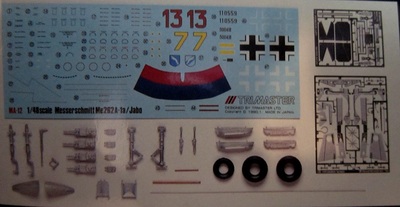 I purchased an additional decal sheet for this model by Ministry of Small Aircraft Productions, set no. 4803. It has markings on it for 5 different 262’s and stencil markings. Swastikas are in 3 types, all black, all white and black stenciled. 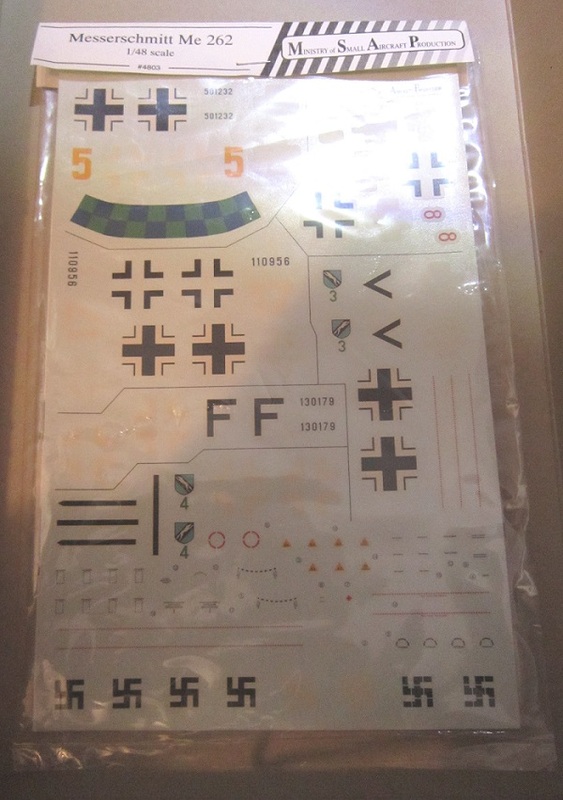 I highly recommend this kit to modelers of advanced building skills that have other multi-media kits under their belts of this complexity.


I purchased my kit at my local hobby shop 26 years ago.