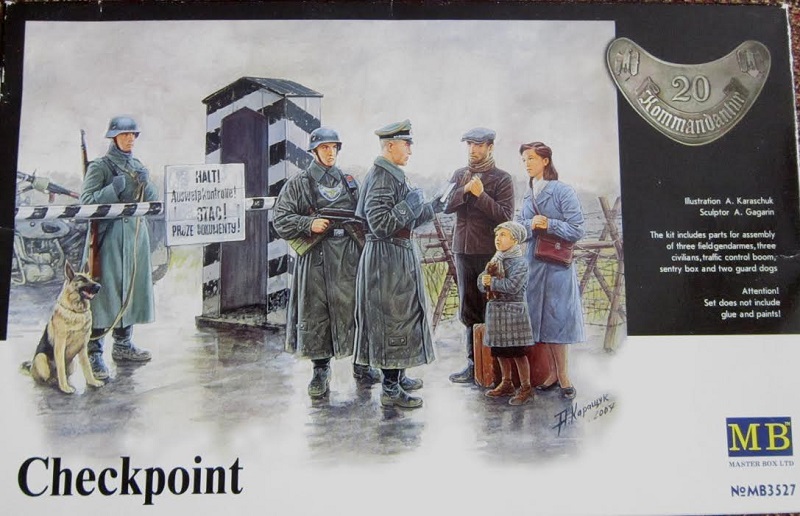 Master Box Ltd. Is a model company based in the Ukraine.

This kit comes in a shrink-wrapped end opening type box. I am no fan of this type of box, as PE frets and decals or other parts seem to find their way past the end flaps to become lost. Give me a tray and lid type box any day of the week.

The box art shows 2 German field gerndarmes and an officer by a sentry box and traffic control boom. The officer is checking papers of a civilian man, his wife and daughter.

One gerndarme has a seated German shepherd dog on a leash. He wears a long grey overcoat, steel helmet, black jack boots and has a 98k carbine slung over his right shoulder.

The other gerndarme standing behind the officer is dressed the same way. He is armed with a MP-40 machine pistol and has the gerndarme metal gorget slung from a chain around his neck on the front of his chest.

The officer is dressed also the same, but with an officer’s peaked hat on his head.

The civilian man wears a blue peaked cap, tan scarf, black jacket and pants and jack boots. He has his hands folded in front of him.

The woman wears a white scarf, blue overcoat, has a brown purse on her arm and black shoes.

There is a suitcase on the ground between these civilians.

Behind them all is a wood pole and barbed wire fence (not included in the kit). The traffic control boom has a white sign attached to it with black lettering in German and some other language. I don’t know what either says?? (this sign is not in the kit also).

Behind the gendarme with the dog and the traffic boom is a motorcycle with side car and machine gun visible (this also is not in the kit).

One corner of the box art has an illustration of the gendarme gorget.

The box art was illustrated by A. Karashuk and the sculpting of the kit was by A. Gagarin.

The box art says that the kit includes parts for assembly of three field gendarmes, three civilians, a traffic control boom, a sentry box and 2 guard dogs. The set does not include glue or paints.

One side panel says “When working with glue and paints observe due precautions.  Avoid vapors. Work in well ventilated room. Avoid material getting into eyes, mouth as well as skin exposure. Should contact with eyes occur, immediately wash out with water and consult the doctor immediately!

Only for collectors over 14 years old! Warning! Small parts! It is recommended to store construction set and accessories in a place beyond the reach of children before 3 years age and domestic animals! This is said in English, Ukrainian and Russian each marked with a color illustration of the flag of the country that speaks the language.

The other side panel says all this again in German with the flag of Germany. This is followed by three small color box arts of other figure kits that Master Box Ltd. Markets: “Bailout” Russian Tank Crew, Kursk, 1943, kit no. MB3532, Soviet Tankmen 1943-1945, kit no. MB3535 and Russian Infantry, Kursun-Shevchenkovskiy, 1944, kit no. MB3529.

The bottom of the box serves as the assembly and painting instructions. It is in full color. A listing of Vallejo, Tamiya, Lifecolor, Humbrol and Agama brands of hobby paints is suggested to use to complete the kit. 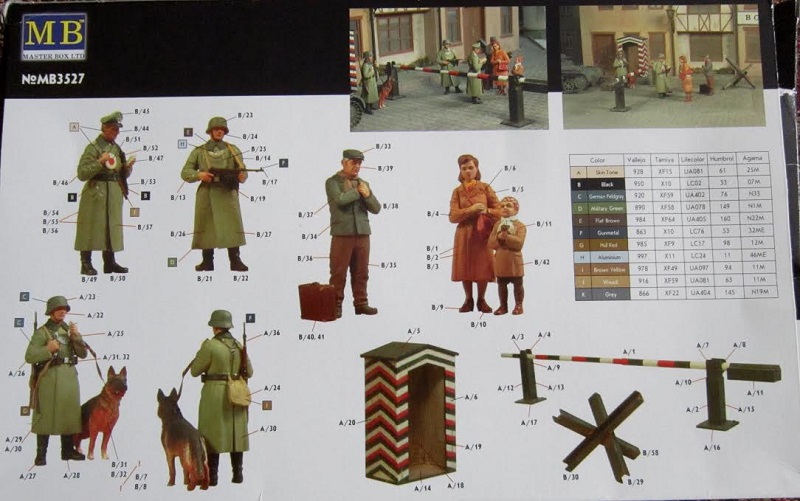 Two color photos of the diorama made up are in one corner. Building fronts, a cobblestone street, some wood crates and a Pz.Kpfw. I were used in this diorama, but are NOT in the kit.

The kit contains 2 tan trees of parts in a sealed cello bag and a sheet with parts trees illustrations on one side of it. These illustrations have part numbers next to the parts shown and the trees are alphabetized in the drawings. However, the actual trees have no part numbers molded on them next to the parts, nor any indication of being alphabetized.

That means constant referral to this drawing to get the correct parts for assemblies of things. Bad move Master Box Ltd.!

The tan tree labeled as being letter A on the illustrations holds: parts for the sentry box, the traffic control boom and the gendarme with the dog. He is divided into separate head, torso, arms, legs, front and back of his overcoat, steel helmet, canvas pouch, 98k carbine, canteen, gas mask canister, ammo pouches and a bayonet in a scabbard. (36 parts) 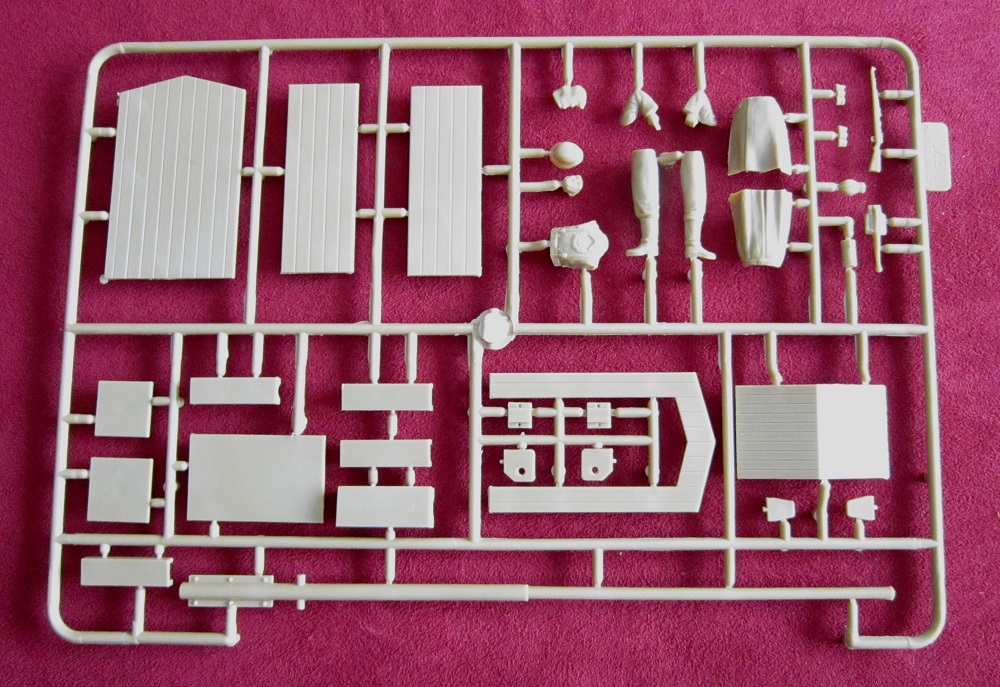 The tan tree labeled as being letter B on the illustrations holds: a steel girder anti-tank obstacle parts, a standing and a seated German shepherd dog and the rest of the figures. 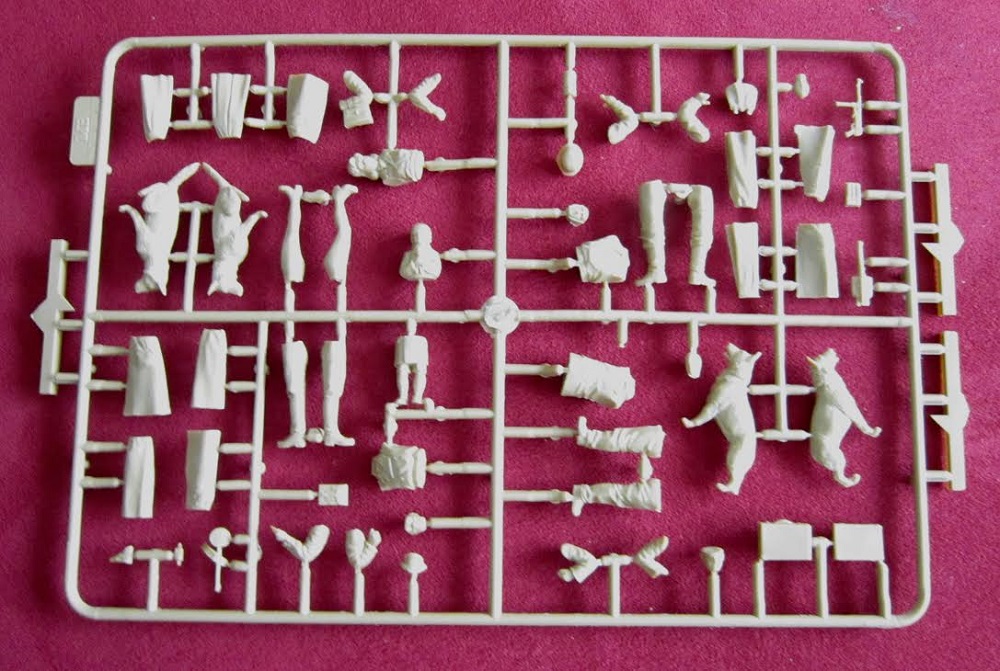 The male civilian is divided into separate head, torso, arms, legs and a cap. The suitcase is on this tree. The dogs are divided into two halves.

The civilian woman is divided into separate joined head and torso part, arms (one with purse attached), legs and coat panels.

The little girl is divided into separate upper and lower body halves, with here arms holding the teddy bear molded into her. (57 parts on this tree)

This is a great instant diorama kit. Highly recommended. I consider it a little over-priced though.