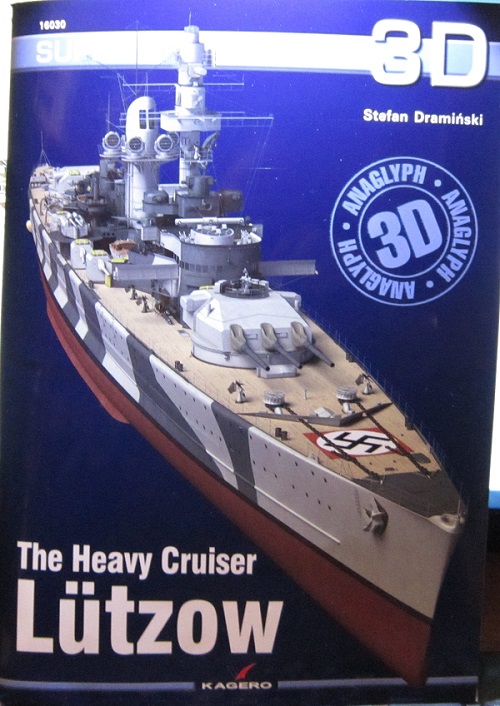 Review of The Heavy Cruiser Lutzow

Deutschland was the lead ship of her class of heavy cruisers (often termed a pocket battleship) which served with the Kriegsmarine of Nazi Germany during World War II. Ordered by the Weimar government for the Reichsmarine, she was laid down at the Deutsche Werke shipyard in Kiel in February 1929 and completed by April 1933. Originally classified as an armored ship (Panzerschiff) by the Reichsmarine, in February 1940 the Germans reclassified the remaining two ships of this class as heavy cruisers.[a] In 1940, she was renamed Lützow, after the Admiral Hipper class heavy cruiser Lützow was handed over to the Soviet Union.

The ship saw significant action with the Kriegsmarine, including several non-intervention patrols, during which she was attacked by Republican bombers in the Spanish Civil War. At the outbreak of World War II, she was cruising the North Atlantic, prepared to attack Allied merchant traffic. Bad weather hampered her efforts, and she only sank or captured a handful of vessels before returning to Germany. She then participated in Operation Weserübung, the invasion of Norway. Damaged at the Battle of Drøbak Sound, she was recalled to Germany for repairs. While en route, she was torpedoed and seriously damaged by a British submarine.

Repairs were completed by March 1941, Lützow returned to Norway to join the forces arrayed against Allied shipping to the Soviet Union. She ran aground during a planned attack on convoy PQ 17, which necessitated another return to Germany for repairs. She next saw action at the Battle of the Barents Sea with the heavy cruiser Admiral Hipper, which ended with a failure to destroy the convoy JW 51B. Engine problems forced a series of repairs culminating in a complete overhaul at the end of 1943, after which the ship remained in the Baltic. Sunk in the Kaiserfahrt in April 1945 by Royal Air Force (RAF) bombers, Lützow was used as a gun battery to support German troops fighting the Soviet Army until 4 May 1945, when she was disabled by her crew. Raised by the Soviet Navy in 1947, she was subsequently sunk as a target in the Baltic.

The text part of this book describes technical specifications of the ship and her operational history in detail. This is accompanied by more than 100 color illustrations showing Lutzow's appearance during Operation Rösselsprung, July 1942. Elements that are shown in detail include armament, rangefinders, radar, searchlights, catapult with aircraft, etc. Blueprints in 1:350, 1:200, 1:100 and 1:50 scales (general views and details) are included on a separate sheet.

The book is labeled as being 3-D or 3 dimensional. There is a set of glasses inserted in the book with one blue and one red lens, like you wore to 3-D movies back in the 60’s. I have looked at the illustrations in the book through these glasses and for the life of me cannot see the illustrations jump up from the page.

This publication will be an invaluable help to any modeler working on a model of this ship, especially to get colors correct.

This book shows every inch of the Lutzow’s anatomy in the color illustrations and will be of great value to modelers of this ship and naval enthusiasts too. Very highly recommended.

Heller brand has over the years released and re-released a model of this kit in 1/400th scale.

Later that same year it was re-released as kit no. 801 with new decals.

In 1912 it was re-released again with the same kit numbers as in the 1990’s with just box art changes each time.

I have not found any other brand of model kits that does a Lutzow.

I want to thank Casemate who sent me this review copy and the folks at Kagero.