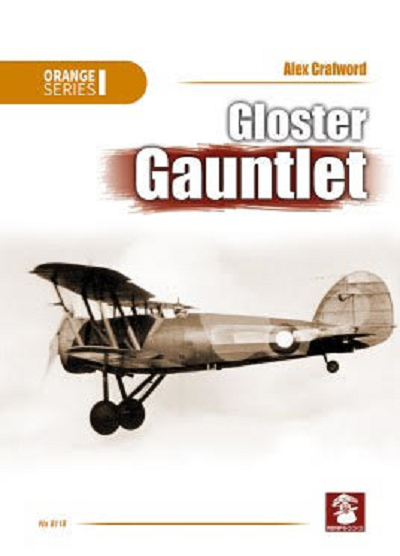 The Gloster Gauntlet was a British single-seat biplane fighter of the RAF, designed and built by Gloster Aircraft in the 1930s. It was the last RAF fighter to have an open cockpit and the penultimate biplane fighter in service.

The Gloster S.S.18 first flew in January 1929. The Gauntlet was a development of the Gloster S.S.19B design, which originally mounted six machine guns (four in the wings and two in the fuselage), the original S.S.19 prototype being re-engined with a Bristol Mercury VIs engine, first flying in this form in 1933. On testing the S.S.19, the Air Ministry placed an order for 24 aircraft in September 1933, to be named Gauntlet.

The order was followed up with more for the revised Gauntlet Mk. II. This new model used a revised construction method based on that used by Hawker following Hawker's takeover of Gloster, as this was much easier to build and repair than Gloster's welded structure. A total of 204 Mk IIs were produced in the UK.

Mushroom Model Publications (MMP) is based in the UK. All their books are printed by their associate Stratus in Sandomierz, Poland in English. Stratus also publishes their own line of books in both Polish and English.

The cover art shows a Gauntlet in 1940 with the Dutch Air Force. It wears the two tone camouflage of dark greyish green and ocher with pale blue-gray undercarriage. The Danish flags have still to be added to the fin rudder.
​There are 28 color photos of a restored to flying condition Gauntlet in Finish markings. Four of the photos show the aircraft in flight and the rest are the walk-around type.

It is in a base of green with black wave pattern and a yellow cowling. and a light-gray under carriage. It has a white OH-XGT on the sides of the rudder, a black fuselage code of GT-400 and blue swastikas on white circles above the wings and on the fuselage sides.
​The book is a complete and comprehensive history of the development and services of the aircraft.

There are 1/72nd scale line drawings included: three 4-views, a side view and three 3-views.

There are 39 rare black and white archive photographs.

This will be essential reading for aviation enthusiasts and scale aero modelers alike.

I want to thank Casemate Publishing, the North American distributor of MMP books for this review sample and also Roger Wallsgrove, Editor-in-Chief of MMP for this book sample.
​
All MMP titles can be viewed on Casemate's web site at:
www.casematepublishers.com
​
or
www.mmpbooks.biz