Kit no. F176
By Ray Mehlberger

The design was very advanced, but lacked refinement, much to the dismay of crews and maintenance personnel - and of Stalin, who pointed out that "there are no trivialities in aviation".

Numerically the most important bomber in the world in the late 1930s, the SB was the first modern stressed-skin aircraft produced in quantity in the Soviet Union and probably the most formidable bomber of the mid-1930s.

Many versions saw extensive action in Spain, the Republic of China, Mongolia, Finland and at the beginning of the War against Germany in 1941. It was also used in various duties in civil variants, as trainers and in many secondary roles.

Successful in the Spanish Civil War because it outpaced most fighters, the aircraft was obsolete by 1941. By June 1941, 94% of bombers in the Red Army air force were SB-2’s.

The SB-2 was one of the most advanced bombers of it’s time. It entered service with the Soviet Air Force early in 1936 and shortly afterwards some squadrons were sent to Spain to aid the Republican government and to train crews under operational conditions.

In WWII, they were the early mainstay of the Russians, but rapidly became outclassed by the more up-to-date German fighters.
​THE KIT:

This kit is an ex-Frog mold. Frog used to be based in the UK. When they went out of business, their molds went to NOVO in Russia.

The kit came in a tray and lid type box held shut with tape.

The box art shows an SB-2 on a night-time bombing mission, with explosions below it. It is mounted with ski landing gear.

It is in a scheme of dark green above pale blue-gray. It has a matt white rudder with a red star on it. The forward part of the tail has the number 2 in red outlined in yellow. Red stars are above and below the wings.

This is one of the markings included on the decal sheet in the kit, where it says that this plane served on the Finish Front in 1940.

Side panels tell the kit’s features in 8 languages, including English.
​WHAT'S IN THE BOX:

Inside the box is a large un-sealed cello holding all the dark green parts, the clear parts, the decal sheet and the instructions.

The instructions consist of a single sheet that accordion folded into 8 pages. Then the bottom of the sheet is further folded upwards 1/3d of the sheet.

The first page begins with NOVO’s logo, followed by the name of the aircraft: Tupolev SB-2 “Katyuska” Bomber and the word INSTRUCTION LEAFLET in 8 languages, including English.

The folded up bottom of this sheet has the first 6 instruction steps.

In step 3, you opt for either a 2-bladed or 3-bladed propeller. Also, on this area is instructions to paint the red stripes for the Spanish scheme, followed by 4 international assembly symbol explanations.

After folding this section open a balance of a total of 12 assembly steps is revealed.

Steps 7 & 8 are for the option of doing the ski type landing gear.

Step 9 is for the option of the wheeled gear.

Step 11 shows illustrations of how to put either of these gear arrangements into the wheel wells.

Step 12 shows the option of having the rear gunners canopy open or slid forward and open.

There are no parts tree illustrations on these instructions.

However, smaller parts on 4 trees have the part numbers molded next to them. This means that modelers will have to try and identify parts shown in each step on the trees. Bad move NOVO.

I also found broken and bent parts in my kit and rather heavy flash on one tree.

One landing gear door and the clear cockpit canopy had also broken off their trees.

The wing halves and fuselage halves are all loose in the kit.

Panel lines are all of the raised variety on these parts.

The first one holds: one 2-bladed propeller, one aileron, elevator halves, ski halves, horizontal tail surface halves, wheel halves, one ski strut and Pitot tube.(21 parts) It also holds 4 bomb halves, which the second tree like it, below, does not.
​The second dark green parts tree holds all the same parts as above, but it also includes 4 engine access doors and the tail wheel. (22 parts) This tree is heavy with flash and the 2-bladed propeller is warped. 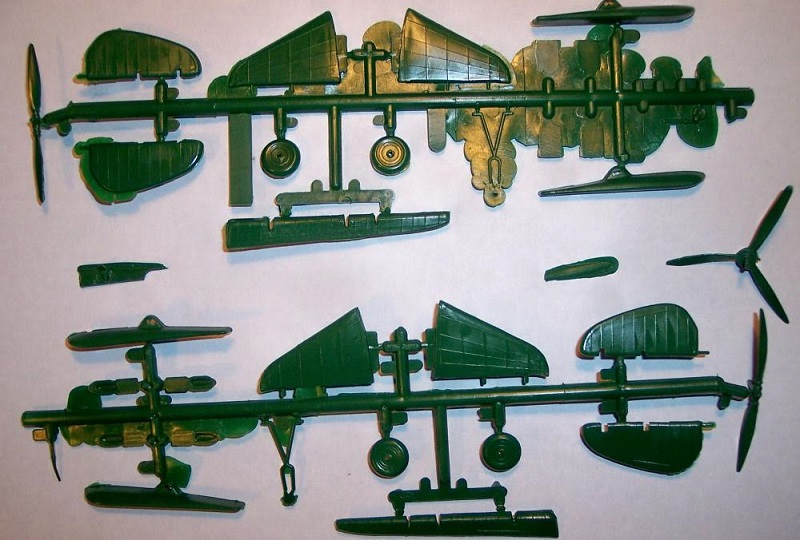 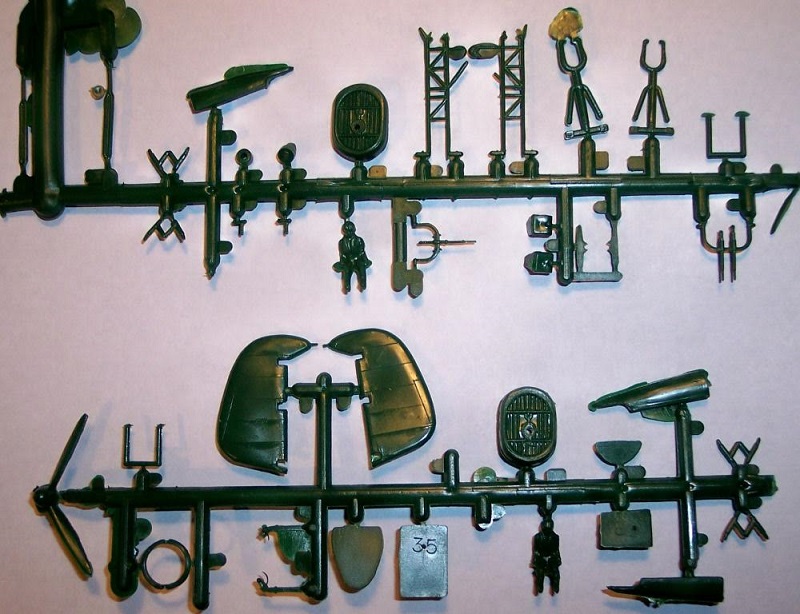 The upper and lower wing halves. 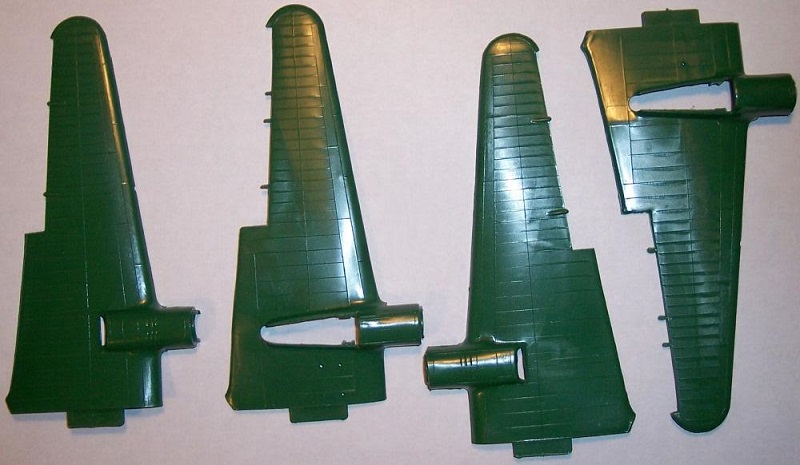 ​The final parts tree is the clear one. It holds: the nose transparency, the cockpit canopy (that had broken off this tree) the gunner’s canopy, a square window that goes in front of the cockpit on top of the nose and 2 triangular windows that are not shown used anywhere on the instructions, so are excess (6 parts)

​The decal sheet is next. 3 schemes are shown on the bottom of the kit’s box tray.

1. Is the boxart scheme, already described above

2. Is a SB-2 (known as a B-71 in Czech service) of the Czechoslovak Air Force 1938. It is
dark green above matt pale blue-gray. It’s rudder is matt medium green with the Czech 3-segmented roundel marking of red, white and blue. There is a unit marking of a red rampant lion on a white square on the sides of the fuselage just behind the wings, followed by the letter code K3 in black. The roundels are repeated above and below the wings

3. Is a SB-2 flown by the Spanish Republican Air Force, 1938. It is in dark green above matt pale blue. It’s rudder is red brown with orange, yellow black horizontal stripes (reading from top to bottom). Forward of this on the tail is the yellow numeral 1. The fuselage has a wide red band around it just behind the wings. Red bands also surround the wings, top and bottom, near the tips. These bands are NOT on the decal sheet and modelers are told to paint them on in the instructions

By and large, these decals are okay. However, the Soviet red stars are out of register and need to be replaced from an after-market sheet. 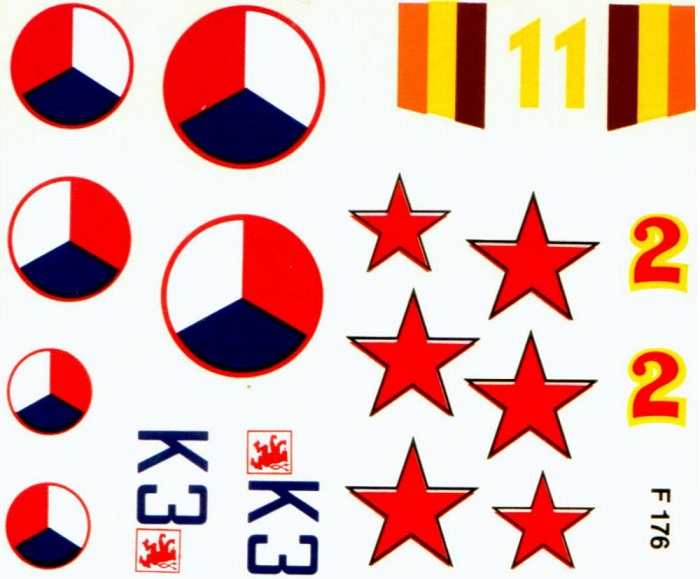 This kit is over 30 years old now.

The molding of it suffered in the hands of NOVO. The original FROG moldings did not have all the flash that is evident in this kit now. Nor was there the warping of some parts.

Modelers today may not like the raised detail, however it is nicely done.

I am not aware of anybody else doing this particular aircraft subject in 1/72nd. So, it may well be the only show in town. With some loving care it can be built up into a nice display.
​I got a number of this kit from a modeler in Poland that I once traded kits with years ago.