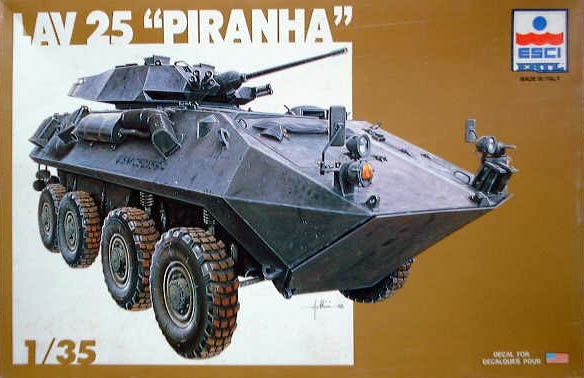 Years ago, Ertl in Dyersville Iowa produced a lot of aircraft and armor kits using Esci molds. Esci was a model company based in Italy. This cooperation between the two companies lasted only a few years and then production at Ertl ceased of these plastic model kits.

The LAV-25 (Light Armored Vehicle) is an eight-wheeled amphibious reconnaissance vehicle used by the United States Marine Corps and Canadian Army. It was built by General Dynamics Land Systems Canada and is based on the Swiss MOWAG Piranha I 8×8 family of armored fighting vehicles.

During the 1980s, the US Marine Corps began looking for a light armored vehicle to give their divisions greater mobility. They chose the Light Armored Vehicle (LAV) based on the MOWAG Piranha. It entered service with the Marines in 1983. The U.S. Army was interested in these vehicles at the time, but did not order any (although they did later with introduction of the Stryker family of vehicles). The USMC ordered 758 vehicles of all variants. LAVs first saw combat during the Invasion of Panama in 1989, and continued service in the Gulf War, Iraq War, and the War in Afghanistan.[4]

The LAV platform is planned to remain in service with the Marine Corps until 2035.[6]

The LAV-25 is due to be replaced with the Marine Personnel Carrier, which was to arrive no earlier than 2015.

Powered by a 6V53T Detroit Diesel turbo-charged engine, they are 4-wheel drive (rear wheels) transferable to 8-wheel drive. These vehicles are also amphibious, meaning they have the ability to "swim", but are limited to non-surf bodies of water (no oceans). While engaged in amphibious operations, the maximum speed is approximately 12 km/h (7.5 mph) using equipped propellers. The current SLEP (Service Life Extension Program) modifications will hinder or eliminate amphibious ops.

Typical land speeds are approximately 100 km/h (62.5 mph) in either 4- or 8-wheel drive, however fuel economy decreases in 8-wheel drive. The vehicles operate on diesel fuel. They are equipped with a M242 Bushmaster 25 mm cannon, two M240 7.62 mm machine guns, and two 4-barrel smoke grenade launchers located on the forward left and right sides of the turret. The crew is three; vehicle commander (VC), gunner and driver, and four passengers (scouts) with combat gear.

. LAV-25[ Standard LAV fitted with a turret with 360° traverse, armed with an M242 25 mm chain gun with 420 rounds of 25 mm ammunition, both M791 APDS-T (Armour Piercing Discarding Sabot-Tracer) and M792 HEI-T (High Explosive Incendiary-Tracer), of which half is ready for use. One hundred fifty rounds are ready for use from one stowage bin, 60 from another stowage bin, the other 210 rounds are stowed elsewhere in the vehicle. A coaxial M240C machine gun is mounted alongside the M242, and a pintle mounted M240B/G machine gun, with 1,320 rounds of 7.62 mm ammunition, is mounted on the turret roof. The Canadian Army uses an upgraded version of this chassis for its CoyoteArmoured Reconnaissance Vehicle.

This kit comes in a shrink-wrapped tray and lid type box. The box art shows a LAV 25 in overall light olive green with the serial number USMC 521594 in black lettering on the sides of the hull. It has a tiny black star on the nose and the right rear fender. It is posed against an all white background, similar to how Tamiya does their box arts too. The side panels of the box and the ends repeat the box art only smaller.

Because I have this model totally built except for painting, decaling and weathering. I can’t remember for sure how many trees were in the kit. This is because I blacked out the part numbers in the instructions as I went along with the build to make sure I got all the parts needed each time. I am pretty sure it was just 5 trees of tan parts though. There are no clear parts nor crew figures. The decal sheet and the instructions complete the kit.

The instructions consist of a large sheet that is accordion folded into 6 pages in 8” x 19” page format. It is again folded along it’s 19” length again into fourths to fit the box.

Page 1 of the instructions begins with general specifications:

Armament: One 25 mm chain gun and one 7.62 mm machine gun in turret and another on top.

MADE IN USA is said, Next is “Warnings” and instructions about the kit in 7 languages, including English., a list of paint colors in the 7 languages along with their FS (Federal Specification) numbers. Humbrol brand paints are the ones suggested.

The bottom of the page has decal application instructions, again in the 7 languages.

Page 2 to 5 give a grand total of 5 assembly steps. Ertl’s P.O. Box address in Dyresville Iowa and the street address of their office in Don Mills, Ontario, Canada are provided to one side in step 5. It is said that the instructions were printed in the U.S.A.

Spread across the bottom of page 5 and 6 is a 4-view of a marking and painting scheme in overall light olive, with a small black star on the nose and right rear fender of the vehicle. You are to choose which of the 3 different serial numbers to use to add to the sides.

Care must be taken to get the right parts in each assembly step as there are no parts tree illustrations in the instructions.

In step one I assembled the suspension arms, axles, propellers and their shafts, rudders, wheel halves and jerry cans. 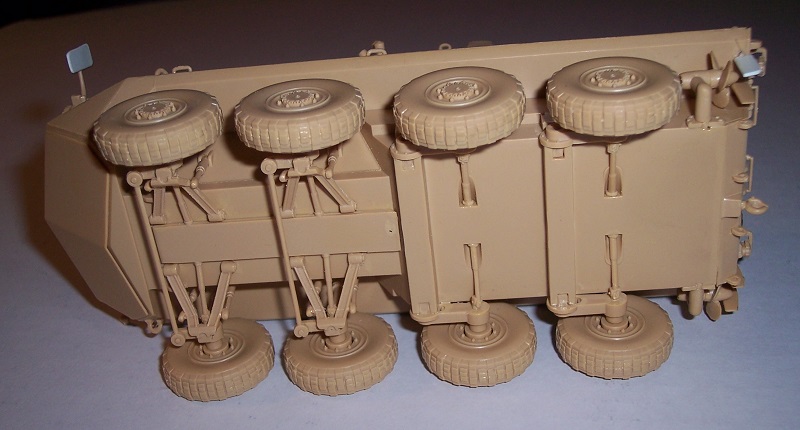 Step four was the turret assembly, vision ports, 3 antenna bases (antennas to be made from stretched sprue later), smoke candle launchers to sides of the turret etc.

Step five has you add the turret to the hull and other than painting, decaling and weathering you are now finished. (I still have to do these) 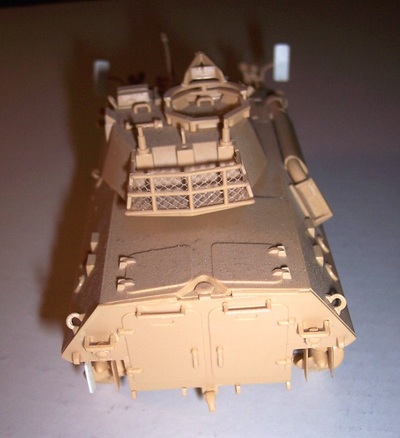 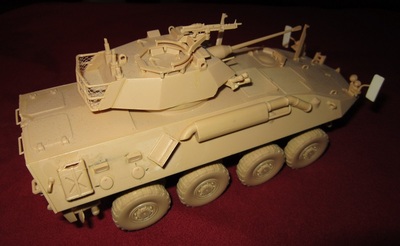 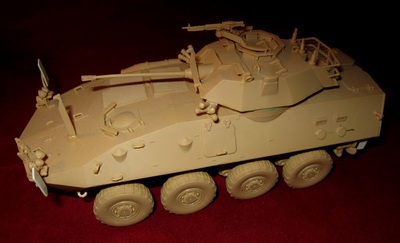 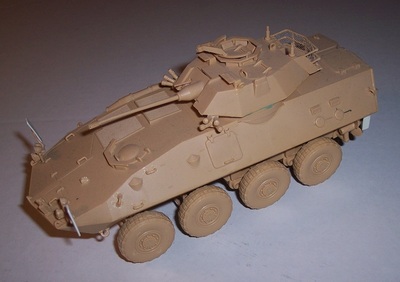 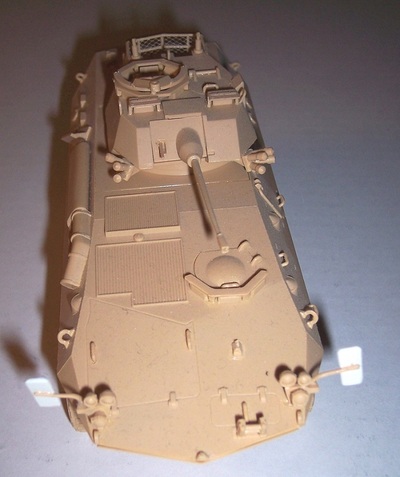 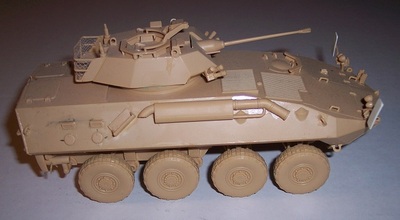 I bought my kit at the Ertl factory discount store back in the 90’s for a paultry 10 bucks. The kit is now long out of production, but Trumpeter makes a LAV 25 kit that is still around.

A fellow modeler on the web years ago told me what additions he made to his ESCI/ERTL LAV 25 kit to further accuratize it:

Add ammo can for the machine gun on top of the turret.

Modify the nose armor (he never said HOW)

Add periscope glass (from where?)

Add netting to the turret rear storage bin (done to mine)

Add a shield above the muffler (don’t know what this looks like??)

Add antennas (kit provides the base of 3 of these. Poles will have to be made with stretched sprue or wire)

I guess a person could even add more. Study of pictures of the real vehicle would have to be needed though.

I am not a big fan of modern armor and more a WWII buff or even WWI when it comes to model kits. I would gladly sell this model to anybody that would want a built up model of it.